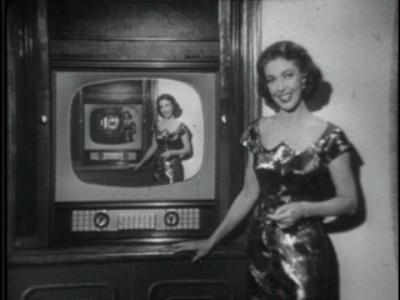 Amongst 1950s TV chestnuts, The Loretta Young Show was nothing if not consistent.

Sure, it may have undergone a title change (from Letter to Loretta) halfway through its first season, but most of the other elements for this anthology - hosted and performed by one of Classic Hollywood's great beauties - stayed firmly in place from the first episode (Trial Run, 1953) through to the last (Not In Our Stars, 1961). Fading in to an interior set, amidst a swirl of waltz-timed music, a door opens - and Loretta makes a grand entrance in a swanky, au courant gown. She does a little twirl, often tossing up the hemline of her dress with the flick of her left hand, and trots across the lavishly appointed living room before announcing the evening's fare in her best "I'm on my way to Bullock's Wilshire, but I thought I'd stop by and share this with you, my adoring public" voice. The introduction sets the tone for the uplifting, Reader's Digest-like morality tale that follows, one that usually has a plum role for our Loretta. Each episode then wraps up with Loretta reading a passage from the Bible or a piece of great literature, which further emphasizes the theme of the night's story. What became a weekly ritual for TV viewers of all ages then concludes with the innocuous tilt of Loretta's head and the plea: "Good night. See you next week?"

Although it's rarely broadcast these days, The Loretta Young Show serves as a fascinating look at how the film industry adapted to the emerging television medium. A 17-DVD box set in honor of Young's 100th birthday, endorsed by Loretta Young's children and put together by Timeless Media Group, amply showcases the versatility and energy that Young put into the show. Even for classic film fans who never thought of Young as much of an actress might be taken aback - if only by Young's unwavering determination (her three Emmy awards for this show must have come with a "Hardest Working Woman In Showbiz" certificate). Although the show was an unabashed vehicle for Loretta as host/actress in the first two seasons, exhaustion forced Young to step aside for half of the third season, which was guest hosted and performed by the likes of Barbara Stanwyck, Irene Dunne and Van Johnson (sadly, none of these episodes are present on this set - which is devoted to Loretta's best performances).

Once one gets past the those campy, strangely insincere introductory segments, The Loretta Young Show holds a lot of good, meaty episodes that are great examples of early dramatic TV. Some of the best stuff dates from the Letter to Loretta period, when one gets a sense of Young attempting to do the kind of virtuoso roles that were perhaps denied her in the film world. Second episode The Mirror is a particularly good example, with Young going from conceited to vulnerable as a socialite who finds herself trapped in her summer home with a deranged woman who escaped the nearby mental asylum - definitely her Sorry, Wrong Number moment. There's also a lot of fascinating historical drama here, with Young playing everyone from Charlotte Bronte to a Revolutionary War maiden, even Egypt's Queen Nefertiti. The stories are always compelling and, surprisingly, not too preachy. The only episodes that don't hold up well? The comedic ones. Never much of a funny woman to start with, the installments in which Young and company attempt overt laughs come across as broadly performed, failed sitcom pilots.

Lots of consistency and cozy familiarity are at play in The Loretta Young Show, too, since these episodes were produced by Loretta herself for the production unit (Lewislor Films) she founded with her second husband, Tom Lewis. The episodes were competently directed and scripted by a stable of friends of the couple from their film days, populated by reliable character actors and leading men who were solid yet generic enough not to steal attention away from Loretta's characters. Rather than stifling the show, however, one gets the sense that everyone involved was endeavoring to do their best. Even the later seasons, which show a trace of fatigue with the subject matter and stories explored, benefit from that professional finish. There had to be a reason to tune in every Sunday evening besides those fabulous dresses, after all.

One of the more amusing things about The Loretta Young Show to view (from a modern perspective, at least) comes from the differences between Host Loretta and Actress Loretta in each episode. It's a good bet that if you see an episode with Host Loretta particularly dressed up to the nines, the part she'll be playing as Actress Loretta will have her as humble and dressed-down as possible. Take season Three's episode The Pearl, for example, with Loretta in lacy bodice and gigantic gold medallion pendant transports the viewer to a story about a poor Japanese fisherman's wife who comes across the rare and valuable pearl that he's been hiding from her. As campy as it sounds, the episode is actually a beautifully paced, subtle half-hour with some notable work from Young and her Asian co-star, Teru Shimada. 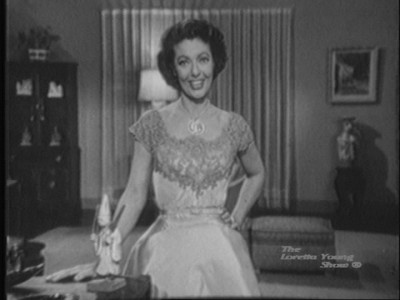 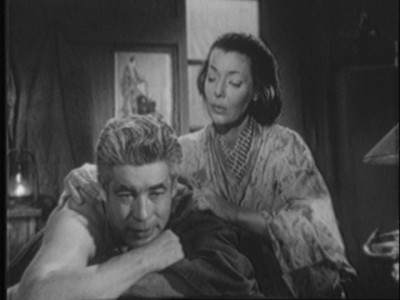 One thing to keep in mind while viewing these DVDs is that they are not the original broadcast films (which have apparently been destroyed), but later syndicated copies with updated graphics, i.d. bugs and copyright info added in. Despite the inherent flaws in the presentation, it's a nicely put together set that highlights Loretta's contributions to the show in all eight seasons. The packaging doesn't include original airdates, plot synopses, or cast and crew credits, but there's a lot to enjoy for Loretta Young fans. The episodes on this set are arranged in roughly chronological order as follows: 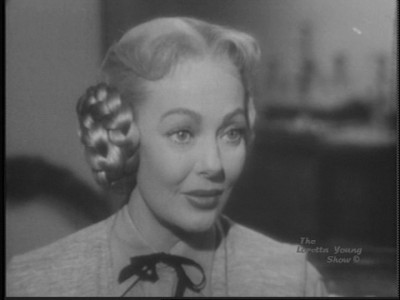 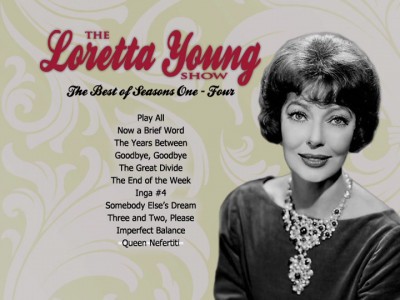 The Loretta Young Show: 100th Birthday Edition's 17 discs come packaged in two thick clamshell-style cases, with each disc getting its own spot on hinged partitions. A cardboard slipcase with lovely Loretta pictured on the front pulls it all together.

The 146 episodes on this set are sourced from the best materials available, which results in an adequate image on par with what you'd find on budget collections of '50s-era television. The show's original 35MM film negatives were apparently destroyed by NBC during contract negotiations with Loretta and Tom Lewis. The 100th Birthday Edition episodes are mastered off 16MM syndication dupes, prints whose source imperfections are noted in disclaimers on each disc. There are a lot of half-hours packed on each disc (ten per disc on the first set; seven on the second), with compression that emphasizes the graininess of the source prints. Most of the episodes also sport "Loretta Young Show" bugs, colorized title cards, and trademark/copyright info added more recently.

The original mono soundtracks provided on these episodes are a bit raggedy, but the dialogue and underscore is decently mixed. During scattered places on a few earlier installments where the audio drops out entirely, the missing dialogue is supplemented with subtitles. No other subtitle or alternate audio options are provided.

A few featurettes, which appear to have been produced in the '90s. The first disc of the Best of Seasons One-Four set contains a brief Loretta Young Biography (3:29) and an Interview with Loretta's Children (15:53), in which Peter, Judy and Christopher Lewis discuss their mom and her famous on-set "swear box" (among other topics). The Best of Seasons Five-Eight portion contains In Her Own Words - Loretta Young Talks About The Loretta Young Show (33:50). Although the first few minutes merely repeats the biography from disc one, the remainder consists of fascinating audio interviews with Loretta on the show's genesis, production - and those dresses. Narrated by son Christopher, Loretta Young's Home Movies (27:14) takes us through Super-8 footage of Loretta on the set, at home and on vacation. In Beverly Washburn Interview (16:13), the former child actress who co-starred in several Loretta Young Show episodes shares fond memories of a supportive, encouraging set. A 14-minute programme of weathered movie trailers from throughout Loretta's career round out the extras.

Compelling drama and lighthearted comedy, served with a dose of (not too preachy) moralism, formed the basis for The Loretta Young Show's 1953-61 run. Timeless Media Group's 17-disc 100th Birthday Edition box set is possibly the most complete version of this eclectic anthology going. Although it isn't a perfectly representative collection, the diversity of roles Young takes on in these half-hours might surprise even the most skeptical of her fans. Recommended. 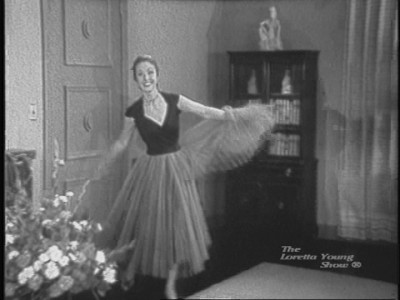 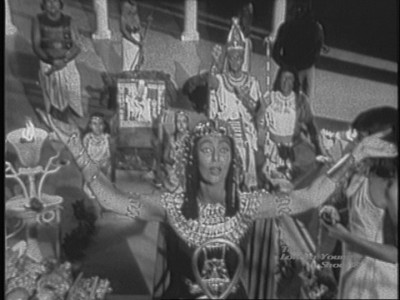