Lionsgate Home Entertainment // Unrated // February 12, 2013
List Price: $39.99 [Buy now and save at Amazon]
Review by Stuart Galbraith IV | posted March 4, 2013 | E-mail the Author
Several years back, a friend confessed some admiration for the premise of Nurse Jackie (2009 - present), about a great nurse who's also an irresponsible mother and wife addicted to pharmaceutical drugs. "At least the show has the sense not to send her to rehab," said my friend. Well, in Nurse Jackie - Season Four, Jackie Peyton (Edie Falco) does exactly that, go to rehab, but like the rest of the show's densely creative run, the season's story arc does not at all unfold as one might expect. The series is as ballsy as ever.

As I discuss in my reviews of Nurse Jackie's first, second, and third seasons, the Showtime series just gets better and better. I didn't care for it initially; the first few episodes of season one struck me as overly-familiar variations on Paddy Chayefsky's The Hospital (and later the NBC series St. Elsewhere), a black comedy take on a hopelessly broken health care system, albeit done on a much smaller, more intimate, 30-minute show scale.

But Nurse Jackie quickly found its footing, sporting a similar mélange of deliriously eccentric characters and situations. At its core it is a portrait of a working mother of two little girls who is just barely (and at times not quite) holding everything together: her marriage; her children's education and their wants and needs; her relationship to them; her management of an emergency room where there's never enough money or supplies or qualified doctors. Outwardly she's rock-solid, strong, assertive, confident, and unfazed by the dozens of problems and injustices hurled at her every day.

Up to this point she's coped by secretly taking massive amounts of drugs, mostly pilfered from her hospital's pharmacy, squirreled away so that a) no one will learn about her addiction while b) providing easy and immediate access whenever she needs one. The first three seasons of Nurse Jackie hinged on its title character's addiction and tangential issues constantly on the verge of being exposed. Every moment of every episode she ran the risk of ruining her marriage, losing her job, and losing her children.

Season Four does something rather remarkable: everything is exposed matter-of-factly almost all at once, in the season premiere or soon after. Instantly Nurse Jackie's entire premise is blown, all bets are off, anything can happen. In the very first scene of the first episode Jackie is in rehab, but what unfolds over this season's story arc is unpredictable and as ambitious as anything that's come before it. What a great show this is!

Lionsgate's Blu-ray of Nurse Jackie - Season Four is, once again, way above average, with two discs containing all 10 half-hour episodes, buttressed by strong transfers and a lot of extra features. (A small thing but, and I believe for the first time, the discs have a "resume" feature that allow the viewer to skip all the ads and FBI warnings after the first episode on each disc. It's a welcome addition.) 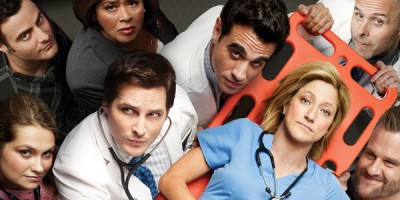 Previously on Nurse Jackie: Season three ended with Jackie (Falco) having dodged yet another bullet, a career-ending urine test ultimately pitched into the trash by trusted boss and All Saints' hospital administrator Gloria Akalitus (Anna Deavere Smith). Jackie decides to come clean with her bar-owner husband, Kevin (Dominic Fumusa) about her longtime affair - solely to secure drugs - with pharmacist Eddie (Paul Schulze). But the season ended with Kevin beating Jackie to the punch: he admits to having an affair instead. Jackie is speechless.

(Spoilers): Season Four opens with Jackie suddenly entering rehab, the hours leading up to this voluntary decision retraced in Episode One. More to the point, in short order Jackie's best friend, obscenely wealthy Dr. Eleanor O'Hara (Eve Best), gets Jackie into rehab, Jackie confesses as much to Gloria (but officially claiming vacation time to go to "Disneyland") while telling Kevin and the kids she'll be spending the month at a special nurses training program, a requirement of her job. However, Jackie's unhappy oldest daughter Googles the building and discovers its real function, and Eddie confesses all to an already pissed Kevin. By episode four Kevin is fully aware of Jackie's secret addiction and, furious, demands full custody of their two kids.

Meanwhile, Jackie unwisely leaves rehab early, against doctors' advice, and returns to work, certain she's got her addiction licked. But she's up against a tidal wave of personal and professional challenges, including Dr. Mike Cruz (Bobby Cannavale), a corporate lackey representing the interests of All Saints' new owners. (His character mirrors in many respects that played years ago by Ronny Cox on St. Elsewhere.)

When it first premiered Nurse Jackie's drug addiction premise received harsh criticism from the New York State Nurses Association, decrying Jackie's unethical behavior, no matter that drug addiction is not at all uncommon among health industry professionals. Of course, they missed the whole point of the show, that Jackie is in many ways a remarkable nurse who probably never could have lasted as long as she did without her steady dose of painkillers and stamina-builders. She thinks of herself as a kind of Supermom, juggling her insane schedule with the love and support for her daughters she wrongly thinks she adequately provides, while her addiction blinds her to the dangers she sometimes put them in (with pills hidden throughout the house, etc.).

The show is quite funny, particularly Anna Deavere Smith, a treasure, and especially Merritt Wever's hilariously eccentric junior nurse Zoey, a truly original creation. Conversely, I've never once cared for Dr. Cooper (Peter Facinelli), "Coop," an insufferable, unfunny "golden boy" singularly lacking in people skills. I'd have axed the character after the first season. He fits in with Nurse Jackie less than ever in Season Four, and thankfully has less to do. But the show primarily is a drama, always on the verge of profound tragedy.

The show surprises in most every episode. In one I was dismayed to see Rosie Perez, possibly my least favorite actress of the last 20 years, her abrasive screen persona like chalk on a blackboard, turn up as a hard-drinking but very pregnant loudmouth. Jackie and Eleanor role their eyes at her behavior exactly like this viewer, yet by the end of the episode Perez's character (and the actress's likability) are completely reversed. Who'd have thunk it?

As noted in my reviews of Seasons One and Two, Nurse Jackie episodes run about 26 minutes each. This is the length half-hour shows used to be back in the 1950s and '60s, before encroaching commercial interruptions reduced the number to 24 and, finally, to around 22 minutes. Those extra four minutes are critical; Nurse Jackie works great in a 26-minute format and it makes me wish more current series could return to this ideal running time.

Supplements include several featurettes, all in high-def: the self-explanatory "On the Floor at All Saints" and "Cruz Control." Also included are audio commentary tracks by members of the cast and crew on three episodes, and a gag reel that one will want to watch after finishing the entire season.

Still this critic's favorite continuing American TV drama, Nurse Jackie is terrific while the Blu-ray offers a spot-on presentation and is Highly Recommended. If you haven't seen it, catch up with it now.