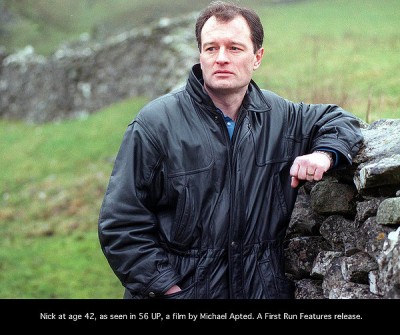 A cinephile's mortality is measured in seven-year intervals, when the latest installment of Michael Apted's groundbreaking Up series is released, and we all step back and ask, "Is it really that time again already?" You can start measuring your own aging process by when you first joined the documentary's fanbase.

Apted began his project in 1964, when he made what is now called 7 Up for British television. In the program, he chose various seven-year-olds of different classes and backgrounds from around Great Britain, showcasing their differences and their similarities. Seven years later, he gathered them together again for 14 Up with the intention of seeing how they changed. The plan was, and continues to be, that the film crew would keep checking in with the same participants every seven years for as long as possible. In the process, viewers around the world could participate, after a fashion, in their lives, watching how they change, grow, succeed, and fail. Some have had an easier go of it than others, a few have dropped out here and there, but all in all, the chosen few have lived interesting lives, pursuing their careers and building families. We get to know not just them, but their spouses, parents, children, and other important participants in their existence. At the same time, stereotypes are regularly busted, as we see many of the subjects dispense with the life that social convention might have picked for them.

56 Up feels like a particularly important milestone. Most likely all of the people who have been a part of the series have now passed the halfway mark in their lives. They are all of an age where their kids are moving out and going to college, and where their own parents are now senior citizens. Their mortality is becoming an issue, and Apted asks them all to reflect on growing old. This leads to many of them also reflecting on the experience of being in the film. Neil, the boy from Liverpool who struggled with homelessness and a nervous disorder in his twenties and thirties, has a lot to say about how he is perceived, as well as how little he feels the movies have earned him. On the other hand, Nick, whom we first met on a Scottish farm and who is now a physicist and university professor in America, has a more balanced view of things. He is not the man you see in the movies, yet that man exists and represents a facet of humanity. The characters in 56 Up are their own cosmic paradox. 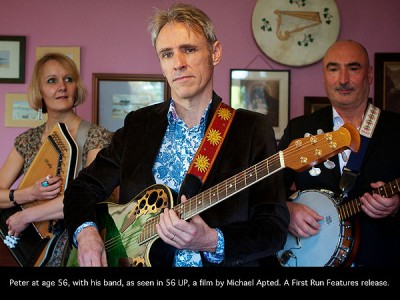 One surprise to be had in 56 Up is the return of Peter, who dropped out of the endeavor after 28 Up. He reveals that he decided to bow out after his anti-Thatcher comments caused a tabloid backlash in 1984. His decision to rejoin the cast is mostly mercenary: he has a band called the Good Intentions that he is looking to promote. Apted does his best to fill in the missing years, as he does with all the regular interviewees. Even if it has literally been seven years since you saw 49 Up, the personally crafted montage that introduces each segment will quickly jog your memory. These films are as much of a reunion for the audience as it is for the documentarian and his subjects. (Charles is still absent, and has been since 21.)

There's probably not much point in running down the list of all the members of the Up group. After all, if you're a dedicated follower of the series, you're going to want to find out on your own, and if you haven't dipped your toe in the water, most of what I'd tell you wouldn't make much sense. For those who have been eagerly awaiting 56 Up coming around, you won't be disappointed. On the contrary, you will be alternately amused, pleasantly surprised, and touched by all that your old friends have gone through since last you visited.

For those who are curious but who have never seen any of the Up films, I am sure you could jump in here if you really wanted to take a sampling of the ongoing experiment, but I guarantee you're only going to want to back up and start from the beginning. So, you might as well give that a go first. Though there is no DVD boxed set of the movies currently in print, you can find some of the individual discs, or view the films through streaming sites, including Netflix and Amazon. My guess is the movies will all be gathered together again whenever this new entry is readied for home video release; in the meantime, catch 56 Up in cinemas if you can. 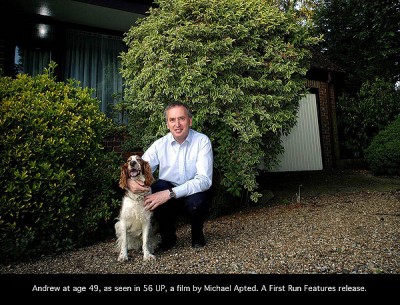