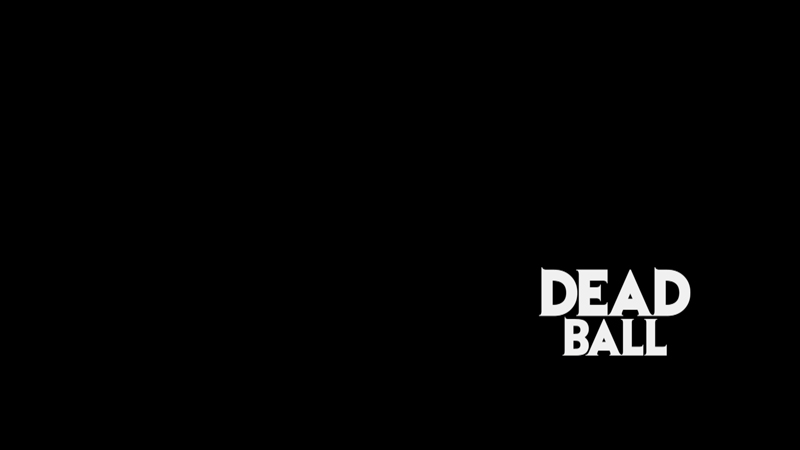 
The Movie
The quote on the front of Deadball is simple and to-the-point, as The Hollywood Reporter reports from Hollywood that this film is "Hilariously psychotic." THat's pretty much a siren song for me, as I love insane movies, as they often get to that point through a tidal wave of creativity or severe mental illness. Either way, it's probably going to be interesting to watch and possibly quite fun. This film, from writer/director Yudai Yamaguchi (the man who co-wrote Versus, directed the crazy Meatball Machine and contributed to The ABCs of Death) definitely leans more to the creative side of things, but there's definitely a good chance he should be institutionalized as well.

After all, it's not usually someone of a sound mind who constructs the story of a super-powered juvenile delinquent forced by a Nazi to join a criminal baseball team. But that's the case here, as Jubeh (Tak Sakaguchi) finds himself tossed into Pterodactyl Hall following a murderous vigilante spree. The thing is, Jubeh was once a promising young pitcher, but when pushed too far, he took his own father's life with his incredible throwing ability, causing him to swear off baseball, so it causes a conflict with the Nazi-loving leaders of the prison, as they want him to join the Hall's baseball team. To be honest, I kind of lost track regarding the motivation behind the prison having a baseball team, but it didn't seem like that big of a deal in the big picture, especially with the image of a line of guys getting savage cavity searches competing for my attention. 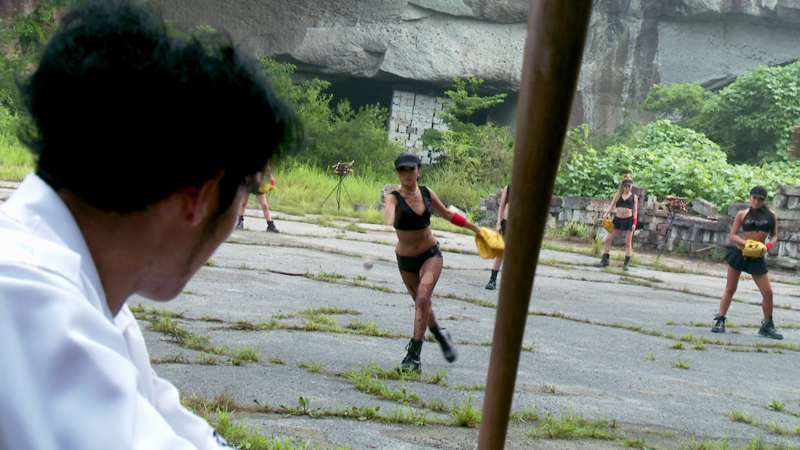 From Yamaguchi's past output, and even the font of this film's title, it's pretty obvious that he's been influenced by the Evil Dead franchise, and this movie is loaded with moments that would fit into those films seamlessly, from the over-the-top, blood-soaked violence to the moments of silliness that seem to be found everywhere. Jubeh is as bad-ass a hero as Ash ever was, especially with his ever-available cigarette, pulled from just off frame for a drag to punctuate his delivery of his wittier lines. The whole thing feels like a live-action cartoon, where mortal wounds are shaken off like a skinned knee and people are able to punch their foes through the phone. When soaking in this goofy fun, the movie is quite entertaining, even if it does get a bit gruesome in spots.

The problem is, once we get to the big game (of course there's a big game) the movie loses most of its sense of humor and revels in gore and action instead, with a teaspoon of sexiness from the bad girls of Saint Black Dahlia High, the opponents Jubeh and his team face. We get to see a tiny bit of the other Pterodactyl Hall deviants (introduced bluntly in a ham-handed bit of exposition from the team nerd/mascot (played in drag by Mari Hoshino)) but really we only need to know Jubeh, because everyone else, including the very attractive Black Dahlia girls, are interchangeable as the film goes off the rails in an orgy of explosions, dismemberments and blood spurts. The two halves of the film barely connect outside of sharing the same characters, and if you enjoy the tone of the first part you'll miss it fondly as the film grinds to its completion, attempting to wrap up a plot that didn't really matter (or make a great deal of sense.) If it found its finale on the diamond, it would have been a much better film in the end, as some unnecessarily complicated wrap-ups stand between you and the credits. 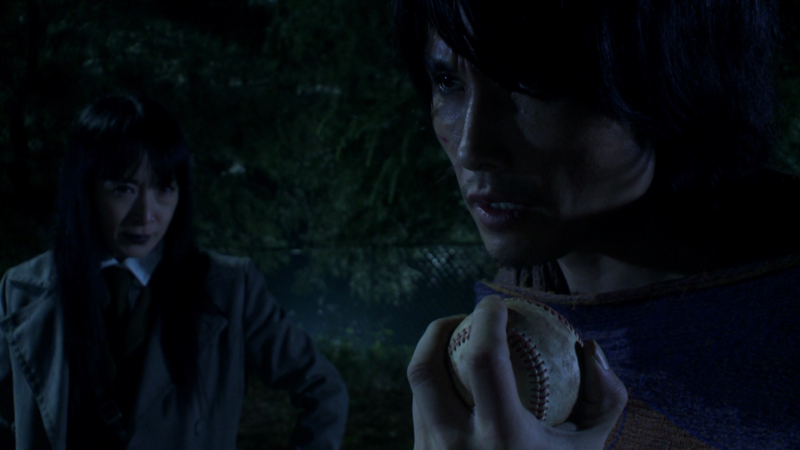 The Disc
A one-disc release, this film arrives in a standard Blu-ray keepcase. The disc has an animated menu with options to watch the film, select scenes, adjust languages and check out the extras. Audio options include Japanese DTS-HD Master Audio 5.1 and Dolby Digital 2.0 tracks, while subtitles are available in English.

The Quality
The 1080p, AVC-encoded transfer on this film handles what the film has to throw at it well, which includes some very manipulated HD footage, some exceedingly dark scenes and some sharp outdoor daytime scenes on the ballfield. Color is bright and vibrant, especially all the red, and black levels are strong, while the level of fine detail is quite nice. The clarity works against the film at times, as the blood spray can look exceedingly artificial, but perhaps that's part of the film's over-the-top concept.

The DTS-HD Master Audio 5.1 track here gives the side and rear speakers a good deal of work, with nice atmospheric effects in the surrounds, though there's so much happening at times it can get a bit overwhelming and there's a lack of differentiation between the channels. However there's more than enough oomph to the mix, with some strong low-end and a clear presentation throughout. Most importantly, when it's going down on-screen, the audio keeps pace.

The Extras
For a foreign B-movie, this release has some decent extras, starting with a 7:36 reel of cast interviews. Done on-set and in-costume with six members of the main cast, the piece lets them talk about the script, the characters and working with Yamaguchi. There's an interesting near-embarrassment in some of them in regards to what goes on in the film, and, not knowing much about Sakaguchi, he may actually be in character, as he drags on his cigarette between responses.

"Making of Deadball" (12:18) is a run of clips of on-set footage, showing how the film was made. The most interesting things here are the up-close looks at the effects work on the film, some of the filming flubs, and the strangeness that makes Yamaguchi happy.

Though the insights these extras provide were welcome, a spinoff short, Final Deadball (20:43) is the most intriguing extra. An alternate branching of one character's story, it's something like an episode of The Twilight Zone, in a story that's somewhat about trying to escape your destiny. It's pretty much nothing like Deadball in tone, but it's worth a look.

Wrapping thing up are eight Sushi Typhoon trailers, including one for Deadball. These are entertaining in their own right. 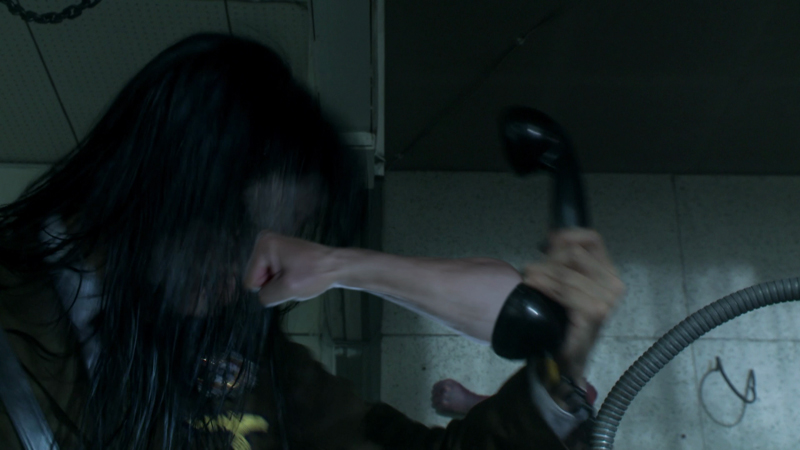 The Bottom Line
I'm not going to pretend that this film was headed for greatness, but the first half is a much different animal than the second half, which is a disappointment following the ridiculously goofy fun that permeates the movie's beginning. On the positive side, it's never boring, the presentation is solid across the board and there are a few quality extras to check out. If you're a fan of Sam Raimi's early work, you'll definitely want to give this one a look, just keep your expectations low.