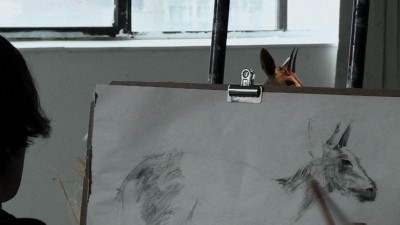 French-Canadian filmmaker Denis Côté takes us behind the scenes of a functioning, open-for-business Quebecois zoo/animal park in Bestiaire, and it's tempting to slot the film into the documentary category. That would be a mistake, however: Despite the obvious reality of what Côté is showing us (it's Parc Safari in Hemmingford, evidently a popular tourist destination), that's not what the film is "about"; though he had to go through all the clearances and approvals the same as any documentarian would have, it's often unclear within the completed movie (especially at first) exactly where we are or what the nature of this place is, with its exotic African creatures and tourists amassing to get an up-close look. Instead, Côté has made a coolly personal, formalist work that, like Chantal Akerman's From the East or the best work of James Benning, offers up a series of exactingly filmed images, edited together at a careful, almost musical tempo (adagio, this one would be), inviting us to look differently at, and perhaps think differently about, what's passing before our view. 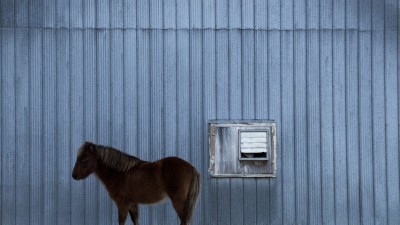 Our first hint that the film is neither a promotional trip to the animal park nor an exposé about the plight of captive animals removed so far from their native habitat (what makes Parc Safari such a big North American deal is the mostly African origin of its residents) comes even before the title, with a group of art students making various sketches of an animal we eventually realize is a dead, stuffed mountain goat. From there, the film takes us through three unmarked but distinct sections, apparently spanning from the final stretch of winter (when the park presumably shuts down) to its rousing itself and opening up for springtime: First and most languorously (probably constituting half or more of the film's running time), we go behind the scenes with the ostriches and giraffes and tigers and llamas and buffalo and zebras in their cages and pens, interacting with their human captors/caretakers/cleaners (some of whom also have shots dedicated to their own, often unglamorous behind-the-scenes roles in the operation); then there's a middle section at a taxidermist's workshop where we see a day's work in that vocation carried out in some detail; and finally, a last burst of preparation and an open-for-business day at the park, where the tone of the proceedings sits uneasily between sincere, fascinated curiosity about the animals and something more tackily carnivalesque, with animal-suited greeters and noisy, flashing things to provide the instantaneous diversions the often bored-looking animals, ostensibly the main attraction and the reason for the park's being in the first place, cannot. 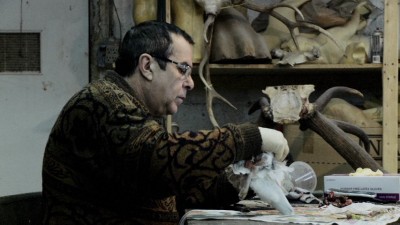 Côté's succession of images (created along with cinematographer Vincent Biron and editor Nicolas Roy) builds a kind of suspense both within each shot -- the camera rarely moving but the mise-en-scène and depth of staging visually exquisite, captivating, and subtly clever almost without fail -- and in their juxtaposition, as we never know what the next precisely conceived, symmetrically pleasing shot will add to the chain of pictures. Subtle shifts in Côté's compositional style are another clue as to the three different parts of Bestiaire: The first section, with the animals, is comprised of tableau-like, very carefully blocked and sound-designed shots; particularly memorable are moments consisting, visually and aurally, of nothing but frantically shuffling zebra's hooves, or a horse that looks miniaturized against the stark blue wall Côté has chosen as a backdrop, or a still frame within which an ostrich's curious, befuddled head pops humorously in and out from all sides. The stretch at the taxidermist's (which rhymes back to the opening sequence with the stuffed mountain goat, of course, and suggestively raises questions through its placement in the film about what relationship the living-dead animals created by taxidermists have to do with it, as one doesn't imagine that Parc Safari has an on-site dead animal-stuffing operation), though still very evenly composed, is the most actually documentary-like portion, the once again usually unmoving camera positioned for the most unblinking, dead-ahead gaze implying the least commentary/judgment possible. In the concluding section, with shots encompassing both the resident animals and the human spectators who've come to the park during this regular business day early in the season, Côté's still mostly static framings take a more active -- though never even close to emphatic -- role, giving us multiple shots that blur lines and defamiliarize the setting, making it entirely unclear, visually speaking, who's the spectator and who's being gazed upon, who's enclosed and who's looking in, whether it's the animals or the humans (always sticking to the assigned path, stuck in their traffic lines, corralled as we are at any amusement park) that are "inside" or "outside." 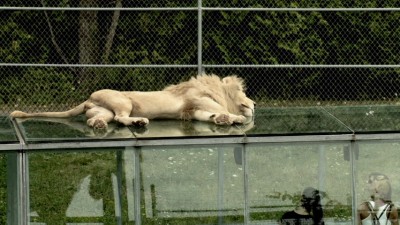 What could be the meaning of this frequently visually/aurally enrapturing defamiliarization? Côté dishes up plentiful rich, sophisticatedly concocted servings of visual stimuli, but they're actually not so easily digestible as that. First and foremost, the film works aesthetically, fascinating and gratifying us solely on the beautiful, meticulously considered way Côté has exploited the cinematic palette of light, framing, color, movement, and sound to create this particular impression of his animal and human subjects. The film then deepens itself, becomes more complex, not by backing off from its pure-visual-beauty formalism, but by including -- in the same formal, very consciously and conscientiously patterned manner -- depictions of an analogous process of aestheticization, a function performed perfectly by the seemingly incongruous parts of the film touching on taxidermy. It's this underlying, so subtly conveyed inner conflict that pushes Bestiaire over from purely cerebral, potentially inhumane reflexive art-for-art's-sake into something that has considerably more to do on other levels, confronting itself, and us, with a sobering question about the nature of "beauty" as conceived/created through formalism -- whether or not such an approach doesn't, by its very nature, disregard pain, privation, and other feeling, any unjust or remediable suffering that its subjects (in this case, the often uncaged but still captive and homesick animals of Parc Safari) might be experiencing. Bestiaire is overall an aestheticized, cerebral film (and, thanks to Côté's ace pictorial eye, quite an accomplished one, too), but one whose thoughts are empathetic and self-aware/critical enough to trouble the lovely, placid waters of its surface and make us squint through the ripples to see what might lie beneath the disturbance. It's not just pretty pictures; it's pulled as taut as can be by the unbreakable tension of being undeniably stunning to look at on the one hand, but on the other hand obliging us to ponder to exactly what extent that visual pleasure is a cinematic equivalent of the taxidermy the film so coolly depicts, and what the implications (bracing? refreshing? horrifying?) of such petrified beauty might be. 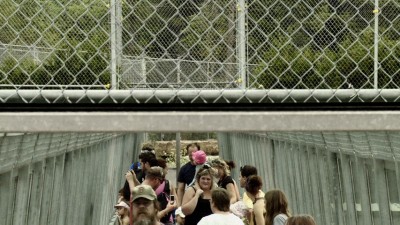 
Presenting the film at an anamorphic-widescreen aspect ratio of 1.78:1, the transfer of Bestiaire (which was shot on high-def digital video, always well-suited to home digital media) does right by the film's stunning, sometimes startling images. The picture is sharp and crisp, the colors clear and vivid (as vivid as they were intended to be, at least; some compositions, in lighting and color, are intentionally more monochromatic) throughout, with no aliasing or other compression artifacts apart from some rare, quite faintly discernible edge enhancement/haloing.


The carefully layered, field-recorded/carefully mixed sound design of the film (no subtitles, though some incidental, unimportant French is very rarely overheard) is presented as a Dolby Digital 2.0 stereo soundtrack that preserves every resonance of what we hear -- the clattering of cage bars, the shuffling of hooves, the rustling of feathers, the murmur of tourists at the safari park, and all other ambient sound -- beautifully, with no distortion or imbalance heard at any point.


--An interview with director Denis Côté (who has a reflective demeanor and a surprising personal style, something like a near-middle-aged, French-Canadian punkabilly aficionado), who discusses his two-pronged career ("bigger," more narrative films, and then the smaller-scale, more self-directed and aesthetically-driven work like Bestiaire); his hope for Bestiaire to be an aesthetic experience first and foremost, rather than necessarily informational or provocative; and the particular ins and outs of making the film, including dealing with the Parc Safari legal team, whose uncertainty over quite how to take the film -- Côté's hoped-for response, after all -- had to be massaged a bit before they'd give their legally required release to the finished work. 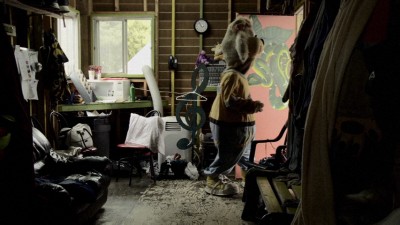 Denis Côté's Bestiaire seems to have the content of a documentary -- it consists mostly of footage taken at Parc Safari in Quebec, an outdoor zoo featuring exotic animals not native to North America -- but its greater subject by far is not the animals or their circumstances, but the way Côté has shot and assembled his moving pictures of them, placing the film more in a formalist vein than any expository or directly socially engaged category. What Côté has to show us, instantly appealing for the beauty of the creatures and perhaps somewhat troubling because of their confinement and exploitation -- the terrain of a more conventional documentary -- accumulates its deeper undertow and more powerful impact from the director's stark, evocative, sometimes eccentric framings and the deadpan yet intent quality with which they've been cut together. It's not a film conducive to decisive interpretation (it seems clear that that is part of the point), but over its brief running time, this cinematographic nature study becomes as unsettling as it is hypnotically eye-catching -- a bracing sensory experience that sticks with you to haunt and raise questions, both about our relationship to (and oft-disregarded place in) the animal kingdom and, more provocative and troubling, the way we cultivate living creatures as objects, then gravitate toward and look at the resulting display, whether it's animals gathered together for us to look at in a zoo or a movie that is, inevitably, practicing its own brand of specimen-gathering and display. Highly Recommended.