While there are some thematic links, to be sure, I found Naked Violence of little interest and Kidnap Syndicate a bit disappointing given its promising set-up. But Shoot First ... Die Later more than justifies the set. It's fantastic.

As with the earlier DVD set (since reissued to Blu-ray itself), the transfers are good, viewers have the option of listening to the films in their original Italian with English subtitles, or dubbed into English (Naked Violence defaults to Italian with English subs for a couple of scenes), and each disc is crammed with long featurettes plus there's a fat booklet, too. 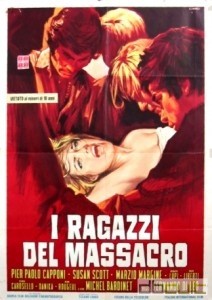 To recap, like other Italian filmmakers of his generation, Fernando Di Leo (1932-2003) was by all accounts an extremely intelligent, well-read and politically savvy writer-director, heavily influenced by Huston and Melville (there was to be a collaboration of the Di Leo and Melville at one point), aiming beyond the clearly defined commercial demands of genre filmmaking.

Di Leo first made a name for himself working on the script for Sergio Leone's Fistful of Dollars (1964) and later as Leone's assistant on For a Few Dollars More (1965). He wrote numerous Spaghettis after that, including Navajo Joe (1966), concurrent with intermittent directorial assignments, including the horror movie Slaughter Hotel/The Beast Kills in Cold Blood (1971), starring Klaus Kinski. But it was his Euro-crime films, poliziotteschi, in his native Italy, that earned him his lasting fame.

Naked Violence or, translated from its original Italian, "The Boys of the Massacre," was based on a popular novel by Kiev-born Italian immigrant Giorgio Scerbanenco, who wrote a popular series of novels featuring disgraced doctor (for having performed euthanasia) turned uncompromising police investigator Duca Lamberti. This was apparently the first film adaptation featuring Scerbanenco's character (though the author himself died just as this film was going into production), as well as being Di Leo's first foray into the poliziotteschi genre.

The movie, sort of an Italian Blackboard Jungle, opens with a female night school teacher brutally beaten, raped, and murdered, apparently by her troubled, teenaged students who, having guzzled 170 proof (!) absinthe, understandably remember precious little after the fact.

Most of the film follows Det. Lamberti (called "Mario Lambert" in the English version, and played by Pier Paolo Capponi) as he tries to piece together exactly what happened. With the aid of psychologist Livia Ussaro (Nieves Navarro, aka Susan Scott), he interviews the juvenile delinquents one-by-one, gradually concluding the teens were mere accessories to a much more fiendish crime involving cigarette smuggling and the mysterious older girlfriend of one of the youths.

The movie has been praised for its frankness regarding substance abuse, sexual assault, homosexuality and transvestism, prostitution and "kept" men, this in conservative Catholic Italy. It's easy to imagine the picture shocking 1969 audiences much as Blackboard Jungle did to American ones in 1955, but to my eyes the film seemed mostly cheap and shoddy, with many claustrophobic interrogations but not a lot of interest.

The booklet essay argues, ""Di Leo is more interested in shedding light on a hidden reality of society than in mimicking [the novel]. The narrative style is rough, essential, and elegantly crude." I agree but, for whatever reason, the picture just didn't grab me. (** out of *****) 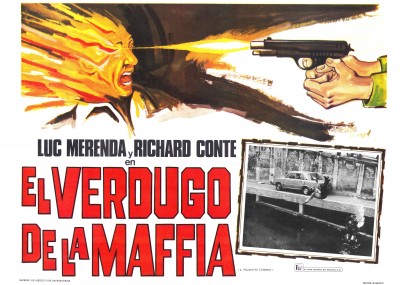 As lackluster as I found Naked Violence, I was unusually taken with Shoot First ... Die Later; it's the best of the Di Leo films I've seen to date. (Somewhat confusingly, the Blu-ray set's booklet obviously thinks so, too. It took me a while to realize that while the other two movies barely get mentioned, 17 of its 23 pages are devoted to this film alone.)

The picture is an extremely violent, grimly comic story about a dirty cop in league with Mafia drug traffickers, its authentically casual, businesslike approach to murder reminding me a lot of Martin Scorsese's later masterpiece GoodFellas (1990).

Luc Merenda stars as Police Inspector Domenico Malacarne, a celebrated, unflappable young Milano cop who, in the film's exciting opening, helps thwart a jewel store robbery, chasing down one bandit in the first of two tensely exciting car chases (staged by Remy Julienne, known later for his work on the 007 films).

Unbeknownst to all (including, up to this point, the audience), and least of all his career warrant officer father Malacarne (Salvo Randone), Domenico is a dirty cop. Working for drug trafficker Pascal (Raymond Pellegrin) through his subtly manipulative mouthpiece, Iago-like Mazzanti (Richard Conte, very good in one of his last roles), Domenico's steady supply of cash, partly used to fund girlfriend Sandra's (Delia Boccardo) taste for art and luxury, couldn't be sweeter.

Until, that is, when a habitual local nuisance, comical Neopolitan Serafino Esposito (Vittorio Caprioli, who's like an Italian Sid Melton) actually sees something worth reporting: a getaway car with Swiss plates blocking his front gate. Pascal wants the copy of the incident report, but it happens to be in a filing cabinet in the same office as his bursting-with-pride father. He's surprised when his son asks him to break the rules and let him leave with the file, and downright shaken when Esposito turns up murdered soon after. Like Ray Liotta's character in GoodFellas, Domenico is also increasingly cocky, thinking he's more in control of things than he actually is. The film's final scene is so devastatingly ironic on so many levels (I won't give it away here) it ranks among the best of Scorsese, or Peckinpah, which in many respects Shoot Now ... Kill Later also thematically resembles.

According to the end titles, Shoot First ... Die Later is based on a true story, and a novel by American William P. McGivern (which also served as the basis for Rogue Cop [1954], starring Robert Taylor and George Raft. McGivern's writings inspired Fritz Lang's The Big Heat [1953] as well.) Shoot First ... Die Later is incredibly grim.. (Spoilers) Practically the entire cast is dead by the fade-out, including even the cute cat Esposito sweetly carries around in a basket, Esposito's killer sadistically sticking the feline in the same kind of wire-wrapped plastic bag used to suffocate its owner.

Parts of the film reminded me so much of GoodFellas it had me wondering if Scorsese had seen and been inspired by it. There is, for instance, the shocking yet casual execution of a mob soldier shot in a manner quite similar to Joe Pesci's character's assassination in GoodFellas, and that film's deglamorization away from The Godfather is already onscreen in Di Leo's film in 1974, with Merenda's charismatic crook falling deeper and deeper down the rabbit hole, finally willing to surrender any and all moral codes just to keep the cash coming in. (**** 1/2) 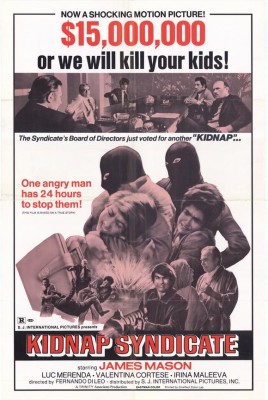 Kidnap Syndicate starts out promisingly, a variation, indeed something like the inverse of Akira Kurosawa's great film High and Low (1963). (Di Leo, remember, had worked on Leone's Yojimbo imitation a dozen years before.) In Kurosawa's film a wealthy businessman believes his young son has been kidnapped, only the victim turns out to be the son of his chauffeur. Despite this, the kidnapper insists the wealthy man still surrender his entire fortune to get the boy back. In Kidnap Syndicate, the son of wealthy businessman Filippini (James Mason) is targeted, but in the struggle to snatch his boy a schoolmate, son of lowly mechanic Mario Colella (Luc Merenda again), trying to protect his friend, gets snatched as well. The kidnappers demand $15 million for safe return of both boys.

The set up is intriguing, with Filippini using his money and influence to take charge of all negotiations, which he's eager to drag out until a more reasonable ransom can be agreed upon. ("This is a deal like any other," he tells his angry wife, played by Valentina Cortese.) Colella, poor and powerless, has no say at all, and the best the police can do, represented by Commissario Magrini (Vittorio Caprioli again, here as good doing straight drama as he was funny in the previous film*), is to try and comfort the anxious father.

The film falls apart in its second-half. (Spoilers) That's because the story turns on a dramatically illogical twist. No one, not Filippini, not Colella nor the police and certainly not Di Leo anticipated that as cool in the negotiations as Filippini may be, the kidnappers might hurt Colella's disposable son to show they mean business, and that's exactly what happens. Everyone appears shocked, but for the film's attentive audience it seemed all but inevitable.

Before this point, Colella expresses frustration at Filippini's apparent inaction but never raises the possible consequences of his tactical stalling. Worse, perhaps concerned that he might appear unmanly, the film doesn't contrast Filippini's calmly calculating demeanor with Colella's impotence. If my child were kidnapped I'd go mad, climbing the walls and unable to think of anything else, but something about Colella, through Di Leo's direction, the screenplay and/or the actor's performance, remains stubbornly unbelievable, as are the actions he takes after the fact.

(More Spoilers) Exemplifying this is a critical scene where Luc Merenda and James Mason are both called upon to express shock and profound grief. Mason is so good he subtly conveys a man outwardly expressing these emotions because it's expected of him and not because he actually feels that way. Merenda, on the other hand, in trying to express genuine shock and grief, isn't up to the task, coming off phonier than Mason's deliberately phony performance. (***)

All three films on three Blu-ray discs (each in their own case) look good, the latter two looking a bit better than Naked Violence, with Shoot Now ... Die Later coming off best overall. (Kidnap Syndicate's title elements are a bit dog-eared.) All are 1.85:1 widescreen, new masters with Kidnap Syndicate culled from the original camera negative. Linear PCM 2.0 dual mono tracks are offered in both Italian and English for each film. The English tracks feature both Richard Conte's and James Mason's actual voices, so it's a tough call which option to choose on those films, complicated further by the fact that star Luc Merenda is French, so presumably that's not his voice on the Italian track anyway.

Each title is loaded down with exhaustive extra features and, as before, Di Leo is also interviewed at length, apparently videotaped shortly before his death in 2003. Like the earlier set, Vol. 2 is positively packed with supplements: original trailers, the aforementioned full-color booklet, and no less than five documentary featurettes: "The Master of the Game," "The Second Round of the Game," "Goodfellas," "Fernando Di Leo at the Cinematheque Francaise," and "Violent Cities: the Other Fernando Di Leo's Trilogy" (sic), nearly two hours worth of material, including interviews with key surviving members of Di Leo's casts and crews.

The Fernando Di Leo: The Italian Crime Collection Vol. 2 is a mixed bag, but Shoot First ... Die Later all by itself makes the set worth rushing out and getting, while the others offer some interest. The supplements are great and the video transfers are very good. Highly Recommended.

* Maybe he learned a thing or two from Laurel & Hardy, with whom he briefly worked with on Atoll K (1951).