Breaking Glass Pictures // R // May 7, 2013
List Price: $21.99 [Buy now and save at Amazon]
Review by Stuart Galbraith IV | posted May 21, 2013 | E-mail the Author
The more Hollywood turns to comic books, board games, and Disneyland rides for story material, the more we need filmmakers like Henry Jaglom. Beginning with A Safe Place (1971), Jaglom carved a niche making smallish independent movies uniquely his. He's probably best known for his ensemble, female-dominated films revolving around a particular subject: women's relationship with food in Eating (1990), biological clock-ticking in Babyfever (1995), being single in Someone to Love (1987), recognizing a turning point and moving on with New Year's Day (1989). His movies famously allow actors the freedom to improvise, drawing from their own lives and emotions, sometimes intensely personal raw material buried deep. Yes, they're still working from scripts that define character arcs and move their fictional characters from one place to another, but most of Jaglom's actors find working on his movies a liberating experience, while for the audience there's a kind of emotional truth and directness rare in American movies today.

Some dismiss Jaglom's films as merely indulgent but I suspect that's because his critics probably feel squirmily uncomfortable watching others exploring themselves (and each other) so intimately, or that they regard self-analysis as pointless and/or boring. That's their problem. Jaglom's best movies vividly capture feelings and sexual tensions often off-limits in most other kinds of movies, even dramas supposedly about intimate personal relationships. Jaglom dollies in for a tight close-up just when others would turn away. And through this the audience often recognizes bits and pieces from their own lives and, when these movies really hum, gain a little insight into their own lives.

His movies aren't easily categorized, hence Henry Jaglom Collection vol. 2: The Comedies is rather varied. Sitting Ducks (1980), about two schmucks on the lam after stealing a fortune from the mob, is Jaglom's most conventional comedy, though at times it's hilarious and unusual. Can She Bake a Cherry Pie? (1983) is also quite funny, though the plot revolves around a deeply troubled woman (Karen Black) on the verge of a complete mental meltdown. New Year's Day has funny moments but is generally darker and weightier.

The movies are newly remastered in high-definition and in 16:9 enhanced widescreen, and they feature worthwhile special features, including audio commentaries on Sitting Ducks and New Year's Day. The copy I received mistakenly listed Can She Bake a Cherry Pie as being in PAL format but the disc was definitely NTSC. 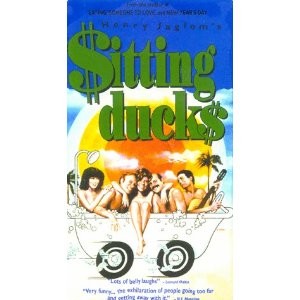 On the surface Sitting Ducks resembles many another heist-road comedy, with lowly Mafia accountant Simon (Michael Emil [Jaglom], Henry's brother) talked into stealing one day's take by his excitable friend Sidney (Zack Norman). Netting precisely $724,360, they hide the dough in the wheel rims of a limousine and make for Miami Beach where they plan to catch a plane to Costa Rica.

Along the way, Sidney can't stop throwing money around: he phones in bets to a bookie he'll never see again, ostentatiously invites an untalented singer-songwriter, Moose (Richard Romanus), to be their chauffer on the ride down, and he picks up a beautiful but mysterious woman, Jenny (Patrice Townsend), after her temperamental boyfriend (Henry Jaglom) abandons her at a Holiday Inn. For his part, Simon is attracted to a waitress, Leona (Irene Forrest), who abruptly quits her job after her supervisor berates her for socializing with customers. Soon enough it's a party of five.

Despite the conventional set-up, Sitting Ducks is nonetheless quite hilarious at times and scenes play out in eccentric and unexpected ways. Michael Emil, who'd never acted before (and cast at Jack Nicholson's suggestion), is a naturally talented character comedian, a real discovery who frequently turns up in Jaglom's movies but rarely anyplace else. (The major exception being Nicholas Roeg's Insignificance, in which Emil was excellent as, more or less, Albert Einstein.) More on him below.

The movie intrigues in other respects. Townsend, Jaglom's future ex-wife, gets a special "and Introducing" credit, but she's better served in Jaglom's Always (1985), playing a character modeled after herself. Instead, Irene (Cagen) Forrest, who later gave up acting to become a respected casting director, dominates as a classically Jaglomesque fragile woman looking for love in an environment where all the men are primarily interested in sex. She died in 2010 but there's a great YouTube tribute video devoted to her that, among other things, includes her best scenes from Sitting Ducks.

Intriguingly, years later Jaglom reunited Emil and Norman for a sequel, Lucky Ducks that was shot but deemed unreleasable. (Some articles on the Internet include it in Jaglom's filmography, though apparently there was never a final edit.) While I don't doubt Jaglom has good reasons for keeping it under wraps, even if it's terrible I'd certainly like to see it. 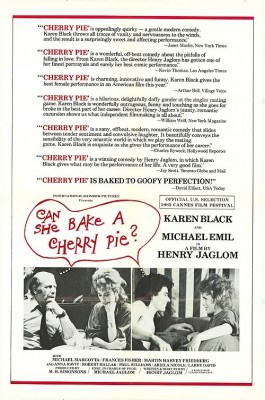 Can She Bake a Cherry Pie? is similar to Robert Altman's underrated A Perfect Couple (1979) - they'd make a great double-bill - though Jaglom's film is looser and confidently allows its two leads long, funny monologues capturing the anxieties and tensions of burgeoning romantic relationships.

Karen Black stars as Zee, a neurotic New Yorker whose husband (Paul Williams, not the Still Alive songwriter.) one morning packs up and leaves her. At a cafÃ©, Zee is so obviously distraught that concerned businessman Eli (Michael Emil) strikes up a conversation, hoping to calm her down. Eventually they become an unlikely couple, he confident and outgoing but highly eccentric (he uses a Amerec Pulse Meter to measure his heart rate during intercourse and hangs nearly naked upside-down, like a bat, to improve his circulation), and she paranoid (always thinks she's being followed) and desperately lonely.

There's not much plot per se though late in the picture their relationship is threatened by Larry (Michael Margotta of Drive, He Said), an unsubtle womanizer who brazenly seduces Zee while Larry's own humiliated girlfriend (a baby-faced Frances Fisher) and Eli watch from the sidelines, helpless.

Nevertheless, there are many wonderful scenes of these two characters sizing each other up and trying to decide if they're ready for a more permanent relationship. Karen Black, excellent here, had been one of the major talents of the 1970s, especially in films like Five Easy Pieces, Day of the Locust, and Nashville, but she seems either to have had a bad agent or perhaps she simply preferred keeping busy even if that meant projects not worthy of her talent. She juggled the schlock with more ambitious projects like this one until about 1990, when the worthwhile ones largely dried up. But Can She Bake a Cherry Pie? serves as a real showcase for her talent, and her free-spirited, panic-stricken Zee remains one of her best roles.

Michael Emil once again is hilarious. His usual screen persona is the bald but sexually confident, garrulous oddball, outwardly ordinary but inwardly articulate yet very peculiar. It's an original, beguiling character, a ringer in Jaglom's films just as Richard Deacon's Mel Cooley was on The Dick Van Dyke Show: a sure-fire laugh-getter. He's so naturally funny that, as Groucho Marx did before him, he complains people laugh even when he's trying to be serious.

Two other notes: the movie makes good use of its pre-gentrified Manhattan locations, Jaglom filming in and around the kinds of places locals actually frequented back in those days, many of these hangouts now sadly long gone. Also, look for Curb Your Enthusiasm's Larry David, who has a small part as the frizzy-haired friend of Eli's co-worker. 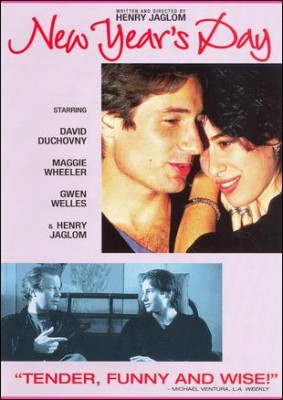 After a long, red-eye flight from Los Angeles, Drew (director Jaglom) arrives in Manhattan on New Year's Day only to discover three women - Lucy (Maggie Wheeler), Annie (Gwen Welles), and Winona (Melanie Wheeler) - still occupying his midtown apartment, they believing their lease wouldn't expire until the end of that day.

Exhausted, Drew slumps on a sofa while the accommodating women pack and say their goodbyes to family and friends. Winona plans to get pregnant within the next year, with or without a man to help her raise the baby. Lucy, her life in disarray, plans to escape to Los Angeles, exactly the reverse of what Drew, one generation older and more pessimistic about the future, is doing, moving back to New York. Annie, meanwhile, is beside herself, upset for no clear reason other than that her living arrangements are about to change.

New Year's Day starts out promisingly, then meanders in the middle cutting among characters in little vignettes similar to Jaglom's superior Someone to Love (1985), but then recovers at the end for a vividly emotional climax between Lucy and Annie, with Gwen Welles especially good here. (She's also excellent playing a similarly neurotic character in Jaglom's Eating. Sadly, she died of cancer in 1993 at age 42.)

The film is sometimes referred to as New Year's Day (Time to Move On), which pretty much says it all. Despite its ensemble cast, it's primarily interested in Lucy. She knows she's in an unhealthy relationship with Billy, that her father is overly protective and/or controlling, while other men and women, perhaps sensing her great uncertainty at changing her life so dramatically, try to seduce her into staying on. Drew, moving in the opposite direction, seems to think he's too old to make any real, substantive changes in his life, but Lucy's youth and obvious passion for living (she swims with dolphins and taught sign language to a chimpanzee) causes him to reconsider his pessimism.

All three movies are presented in 16:9 enhanced widescreen, approximating their original 1.85:1 theatrical aspect ratios. Though remastered in high-def, Sitting Ducks's original film elements are a bit dog-eared, particularly its titles, though otherwise it's certainly watchable, while the other two appear perfectly fine. All three are English mono only with only New Year's Day offering optional English subtitles. All three are region 1 encoded.

The terrific supplements on Sitting Ducks include a wonderful audio commentary track with Jaglom, Michael Emil, and Zack Norman, and all three appear in the featurette "30 Years Later Live Q & A at the American Cinematheque." Also included is Meredith MacRae's "Mid-Morning L.A." television interview with Jaglom and Patrice Townsend, and Jaglom's 1973 45-minute film, My Brother's Sex Life.

Jaglom, David Duchovny, and Maggie Wheeler provide a commentary track for New Year's Day, while Can She Bake a Cherry Pie? extras are limited to trailers for all of Jaglom's films to date.

The Henry Jaglom Collection vol. 2 : The Comedies serves as a good introduction to the independent, original filmmaker in that it offers three pictures each very different from the other two, yet all are infused with the filmmaker's unmistakable style and interests. A DVD Talk Collector Series title.