Image // PG-13 // July 30, 2013
List Price: $17.97 [Buy now and save at Amazon]
Review by Stuart Galbraith IV | posted August 3, 2013 | E-mail the Author
Peggy Sue Got Married (1986) is one of those movies on the cusp of greatness but, for a variety of reasons, can't quite pull off what it comes so heartbreakingly close to achieving. It has several outstanding scenes, a lovely score by John Barry, and a mostly-good cast of soon-to-be stars and Hollywood veterans at the end of long careers with a couple of stand-out performances, and for those reasons it's definitely worth seeing.

Kathleen Turner stars as a middle-aged woman transported back in time to 1960, her senior year of high school. The film plays like an adult version of the clever but broader and more juvenile Back to the Future, released the year before. It's also a female take on "Walking Distance" (1959) the classic Twilight Zone episode with Gig Young playing an unhappy man in similar circumstances.

Originally a Tristar-Rastar presentation co-produced by Zoetrope, Francis Ford Coppola's company, and Paul R. Gurian, the no-frills Blu-ray comes courtesy of Image/RLJ Entertainment. The transfer is okay, and includes a 5.1 remix from its original mono. 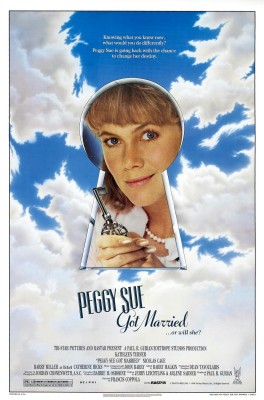 The movie opens in the (1986) present, when Peggy Sue Bodell (Kathleen Turner), aided by daughter Beth (Helen Hunt), prepares for her 25-year high school reunion, this despite her recent separation from cheating husband Charlie (Nicolas Cage), her onetime high school sweetheart, the only man she's ever dated.

She awakens to find herself back in time, recovering from giving blood in her old high school's gymnasium. Taken home by Maddy and Carol, Peggy Sue is overcome with emotion walking through the house she grew up in, as it was 25 years ago, and by the younger versions of her parents (Don Murray and Barbara Harris, the latter especially good) and kid sister (Sofia Coppola). Note: Peggy Sue's appearance doesn't chance from present to past; one assumes, however, that everyone sees her as she appeared when she was a teenager.

Peggy Sue's reactions to what she sees are quite different from Marty McFly's (Michael J. Fox) in the Back to the Future movies. Peggy Sue has no idea how or why she finds herself back in time (she thinks she might be dead) and so, initially, decides she might as well go along for the ride and enjoy herself.

In a fresh approach to this overworked sci-fi/fantasy sub-genre, screenwriters (and husband and wife team) Jerry Leichtling and Arlene Sarner have Peggy Sue making no effort to pretend to be the girl she was at 18, nor does she exert much self-censorship or self-control in reacting to various ironies she witnesses. Home from school, she helps herself to a bottle in her father's liquor cabinet and, when he returns home to proudly show off the new car he's just bought, she bursts out laughing.

Peggy Sue: It's funny. It's really funny. You bought an Edsel!

Father: Young lady, what's the matter with you? Are you drunk?

Peggy Sue: Uh, just a little. I had a tough day.

Where Back to the Future offered a clever, complex story about the ramifications of time travel into the past, and its possible effects on the present (and future), Peggy Sue Got Married is instead concerned, and works best, in dramatizing the emotional impact of being able to revisit one's past, and in that sense is much closer to Rod Serling's "Walking Distance" episode, itself partly inspired by the similarly emotionally-driven stories of Ray Bradbury.

Unquestionably the film's best scene has Peggy Sue taking a bus out into the country to visit her very elderly grandparents, clearly long dead by 1986. In an earlier scene she innocently answers the telephone and is so startled to hear her grandmother's voice on the other end of the line that she drops the phone and runs upstairs, so emotionally unprepared she is for that moment. Later, at their home, she spends a quiet evening with them (Leon Ames and Maureen O'Sullivan). She shares her secret and while they may or may not believe her exactly, her obvious sincerity and experience on the subject of mortality and of time passing causes them to accept her claims nonjudgmentally. Ames is especially wonderful here and it's among the best scenes in Francis Coppola's oeuvre.

The movie, however, has other problems. Nepotism hurts it, certainly. For starters Coppola's daughter, Sofia, looks nothing at all like Turner, Hunt, Harris, and Murray, nor Ames and O'Sullivan for that matter, who otherwise are all quite believable as a family. Her jarringly inconsistent appearance (Jessica Rabbit meets Olive Oyl) undercuts Peggy Sue's otherwise emotional reunion with her.

Coppola gave nephew Nicolas Cage several big breaks early in his career (he's also in Rumble Fish and The Cotton Club), and while obviously intensely committed to the role, his choices are all wrong. He affects a nasally voice, based on Pokey from The Gumby Show, one that Coppola and the studio reportedly hated, and which almost got Cage fired. Already unconventional leading man material to begin with, Cage's eccentricity is further compounded by an exaggerated pompadour with blonde highlights making him look more odd and less believable as the romantic teenager Peggy Sue would fall for.

Turner and Cage aren't compatible in other ways. She was 31, he 21, resulting in her looking too old for him in 1960, even taking into account that her appearance doesn't change, and he's not believable as a middle-aged man in 1986. Coppola otherwise seems to have opted for a middle-ground casting actors playing 18- and 43-year-olds within the same film. Barry Miller was 27, Joan Allen 29, with Catherine Hicks the oldest at 33. Debra Winger was the original choice to play Peggy Sue; she was less than a year younger than Turner, but where Winger might have been more compatible with Cage or some other, younger actor, Turner is more convincing playing the mature Peggy Sue (played throughout, after all) than Winger likely would have been.

In any case, the film is strangely sloppy in terms of makeup. Some characters are aged with gray highlights, some only with differing hairstyles, and virtually no one has any wrinkles, is balder, fatter, etc. after 25 years, straining credibility further. (And this I know. My 30-year high school reunion is tomorrow.) The result is many characters aren't completely convincing in either period or in one but not the other.

Conversely, little touches of Coppola's ingenuity are in evidence, though so slyly done they are easy to miss. The opening and closing shots cleverly use doubles to suggest Peggy Sue's through-the-looking-glass journey. It's so well choreographed few would even realize they are looking at a carefully staged trick.

I'm not crazy about most "director's cut" home video releases (they're usually just marketing gimmicks) but in the case of Peggy Sue Got Married I suspect a longer version could improve the film substantially, as Coppola's revitalized versions of One From the Heart (1982) and The Outsiders (1983), both out on Blu-ray here in Japan, attest.

There are hints of this throughout Peggy Sue Got Married. At the reunion, Peggy is reintroduced to Rosalie (Lucinda Jenney), seen in a wheelchair and paralyzed from the waist down. The original screenplay had her an aspiring gymnast back in 1960, with Peggy Sue somehow trying to prevent the accident that would paralyze her. Instead, Rosalie is introduced at the reunion but there's no reference to her accident in the 1960 footage. Peggy Sue's reaction to the sight of her kid sister is so strong (compared to, say, seeing her parents) that it had me wondering if the sister is supposed to be dead by 1986.

More importantly, the film so rushes to get Peggy Sue back to the past (by the 18-minute mark) that there's not enough time to explain the reasons for her unhappiness in present day 1986, or the complexities of her relationship with Charlie and others.

Shot in 1.85:1 flat Panavision, Peggy Sue Got Married looks pretty good on Blu-ray, though it lacks the bold pallet of primary colors that made One from the Heart and The Outsiders so visually memorable. Originally released mono, the film has been remixed for 5.1 DTS-HD Master Audio, with John Barry's marvelous score benefitting most. The region A-encoded disc has amusing cover art, prominently featuring seventh-billed Jim Carrey, who has a minor, supporting role, yet effectively bumping two of higher-billed male co-stars (Miller and Kevin J. O'Connor, who plays a beatnik with whom Peggy Sue becomes fascinated.) No Extra Features.