Shout Factory // Unrated // July 23, 2013
List Price: $29.93 [Buy now and save at Amazon]
Review by Stuart Galbraith IV | posted July 24, 2013 | E-mail the Author
One of my favorite DVD releases ever was Shout! Factory's collection of You Bet Your Life episodes starring Groucho Marx. Two sets, in fact, were produced: You Bet Your Life - The Lost Episodes and You Bet Your Life - The Best Episodes, in 2003 and 2004. Not only were the episodes for these sets well chosen, each included gobs of supplementary features, including a full-color booklet, blooper reels, audio commentaries, original commercials, and so forth. They are sets I revisit frequently.

Shout!'s new The Jack Benny Program - The Lost Episodes deliberately seems to be emulating those earlier, wonderful releases. If that was their aim, they've succeeded. Though both this and the You Bet Your Life utilize source material culled from the UCLA Film & Television Archives, there seems little actual crossover of Shout! personnel. The You Bet Your Life DVDs were produced by Robert A. Finkelstein, Paul Brownstein, and Robert S. Bader, while the Benny set is credited to Jordan Fields.

Regardless, its nine-hour sampling of shows, again supplemented with some fascinating and funny extra material, is a true delight from start to finish, a must for all fans of great comedy. 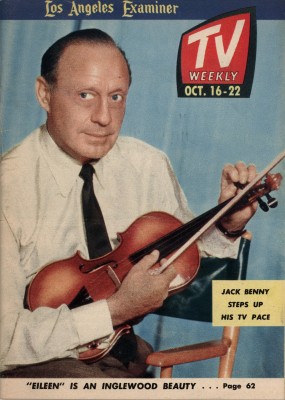 I remembered seeing reruns of the original TV version (1950-1965) of The Jack Benny Program as a kid, but those syndicated episodes were mainly derived from the handful of shot-on-35mm-film shows which were the exception rather than the rule. During its long run, The Jack Benny Show was typically kinescoped. (Add to that, The Jack Benny Program aired infrequently, with only a smattering of episodes during its first few seasons then, gradually, airing every third or second third week for most of its 15-year run, finally becoming a weekly series only near the end. Most shows were merely kinescoped while others, particularly those filmed on location, were shot on 35mm film. A few were even shot or videotaped in color.)

Regardless, the shows in this set are a goldmine. The set includes eighteen "long-lost episodes" reportedly "unseen since their original broadcast," dating between 1956 and 1964, from Jack Benny's personal collection of kinescopes since restored by the UCLA Film & Television Archive (those involved include Dan Einstein, Tony Best, Michele Geary, Randy Yantek, Ryan Chandler, and Masis Markar). Also included as bonus material are newsreel clips dating as far back as 1935 to excerpts from Benny's later TV specials, including Jack Benny's Second Farewell Special, which aired 11 months before his death in December 1974.

From his earliest radio series in 1932 until that last starring special 42 years later, The Jack Benny Program, as all of his variously-titled radio and TV shows are generally called today, Benny's persona and the show's format was firmly locked into place with little variation, and audiences loved it.

Jack Benny played himself in the same sense that Larry David plays himself on the not dissimilar Curb Your Enthusiasm. Benny's character, a successful radio and TV star (much less so in the movies) is notoriously cheap, vain, an untalented violinist, and a ham, pretty much the opposite of Benny in real life. Superficially charming, the Benny character frets about his looks, famously claiming to be thirty-nine well into his seventies.

A master of comic timing, indeed, the master of the pregnant pause, Benny could extend a laugh almost indefinitely with the subtle expressions he shared with his audience. Benny's greatness as a comedian was, as director Norman Abbott points out in one of the extras, as a target of derision but mainly as a reactor: reacting to the crazy world of show business and Hollywood generally, playing off an endless parade of major league guest stars who would eagerly appear on his show, and Benny's own stock company of wildly eccentric characters. Of the latter the most famous were chubby announcer Don Wilson, dimwitted boy singer (even into his late-middle age) Dennis Day, and Eddie "Rochester" Anderson, Benny's black (but never subservient) valet and chauffeur. Rochester's equal racial footing with Benny is exemplified in one funny monologue included here. Benny, in character, explains Rochester in fact is quite wealthy himself and frequently the host of lavish parties where Jack works for him. "And he's a fabulous tipper, too!" Benny adds.

Benny's best friend in real life was comedian George Burns, who with wife Gracie Allen had a similarly surreal series blurring the lines between the real people they were and the characters they played on TV. On The Jack Benny Program, each show would begin with Benny's monologue, often thwarted by a (planted) member of the studio audience, or by a sudden (staged) dispute with the show's sponsor, or by the surprise (scripted) appearance of a big Hollywood star in the audience who'd come on stage and wind up singing a song or appearing in a sketch. Like Jackie Gleason's The Honeymooners, old scripts that had gone over well before were retooled again and again for Benny, and like The Honeymooners, no one seemed to mind.

For the audience, never quite knowing how much of this was scripted and how much ad-libbed is part of the fun. If a line was flubbed, something went wrong, or sometimes if one of Benny's regulars did something particularly funny, Benny would frequently break character, unsuccessfully suppressing a laugh, and struggle to recover and get back on-script. It happens at least once on nearly every show, leading me to suspect some of Benny's hilarious break-ups might well be perfectly-timed fakes, while at other times Benny is clearly caught off-guard and nearly falls to the stage floor laughing. (George Burns reportedly could make Benny helpless with laughter within seconds.) In one episode there's a running gag insisting that fat Don Wilson is actually quite thin but pumped full of air before each show. Every time Benny pokes Don's stomach there's an amusing sound effect, the result of which is that Benny and Don can barely get through a Lux Soap commercial because the sound effect so amuses them, and Benny can't stop poking Don.

As kinescopes, episodes are of varying quality, but as a helpful sidebar in the set's booklet notes, they've undergone considerable restoration and are all certainly presentable and their technical limitations never get in the way of the laughs. The region 1 encoded discs have no subtitle options, but the set is attractively packaged.

Disc One includes a warm group interview with Harry Shearer, then a child actor who appeared on both the radio and TV incarnations of The Jack Benny Program during the 1950s; Norman Abbott, director of many of the later TV episodes; and Dorothy Goldman, Benny's personal secretary from 1957 until his death. Disc Two includes excerpts from three post-series specials, Jack Benny's New Look (1969), Jack Benny's 20th Anniversary Special (1969), Everything You Ever Wanted to Know About Jack Benny But Were Afraid to Ask (1971), and Jack Benny's Second Farewell Special (1974). It's worth noting that both in appearance and in terms of his timing the Jack Benny of 1974 pretty much looks identical to the Jack Benny of 1956. Disc Three includes four Hearst Newsreel excerpts, from 1935, 1941 (two), and 1945.

One of the best TV-on-DVD releases of 2013, The Jack Benny Program - The Lost Episodes is a DVD Talk Collector's Series must.