First Run Features // Unrated // July 2, 2013
List Price: $29.95 [Buy now and save at Amazon]
Review by Stuart Galbraith IV | posted June 30, 2013 | E-mail the Author
56 Up (2012) is the eighth in an ongoing series of remarkable television documentaries (most released theatrically in the U.S.), of which all but the first, Seven Up! (1964) were directed by Michael Apted, who did work on the first as a researcher. In that initial show, the intention was to contrast British schoolchildren from varying economical backgrounds, primarily privileged kids attending exclusive boarding schools, Liverpudlian middle class kids, and working class East Enders. "Give me a child until he is seven and I will give you the man" is the often-quoted Jesuit mantra. The early Up films were obviously critical of Britain's class system, particularly in suggesting the children from poor, working class environments were fated to struggle in conditions similar to their fathers and their fathers' fathers, while those from wealthy families enjoyed by birthright lives of leisure already locked firmly into place.

The 138-minute 56 Up is another captivating entry. In one sense they're all of a piece. First-time viewers are strongly advised to watch the films in order, though it's possible to watch 56 Up without having seen any of the others. One of the effects of the series is that those who have watched it over the years, especially for those of us within 10 years of either side of its participants, is that one feels a strong empathy for these people we feel we come to know on some level, and who have graciously placed nearly their entire lives under an international microscope.

56 Up is unexpectedly hopeful, especially compared to some of the alarming developments in earlier Up films, and despite the kinds of life-altering challenges one associates with late-middle age.

This reviewer did not receive final product, but rather a screener with particularly annoying, endlessly repeated declarations that the DVD was "the property of First Run Features" superimposed in large font every eight minutes (that's 17 times over two-and-a-quarter hours), and for a significant length each time. So distracting was this after about 20 minutes in I was ready to chuck it in the trash and refuse to review it. First Run Features might seriously want to rethink this screener format. Also, what I saw had no menu screens, no extra features, so I'm unable to evaluate anything other than the documentary itself. 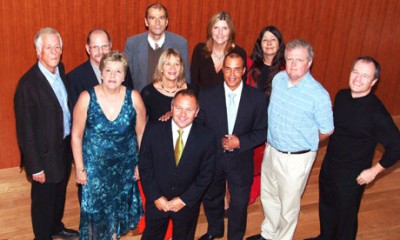 Two themes emerge in 56 Up. The first is an expression of frustration by the participants, discussed to some extent in the earlier films though more so here, of how the series through its editing or simply time limitations has distorted or completely misrepresented whom these people really are, tending to fall back on class stereotypes. One makes the interesting argument that their onscreen "characters" bear little resemblance to who they are in real life, but that each character more or less accurately captures one facet of British society.

One participant, Neil, who during the middle years of the Up series suffered from admitted mental illness and, for a time, became homeless, notes the voluminous mail he's received from viewers who presume to understand the intimate details of his life when, he argues, not one of those claiming to know "exactly how you feel" ever has. Conversely, Neil's previously stated efforts to have his writing published have gone nowhere. Despite the international audience following the Up films, there's been not one serious offer from anyone, though he does concede he's received other offers of speaking engagements that are a direct result of the films.

Similarly John, the privileged seven-year-old, later Oxford-educated barrister (and, later still, QC, i.e, Queen's Counsel) has continued with the series partly to promote his Bulgarian charities, while Peter, absent from the series since 28 Up, makes an unexpected return to promote his band, The Good Intentions.

Over the years John, fairly or unfairly, crystalized the image of upper-class British snobbery while Peter quit the series after the (right-wing) tabloid press attacked his candid criticisms of Thatcherism. In 56 Up John and others argue that the series' premise of a Dickensian (his words) class system was inaccurate even in 1964, and completely absurd by the 1980s.

However, the long-term effects of Thatcherism (and, as one notes, Tony Blair) and the more recent global recession have taken their toll on majority of 56 Up's participants, who find themselves far less settled and financially secured than they expected by this point in their lives. Compared even to the generation immediately preceding the Up kids it's shocking how many jobs most have had through the years, and how unstable their employment status has become. Adult children, unable to secure a living wage, are in several cases living with their 56-year-old parents, they in turn often having to look after their grandchildren while their own children work or look for work.

Viewers like myself, eight years behind the Up kids, watch the films with a kind of fascination and a little bit of dread, as previews of the physical aging process and the kinds of issues one associates with growing older. In 56 Up parents, in-laws, former and present husbands and wives become sick or die; grandchildren have terrifying health crises; they struggle to find work at their age; and they themselves deal with chronic health problems or worry about sudden, devastating health crises that may strike them at any moment.

And yet 56 Up is rather amazingly hopeful, with most of the participants at peace with where their lives are today, accepting what comes, and enjoying what life has to offer them.

The screener received for 56 is difficult to assess, partly because it's incomplete, with no menu screens, no audio or subtitle options, and no Extra Features. The show appears to have been shot in high-def, with clips from older films originally shot in a variety of formats, including 16mm. The stereo audio was fine, up to contemporary television standards.

When and if final product is received a more thorough review of these components will follow.

The late Roger Ebert regarded the Up films (taken as a whole) as one of the 10 Greatest Films of All-Time, which I'd have a hard time disagreeing with. See them from the beginning, with the latest, 56 Up, another invaluable chapter in this continuing story.