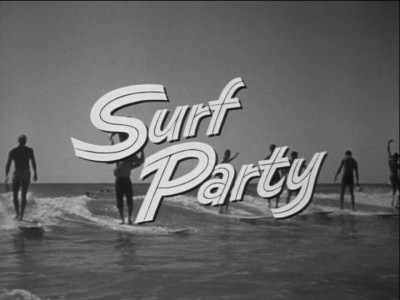 
The Film
In 1963, the film Beach Party, starring Frankie Avalon and Annette Funicello, created its own genre of teen beach movies that lives on decades later, with the Disney Channel putting a post-modern spin on the concept with their Teen Beach Movie, which puts teens from today into a version of one of yesteryear's beach movies. The reason they maintain their place in pop culture, even if they aren't made very often, is the simple joy of the concept, which centers around surf, sun and fun, a combo that, while a touch corny, is hard to argue with.

But I have a confession to make. I've never actually made the conscious decision to watch a surf movie before. Yes, I've seen bits and pieces of many of the genre's classics, like Beach Blanket Bingo or How to Stuff a Wild Bikini, but I had never sat down to watch a beach movie from start to finish before (unless you count Back to the Beach, the Avalon/Funicello surf parody from 1987, which I can see is ridiculously expensive on out-of-print DVD.) I probably could have made a better choice for my first attempt than singer Bobby Vinton's first acting performance, Surf Party.

I knew I was in trouble the moment I noticed that the film is in black and white. Color was already quite common at this point (though many artistic films from that time, like 8 1/2 and Lord of the Flies, were shot in black and white) and Beach Party, which "inspired" Surf Party, was a color production. The idea that a surf movie works without the colors of the sand and surf, or the hues of the clothing, is preposterous now, and goes to show what a cheap quickie of a production this was. That the story, which follows three girls visiting California, where the one's brother lives, barely has enough plot to string together the film's many musical numbers is the rest of the proof. 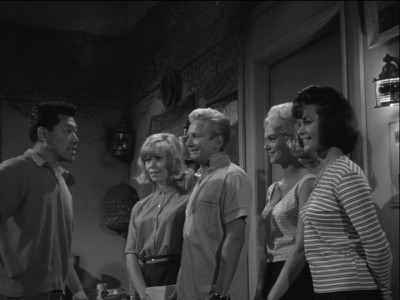 The brother, Skeet (Jerry Summers) is a no-good surf punk who leads a gang of wave-riders called the Lodge. A local policeman is on his case, hoping to catch him and send him packing, but he never does anything wrong (which is what makes the whole thing hard to understand.) Meanwhile, the girls pair off with some of the guys, including Len, a local surf-shop owner, and Milo, a young new surfer on the scene (played by ridiculously too-old Ken Miller, who's about twice the appropriate age for the part.)

There's also some sort of drama when Milo "runs the pier" (surfs under a pier) in an attempt to join the Lodge. This leads to a oddly cautious fight, and eventually trouble for Skeet, but to be honest, nothing much seems to have changed in the world of Surf Party from the opening titles to the final "The End." Things happen, but nothing really matters, in part because none of the actors seem to be able to portray the reactions that would result from any kind of advancing of the plot. The mediocre filmmaking around them, which includes mismatched stock surfing footage and lame fakes of surfing, doesn't help either.

While the story falls flats, the music is, at the very least, interesting, with a handful of surf songs that truly do rock. This is pretty much a musical, with at least nine musical numbers performed as part of the film, including a pair of performances by The Astronauts and the Routers, two of the best in the film. Beyond those performances though, the music is all over the place, from ballads like Vinton's "If I Were an Artist" to the crazy gospel "Glory Wave" (which is quite an experience, watching a room of white-bread surfers perform a conga line to an old spiritual.) Like pretty much everything else in this movie, the music goes halfway before crashing out in a wave. 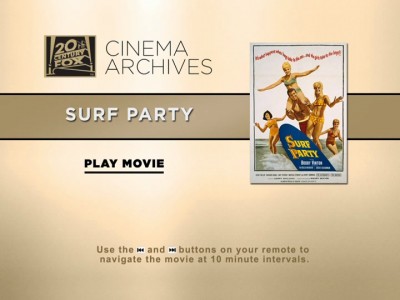 The DVD
This is the first time I've checked out one of Fox's Cinema Archives MOD releases, and if this is their standard presentation, there's no complaints here. Packaged in a standard keepcase with templated cover art, the disc (a DVD-R) has a simple, stylish design that's better than pretty much any retail Paramount disc. The disc features a static full-frame menu with an option to play the film. There's no scene selection, but the film has chapter stops every 10 minutes. There are no audio options, no subtitles and no closed captioning (the one element that could use an improvement.)

The Quality
Most will not notice a difference, but this film has been squashed from the Academy aspect ratio of 1.37:1 to fit a 4:3 presentation (a note appears before the film.) There are no obvious issues because of this, and overall, the film looks solid. There's a flicker to the brightness that's obvious if you look for it, and there are a few specks and scratches here and there, but for the most part it looks great, if slightly dark at times.

The Dolby Digital 2.0 track handles the sound well, but there's nothing dynamic about it, as it just doubles up the film's original mono soundtrack. All the songs come off clear and strong, and there are no issues with the dialogue or the atmospheric sound in the outdoor scenes.

The Extras
This disc has as nearly as many extras as the film has plot points, which means none. 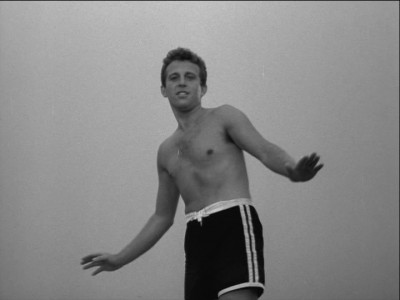 The Bottom Line
I can't say I expected much from this film, but it delivered just that, with a plot that meanders when it actually exists and acting just this side of Ed Wood, Jr. The lack of color is just shocking considering the setting and when it was shot, while the music features some great surf rock and an odd mix of other genres. The presentation is rather impressive, but as with most MOD releases, there's nothing extra, so you better really like this film if you're going to pick it up.