What do you get when you take have an Iranian writer/director make his English language debut with an American martial arts action film and cast said action film with a former carpenter, b-movie icon Robert Z'Dar, and cast of faces generally never seen again on-screen? Well, you get an awful movie, of course. "Samurai Cop" is a bad movie and not a single case can be made for its technical merits. The product of writer/director Amir Shervan, who in addition to this notably churned out the James Mitchum (there's something about the sons of Robert Mitchum and crappy d-rate action films) snooze fest "Hollywood Cop" and cult classic waiting to be rediscovered "Killing American Style" featuring not just Robert Z'Dar but Jim Brown. The plot is simple: a Japanese gang is up to no good in Los Angeles and its up to Joe Marshall (the late Matt Hannon), a long-haired, lone-wolf from San Diego, trained by the "masters in Japan" in the Samurai ways, to stop them. 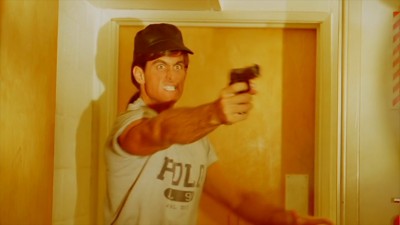 While "Samurai Cop" may be a stunning exercise in incompetence, beginning with an audio mix that is maybe a few notches above cable access and ending with a wig for a lead actor that appears and disappears in scenes at random, and you have a recipe for a cult classic that would have been a perfect fit on "Mystery Science Theater 3000." Shervan shows not an ounce of technical skill as a director, employing shaky camera work that struggles to focus on the proper elements in an action scene, to employing a lead actor, Hannon, whose previous credits included work as a carpenter on the remake of "The Blob" and "Night of the Creeps" as well as supporting role in "American Revenge." Hannon is obviously, cast for his looks, which give off a strong action hero vibe, if one can get past his flowing dark mane of hair (the reference to the wig above is due to Hannon having cut his hair at some point during production and reshoots and pickup shots forced to utilize a Halloween store quality substitute). Like the entire female cast of the film, looks are all Hannon has going for him as he struggles to make it through simple dialogue without looking at obvious off-screen cue cards, fumbles through shootouts, and the less said about his on-screen fighting skills the better. He is the perfect storm of incompetence and "Samurai Cop" is made all the better by his complete obliviousness to the craft. 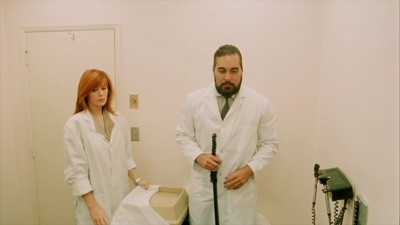 The film itself barely passes for a b-movie, with unnecessary plot twists in a story that, quite frankly goes nowhere, simply biding time until the inevitable showdown between our San Diego Samurai and lead henchmen, Yamashita (Robert Z'Dar, yes, Robert "The Chin" Z'Dar is supposed to be Japanese in this film). What we do get to pass the time is a cornucopia of clichÃ©s including multiple, unnecessary, awkwardly filmed and overly long sex scenes (two featuring Hannon, one featuring Z'Dar and the surprisingly least horrifying featuring Gerald Okamura), low-speed chases, stilted fight scenes artificially sped-up to compensate for a lack of training on Hannon's part (his mano y mano brawl with Okamura is painful), multiple scenes of scheming and veiled threats, the angriest police captain in screen history, and a token black partner played by Mark Frazer who seems to be the only one who realizes he's in an awful movie. Frazer's cringe worthy dialogue is delivered with a healthy dose of cheese and the multiple cuts to his gut busting facial expressions at quick quips from our hero are among the highlights of the whole affair.

By the time "Samurai Cop" comes to a close, 96-minutes after the films stirring Casio keyboard meets SNES soundtrack roars onto screen, you'll either devour the film for what it is, a stunning pile of crap that you can't help but viciously mock and enjoy, or leave feeling dejected at the sheer thought that such a stunning pile of crap was funded in the first place. Truth be told, any sane person is going to feel a bit of both. "Samurai Cop" is getting a bit of minor nostalgia/cult resurgence as of late and this DVD re-release (the highlight being an anamorphic widescreen transfer from the original negative) should be a mandatory addition to the library of any b-movie fanatic and would make a great double feature with the technically more adept by comparison, "Miami Connection" a film very much in the same vein.


The 1.85:1 anamorphic widescreen transfer truly lives up to the box proclamation that it was from the original 35mm negative. Detail is surprisingly striking and when consistent, color levels can be natural, although some scenes suffer from a red hue, a defect in the original processing. There's a consistent level of minor to moderate print damage, but bottom line, for an ultra low budget, late 80s b-action film, "Samurai Cop" looks pretty damn striking and the incompetent production values are given every opportunity to shine.


The Dolby Digital English stereo audio track is in extremely rough shape unfortunately, although this does add to the charm of the film's sub-par production value. There's a regular very faint hiss or crackle from time to time that permeates the quieter moments in the film. Most frustrating though is the wholly inconsistent mix that's likely a result of the original production. Dialogue from character to character fluctuates from a whisper to an audible roar resulting in high-end distortion. Sound effects are often overpowering and shrill. I won't lie and a few lines of dialogue are completely lost if you don't know to listen close.


The extras consist of three actually interesting interviews with stars Robert Z'Dar, Gerald Okamura, and cinematographer Peter Palian. The interviews are around 30-mins each in length, allowing each participant to tell the stories of their career; Z'Dar's is conducted via Skype so the quality is considerably lower. There's also a still image gallery of behind the scenes photos and publicity items from the film.

To make a long story short, the film is awful but amazingly compelling as a cult classic exercise in "doing it wrong." This new DVD is likely the definitive "Samurai Cop" experience to grace any home video format and its technical flaws are inherent in the very production quality that adds to the charm of the film. Highly Recommended.