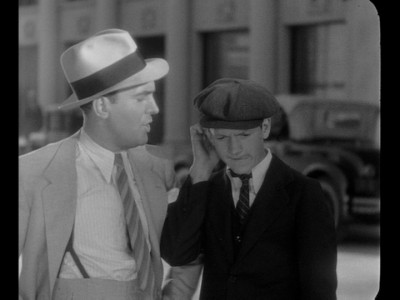 Every once in a while on The Simpsons, there's a glimpse of an archaic, badly produced educational film being shown in a classroom, which always features a googly-eyed, sickly sweet and naïve little urchin learning about DNA, the food chain, local history, etc. It's a parody of an unimaginative, low-production-value cliché so familiar to every former schoolkid or viewer of the kind of bad B-movie they used to show mid-afternoon and late at night on network TV that a specific example seems uncalled for. But if you ever need a tangible example, look no further than the 1932 cheapie Hell's House, whose hero is cut from the same comically simplistic, stock-character cloth. Surely, Hell's House has only been preserved for us by the Library of Congress and released on this new DVD edition because of the supporting roles played by Bette Davis (as the kindly, unsuspecting girlfriend of a conscience-stricken bootlegger) and long-running character actor Pat O'Brien (as said bootlegger), but the real "star" of this show -- the one with whom we spend by far the most time -- is a cloying teen boy whose voice is still cracking (played by one Junior Dirkin) who, orphaned by a freak highway accident, is exiled from his healthy rural existence on a farm to the evils of the big city and, due to the bad influence of O'Brien's small-time criminal, an unjust stint at a Dickensian juvenile-delinquent prison workhouse. 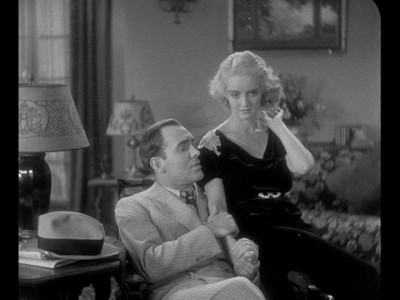 Durkins's wide-eyed, thickly laid-on earnestness as "Jimmy" (also always the name of the kid in those Simpsons educational shorts), fully half of whose vocabulary seems to consist of "gee whiz" and "golly," is matched by the tone of the film's would-be socially-conscious muckracking regarding the bad conditions and corruption within the juvenile-correction system it depicts, which is both sanitized in a way that makes it unbelievable and dull, and manipulated into such stark black-and-white terms that only a child (and one who hasn't seen many movies or read many stories, at that) wouldn't catch onto its obvious lessons long before they're made over-explicit by a tragic fate for Jimmy's bunkmate at the reformatory/workhouse or the ostensibly moving (complete with weeping violins -- another well-known cliché whose actual provenance you can discern here) last-minute doing of the right thing by the bootlegger. The picture is a topical, well-meaning alert for sheltered adults about a then-contemporary and urgent social problem, and a morality play (moral worn squarely on its sleeve) for children about the importance of loyalty, family, and obeying one's conscience. 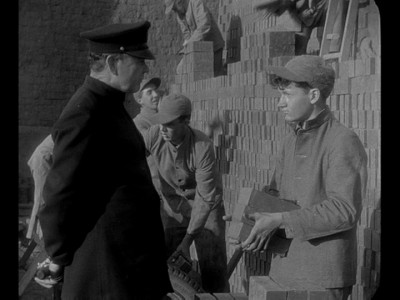 Hell's House has long since lost its topical relevance, of course, and its artistic value is fairly negligible (the skilled, competent, occasionally inspired direction by Howard Higgin and cinematography by Allen G. Siegler are rendered wholly subservient to Higgin's, Paul Gangelin's, and B. Harrison Orkow's sappy, sentimental, often blunt and clumsy story and script, with its reliance on autopilot melodrama and cliché). Its remaining importance, then, can only be on the level of historical and sociological interest, both in cinematic terms (with its tantalizing glimpses of a young Davis, gamely playing a minor "character" clearly and not very smoothly shoehorned in to provide some feminine allure and romance, which of course Davis offers effortlessly) and as an example of a picture that holds up a sort of mirror, however spotty and distorted through timidity and naiveté, to the joblessness, poverty, crime, and insufficient governmental response that weighed heavy on the minds of the Depression-era American public. It actually is interesting in those studious contexts, but that's not really enough to redeem the film's mimeographed dramatic and aesthetic disposability. It's a relic, a specimen of the half-exploitative, half-crusading, fairly simpleminded bottom-of-the-bill picture of the time, something it might be good for a film student's (or critic's) frame of reference, but not for any actually gratifying entertainment or pleasure. It is, in short, the kind of film that's probably more worth preserving than it is, for most of us, worth watching. 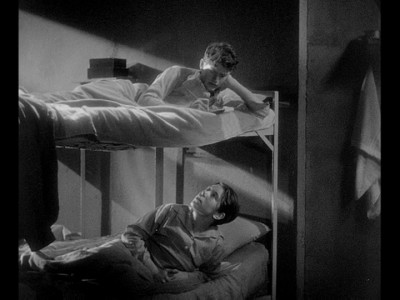 
Using a Library of Congress-facilitated HD restoration of a print apparently discovered in Bette Davis's private collection, Hell's House comes with a scrupulous disclaimer about deterioration of the film's first reel, but it's actually not so bad: There is some flicker, a few rough spots, and a few missing frames, but it's entirely watchable. The rest of the film (presented in an aspect ratio of 1.33:1) has minor signs of wear and age throughout, but it's overall well-preserved and looks quite good for such a rescue job. The transfer itself is excellent; there are no compression artifacts such as aliasing or edge enhancement, and a natural-looking, celluloid-like texture remains, with no overuse of digital clean-up tools to strip it away.


The disc's Dolby Digital 2.0 soundtrack does a fine job of transmitting the film's early (1932) mono sound. The level of tinniness, muffling, and blare sounds to be an endemic byproduct of the technology of the times; the care that's been taken with the audio by contemporary technicians makes for a faithful, clean, and clear experience of the film's original sound. 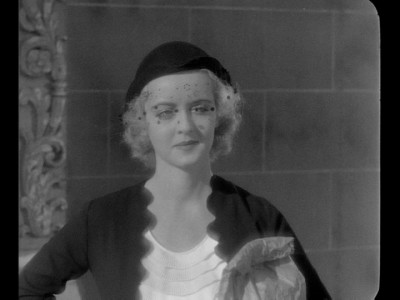 Of more historical than cinematic value, the 1932 quickie social-problem weepie Hell's House is a C-picture, a simpleminded "exposé" that happens to feature intermittent appearances by future screen star Pat O'Brien and future legend Bette Davis. The romance and glamor of O'Brien and Davis's flirtation (almost entirely superfluous, it has to be said, to the film's story) plays well and is innately appealing, but seems out of place when the bulk of the picture -- competently but conventionally directed by Howard Higgin -- concerns orphaned farm boy Jimmy (Junior Dirkin) on the bootlegging O'Brien's conscience. Which contains more dangerous excesses of corn, the very ginger tearing off of the lid vis-à-vis the shortcomings of the juvenile-delinquent/prison-workhouse justice system, or the morality play around the bootlegger's thinly disguised heart of gold, would be hard to say. Either way, Hell's House (never nearly as potent, let alone lurid, as that title might suggest) makes you wade through a lot of gooey cliché and sap in order to get to its infrequent star-power good stuff. It's a minor curiosity that only needs to be owned by the most die-hard Bette Davis completists; otherwise, Rent It for its historical interest, its stars-on-the-rise, and its not-inconsiderable amount of unintentional comedy deriving from its overdose of wide-eyed wholesomeness.