Synapse Films // R // July 9, 2013
List Price: $29.95 [Buy now and save at Amazon]
Review by Stuart Galbraith IV | posted July 27, 2013 | E-mail the Author
Hands of the Ripper (1971) isn't on anyone's list of favorite Hammer horrors, but the film is far better-produced and more ambitious than most of the company's films of the 1970s, and it's certainly unusual, some accurately describing it as Hammer's Marnie (1964), referencing the similarly-plotted Alfred Hitchcock flop now somewhat better regarded today.

Some of the advertising for Hands of the Ripper was highly misleading, suggesting star Eric Porter was portraying the infamous Jack the Ripper. In fact, he plays a Freud-influenced London doctor attempting to cure a psychologically scarred young woman who, as it happens, is the daughter of the Ripper, though neither realizes this for most of the film.

The problem with the picture is conceptual rather than executional, which is above average for Hammer during this rapidly ebbing period. The plot requires an intelligent, moral hero to behave with such extreme irresponsibility, even stupidity, that he repeatedly if indirectly causes the death of most of the cast. The movie wants to have it both ways, as a straight psychological thriller and as a horror fantasy about literal spiritual possession, with neither coming off well. The heroine is a pitiful victim throughout and, ultimately, the movie is actually rather depressing precisely because of its modest effectiveness. 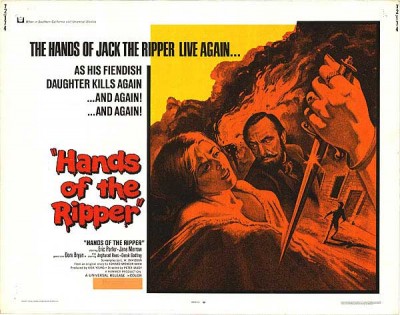 The movie does indeed open with Jack the Ripper played, surprisingly, by an uncredited actor, despite his several lines of dialogue and total screentime, about five minutes. And, even more surprisingly, none of the dozens of indefatigable Hammer experts out there have been able to identify him, like the Ripper himself. However, in line with some of the theories about the notorious serial killer, here he is depicted as an English gentleman of presumed breeding and wealth, though severely scarred all over his face and hands, suggesting syphilis.

The prologue has the Ripper rushing home after one of his murders, bloody hands startling his wife, heretofore unaware of her husband's secret, and his murder of her within sight of their young daughter, Anna.

Fifteen years later the now adult Anna (Angharad Rees, who died last year) has been adopted by a fake medium, Mrs. Golding (Dora Bryan). Dr. Pritchard (Eric Porter), a skeptic, attends one of her seances, while another guest, wealthy politician Dysart (Derek Godfrey), pays Mrs. Golding for the privilege of deflowering Anna. However, during his clumsy attempts to seduce her and the medium's intervention, Anna is put into a trance-like state by flickering light and into a murderous one when the medium gently kisses Anna on the cheek. These actions trigger flashbacks to her mother's murder, echoing the Ripper's similar embrace of Anna just as he's murdered the mother. Suddenly possessed by his evil, Anna impales the medium to a bedroom door with a fireplace poker.

Despite this, Pritchard believes he can cure Anna, whom he theorizes is suffering from some form of schizophrenia. He offers her a true paternal love long denied her, despite an awkward, Hammer-imposed nude scene in which both Anna and actress Rees are obviously uncomfortable appearing nude in Pritchard's presence.

Pritchard's son, Michael (Keith Bell), and his blind but independently-minded bride, Laura (Jane Merrow), turn up for their imminent wedding, but mostly they are on the sidelines as a parade of incredibly unlucky folk flicker lights in Anna's eyes then foolishly kiss her cheek, sending her into inexplicable, sudden murderous rage.

These murders are notably gruesome in this uncut version. The picture was toned down for release in both Britain and in America, though not the same ways. This version of the film has all of the original gore, which is at the level of Hammer's other horror films of the period, e.g., The Vampire Lovers and Twins of Evil.

Generally though, there's a classiness to Hands of the Ripper that's unusual for Hammer by this point. Eric Porter especially brings a unique subtlety and sensitivity to the film. And all the more surprising as Hammer regular Peter Cushing was the obvious casting choice, not pock-faced Eric Porter (whose best remembered roles include Professor Moriarty on the Jeremy Brett Sherlock Holmes series; Porter, like Brett, was brilliant).* Porter is superb throughout even pulling off several dramatically absurd bits near the end that would make most actors unavoidably look ridiculous.

Seriously damaging most of Hammer's horrors of the 1970s was their increasingly cramped and obviously cheap sets. Hands of the Ripper had the good fortune of being made at Pinewood where they had access to backlot sets still standing from Billy Wilder's lavish The Private Life of Sherlock Holmes (1970). This and other clever use of exteriors really opens up Hands of the Ripper in a way that's almost unique to this period.

Synapse's Blu-ray + DVD Combo Pack of Hands of the Ripper is excellent throughout. The Region A Blu-ray presents the film in its original 1.66:1 widescreen format, in 1080p, and here even the title elements are sharp, bright, and colorful showing little signs of age or damage. The DTS-HD Master Audio, 2.0 mono English only, is likewise above average, the disc includes optional English subtitles, and a DTS-HD MA music and effects track has been tossed in a nice supplement.

The primary supplement is "The Devil's Bloody Plaything: Possessed by the Hands of the Ripper," a roughly half-hour featurette from director-editor Daniel Griffith and his Ballyhoo Motion Pictures. Everything they did wonderfully well in the past is retained here while the pacing this time is exactly right. Using most of the same Hammer commentators as in previous Ballyhoo shows, this one hits all the salient points while interest remains high throughout.

"Slaughter of the Innocence: The Evolution of Hammer Gore" is not a documentary featurette but rather a clever motion-still gallery of chronological images from Hammer's library, much of it looking really great in high-def. Trailers and TV spots are included also.

When the film first aired on American network television, a prologue was added featuring Severn Darden. The video is believed lost (in the Universal fire a few years back) but an especially rough recording of the audio is presented here. Wish there was more but it's certainly better than nothing.

I'd seen Hands of the Ripper only once before and, partly due to the quality of this presentation, enjoyed it a lot more the second time around, even though it's still deeply flawed for reasons described above. But it is interesting, and for that, its great video transfer, and for all the worthwhile supplements, it comes Highly Recommended.

* To say nothing of the Nosferatu-like fingernails actor Porter apparently kept throughout his adult life. The uncomfortably long, nicotine-stained nails are highly visible in several close-up inserts.