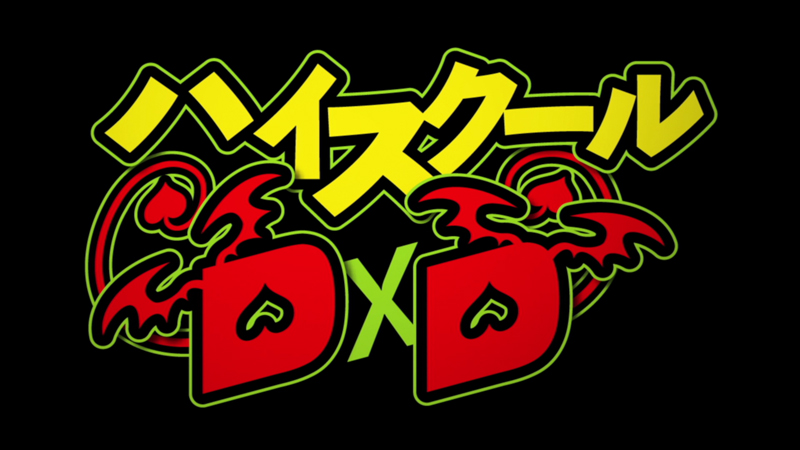 
The Show
Game of Thrones is a rather popular series, set around battles between groups of arch rivals, with supernatural elements throughout. But a decent amount of the show's success has to be attributed to the nudity and sex that is a frequent element. There are entire blogs dedicated to the show's nudity. Yet no one judges it as anything but an acclaimed fantasy show. But what if the creators approached the nudity with a perspective more in line with that of a heterosexual boy in his early teens just discovering the female form. Then you might have something akin to High School DxD, the story of Issei and his never-ending hunt for a peek at some sweater puppies.

High School DxD looks a lot like a harem comedy, as nerdy Issei is surrounded by beautiful women with overflowing chests, but A) it's not all that funny, B) Issei is not shy, but rather emphatically enthusiastic about these women, and C) they are all devils, waging war against both the angels and the fallen angels, for control of the universe. After an unfortunate courtship, Issei finds himself almost dead and soon thereafter a devil in the service of Rias, a member of one of the most illustrious devil families in existence. Over the course of this season, he learns to harness his new devil powers and finds himself in the midst of war with a crew of baddies from all sides. However his biggest battle is trying to maintain his composure when every woman around him is frequently naked and bouncing like a superball.

Harem shows are notorious for this kind of thing, but High School DxD takes it to an entirely new level. The perpetually horny Issei is blasted with eye candy over and over again, to the point where it sort of gets a bit embarrassing to watch. The bare breasts and protruding cameltoes are constant, and even when clothes remain on, and somehow the camera avoids an upskirt angle, nipples burst forth through tops and chests bounce and sway dramatically. Add to that a magical ability to rip girls' clothes from their bodies and you have a pervert's wish fulfillment. The series obviously recognizes this, as everyone chides Issei for his obsessions, even if the protests ring hollow, as they are often followed by a camera angle chosen simply to put more focus on another set of breasts. I couldn't possibly overstate how incessantly sexual this series is. 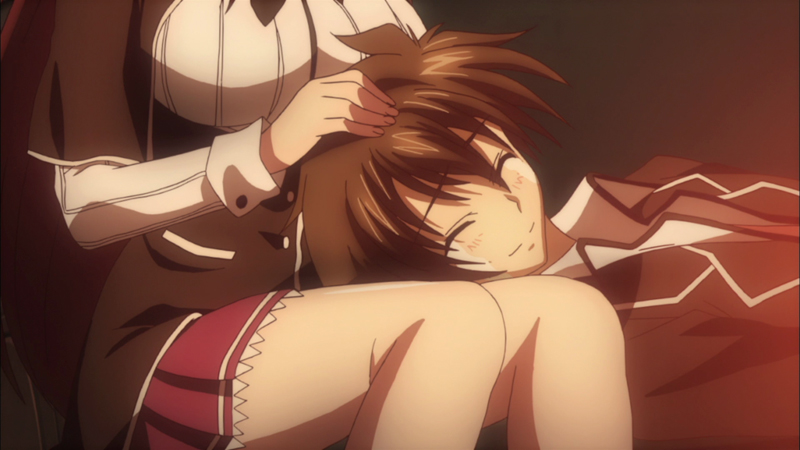 Eventually, once the story gets some traction, the nudity becomes more of an added-value element, cropping up simply as fan service, while the devils hone their plan and further their conflict with evil exorcists and with fellow power-hungry devils. It all leads to something called the Rating Game, which pits one devil's army against another's, with an odd chess construct placed upon it to help define the character's roles. After spending the first nine episodes exploring Issei's abilities and following him and Rias' crew on adventures, the final three episodes bring everything to a head, and the breast gags mostly fall by the wayside, making them the most entertaining of the run thanks to some pretty hardcore battle scenes. If the show could achieve such balance between the pervy nudity and fun fights this would be a much better show.

That's especially true because the characters are fun to watch, from the bad-ass Rias to her sadistic second in command Akeno, to small, quiet and rough (and hilariously deadpan) Koneko and slick swordsman Kiba. The one that stands out most of all though is Asia Argento (pronounced differently from the famed genre actress) a nun who ends up nude as often as any of the others. A former exorcist who finds herself drawn to Issei's more positive qualities, as part of what might be termed a love triangle with Issei and Rias, she manages to raise the perv quotient many levels all by herself. If these ladies had managed to spend less time in the buff and more time kicking ass, the times they did strip down would have had far more of an impact and the character development would have more time and a better atmosphere. Apparently, even with nudity, there can be too much of a good thing.

Though the show is mainly powered by the strange contrast between the persistent sexuality enveloping the series and the somewhat serious conflict that makes up the core of the plot, the show does dip its toes in the comedy waters from time to time, mainly via Issei and his horny high-school pals, who are constantly attempting to peep on their female classmates. However the sexual content is so pervasive and creepy (at one point while learning to be a devil, Issei runs into a crossdressing monster of a man, played entirely for laughs) that it mostly prevents any comedy attempted from working. Issei's friends, on the other hand, are just too annoying to be all that entertaining.

In regards to the dialogue. yet again Funimation has offered up a dub that's far more entertaining than the rather formal subtitle translations. Though the American version is far coarser in tone, makes Issei more obnoxious and makes some of the characters practically unbearable, overall, these characterizations work better with the portrayal of sexuality. If you're going to be ridiculous, you may as well push it to the limit, and the U.S. version pushes the envelope and then tears it to shreds. 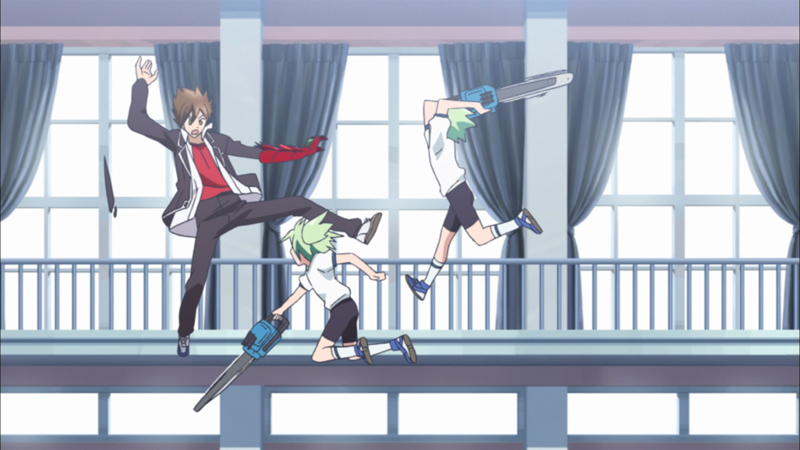 The Discs
Funimation's over-the-top packaging is here again, as the Blu-ray/DVD combo set includes four discs (two of each format) in a pair of standard-width, dual-hubbed BR keepcases, with dual-sided covers that feature character pin-ups. These arrive in a rather heafty cardboard slipcase (with an unglued back panel info sheet.) The discs feature animated anamorphic widescreen menus that offer an option to watch all the episodes, select shows, adjust the languages and check out the extras. Audio options include Dolby TrueHD English 5.1 and Japanese 2.0 soundtracks, while subtitles are available in English.

The Quality
The 1080p, AVC-encoded transfers have no obvious flaws to them, as they deliver some bright, vivid colors and a nice level of detail that shows off the show's fast-paced animation and some of the well-painted backgrounds. For the most part, the image is crisp and clean, with no noticeable issues with digital distractions, though things sometimes soften up (possibly due to style choices.)

The Dolby TrueHD 5.1 English track is well-produced, presents the dialogue clearly and free of any distortion, though there's not a great deal of surround activity, only making itself conspicuous during the big fight scenes, or when offering enhancement to the music.

The Extras
The bonus content kicks off with a pair of commentary tracks, with Jamie Marchi, Felecia Angelle and Terry Rogers on episode one, and Jad Saxton, Scott Freeman and Tyson Rinehart on episode seven. The first conversation with the ladies covers plenty of topics, including how the shows are recorded, the trouble with "smackiness" and the incredibly large focus on breasts in the series, as well as some talk about the plot. Angelle and Rogers are relative newcomers, which offers an angle for them to approach the track, while Marchi, who also wrote the English version, serves as unofficial moderator, guiding the way. Breasts remain front and center in the second track as well, which has a touch more boisterous tone, as the trio focuses on their characters, while also sharing some of their favorite parts of the series and talking about some unfortunate word usage in the recording both. Both tracks, like most Funimation offerings, have a truly fun feel to them.

Seriously, if the show is over-the-top in its depiction of nudity, the six shorts in "Fantasy Jiggles Unleashed" (or "Unleased" as it says on the menu) are just ridiculous, existing only to depict the ladies in nude and/or sexual situations, like Akeno spilling cream on her breasts and having Issei lick it off or Koneko molesting the other girls. At 22:23 in total (with Japanese audio only) it's basically like a bonus episode aimed specifically at fans' s more prurient interests. The most interesting thing is actually the adorable animation in one section of Asia's story.

Up next is the three-part "New Material from Ichiei Ishibumi! Fantasy Full-Blast Gentleman's Disc Club Promos" (8:55, with Japanese audio.) What all that means is not very clear, but it's basically an overview of the characters, focusing on the nudity, narrated by the character of Issei in the first piece, then joined by his two horny schoolmates, Motohama and Matsuda. There's a lot of repetition in the animation, and the dialogue borders on obscene in the way it approaches the ladies, particularly the third entry, which focuses on the "loli" characters, which are disturbingly referenced as "little sisters" as the guys lust over them. It's yet another moment where I think, "Oh, Japan…"

The rest of the extras fall under found materials, starting with another promotional video (2:11), a musical montage set to the show's theme song, naturally loaded with breast shots. Then there's a collection of 5 quick-hit commercials for the Japanese DVDs. These ads run 1:17 in total, and are just slight variations on each other. As is seemingly Funimation tradition now, the opening and closing themes (1:32 each) for the show are offered without the credits over them. I'm not even going to apologize for stating that the mirror gyrations in the closing theme are some of the sexiest animations I've ever seen. Talented artists at work.

Wrapping things up is a U.S. trailer for the series and a selection of eight other trailers. 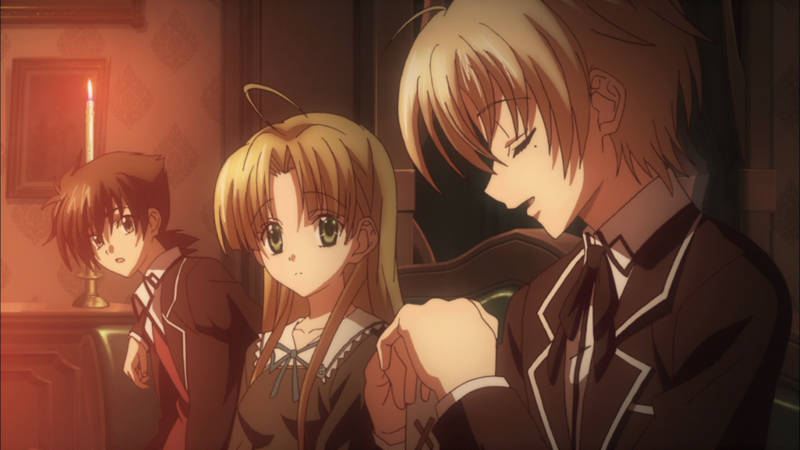 The Bottom Line
What looked like another harem comedy is actually more of a supernatural battle loaded with big breasts. If you enjoy ridiculous anime nudity and a silly fan service-focused storyline, this is not a bad way to pass a few hours, but it's not what I would consider funny. The set is presented with solid quality and a nice set of extras that should appeal to fans, making it a collection worth checking out, though expectation should be kept in check (unless those expectations are for highly-detailed animated nipples. Then, your expectations couldn't possibly be high enough.)