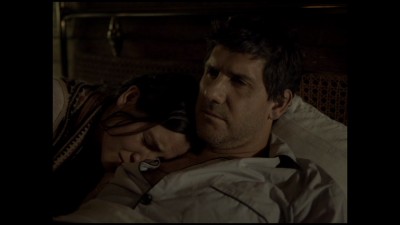 I suppose there's a certain degree of "shock value" to the work of the fascinating, tremendously gifted Mexican writer-director Carlos Reygadas. In films like his debut, 2002's Japón, or his despairingly gorgeous 2005 masterpiece, Battle in Heaven, a deadpan, unflinching, near-pornographic (except much too dispassionate) sexual explicitness vis-à-vis physically regular, unglamorous people (the elderly, the saggily middle-aged and/or obese, etc.) flows seamlessly with Reygadas's unerring eye for mystery and beauty wherever it may be found, in teeming, sweaty urban clamor, the clashing classes and unreconstructed Catholicism, or the remote villages and wild, unpopulated nature of his country. The same can be said of his latest well-aimed shot at cinematic profundity, Post Tenebras Lux (in Latin, "after darkness, light"): The bourgeois-bohemian married couple at the center of its elusive narrative, Juan and Natalia (Adolfo Jimenez Castro and Nathalia Acevedo) have true love but also a restlessness that leads them to both try country life (albeit in an incongruously rustic-McMansion house that sticks out amid their rural neighbors' relative poverty) and, in one of the film's many unexpected, back-or-forth temporal displacements, to try their hand at sophisticated swinging in a Parisian sex club the various "specialty" chambers of which are named after Continental philosophers. But the near-metaphysical essence of that orgiastic encounter at which Reygadas carefully constructs this sequence of anxious sexual journeying to arrive is just part of the proof that his willingness to seem indelicate or look unflinchingly past any modesty his characters may feel for themselves (or us, prudishly, on their behalf) is working light-years removed from the kind of childish, repressed button-pushing and gimmickry indulged in by more notorious, thickheaded sensationalists like Irréversible spawner Gaspar Noé. He's not trying to titillate or test our endurance by rubbing our noses in something he himself moralistically considers "dirty," but rather negotiating some very complicated aesthetic and representational channels to see if there isn't, as he suspects, some point at which what we consider brutal, "ugly," or savage and what we consider beautiful and edifying don't at least connect and harmonize, if not actually collapse into one another. 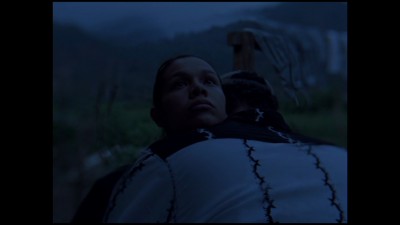 Post Tenebras Lux, too, has its forays into the unusually graphic, and it is in a very significant way Reygadas's most extreme film to date, but the latter actually has nothing to do with how uncomfortably explicit it might become (it's far from his most X-rated work). The shock here is that Reygadas has taken the pane depicting the strivings and (d)evolution of Juan and Natalia's family (also including two toddlers, a boy called Eleazar and a girl called Rut, both played by Reygadas's own children of the same names) and smashed it into asymmetrical shards that he's then rearranged in an order and with an eccentric focus that absolutely and unrelentingly defy basic narrative rules of chronology, psychology, cause and effect, or continuity/consistency of point of view. The film's scrambling of time is not narratively motivated at all (this is not Memento; it stubbornly refuses, ever, to "come together" in that way), but a purposeful downplaying, a diminution of the primary role of narrative itself: The dramatic moments for the family -- Juan and Natalia's Parisian visit; a big, affluent family Christmas party in the city years in the future; the crime committed by El Siete (Willebaldo Torres) that changers their rural existence forever and branches off into the poor, rural, servant-class El Siete's own heartbreaking story of marriage and family; a day at the beach when Eleazar and Rut appear to be in their early teens; footage from an English boarding school's violent soccer matches (is a teenaged Eleazar, or perhaps a younger Juan, a privileged Mexican enrollee among this unhappy, riled and combative group of international rich boys? Impossible to say with any certainty) -- play out more or less realistically but are never ordered to reveal a timeline or culmination of any dramas. And sometimes that more-or-less realism becomes suddenly, markedly less: Bookending the film is a scene in which a well-appointed home (possibly the dwelling of Juan and Natalia's family unit before or after they've been in the country) is stealthily entered by an infrared-silhouette devil, complete with horns and pointed tail, toting a toolbox, to cause who knows what mischief; and one character's fate, drawing the film to its very enigmatic close, involves an assuredly, technically perfectly played out (via subtle, amazing special effect), physically impossible sort of harakiri that, as in a Romantic poem, brings on a torrential rain -- entirely unrealistic, compelling externalizations of overwhelming, unbearable emotional states. 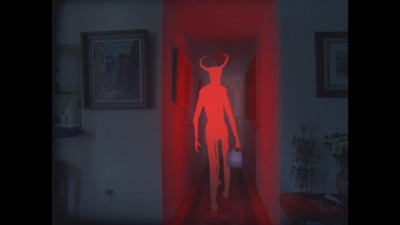 The key to what's going on in Post Tenebras Lux, the way to understand (though hardly "make sense of") it, is in its surpassingly beautiful, experimental visual style. There are patterns here, discernible and evocative recurrences highlighting larger concerns than specific familial relationships, individual emotions, tricky marital and coming-of-age issues, etc.: Reygadas has no solutions to the problems of humankind's ambivalent coexistence with the nature from which we emerged and alienated ourselves, or where "evil" -- the compromise and failure of what is or is meant to be benevolent and good -- originates, but these are the matters he's trying to shed some light on through the prism of disordered and ultimately abandoned narrative. In collaboration with cinematographer Alexis Zabe (who also shot the director's previous film, Silent Light) Reygadas orchestrates an image that's made not less but so much more vivid through a strange distortion effect that most often blurs the edges of the frame in such a way that everything appears at a decided remove, as in a dream, or like viewing these ambiguous but striking snatches of human life and nature and super-nature in their various forms through some special sort of magnifying glass. With this ravishing, puzzling, bold appeal to our eye first and foremost, bypassing our rational/logical story-sense, Reygadas signals the terms on which he means, his disorienting, even maddening narrative emphases and elisions notwithstanding, to hold our attention and offer unexpected forms of "suspense" and gratification. 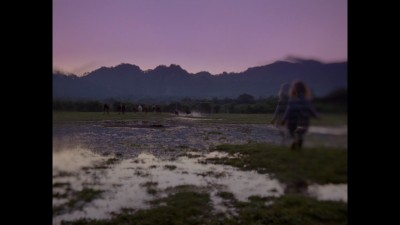 This all comes together not only as a force unto itself, but as a progression, a further deepening of Reygadas's already-proven brilliance. The only other contemporary filmmaker who, often using similarly unusual, inspired photographic distortions, has so successfully dampened the narrative drive of his films to draw out such a metaphysical kind of magnificence is the great Russian director Alexandr Sokurov (this is especially true of Whispering Pages and Mother and Son); like Sokurov, Reygadas (along with Michael Haneke and Lars von Trier) belongs to a select, courageous group toiling fruitfully under an anxiety of influence implanted by the (aesthetically and spiritually) revolutionary cinéaste Andrei Tarkovsky (Solaris, Stalker), whose masterpiece The Mirror -- free-associatively structured biographical fragments that evoke, gorgeously, wordlessly, formally, emotionally, non-narratively, vast philosophical, historical, and cultural meanings -- Post Tenebras Lux does not copy but resembles in some very salient ways. It's nothing less than a cinematic experience that demands, if you're willing, that you dust off some wrongly neglected part of you to bypass its muffled, marginalized story in order to properly respond to its other, frightening, dazzling, magnificently serious implications. Whether or not you're in any way religious, it reaches and awakens whatever's in you that you might consider a soul, and in any case, it's at least a holy enough rite to reaffirm one's faith that Carlos Reygadas is one of the best, most vital and fearless filmmakers in the world. 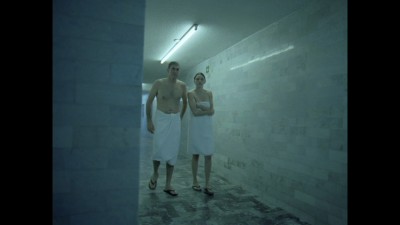 
This 1.33:1 aspect-ratio transfer (the acceptable, only minutely diverging DVD approximation of its original 1.37:1 AR) is very good, with all of the often lush and diverse colors and skin tones in the image (the opening shot, with a child roaming a muddy field of reflective pools while a rosy dusk looms in the sky overhead and a storm brews, is a lovely and entrancing example of how this photographically very rich film has been kept that way via this transfer). There may be some intermittent moments of slight over-smoothing via DNR (unlike many of the director's films, this one was shot on 35 mm, not digital), but nothing offensive, and the picture retains a healthy celluloid-like quality for the most part, with very few, and even then only very minor, instances of compression artifacting (no aliasing at all, but some occasional very minor edge enhancement/haloing).


The Dolby Digital 2.0 soundtrack (in Spanish and French with non-optional English subtitles) conveys all dialogue and music, and most importantly the deep, rich, and often ominous natural soundscape of the film with full range and detail (you feel the rumble of the strong seashore wind, ditto the thunder, while the falling rain sounds crystalline), and no distortion or imbalance at any point.


--Just the film's U.S. theatrical trailer and a few other previews for Strand Releasing titles such as Paradise: Love. 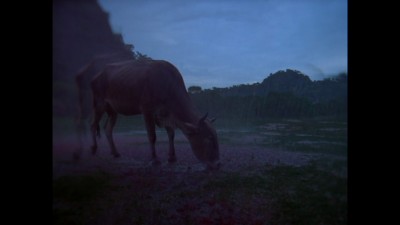 To an even further extent than his previous, at once rudely earthy and metaphysical provocations, the latest film from visionary Mexican director Carlos Reygadas presents the viewer with a challenge, a gauntlet thrown down. Our default desire to make narrative sense of its very loosely gathered-together fragments of story is, as far as I can tell, meant to be thwarted, trained out of us by the film's stubbornly opaque structure, at least insofar as it concerns a sequence of events in the lives of its protagonists -- the mother and father and two children of a well-off, bourgeois-bohemian nuclear family settled for a child-rearing stretch in a pretty house, surrounded by Nature in all its un-human manifestations, somewhere in Mexico far from the crowded and chaotic urban centers, where they remain vulnerable nevertheless to many kinds of trouble, both prosaic and singularly uncanny. We can perhaps see where the pieces of Post Tenebras Lux's domestic-drama story (very vividly, immediately rendered, on a scene-by-scene basis anyway, despite the overall seemingly random fragmentation) might have fit together, but Reygadas never really lets them meet, instead patiently holding them up, one by one and in a willfully arbitrary-feeling order, to the light. It's profoundly frustrating for the part of us that wants the payoff -- the chronology, the cause-and-effect, the "sense" events and characters should make, psychologically and narratively. But looked at another way -- a way the film's incredibly sensuous surfaces; the sheer, ravishing power of its sometimes frighteningly strange images; and the graceful elisions of its cutting conjoin to easily, luxuriously allow if you let them -- it's a great liberation from those old expectations and a stretching out, perhaps uncomfortable but boundlessly rewarding, of our story-hunger into some finer, perhaps more poetic or musical, mode of reception. Reygadas's pointed neglect of our perceived "need" to know certain things is actually generous; it frees us to be affected by these disconnected episodes' representing something the story, had it been delivered straighter, would've obscured -- electrically-charged variations on a theme no less long-running, urgent, and permanently disconcerting than the place human beings, as individuals and as groups/tribes/societies, want, have, or can't have amid the nature that we romanticize and admire even as it signals its indifference to all our attempts to somehow return to it from our artificial comforts. There's no trail of crumbs left for us to feel we know or understand this film's characters or its story with any satisfying certainty, but the through-line that surges right through every successive sequence is there, recurrent, cumulative, and magnificent: It's an unfolding pattern -- a tense, uneasy, visceral, kaleidoscopic comparison/contrast of neurotic homo sapiens to the maelstrom of the physical world we can't seem to live either with or without. If you let the film work its strange magic on you, it overwhelms and invigorates; it's a work of art that has the power not merely to cater to but to alter our perceptions, denying us one kind of fulfillment and pleasure in order to awaken and slake an even deeper, even more essential thirst. Highly Recommended.