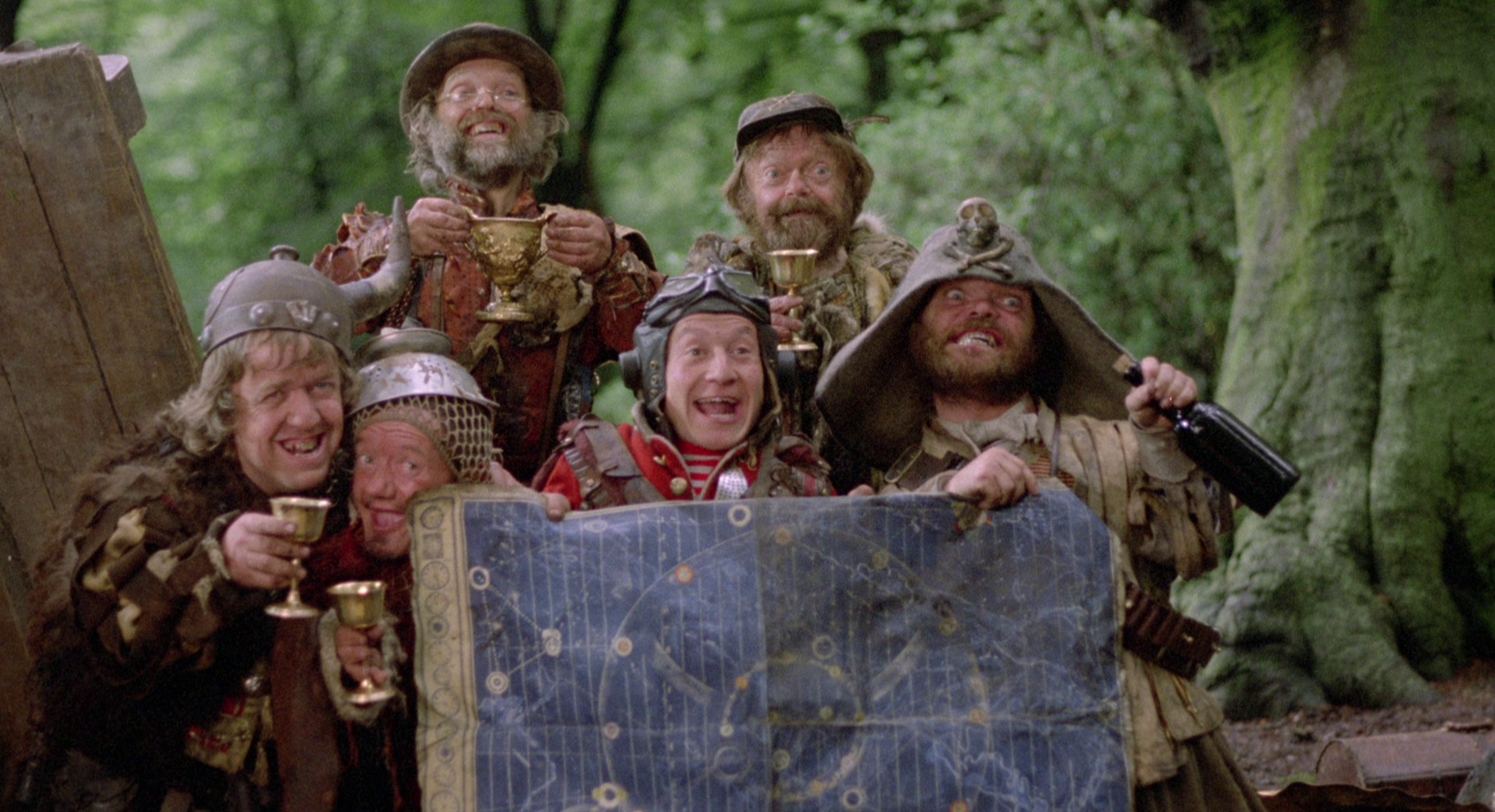 Kevin (Craig Warnock) is a bit of a dreamer. While his parents zone out every evening to terrible TV game shows and think about kitchen appliances, he stays up late reading history books and legends. He pictures a knight on horseback bursting from his closet and riding off into a grassy field where his wall used to be, only to turn the light on and discover he's still at home. The following night, six little people tumble out of his closet, but this time they're real: Randall (David Rappaport), Fidgit (Kenny Baker), Strutter (Malcolm Dixon), Wally (Jack Purvis), Vermin (Tiny Ross), and Og (Mike Edmonds) are wannabe thieves, traveling through time with the help of a special map, and Kevin has just become the newest member of their party.

Co-scripted by "Monty Python" players Terry Gilliam and Michael Palin, Time Bandits is a flawed but frequently wonderful romp through time and space. The core cast of little people embrace the chance to show off their acting skills beyond the bit parts and creature roles such actors are usually saddled with, and they're joined by a crowd of A-listers. Despite only being Gilliam's second solo feature directing gig after Jabberwocky, the film is a masterpiece of visual imagination that reflects his artistic sensibilities in every frame, and it's filled with witty, silly comedy.

Before Time Bandits was made, Gilliam was already busy trying to make Brazil, a film with caustic black humor, a detailed and specific universe, and a fairly complex story. In some ways, Time Bandits might have been purposefully designed as the polar opposite: this is little more than a romp from place to place, which starts for almost no reason and offers very little (if anything) in the way of legitimate conflict. On one hand, this is the film's primary weakness: at just short of two hours, Time Bandits frequently feels aimless, stopping and starting randomly for elaborate sequences and extended visual gags. On the other hand, this simple structure is also what allows Gilliam's imagination to run wild.

Each time period Kevin and the Time Bandits drop into is drastically different. First, they visit the dark streets of Italy, where Napoleon (Ian Holm) is taking a break from the war to enjoy a puppet show that doesn't set off his height complex. It's gloomy and seemingly lit by fires set throughout the city. Next, they tumble backward into the time of Robin Hood (John Cleese), with lush green forests. Kevin takes a detour to the golden, sandy Moroccan desert, where he is prepared to become the adopted son of King Agamemnon (Sean Connery) before the Bandits rescue him. The gang then briefly stops on the deck of the Titanic before plunging into The Time of Legends, a fantasy universe filled with pirate ships captained by ogres, giants that rise out of the sea, and mysterious invisible walls. The Time of Legends features a strong sense of the surreal, with cages that hang over an endless black void, and a castle made out of giant stone Lego blocks. Gilliam is careful to design every universe completely differently, from color to style, making his low-budget fantasy feel like a full-fledged epic. 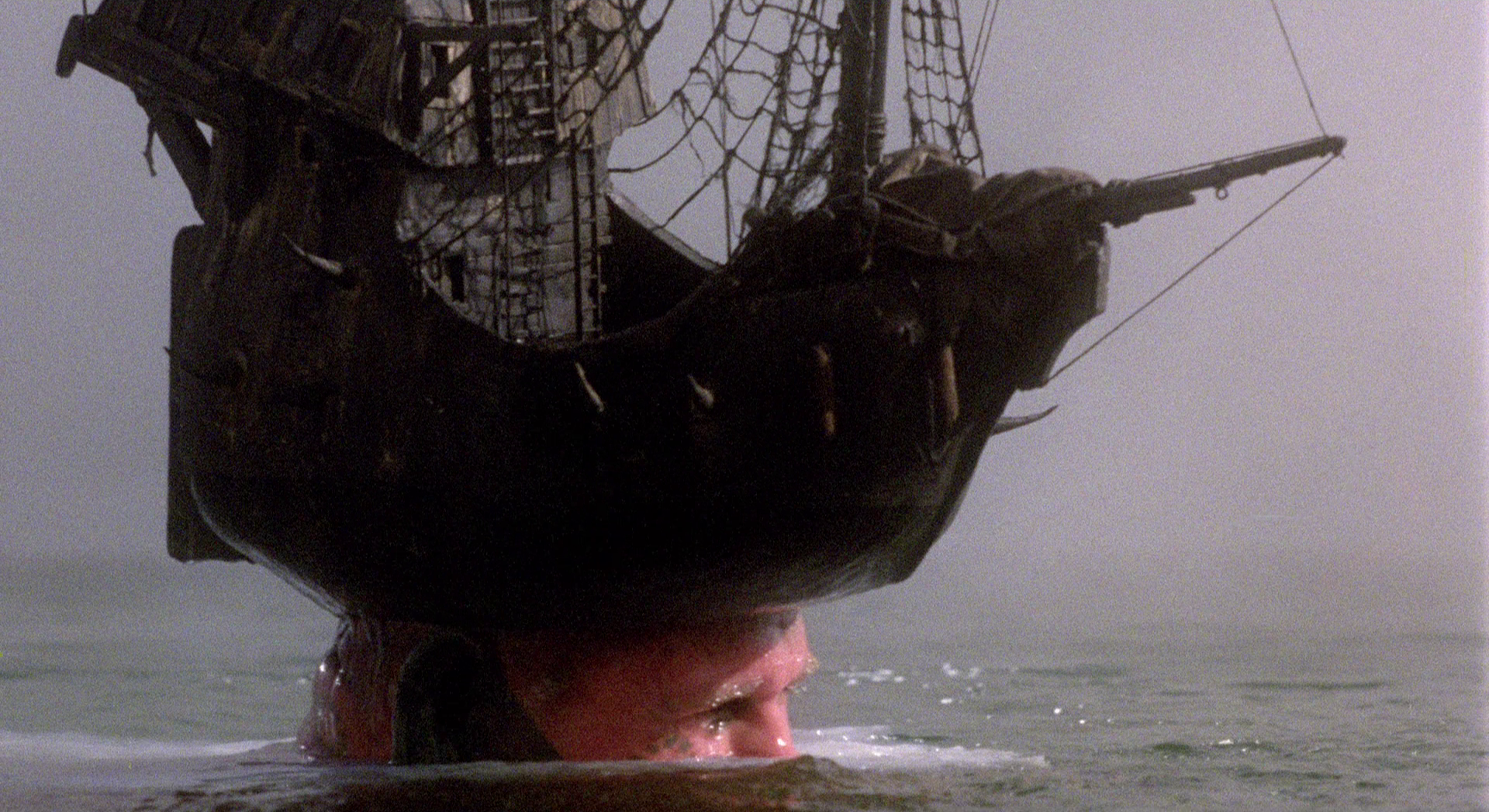 As good as they are, visuals can't sustain a movie on their own, and given the flimsy story, Gilliam's secret weapon is his casting, which is excellent across the board. Each of the Time Bandits, especially top-billed Rappaport and Baker, have their own personality and style, and their slapstick interactions are pulled off with the skill of Chaplin, Keaton, or The Three Stooges. Although his pursuit is quite lazy, there's also the villain, "Evil Genius" (David Warner), who is deeply irritated by the Supreme Being's ideas for the Universe ("43 species of parrots! Nipples for men! ...If I were creating the world, I wouldn't mess about with butterflies and daffodils! I would've started with lasers, 8 o'clock, Day One!"). Warner's haughty comic timing is perfect. Connery's role is brief and a bit odd, but he's charming in the time he has. In some ways, Kevin's story is a little lost among the shenanigans outside of the Morocco sequence, and the ending is somewhat baffling, but the camaraderie of this band of misfits through Gilliam's imagination is more than enough to make Time Bandits a minor classic.

The Blu-Ray
DVDTalk received a check disc in a plastic case with no cover art. Photos online show a wonderful illustration of a broken hourglass with footprints leading in and out, as well as a Steelbook variant with the classic boat artwork that has graced every US DVD and Blu-Ray edition, from the Criterion DVD forward.

The Video and Audio
Note: Although this is a check disc, the content on the disc itself appears to be final. I will not award star ratings as there is the minimal possibility this disc is not identical to final copy, but I will provide a write-up.

I really don't have a single complaint about this brand new 1.85:1 1080p AVC presentation of Time Bandits, struck from a 2K master and approved by Terry Gilliam. This is a gorgeously film-like transfer that trumps even Criterion's edition of Brazil in terms of fine detail, grain reproduction, and color saturation, and that film is four years younger than this one. The film constantly offers the clarity and dimension of a 21st century movie shot on film -- fans of the film should be very, very pleased.

Two audio tracks are included: a DTS-HD Master Audio 5.1 remix and an LPCM 2.0 stereo track. I flipped back and forth during the film and the 5.1 remix is surprisingly robust and energetic. Although there will always be limitations in creating a full surround sound mix out of a stereo track, the music really soars on this new mix, and action sequences are immersive and exciting. 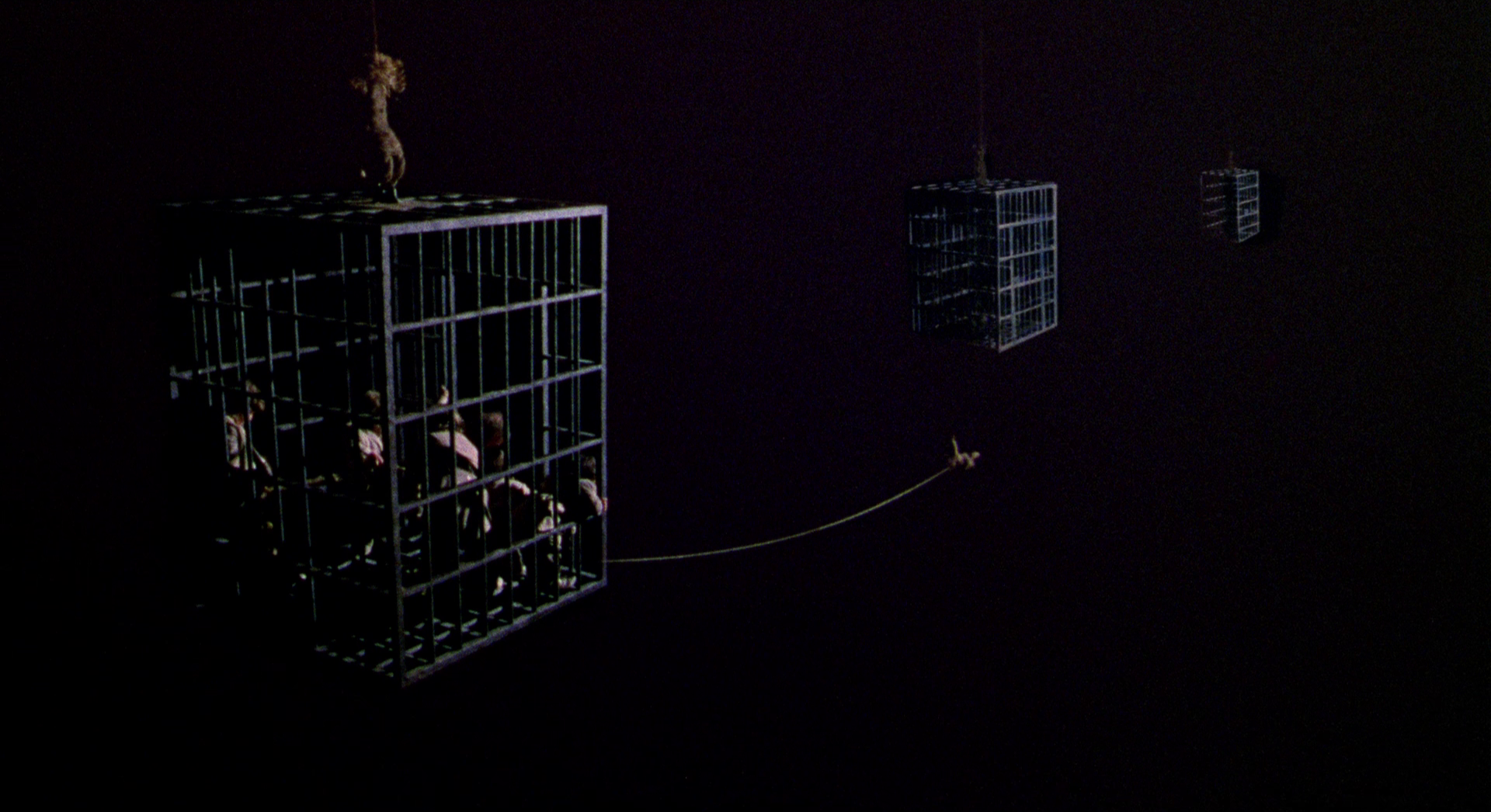 Dialogue is clean and easy to understand, even though there's a hint of age to the elements. The 2.0 track is also very good, but is noticeably flatter than the new mix. Luckily, there's no need to choose. Purists have the original mix, and the 5.1 is also on board for the viewer's enjoyment. English captions for the deaf and hard of hearing are also included.

The Extras
To go along with the brand new transfer, Arrow has conducted a number of new interviews for this edition. However, the minimal film-specific extras on previous editions have not been ported; fans will have to hang onto their Criterion DVDs for the audio commentary, and the Anchor Bay 2-disc for the half-hour Gilliam / Palin interview (the only other extra on that set is an episode of "The Directors" that is available separately). All of the extras on this new edition are in HD.

A trio of interviews focus on three of the big names involved with the movie. First, of course, is "Chasing Time Bandits: An Interview With Terry Gilliam" (20:07), which chronicles his whole process from beginning to end, from the genesis of the project, working with Palin, casting the film, staffing up for production, and finally the release and legacy of the movie. Thanks to the chronological nature of the interview, not only is this an entertaining chat with the director, but it also serves the same function as a comprehensive "making of" featurette. Next, "Writing the Film That Dares Not Speak Its Name: Michael Palin on Writing Time Bandits" (16:05) chats up the Python everyman about his role as co-writer and co-star. Palin's friendship with Gilliam is quite warm and his memories of their collaborations is quite warm and endearing. He hops back and forth between memories of writing and acting on the project, as well as touching on the film's surprising success in America, and the film's unusually dark ending. "Playing Evil: David Warner" (8:43) is a charming little chat with the actor about his happiness to work with one or two Pythons, the challenge of the costume, working with Terry, and a marvelous gift from producer George Harrison.

Four further features focus more on the crew who helped craft the film's visuals. "The Costumes of Time Bandits: An Interview With David Acheson" (13:21) goes into his process designing the look of the Time Bandits, working with the actors to make sure the costumes reflected each character individually, costuming for each time period, and finally dressing the Evil Genius. He also tells a charming story about stress, as Time Bandits was his first movie, and another about Gilliam's very special wrap gift. "The Effects of Time Bandits: An Interview With Kent Houston" (15:28) is focuses more on Houston's lengthy history with Gilliam and the camera technology used on Python animation that eventually helped make Time Bandits. Of all the extras, this is the most technical, focusing more on the tools and techniques used than sentimental memories of the shoot. He also talks about Terry's working style ("figure it out!") and goes onto talk about the state of effects films today. "The Look of Time Bandits: An Interview With Milly Burns" (10:43) sits down with the production designer to talk about how she first came to work with Gilliam and her memories of working on Time Bandits. Burns is very charming and has numerous amusing Gilliam stories, including his attempts to pay more for Moroccan rugs. 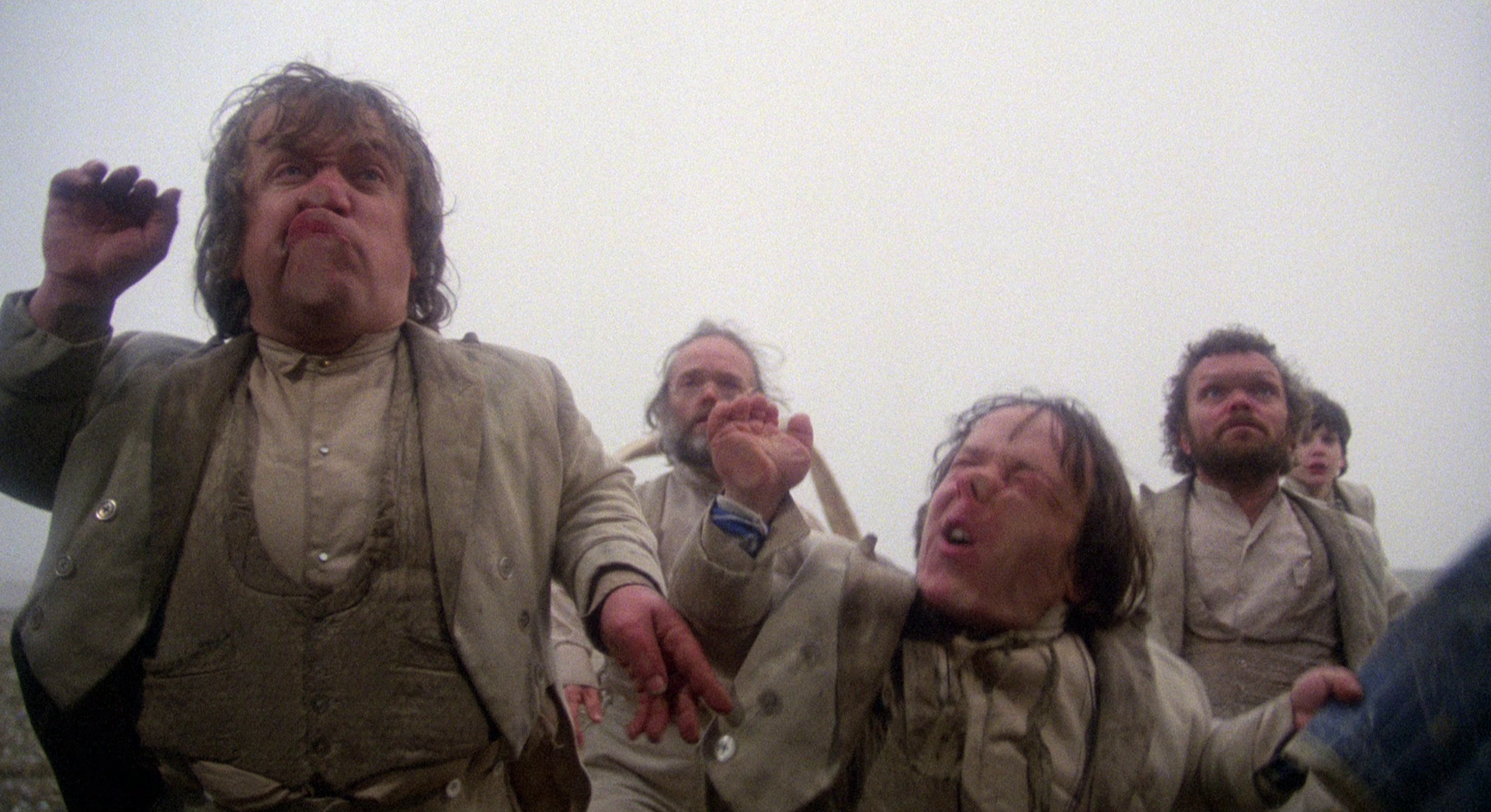 "From Script to Screen" (8:33) also features Burns' voice, laid over a series of script pages, production photographs, and Gilliam's storyboards. The title of this clip is fairly generic, but this specifically details the process of preparing everything needed to get the script on screen -- how many locations, what will need to be built, who will need to be hired, etc. A bit dry, but very informative for those wondering how to break down a screenplay for shooting.

"Restoring Time Bandits" (2:43) wraps up the disc with a quick look at the restoration and new transfer, showing some of the usual "before-and-after" footage while explaining the process of updating the freshly-scanned negative through scratch and dirt removal, stabilization, and color timing.

Conclusion
Although this disc is locked to Region B and will require a region-free player for Americans to enjoy, this is hands-down the definitive edition of Time Bandits. Although the movie takes a bit of a kitchen sink approach to adventure, the cast and Gilliam's stylish universe should still prove to be great fun for audiences, especially with a wonderful new transfer that makes it hard to believe the movie's approaching its 35th anniversary, and a slew of entertaining extra features. Highly recommended.