Scorpion Releasing // R // November 6, 2012 // Region 0
List Price: $24.95 [Buy now and save at Amazon]
Review by Stuart Galbraith IV | posted September 25, 2013 | E-mail the Author
My pal and colleague Steve Ryfle produced the special features for Georgia, Georgia (1972) a criminally and unjustly forgotten African-American drama written by Maya Angelou though filmed, oddly enough, in Stockholm and directed by a Swede, Stig Björkman. The film was barely noticed by contemporary critics, while on DVD its distributor, Scorpion Releasing, has surprisingly made little effort to promote it as the special release that it is. Ryfle himself eventually took to pushing the film on his own, going so far as to send DVD Talk his own, personal copy of the DVD, which sat for several days in our screener pile unnoticed and unloved.

But Georgia, Georgia deserves, cries out even, to be more widely seen. It's a unique, historically important, and more to the point terrifically good film. I expected a better-than-average Blaxploitation effort, more literate and serious perhaps, but also something crudely made and possibly dramatically clunky and exploitative. Instead, the film is none of those things. It's quite polished if low budget, though the Stockholm locations help hide this. Angelou's sharp-tongued screenplay is very ambitious, covering a wide range of topics and characterizations, yet in almost every respect she and the film's cast and crew pull all of them off. It's a revelation, truly.

Scorpion's DVD offers a good transfer of dicey film elements. The picture was shot in Super-16(mm) and blown-up to 35mm by original distributor Cinerama Releasing Corp., surely making this the grainiest movie ever to grace colossal Cinerama screens. The DVD sources a 35mm print. Björkman and co-star Dirk Benedict (he of Battlestar Galactica fame) join Ryfle for an enlightening audio commentary, and there are other valuable extra features also. 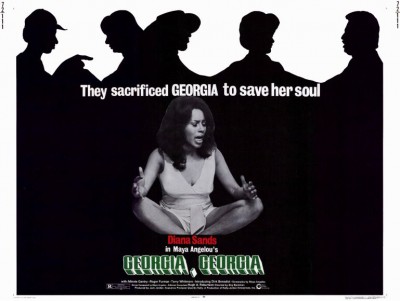 The movie opens with a very authentic, semi-documentary styled press conference, with reporters asking black diva Georgia Martin (Diana Sands) one inane question after another. (The Swedish setting reminded me of the similarly inane press conference that opens Lasse Hallström's ABBA: The Movie, in which Agnetha Fältskog is repeatedly asked about her sexy butt.) Georgia particularly resents questions that insist on positioning her as some kind of African-American symbol. "How do you feel about the Black Power movement?" one reporter asks. En route to her hotel with gay manager Herbert Thompson (Roger Furman) and surrogate mother traveling companion, widow Alberta Anderson (Minnie Gentry), she mocks their superficial questions, responding to a one inquiring about her "connection with Africa" with, "Sure! I've seen every Tarzan movie they ever made!"

Safe in her hotel suite, Georgia sheds the famous entertainer (straight-haired wig, heavy makeup) to become Georgia the frustrated, lost soul, reflecting the dual nature of her character as reflected in the movie's title. In a ritual repeated several times during the film, Mrs. Anderson soothes Georgia by combing her hair while singing the gospel standard "This Little Light of Mine," Georgia sitting on the floor like a child between the seated older woman's legs.

Two more characters are introduced. One is a based-in-Stockholm white American magazine photographer, Michael Winters (Dirk Benedict), the other a black Vietnam War deserter, Bobo (Terry Whitmore, a genuine deserter living in Sweden). Bobo all but demands Georgia use her celebrity influence to help other black deserters stranded in Sweden, and in an unnerving early scene he works his way through Georgia's hotel, yelling and loudly banging on every door, hoping to find her.

Bobo changes his tune when he realizes his best "in" to Georgia is through her white-hating companion, Mrs. Anderson, whose understandable racism (her husband was castrated in a lynching) is so virulent she refuses to patronize even Swedish white-owned restaurants "unless absolutely necessary." Bobo adopts an approach that's like a black Eddie Haskell to her Mrs. Cleaver, he presenting himself as a stateless black man with exceptionally good manners. (He calls her "Ma'am" a lot.)

Both Herbert and especially Mrs. Anderson are wary of Michael and his motives, ignoring his requests to be alone with Georgia during their photo shoot. Their relationship eventually blossoms into an interracial romance, the film's most talked-about aspect, but her relationship with the much younger Michael is less important than his interest and appreciation for the real, unmasked Georgia, and her desperate efforts toward self-realization.

Angelou's screenplay, the first feature credited solely to an African-American woman, addresses myriad topics: racial identity, celebrity, homosexuality, Vietnam War deserters, expatriate issues, repressed rage, miscegenation, and racism, among others. Georgia is angry and overwhelmed by the demands of her profession, by being gawked at and viewed by many as a symbol she wants no part of. She's confident and cutting as Georgia the entertainer, fast on her feet with cynical retorts at that press conference, but totally lost and lonely with the wig off, in one scene gazing at her naked, deglamorized face in a mirror late into the night. Mrs. Anderson (with Gentry giving an ultimately very disturbing performance) tries to instill in her emphatically black traditional values Georgia has seemingly forsaken, but Georgia herself finds Alberta as much a needling presence as she is soothing. Broadway star Sands, 37 years old at the time and dead soon after Georgia, Georgia's release, delivers a real soul-baring, Oscar-worthy performance.

Both Sands and the film are vastly superior to similar but much higher profile Lady Sings the Blues, the Diana Ross-starring Billie Holiday biopic released that same year. Georgia effuses a Ross-style glamour but her act, what the movie audience gets to see of it, is more like a cross between Eartha Kitt and Shirley Bassey, the one number she sings even having a James Bond Theme riff.

Dirk Benedict's cocky, cigar-chomping heroes on Battlestar Galactica and The A-Team regrettably typed and suppressed an actor capable of much more interesting and credible characters. Benedict's gentle, nonjudgmental, uncertain Michael is a remarkable little performance, more like the sensitive teenagers and young men Jeff Bridges (who was also considered), Richard Thomas, and Bruce Davison played early in their careers.

Intriguingly, after the film's completion the producers wisely chose to deemphasize the interracial romance (according to Ryfle, in favor of the expanding Bobo's role in the story, though it's still subservient to Georgia's struggle with personal identity, or racial identity as Mrs. Anderson would have it). Maya Angelou more or less disowned the film, blaming Björkman for what she perceived as a negative portrayal of black women. Ryfle argues she's "dead wrong" and I concur. Michael is only vaguely defined and exists mainly to spur Georgia to look deeper inward. She's sympathetic and intriguing, while Mrs. Anderson is a controlling, universally recognizable character, and together they're the best things about the film. Despite its white director and co-star, Georgia, Georgia is resolutely a black film told from an African-American perspective.

Georgia, Georgia, in 1.78:1 enhanced widescreen, gets a good transfer of weak elements, specifically a 35mm blow-up print from a Super-16 negative. The image is grainy and unattractive, though probably pretty accurate to what it looked like theatrically, when it was new. (Based on what the British are achieving with high-def transfers of 16mm television shows, Georgia, Georgia could look far better, if there was ever any interest in and funding to restoring it.) Nevertheless, the image is entirely serviceable as is the mono sound, English only with no subtitle options. The disc is also region-free.

Supplements include an audio commentary featuring Björkman and Benedict, moderated by Ryfle, whose forthcoming book on African-American cinema I'm really looking forward to. The commentary is crammed with insight on this unique production, its struggles, ambitions and achievements. Björkman and Benedict are justly proud. Also included are invaluable liner notes by Ryfle, an original trailer, and a slide shows of personal photos provided by Benedict.

One of the great finds of the year, Georgia, Georgia is ripe for rediscovery and a DVD Talk Collector Series title.