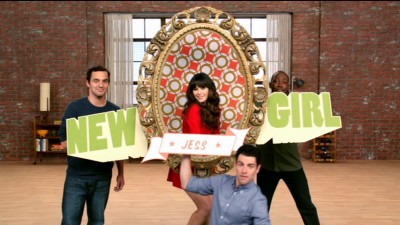 
The Story So Far...
Schoolteacher Jess Day (Zooey Deschannel) had just gotten out of a bad relationship when she found herself filling a vacancy in a loft with three male roommates, lazy Nick (Jake Johnson), egomaniacal Schmidt (Max Greenfield) and self-conscious Winston (Lamorne Morris). The quartet became fast friends, while Schmidt quickly became obsessed with Jess' model best-friend CeCe (Hannah Simone.) The chronicling of their romantic mishaps has entered its third season, while the first season of the show was released in October of 2012. DVDTalk has a review of that set.

The Show
The first season of New Girl established the will-they-won't-they pairing of Nick and Jess and the they-did-will-it-last coupling of Schmidt and CeCe, so the second season is all about raising the stakes for them. For Nick and Jess this takes the form of bad relationships keeping their minds off messing with the loft dynamic by dating a roommate. Though each has some legitimate opportunities for happiness, be it Jess' commitment-phobic Dr. Sam or Nick's sexually adventurous stripper girlfriend (played by Olivia Munn.) However knowing that there remains a chance they could end up together leads to frequent self-sabotage.As much as Deschannel is the star of the show, Johnson has quietly become just as integral, as Nick grows and discovers himself, with the help of his future self and a water-massaging elderly Asian gentleman (the show can get weird sometimes.)

For Schmidt and CeCe, reality is far less promising, as CeCe begins to sense her biological clock is ticking, and finds herself on a course for an arranged marriage to a pleasant man who just isn't Schmidt. Meanwhile, the one true Schmidt seeks to alleviate the impending loss of his caramel queen by running back to his one true love, Elizabeth, a girl he dated in college, when he was hundreds of pounds heavier. It sets up a troubling love triangle, as the real Schmidt is just right for Elizabeth, but the Schmidt he wants to be is a perfect match for CeCe. While there's a grimy aspect to Schmidt keeping two women secret from each other, on the other hand, Greenfield makes it work by showing Schmidt cares about both women and is, oddly, doing it to not hurt either of them, rather than out of some sort of romantic greed. It's an unusual situation, and one the show handles well. 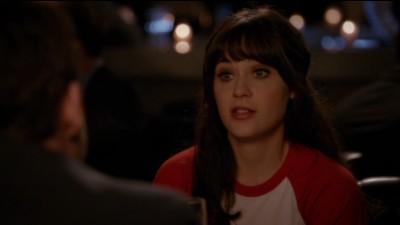 The focus on Schmidt and CeCe this season unleashes the show's secret weapon, as Simone proves to be one of the most consistently funny performers in the series, popping in a look or a delivery that's just perfect for the situation. Many of the show's best moments this season grow out of CeCe's on and off again connection with Schmidt, with the season's home-stretch existing only thanks to the culture clash that grows from her arranged marriage, Part of what makes her so entertaining is how her exotic beauty gets betrayed to hilarious effect by her ability to be wonderfully silly. (The other benefit of having CeCe around is the presence of her Russian modeling pal Nadia (Rebecca Reid), who is economically hysterical, with a higher laugh to word ratio than anyone on TV.)

The mix in the loft is why the show works so well, as the quartet of roomies and friends behaves realistically, no matter how offbeat the situation may be or how odd the four may sometimes get. So whether it's Schmidt feeling old thanks to some hipsters who have imoved in and befriended Jess, the exploration of the group's most annoying aspects (a.k.a. "pogos") or Winston struggling with his period, they mercilessly tease each other, but have each other's back to the end. This is never more clearly illustrated than in "Virgins," where the crew one-up each other with their horrible tales of their first sexual experiences. The way they interact is as close to real friends as anything on TV.

With the series expanding upon the world created in the first season, we get to meet more of the people in the lives of the four roommates, and those additions were rather impressive, to go with returning speicial guests, like June Diane Raphael (playing Jess' lesbian gynocologist.) The late Dennis Farina had a great turn as Nick's con-man father, while Margot Martindale plays his brassy mom, Nick Kroll is his dim-witted brother and Bill Burr is his Beantown cousin. Meanwhile on Jess' side, they snagged Rob Reiner and Jamie Lee Curtis to play her feuding parents (and Reiner should become a series regular as her dad). Add in Rob Riggle as Schmidt's brother, Carla Gugino as his sexually-aggressive boss and Brenda Song as Winston's new lady friend, and the show managed to cultivate a fine ensemble outside of the core five, expanding and improving the series. 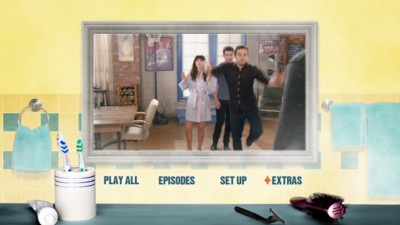 The Discs
The 24 episodes of New Girl's second season arrive on three DVDs, packed in a clear single-width keepcase with a dual-hub tray, a two-sided cover that lists the episodes and special features. The discs have animated anamorphic widescreen menus with options to play all the episodes, select shows, adjust languages and check out the extras. Audio options include English and Spanish Dolby Digital 5.1, while subtitles are available in English SDH, Spanish and French.

The Quality
Like last season. the anamorphic widescreen transfers are excellent across the board, with solid color and good detail. Black levels are sufficiently high throughout and are no obvious issues with compression artifacts. After watching this show in HD in its over-the-air broadcasts though, the difference is blatant.

The Dolby Digital 5.1 soundtracks are just as good as they were last time around, with the dialogue sitting in the center channel, with the surrounds giving the music a boost, along with some atmospheric sound effects. There's nothing dynamic about the mix, but that's just the kind of show it is.

The Extras
After getting three commentaries last time, we're down to just one track this time, with creator Elizabeth Meriwether, producers Brett Baer, David Finkel sitting down to discuss "Cooler" (none of the actors are involved this time.) It's a very details-oriented track, and includes notes about things that were cut from the show,

An extended version of "Virgins" is available to watch, but with only about two minutes added to the episode, the differences are few; mainly a few lines here and there. The deleted scenes (eight scenes, running 6:43) are much more entertaining, especially the hilarious riff-off between Daisy and Winston. If you're looking for more excised elements, the 6:43 gag reel, which should be funnier, but features plenty of tied tongues and an unusually high amount of slapping.

The final extra is "Full of Schmidt," a best-of reel of choices lines from the show's memorable ladies' man. If you like the show, these are probably already burned into your brain though. 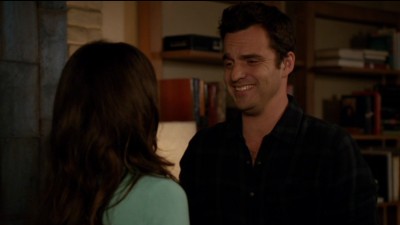 The Bottom Line
The natural progression of the relationships between Nick and Jess and Schmidt and CeCe, along with the changes in the world around them, made for an entertaining season that balanced silly fun with genuine emotion. The DVDs look and sound good, though the extras are diminished from the previous season. Either way, this is a great season, one that holds up to multiple viewings very well.