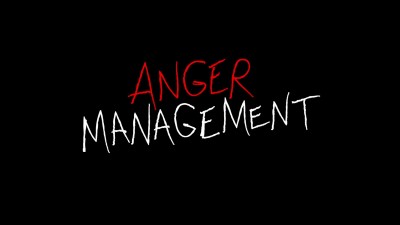 The front cover's tagline is "He's feeling renewed." Actually, "Anger Management" already had a deal from the get-go to have about 100 episodes produced, so that feeling isn't such a big deal. Anyways, Charlie Sheen's sitcom has had its second season released on Blu-Ray. A brief note at the end of each episode states that it is based on the movie of the same name, but does not show any resemblance. Sheen plays a character also creatively named Charlie who was once a major-league baseball player but had to leave due to his anger issues. Subsequently he becomes a licensed therapist and begins holding group therapy sessions in his living room for others with anger issues (the primary basis for the show) as well as another group therapy at a nearby prison. Although divorced, he remains on rather good terms with his ex-wife Jennifer (Shawnee Smith) mainly for the sake of their daughter Sam (Daniela Bobadilla), who is said to have OCD (Obsessive-Compulsory Disorder). Selma Blair plays Kate, Charlie's friend from his time at psychology school with whom he has a rather questionably relationship with ethics-wise, as she serves as his own therapist and also has no-strings-attached sex with him. In this season it's made clear that Charlie actually wants a more meaningful relationship with Kate but she's too afraid of the whole commitment thing- the reverse of most onscreen male-female relationships.

Charlie's real-life father Martin Sheen, who appeared in one episode previously, becomes a recurring character in this season as the character Charlie's father, also creatively named Martin. He lives at an old folks' home but comes over to visit Charlie quite frequently- in fact, early on he fakes being senile (including putting his shoe in the fridge and mistaking the pantry for the bathroom) in order to get Charlie to take him in permanently but that doesn't work out. Martin wants to play a bigger role his granddaughter Sam's life and she seems to like him most of the time. Charlie and Martin also bring up how their earlier relationship was a bit dysfunctional (apparently leading to their not speaking to each other for a few years) and are now attempting to patch things up. 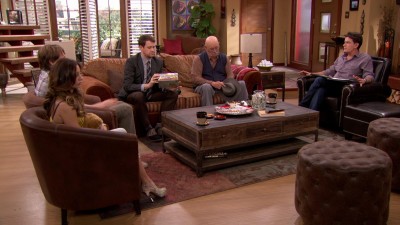 I wasn't too kind to Anger Management's first season released earlier this year, but still felt the show had some potential. People's emotional problems can make for funny material, whether done in a sympathetic or mean-spirited manner just as long as it's actually funny. I felt the previous season didn't focus on that subject enough and many of the episodes were about trivial matters- this season does a little better though that's not really saying a lot. My main problem with Charlie's character not seeming much like a professional therapist still stands, as he is rather grouchy and gives off the vibe as he did last season that his life is just one big ordeal. He does seem to express a bit more concern and sympathy for his patients this time around however.

One episode which in real life might have caused Charlie to lose his therapist's license is admittedly pretty funny, where his oldest patient Ed (Barry Corbin) is so wound up about having to attend a get-together with a family member he hates that Charlie puts him on an experimental medication to help keep him sane. He gets the rest of the group to take the medication too, but lets them know it's really just a sugar pill and he's trying to see if it can still help Ed psychologically. Charlie still gets plenty of chances to show his womanizing qualities however, as he meets a former patient and makes plans to score with her right when the legal 5-year limit for fraternizing with patients expires. The funny thing about that episode is that most of his colleagues, including one female, have the same idea. Another episode has Charlie visiting his daughter's teacher and ends up in an affair with her, then believes his "performance" is being reflected in the grades she gives her daughter.

A dynamic between two rather different patients is explored in several episodes- Nolan (Derek Richardson), a rather awkward fellow, is attracted to Lacey (Noureen DeWulf), a spoiled snobbish woman who usually declines his advances but this season lets him get a little closer. Lacey still has ulterior motives for most of her kindness however. Although she's one of the least likeable characters in the group, her backstory is one of the clearest with her being required to attend the group because of having public tantrums whenever she doesn't get her way.

Cee-Lo Green appears in one episode as himself, in a rather silly plot where he hires Charlie to fire his assistants for him as he doesn't have the guts to do so. Lindsay Lohan appears as herself in another, where she hires Charlie to help her behave herself during a shoot for a Japanese TV commercial. This episode takes a number of shots at Lohan's real-life problems but she seems to be a good sport about it, and in the episode she gets into some more trouble as cameras follow her everywhere but most of it is a big misunderstanding. 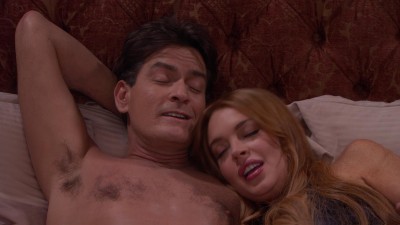 Charlie Sheen's real-life ex-wise Denise Richards appeared in one episode in the previous season as an ex-girlfriend, and returns in this one for one more. This time around Charlie finds out that she's a lot more fun when she's angry.

One smaller guest appearance I enjoyed was Bob Einstein of the 1980s Showtime series "Bizarre" who also brought his "Super Dave Osborne" character from that show into a spin-off series and movie. Here he plays a neighbor who tries to get Charlie's group moved out of the neighborhood after Lacey does some damage while parking near his house. Carol Kane also appears as a surprising love interest for Nolan. "Slash" of Guns N' Roses fame makes a brief cameo in another episode as a neighbor of group member Patrick.

Charlie's daughter Sam is still underutilized in this season but gets a bit more attention than she did previously. She's mostly featured at the same time as grandfather Martin, such as one episode where he tries to get her into religion despite the parents' being agnostic. Her OCD, which I felt could have made for some good humor, really only gets showcased once when she vacuums excessively. Given Martin Sheen's prior work it's rather embarrassing to see him in something like this, where his age makes him the butt of most jokes. I'm sure many here will enjoy the joke of him receiving a "bargain-bin DVD" of Grumpy Old Men for his birthday however. As in the previous season, the scenes where Charlie visits the prison are the most groan-inducing with most of the humor centered around the common subject of prisoners having sex with each other.

I noticed that this season had some establishing shots of the outside of Charlie's house, but the house they chose doesn't look like a good match for the inside. Other sitcom conventions here made me wonder how many houses actually have a free-swinging door to the kitchen, and how many visitors show up to a house through a back door leading into the kitchen rather than the front? 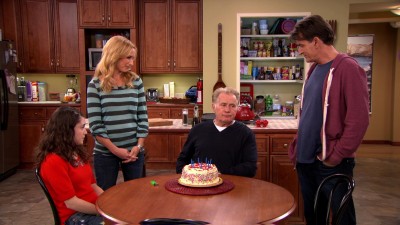 One thing to be said of "Anger Management" is that it looks very nice on Blu-Ray. It appears to have been shot with digital equipment that mimics the look of film, and details shine through in every shot- I made out the street address of Kate's office in one scene, which I would have tried mailing something to if I had more free time. Studio lights are often reflected in shiny objects onscreen such as cups, and a couple times you can even see a moth flying around the set- another case of perhaps too much detail! Whatever your opinion of the show's material you'll have to admit this is a great picture. 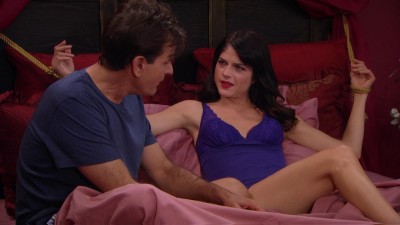 The audio is technically competent, but given that it uses a 5.1 mix (in DTS-HD Master Audio on the Blu-Ray) it really doesn't take advantage of it. Most of the sound stays in the center channel, though I caught a bit of ambient sound in the rears in a couple scenes- this was putting my ears up to the speakers however, under normal conditions the surrounds really don't make themselves known except for some of the music in between scenes. Audience laughter was recorded in a screening room of people watching the episode rather than actually at the set, and is heard mostly in the front left and right channels and usually sounds as forced as most sitcom laugh tracks. (I've always found laugh tracks rather annoying and wished that disc releases of sitcoms that didn't actually have a live audience would include a second audio track without the added laughter, but no dice here.)

Both SDH and standard-format English subtitles are included as well as Spanish. 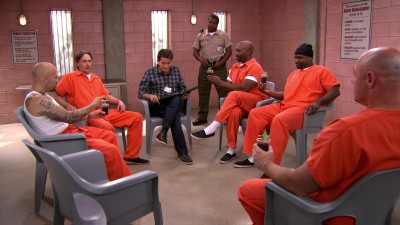 The only extra related to the show is a 10-minute "gag reel" (in HD) of actors flubbing their lines. For the most part it looks like they're having fun, and the aforementioned fly or moth gets mention here too. Other than that, you get a DTS 5.1 Sound Check which Lionsgate puts on most of their discs, and a DTS trailer before the first episode which is a bit overkill for what follows. Disc 1 opens with a "Look for it on Blu-Ray and DVD" trailer for A Glimpse Inside the Mind of Charles Swan III which also stars Charlie Sheen, and promos for Nurse Jackie Season 4, Duck Dynasty Season 3, a general promo for other Lionsgate TV series and a promo for the Epix movie channel. 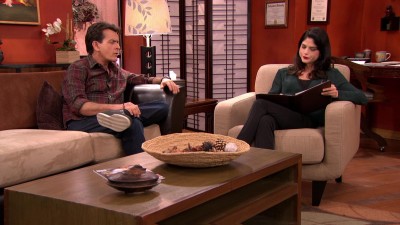 I felt this season of "Anger Management" was a slight improvement over its rather lackluster first, but still didn't live up to its subject's full potential. Although I laughed a few times, most of the humor still seemed rather forced. Being made for a cable channel, this certainly isn't the sort of thing I'd willingly subscribe to that for as it's mostly on par with standard-TV fare. Assuming the contract for many future episodes still stands, "Anger Management" still has a chance to improve so again we'll just have to see what happens. At any rate, it looks much better than it deserves to on Blu-Ray, and of course you can enjoy it here with no screen clutter or commercial interruptions, which judging from the running time saves you about eight minutes of commercial time per episode which might have forced you to assess your own anger management skills.