Hollow Crown: The Complete Series, The


One of the first assignments I tackled when I began writing for this site, a few years back was the BBC's "An Age of Kings," a legendary miniseries production from the 1960s that adapted, "Richard II," "Henry IV, Parts I and II," "Henry V," Henry VI, Parts I, II and III," and last but certainly not least in the Bard's legendary repertoire, "Richard III." The production was very much a product of its time, which by and large was a huge feather in its cap, as the cast gathered were masters of their craft and perfect choices to see Shakespeare brought to the small screen for the masses; from a historical perspective, there were also a lot of now legendary faces (Sean Connery and Judi Dench to name two) amongst the cast. The production was very much the definition of ambition and a quality piece of craftsmanship through and through. Not to let sleeping dogs lie though, with the backing of Sam Mendes as producer as well as the finances of NBCUniversal to name one source, the BBC offered viewers in 2012 another chance to experience second Henriad in the form of "The Hollow Crown" an exquisitely produced adaptation backed by some incredibly standout performances.

Rarely adapted, apart from most notably, the "An Age of Kings" production, "Richard II" is the most tonally radical entry in "The Hollow Crown." The story is a classic duality between the tragic downfall of the obviously mentally unbalanced Richard II (Ben Whishaw) and the reluctant rise of Henry Bolingbroke (Rory Kinnear, in a stoic solid performance), to save a crumbling nation and to right a wrong brought against his name. While I have never read the original source material, this production edges out the "An Age of Kings" production in runtime by a good twenty minutes, although there are areas in the latter part of the first act and well into the second act, that the narrative feels disjointed and rushed. Most notably the two lead female characters feel like afterthoughts, generally blending into the background or serving as transitions to the meatier action. Richard II's wives are blended into one nameless character, while the Duchess of York meets the same fate. 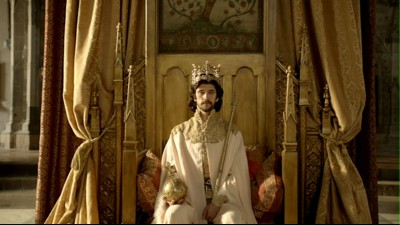 Rupert Goold's direction stays focused on Bolingbroke and Richard II to great effect though, with Whishaw's calm and almost ethereal performance providing chills and a sense of unease, most notably in the sequence in which Bolingbroke claims the throne. We feel for both characters in a way not often present in similar tales; on one hand we can see Bolingbroke's point of view, with Richard II having disrespected him once again staking a claim on Bolingbroke's father, John of Gaunt's (Patrick Stewart in a key, memorable supporting role) estate. Yet, we are unable to shake the notion that Richard II is clearly suffering from mental illness and Whishaw's performance sells this notion without hesitation. The production itself sets a tone of quality present throughout the series and Goold ensures set pieces are both eye-catching and add to the drama, yet never become the focal point, case in point, the tragic finale of the whole affair.

As emotionally gripping and atmospheric as "Richard II" was, the shift to "Henry IV: Parts I and II" is a bit jarring, but with the high standards of production value, the viewer never feels like they've left the narrative world. Replacing Rory Kinnear, Jeremy Irons is a welcome, familiar face, but despite receiving top billing, "Henry IV" is really the tale of Hotspur (Joe Armstrong), Prince Hal (Tom Hiddleston), and of course, Falstaff (Simon Russell Beale). Part I of the production feels at times like a string of vignettes strung together to build up anticipation for the climatic Battle of Shrewsbury. We are witness to the standard political machinations regarding our titular king, while Hotspur and the rebel faction plan their strike against the king, who they feel scorned by. It's a shame that unlike in "An Age of Kings" Hotspur is nowhere to be seen, as even though his part is small, it sets the thematic seeds for dissent, key to the narrative progression here. The most engaging of these "vignettes" revolve around the essentially neer-do-well son of the king, Henry or Hal as his friends refer to him. Hiddleston's charm and charisma that served him so well as an effective foil in "Thor" and "The Avengers" works to great effect here, with the added bonus of the young actor getting the greatest character arc in the entire series. 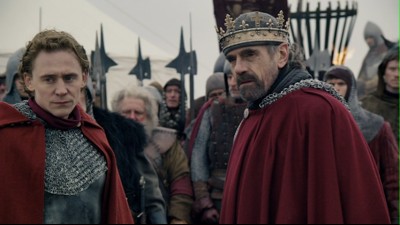 Falstaff himself plays a critical part in Hal's rise to the throne, serving as a source of comedy for he and his friends, as well as a wayward father figure. A tragic, broken, shell of a man, Falstaff, serving as a cautionary tale for Hal, who in Part II finds himself drifting down the path of ruin, nearly losing the throne in the process, leading to the punctuating mark on the second production of the series during Hal's coronation as King Henry V, in which we see Henry's character arc take a serious, but dark step forward, casting off his former wayward ways in order to keep his grip on power tight. Running over four hours, "Henry IV" is an endurance test in one chunk, so the natural break between Parts I and II gives time for reflection, before moving on, with the Battle of Shrewsbury shaking up all our major players. Truth be told, I found Part I more engaging on a whole, but key moments in Part II will stick in my mind far longer.

"The Hollow Crown" concludes with "Henry V" thankfully keeping Tom Hiddleston filling the role he magnificently started in ‘Henry IV." Of the three works represented in the series, "Henry V" is the most straightforward, although like its predecessors shares common themes, including what is at this point, a vast overreaction to an insult. Hiddleston's Henry V is a changed man from before, having grown depths since the concluding scenes of "Henry IV" taking control of matters concerning him most and proving an inspirational leader and a multifaceted man, not lacking regret and introspection. Thea Shamrock's direction keeps "Henry V" running smoothly on all cylinders and feels very distinct when compared to the big screen Kenneth Branagh production. This adaptation is its own entity, remaining true to the themes, but presenting them with a very modern feel while not sacrificing the original dialogue one iota. 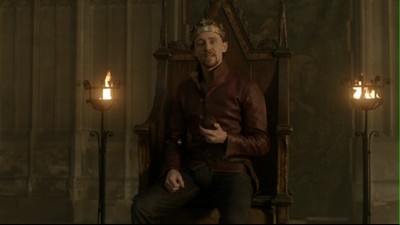 As a whole, "The Hollow Crown" is a tremendously entertaining viewing experience both for the seasoned Shakespeare fan and the cautious outsider looking for a way to get into the middle of things. The productions' manage to feel paced for a modern audience, despite the language itself being true to the source material, most likely a result of the production design being on par with a more cinematic feel than a stage production, that even the best big screen adaptations of Shakespeare have found themselves roped into. There's not a single performance I would classify as bad, even the sadly underwritten female roles in "Richard II" feel at minimum competent. The end beauty of the production is all three features can be taken in on their own merits, they only become richer watching them in order. I can honestly say I didn't feel I'd see the day when I saw something approaching the breadth of "An Age of Kings" but color me wrong, "The Hollow Crown" stands tall with the best filmed adaptations of the Bard's bibliography.


The 1.78:1 anamorphic widescreen isn't quite reference quality, with a generally detailed image that shows just a minor hint of digital tinkering to reduce grain. Colors are consistent without fail, although the color palettes themselves obviously differ from production to production as a result of artistic choices, but the contrast is never hard on the eyes.


The Dolby Digital English 5.1 audio track is of equal quality across the productions, with a rich use of surrounds during the occasional battle sequence, as well as for atmosphere in corridors of stone. Dialogue is never overpowered by either effects or score, a critical point in any production of Shakespeare and the use of the low-end channel is never overdone. English SDH subtitles are included.


The extras are more than a bit disappointing, consisting only of a making-of featurette for each adaptation on the respective discs and a featurette covering the whole program as well.

Wholly entertaining in every way, "The Hollow Crown" is on the short list for must-see releases for 2013; it is the rare adaptation of Shakespeare that bridges the gap between the learned aficionado and the curious novice. Loaded with great performances and eye catching, production design, there's not a single reason to pass it by. DVD Talk Collector Series.