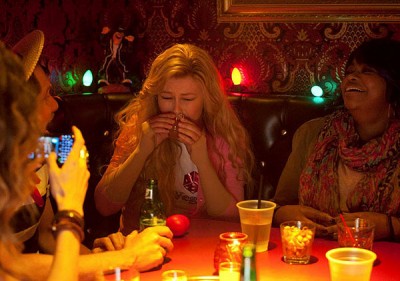 I've got a writer crush on Diablo Cody. I'll just say that up front. And not because she's a girl and I am some sweaty dullard critic working far from Hollywood. No, I have a writer crush because I think she's really damn good at what she does and she's sort of everything I wanted to be when I was a kid dreaming of being the kind of writer that makes such an impact that people actually know your name. (There you go Facebook commenter who, in response to my Rush review, opined that I'm a critic because I'm a failure. You were right!)

I say this because I'm seeing how some of my colleagues are rating Cody's directorial debut, Paradise, and I am feeling defensive and confused--not dissimilar to when Young Adult first came out and people I knew were piling on top of it (though, clearly not DVDTalk writers). I thought Young Adult was exceptional, unafraid to dig deep into some dark personalities. Granted, the main one was an overgrown child who self-identified as a writer, but still...I didn't get all the disdain. Luckily, I think Netflix has helped rescue that gem.

Paradise is nowhere near as good as Young Adult, and isn't nearly as unique as Juno, but as far as dipping her toes into the directorial waters goes, Cody's cobbled together a respectable effort. Paradise is predictable, sure, and maybe a tad undercooked, yes, but it's just so likable, how could you not?

A large part of that likability is down to the main character, Lamb, a sincerely portrayed innocent played by Dancing with the Stars-alum Julianne Hough. Lamb lived a sheltered life in the heartland until a plane crash left her with burns over most of her body. The accident took away her faith in God, but it left her stinking rich. So, Lamb grabs a wad of cash and heads to Las Vegas, looking to indulge in all the sin that she has so far been denied. All the sin, including something as seemingly innocuous as dancing. That's how much she's been shielded from the outside world. (Her parents bookend the movie, making for distinguished cameos from Holly Hunter and Nick Offerman.) 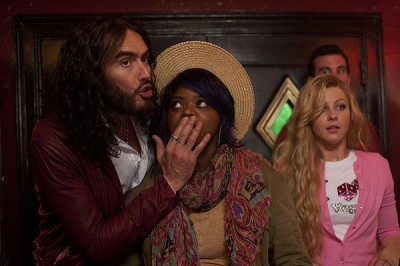 Paradise tracks Lamb over her night of cutting loose. She hooks up with an alcoholic grad student moonlighting as a saloon singer (Octavia Spencer, Smashed) and a bartending lothario (Russell Brand, Get Him to the Greek) who decide to stick with this odd girl and keep her from tumbling into the darker pits of Sin City.

You can probably guess how it's all going to go. Lamb discovers she is not so good at being bad, and her new friends remember what it was like to be kind, and though she does not completely recommit herself to the milquetoast lifestyle she left behind, Lamb finds some peace. It's a clean wrap-up, but not one that inspires eye rolls. Paradise is a mainstream movie masquerading as an indie darling.

Which may be what is causing such confusion. I am not sure any of us expected Diablo Cody to be so gentle. Both sides of Lamb's life, her strict Christian upbringing and the jaded hedonists she meets on the Strip, would have made easy targets for Cody's poison pen. That she treats both sides fairly is--well, a little disarming. It also keeps the movie from being laugh-out-loud funny. (Minus the scene where Hough coughs up Peach Schnapps; I once spit expensive whiskey all over a grand piano.) There are lots of good jokes, many of which come from Brand and a few from Spencer, who can play a great cynic, as it turns out. It's just that Cody has opted for sweetness over bile, and so it feels like she's wearing kid gloves.

Which isn't really that terrible a sin to commit, not even in Lamb's book. Cody is often treated as a hipster with a permanently arched eyebrow, but the neat thing about Paradise is that she proves that the heart pumping blood through her more caustic efforts has pockets of genuine sentiment. The author is showing more dimension. In truth, Paradise left me wanting more. Not just sharper writing, but more time with the characters. I think had Lamb spent more than one night on her quest for corruption, it could have allowed the script to breathe a little, the transformations would not have had to happen so fast.

But geez, that really does seem like the tiniest of quibbles once you lay it out. When it comes down to it, I enjoyed myself watching the movie, it was easy entertainment. Paradise may not be perfect, but what ever is? And since when have we all gotten so embroiled in our own snark that we can't handle seeing characters in a movie actually be nice to each other?

Rest easy, Diablo Cody. Your picture isn't coming down from inside my writer's locker any time soon. 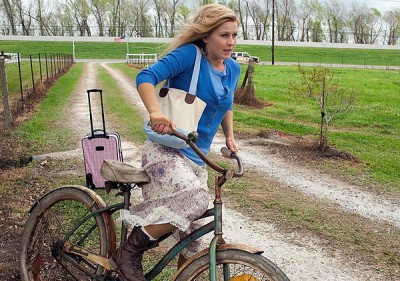