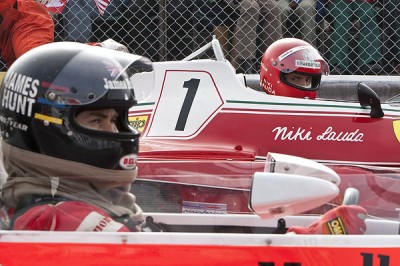 Though there is much anticipation for Rush, the "based on real accounts" Formula One picture starring Thor himself, Chris Hemsworth, I don't feel it really warrants much time or space in terms of critical reviews. If you want to know whether or not Rush is worth seeing, my opinion is probably less valuable to you than your own. While I know there are many of you thinking, "Tell me something I don't know" and "How does that make Rush different from any other movie?" I ask that you bear with me a second. I'm working a theory here.

Rush is a Ron Howard film, and how you react to that phrase is likely indicative of how much you'll enjoy his latest. Think back over how you generally feel about Ron Howard motion pictures, from Splash to A Beautiful Mind all the way through to last year's The Dilemma. Rush is no different than any of those, so love 'em, hate 'em, or indifferent, expect more of the same. Ron Howard may be different things to different people, but at least he's consistent being those things. 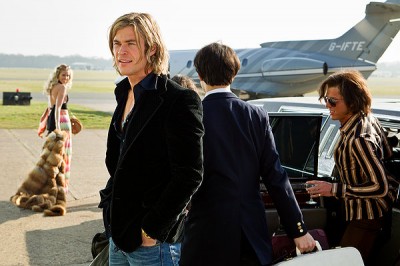 For me, Howard's films tend to be thoroughly average, and Rush inspires me to the ambivalent shrugs the average truly deserve. For this 1970s period piece, the director reteams with Frost/Nixon screenwriter Peter Morgan. Their collaboration re-creates a years-long rivalry between British racer James Hunt (Hemsworth) and Austrian champion Niki Lauda (Daniel Brühl, Inglourious Basterds). The competitors were opposites in every way. Hunt was an impulsive party boy, while Lauda was uptight and calculated. Their strongest racing season saw them going neck to neck and at each other's throats for the better part of a year. Several mishaps and obstacles lay in their paths, but both charged on in search of victory.

In between those races, we catch glimpses of the racing men's personal lives, including Hunt's troubled marriage to a beautiful model (Olivia Wilde, People Like Us) and Lauda's efficient union with a woman who challenges him to feel (Alexandra Maria Lara, Control). It's all pretty basic, the predictable stuff that sports biographies are made of. Morgan writes the personal material with his usual cardboard and ham. Rush's drama is at once stiff and bland and incongruous in its exaggeration. Hemsworth plays Hunt like he's channelling Peter O'Toole on a bender, while Brühl is auditioning for the Keir Dullea understudy role in a German production of 2001: A Space Odyssey. Noble efforts from both, but the script has reduced them to cartoons. It's the big, friendly lion vs. the sneaky rat. (And in case you don't figure it out on your own, don't worry, they spell it out for you more than once.)

One gets the impression that the filmmakers thought the characters would sort themselves out by virtue of being real people, and they would focus their attention on the racing instead. Much advance hype has been devoted to how Ron Howard and cinematographer Anthony Dod Mantle (127 Hours, Antichrist) developed new techniques to make the races look exciting on screen. This includes melding archival footage with new footage, POV shots, and even taking us inside and under the hood of the cars. I am not sure who thought close-ups of pistons pumping would get our blood pumping, too, but they were wrong. Stuff like that just calls attention to how technical Howard's approach really is. He's so concerned about the little details, the big picture is lost. 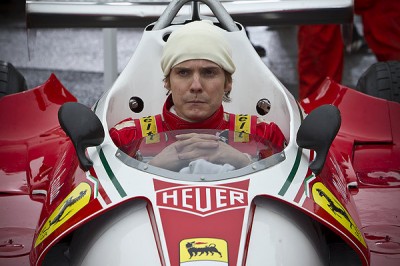 This makes it doubly tragic that Rush fails to render Hunt and Lauda as men we care about. Sports movies only work when the audience is rooting for someone's victory and another someone's loss. Which of these two caricatures ends up on top is of little consequence. Why invest in their fate when we can just let Morgan's cheap poetics and Hans Zimmer's on-the-nose orchestration tell us what it all means?

I don't know what I expected. In racing terms, Ron Howard is always the middle of the pack.

No, wait, scratch that. I do know what I expected. It was for him to transcend for once, for him to stop playing it safe and drop the journeyman routine and give us something with guts and heart. Apparently that was expecting too much. He's a pedestrian, he can only walk, never race.

Your mileage, as ever, may vary. Like I said at the outset, if you liked Cinderella Man, you'll probably like Rush; whereas if you hated How the Grinch Stole Christmas...well, in that case, you just have good taste. Regardless of where you fall on the spectrum, however, if you really want to see a captivating true story about Formula One, rent the documentary Senna instead. It's one movie we should all be able to agree on. It's great, and Rush will always be eating its dust. 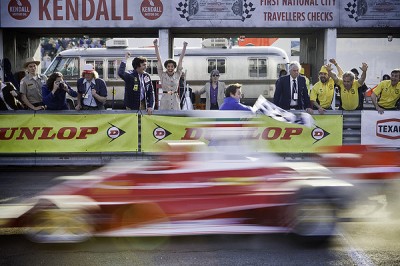