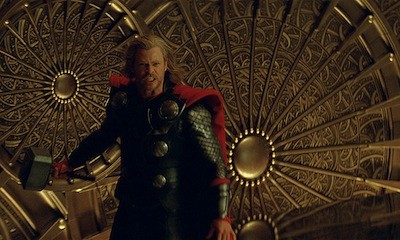 A goldilocksed hero with a hammer. Giant villains made out of snow. A fish-out-of-water plot. A bridge made of rainbows, for chrissakes!

Thor is a movie that, on paper, just sounds too silly to work. It's an alternately weird and goofy comic book property featuring a wooden hero who, in his best incarnations, is an arrogant jackass. The characters have funny names like Volstagg and Fandral and friggin' Frigga. They wear armor and swordfight and live in a magical realm in the sky. It's challenging on paper, a property that some (myself included) might argue misses more often than it hits. And for as much as I love Kenneth Branagh, is modern cinema's preeminent Shakespearian director really the best choice to helm a superhero fantasy special-effects movie?

Then again, I was skeptical about Iron Man, too, and look how good that turned out. So, forget the doubts, I say yes to it all. This whole thing works. What the hell! Thor kicks off the summer film season in all the right ways.

For those not steeped in comic book lore, The Mighty Thor was the creation of Stan Lee, Larry Lieber, and most important of all when you consider the tripped-out designs that still hold strong to this day, Jack "The King" Kirby. The serial had its origins in Norse mythology, with Thor being the god of thunder, the arrogant son of the all-father Odin. He fights big monsters and is regularly tricked by his brother Loki, the prince of lies. In the Marvel Comics version, these mystical figures are thrust into the modern world, where all their super strangeness stands out like an orc at an elf party. I mean, come on, you know what I mean, right?

Branagh's Thor, built from a script by a team of writers, embraces all this goofball material and runs with it. The story opens in Asgard, a weird and wonderful place. The computer effects that bring this divine realm to life are fantastic, and it is one of the best and most complete digital environments in recent memory. Thor (Chris Hemsworth, Star Trek) is about to be crowned king and take over from his father, Odin (Anthony Hopkins), when an old enemy attacks and disrupts the proceedings. Angry that the Frost Giants have invaded his home and interrupted his royal bar mitzvah, the hotheaded brawler leads his closest pals--a trio of swordsmen called the Warriors Three, an awesome swordswoman named Sif (Jaimie Alexander, from TV's "Kyle XY"), and his fey brother Loki (Tom Hiddleston, the BBC version of "Wallander")--to the arctic dimension to confront King Laufey (Colm Feore). This rash action destroys the truce between the two kingdoms, and as punishment, Thor is banished to Earth. 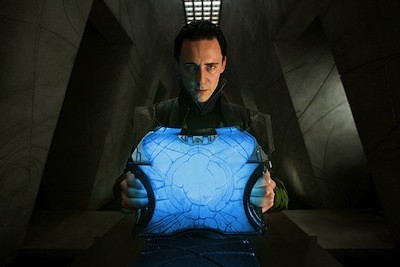 The god of thunder has been sent down to our level, both literally and figuratively. Stripped of his powers, he is just a mortal man--and one with no ability to cope in his new home. While stranded in New Mexico, he is semi-adopted by Jane (Natalie Portman), an astrophysicist who was tracking the odd energy patterns that signaled Thor's arrival. This energy also attracted the attention of SHIELD, the government agency that has been monitoring superhero activity through all the Marvel movies since Tony Stark put on his iron armor. As Thor learns to deal with living on Earth, his absence on Asgard gives Loki the opening to make his move. Here, the real story begins.

Thor gets about everything right. The action is exciting and the special effects look amazing. The heroics are huge and meaningful. Thor is one superdude who is actually fighting for something: his home, his friends, and himself. To get home, he will have to become a better person. The movie's plot is well-structured, moving at a fairly brisk pace to get us from one fight scene to the next, but also taking its time to develop characters. Hemsworth is perfect as the golden gladiator, bringing an irresistible charm to the macho swagger and nailing the jokes about Thor's worldly ignorance with excellent comic timing. At over 6' tall, he definitely towers over Natalie Portman, who admittedly is a little lost in the material already. Kat Dennings regularly upstages the lead actress as her humorous sidekick, but when the film isolates Thor and Jane, there are definite sparks.

Loki's villainous scheme is straightforward in execution, though its design is actually rather tangled. Here, Kenneth Branagh's classical training comes into play, and the director proves especially adept at dealing with all the regal mythology. If there is one thing the team could have done better on this side of things, though, it would be Loki's general behavior as the central bad guy. They could have easily applied more Iago-like technique to the villainous mischief and made the would-be ruler a more active manipulator. It seems to me that Marvel movies tend to downplay the villains so they never outshine the heroes quite as much as they do in, say, the Batman franchise. (Magneto doesn't count, he's as integral a member of the X-team as his arch foes, and his gray morality keeps him from ever being a complete villain.) I mean, think about it, how long does it take for you to recall the big bads from either of the Iron Man movies? The crooks and thugs are overshadowed by Tony Stark. This might be a smarter tactic; it seems to work even if it does suck a tiny bit of life out of these capes-and-tights parties. Tom Hiddleston makes do with the Loki material, but he could have been so much more. Loki should have been far more prominent, spreading plenty more lies and being plenty more gleeful in doing so. 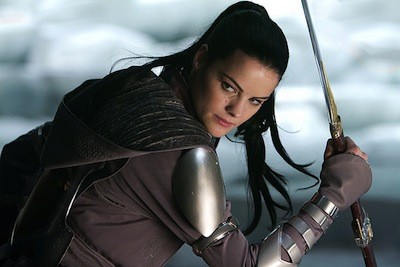 Another aspect Marvel movies get right, as opposed to their Distinguished Competition, is having strong women in prominent roles. As Warner Bros. prepares to ruin Wonder Woman forever, Marvel gives us another kick-ass lady (remember Black Widow?) deserving of her own franchise. Jaimie Alexander's rendition of Sif is every bit the equal to her male allies, and she gets an integral role in one of Thor's major battles. Really, all of the women in the other supporting roles feel necessary to the plot. If this were a Batman movie, Natalie Portman would already be dead, but since it's Thor, even Renee Russo, playing Thor's mother (the aforementioned friggin' Frigga), gets to trade punches with a Frost Giant.

All in all, color me a whole rainbow bridge of impressed. I went into Thor with mild expectations and left already planning to go and see it again. (Though, I may go with the non-3D option; Asgard looks pretty great with the added dimension, but otherwise, it's generally superfluous for at least 3/4 of the film.) Thor has everything you want in a good-time comic book movie--the fights, the sights, the humor--and best of all, it seems like the people who put it together had a good time doing it. The love for the job translates onto the screen. Embrace this one, folks. It's going to knock you back in your seats. 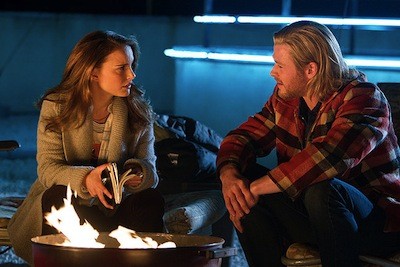