Please Note: The stills used here are taken from the bonus DVD included in this combo, not the Blu-ray edition under review. 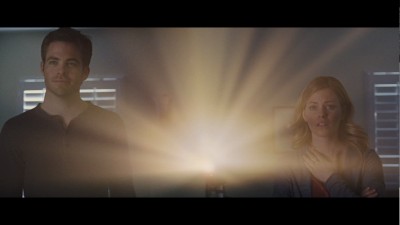 When People Like Us opens, we see Chris Pine performing in a role he seems born to play: a salesman. The Star Trek actor stars here as Sam, a hustler who works for a company that basically takes trash from different companies, calls it surplus, and moves it around the world for fun and profit. Sam is closing a big deal, but what he thinks is going to be a killer day becomes a killer for a bunch of reasons he didn't anticipate. First, he discovers a deal he made to ship some soup south of the border has gone the wrong way, and not only is he going to lose his big commission, he might possibly be in legal hot water. This, for most of us, would pale next to the second revelation: that Sam's father, a famous record producer, has passed away. Not for Sam, though. He didn't much care for his pop.

Nevertheless, Sam and his girlfriend, Hannah (Olivia Wilde, Tron: Legacy), head to California for the funeral and a tense reunion with Sam's mom (Michelle Pfeiffer, Hairspray). Sam plans to get in and out of this trip as fast as possible and get back East to sort out his career, but that's not to be. His dad left him with a shaving kit full of rolls of $100 bills and instructions to give it to a kid he's never heard of (Sinister's Michael Hall D'Addorio). Sam doesn't want to give up the cash, so to try to find out what's up, he starts spying on the kid's mom, Frankie (Elizabeth Banks, The Hunger Games). After crashing her AA meeting, he realizes that Frankie's the half-sister he never knew about. Turns out, she felt abandoned by their father, too, though in her case, it was literal. She hasn't seen him since she was fifteen, and now she's struggling to raise her son all by herself.

Of course, the right thing to do here would be for Sam to walk up and introduce himself and hand over the money, but being the kind of operator he is, Sam insinuates himself into Josh and Frankie's lives and becomes their friend. He's already alienated Hannah and he's fighting with his mom, and as the law barrels down on him, the time he spends with the family he never knew he had pushes him to start facing all that is wrong in himself, why he keeps running away, and why he's so angry at his old man. 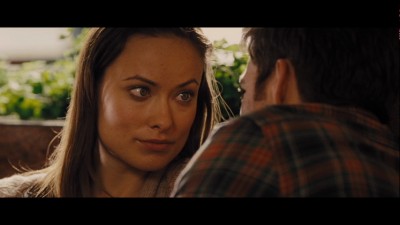 Sounds pretty schmaltzy, huh? I'm not going to lie, I skipped People Like Us in the theater because I thought the Alex Kurtzman-helmed drama was going to be overly sentimental hokum. While I can't say that it completely escapes that tag, it's actually pretty good hokum and a surprisingly enjoyable movie. For all you folks who think critics are cynical bastards who never let themselves be won over by a crowd-pleasing film, here's irrefutable proof that you're wrong: I was completely suckered by People Like Us.

Granted, it's a slick production and it skids on its own self-belief more than once, but that's okay. People Like Us is doing its damnedest to get its heart in the right place. First-time director Kurtzman's best asset for doing so is his first-rate ensemble. Olivia Wilde and Michelle Pfeiffer are both excellent, providing a gravitational pull that anchors the drama, and Michael Hall D'Addorio has the smart-ass kid routine down pat. Chris Pine is a bit of weak link--he's just a little too cocksure and ends up being a little hard to like (you know, like a salesman)--but he's balanced out by Elizabeth Banks, who never fails to deliver a warm, inviting performance. Where Pine is all bluster and technique, she is all heart.

People Like Us was written by Kurtzman, seasoned scribe Roberto Orci, and first-timer Jody Lambert, and together they establish a strong narrative structure that mostly let's the emotion and flow of the situation dictate where the story goes. This can be a bit of an Achilles Heel as the movie wears on--it maybe takes too long to get where Sam reveals the truth, and then even longer to dig himself out of the hole--but since the screenplay mostly avoids overtly explaining how we are supposed to feel or any lesson we might glean from the action, Kurtzman is able to glide through the slow patches. People Like Us could have been a real preachy film, hammering on about choices and moral responsibility, but it mostly lets the story speak for itself. The final scenes put a tidy bow on everything, but it's the right bow, making for an emotionally effective finish. 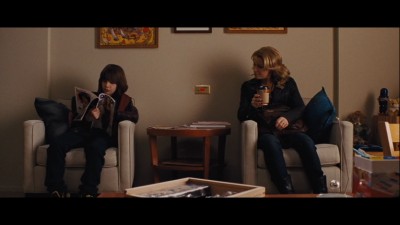 Video:
People Like Us is shown in widescreen at a 2.35:1 aspect ratio, with the picture encoded for 1080p High Definition. It's rendered nicely, with strong colors and not too much grain. There is some minor enhancement that leads to a slightly chalky look at times, but the overall detail is excellent, with realistic skin tones and nice variation between darkness and light.

Sound:
The main soundtrack is the English language 5.1 DTS-HD Master Audio option, and it's pretty great. For a movie that is mainly dialogue driven, there is actually lots of atmosphere here, with ambient effects moved around to bolster the realism of the piece while never stepping on the actors' lines. When music takes over, the sound is loud and full.

Alternate audio choices include an English descriptive track in 2.0, along with French and Spanish in 5.1.

The bonus DVD has a Dolby Digital 5.1 mix. 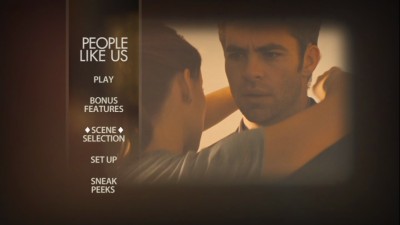 Extras:
The ample selection of bonus material begins with a standard edition DVD version of the movie packaged in a double-tray case alongside the high-def Blu-Ray.

The on-disc extras are led by no less than three audio commentaries, all pairing writer/director Alex Kurtzman with other members of the production team. The first two are full-length commentaries, one with stars Elizabeth Banks and Chris Pine, and the other with co-writer Jody Lambert. They provide a nice balance, as the one with the actors is more chatty, while the one with Lambert (who was also a producer) is more to the nitty gritty. The third option is just over half-an-hour of select-scene commentary with Michelle Pfeiffer. Both actor commentaries are also on the DVD.

The 14-minute featurette "Number One with a Bullet: The Story of People Like Us" offers your standard behind-the-scenes material, including on-set footage and interviews.

The rest of the stuff tends to be along the lines of deleted scenes, including over 18 minutes of actual deleted and extended scenes, which come with director introductions. There is also nearly 5 minutes titled "Taco Talk" that shows Banks and Pine improvising with one another to get a handle on their character relationship. Finally, we get the cursory 4-minute gag reel.

FINAL THOUGHTS:
If you're hankering for some quality mainstream Hollywood feel-good entertainment, and in a way that isn't either a pejorative or a guilty pleasure, then People Like Us is a surprisingly good choice. Sure, this story of long-lost siblings and inherited money has its contrivances and coincidences, but first-time director Alex Kurtzman treats his characters and their lives with respect, looking at some of the tougher emotional choices as troubled, hurting people are put on the path to do the right thing. A lot of the work is done for Kurtzman by his excellent cast, especially Elizabeth Banks, but hey, isn't that what good casting is all about? I didn't walk away from People Like Us feeling like I'd had a grand epiphany, but I did finish the film with a slightly kinder view of my fellow man, and that's no mean feat. Not a classic, but a good evening's viewing all the same. Recommended. 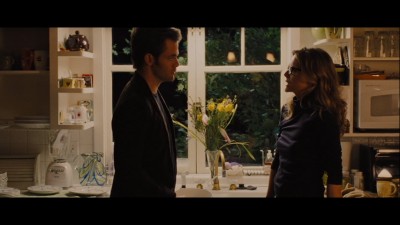