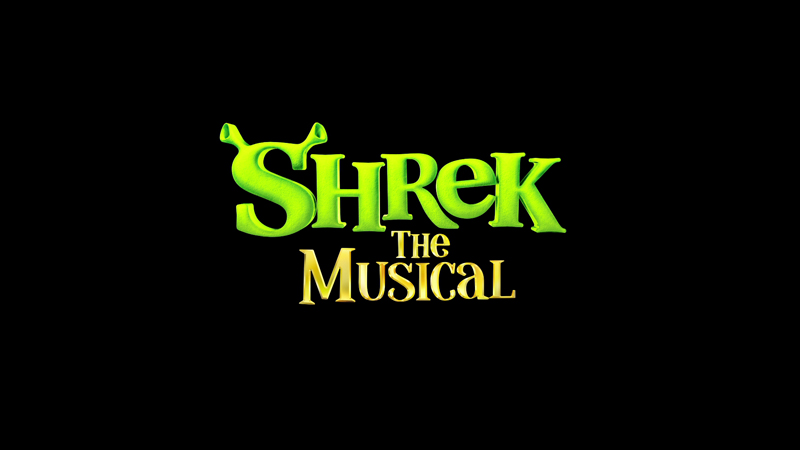 
The Show
For as creatively bankrupt as we critics and reviewers continuously label Hollywood, what does it say about Broadway that they continuously turn to Hollywood for ideas for shows, despite the fast majority of them failing to recoup their costs despite a baked-in familiarity for the audience? I remember sitting in the audience of the short-lived adaptation of 9 to 5, which featured a fantastic cast headlined by Allison Janney and Megan Hilty, and which picked up a haul of award nominations, thinking, why spend so much to recreate an experience that worked so well in a format that could reach such a wider audience. Unless you're creating a The Lion King (and how many of those have their been?) it seems like a loser's bet.

Of course, Broadway keeps finding suckers to invest (read this story for one of the most amazing stories about fools and their money) and movies to adapt, and in 2008, it was Shrek's turn. A ton of money was sunk into bringing the ogre's animated world to the stage, and though the money could all be seen on-stage, and the show received a number of award nominations (and even a few wins) a year later, the doors closed and no profit was to be had, But unlike so many shows that come and go, lost to history outside of a random local production, Shrek has received a home-video release, so there's no real financial or convenience concerns preventing you from giving the show a chance. 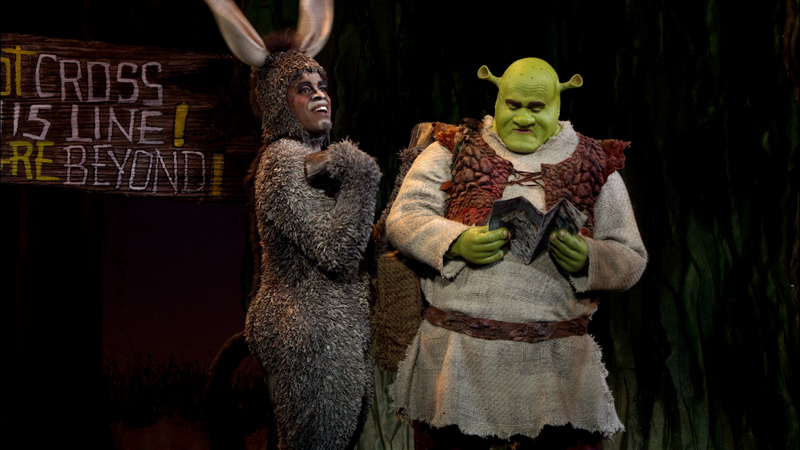 The stage show doesn't stray dramatically from the well-known film, keeping the story of Shrek (Brian d'arcy James, in full ogre make-up), his pal Donkey (Daniel Breaker, playing a mix of Eddie Murphy and Tim Meadow's Ladies Man) and their quest to find Princess Fiona (Sutton Foster) for the evil Lord Farquaad (Christopher Seiber), in order to regain control of his beloved swamp. It also keeps the same tone, adding little touches of offbeat humor, often theater related, and often gifted to Seiber's nutty midget (an effect achieved through some likely painful knee-focused movements.) If you've seen the movie, you know what to expect, with only Foster trying some new things with her character, though the newly-added scatalogical jokes weren't particularly necessary.

As this is a musical though, many songs had to be added to fill out a run-time worthy of Broadway prices. With the wonderful Foster on-board, Fiona gets the biggest and best solos, such as the tremendous song-and-dance "Morning Person," adding both humor and heart with her performance,, while James lends his substantial pipes to a number of spotlight songs, like the excellent first-act finale "Who'd I Be." The real stand-outs though are the ensemble pieces, featuring Avenue Q's John Tartaglia, with "Story of my Life" and "Freak Flag" being the most memorable. Though technically solid and well-performed, there's not much here you'll be humming in the days after watching, with the possible exception of Breaker's Motown-ish "Make a Move."

The songs may not be as memorable as some shows, but the way creative solutions were made for translating the film to the stage, under the guidance of original director Jason Moore (Avenue Q, Pitch Perfect), resulted in an incredible display of technical prowess and creativity, from the rotating and elevating, partitioned center stage that helped depict the story's road trip scenes to the massive dragon puppetry, and the many interesting ways practical special effects were integrated in between. So much is happening on-stage that its hard for the cameras to capture it all, but the almost informal presentation, which is marked by occasional shaky hand-held camera work, makes it feel even more in-the-moment. This show may not have set Broadway on fire, but it's entertaining enough to be worth a look if musicals are your thing. 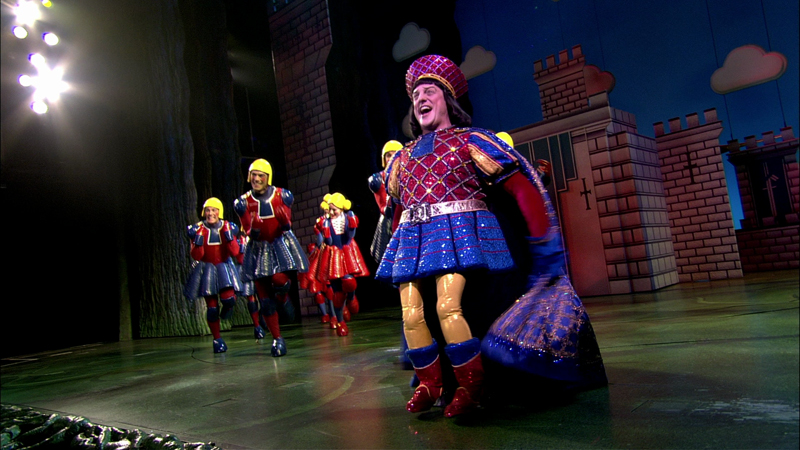 The Discs
This film arrives on a two-disc set (one Blu-Ray, one DVD) in a standard-width BR keepcase (which is inside a foil-coated slipcover.) The Blu-ray features an animated menu, offering the option to watch the film, select chapters, adjust languages and check out the extras (though the chapter menu is a bit useless for a musical, labeling each chapter with only a number, rather than listing the songs.) There are no audio options, while English SDH, Spanish and French subtitles are available.

The Quality
The 1080p, AVC-encoded transfer sports beautiful color, from the bright greens of Shrek's skin to the deeper tones of the set, and quality fine detail on the close-up angles, showing off the excellent costimes and make-up (though the image is a touch softer in the wide shots.) Black levels are more than sufficient to prevent murkiness from taking over, an important factor, since much of the stage is dark for the majority of the show.

The DTS-HD Master Audio 5.1 audio is quite impressive for the majority of this, giving the cast's voices just the right heft and clarity in the center channel, while the music and audience reaction lives in the surrounds, giving you an in-the-moment feel (with a bit of oomph from the low-end in a few spots.) Though the crowd gets a bit loud in places, that's pretty representative of many live performances. The only moment that's an issue is in the finale performance of "I'm a Believer," which sounds tinny and distorted, but as the characters are supposed to be singing into microphones, this may be an intentional effect.

The Extras
Up first the the Shrek the Musical Songbook, which lets you jump to any of eight songs in the show, or play all (with a shuffle option.) Considering the show has at least 10 more songs in it, this is a bit limiting, but considering the chapter selection doesn't give you this option, at least these are here. Those same seven numbers are also presented in a "sing along" format, with on-screen lyrics that are colored karaoke-style as the songs progress. There's not a lot of numbers that will inspire home performances though, with maybe "Freak Flag" serving as a good time (explaining why it's the track that backs the disc's menu.)

"From Swap to Stage: The Making of Shrek the Musical" (8:06) is hosted by the original Fiona, Cameron Diaz, and gives you a brief overview at how the stage show came together through interviews, clips and behind-the-scenes footage that illustrate the story, the songs and choreography, as well as the changes from the film to the stage, mainly through directors Moore and Rob Ashford's thoughts about the show.

The disc wraps with six Dreamworks trailers and a quartet of short musical clips from Dreamworks animated films. 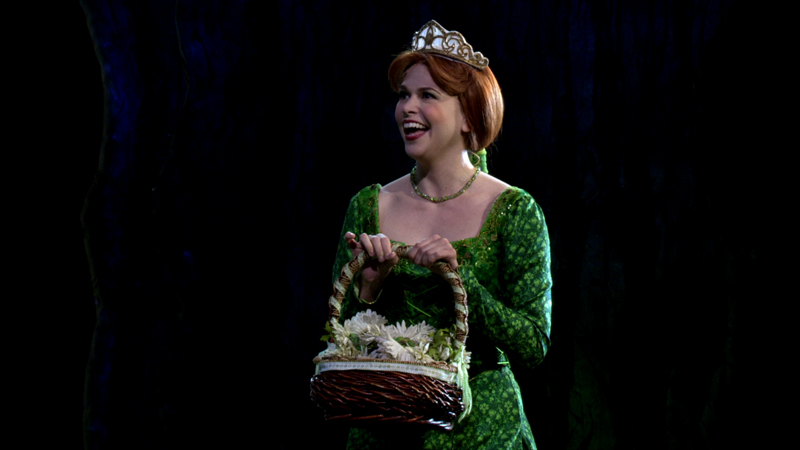 The Bottom Line
Shrek the Musical is a visual and technical spectacle with an excellent cast, but the most important element, the musical numbers, just don't stick with you when all is said and done. However, if you missed out on the show's two-year run on Broadway, now's your opportunity, and the presentation is excellent, at a fraction of the price of the live performance. There's not much in the way of extras, but at least the musical is available for everyone to enjoy, unlike so many stage shows.