Deceptive Practice: The Mysteries and Mentors of Ricky Jay


Ricky Jay is known to many for his supporting acting work in David Mamet films like Heist or in Paul Thomas Anderson films like Boogie Nights. But save for his appearances on Broadway, or for the lucky ones who managed to see his show Ricky Jay and His 52 Assistants which appeared on HBO some years back, little is known to many contemporaries about his sleight of hand work or other magician's tools and tricks. And with Deceptive Practice. the hope may be to shed some light on it. 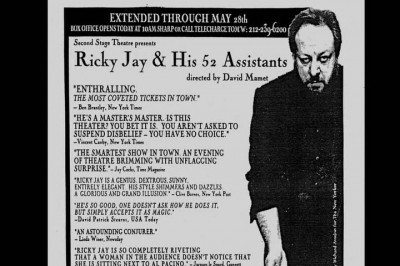 The film is directed by Molly Bernstein, a longtime documentary editor, mainly of the "A Walk" series chronicling parts of New York city, but this film is her directing debut. Jay has been doing magic in one fashion or another for most of his life, starting at the time when he was five years old and performing for a television audience. His comfort onstage grew and evolved, to the point where he served as an intermission act between Timothy Leary and Ike & Tina Turner in shows in the 1960s. But he remained faithful to the magician's craft, spending copious amounts of time with magicians such as Charlie Miller and Dai Vernon, and struck up respect and admiration for contemporary musicians such as Michael Weber. Throughout the film, loads of old footage of some of Jay's aforementioned peers is sprinkled in, along with old film of Jay from his specials, including one where he appeared on the Dinah Shore Show next to Steve Martin in 1970. What people might not realize about Ricky Jay in general, but will understand after watching Deceptive Practice is that the man is serious about his magic, card tricks, and all facets of it from preamble to execution. Jay wears his jacket sleeves on his forearms to avoid any potential optic of "cheating" during performances. The brilliance of his show (among other things) is his conscientious steps to take to get the viewer's trust with his declarations of transparency. It makes the payoff in his tricks all the more amazing and awe-inspiring to the most jaded a patron.

As we learn through Deceptive Practice, his anecdotes about Miller and Vernon which he recounts numerous times onstage at his show are more likely genuine because he is such a student of the craft. He has books that explore magic and magic practices from a variety of periods, and his work with an examination of other magicians such as Cardini and Slydini to see how they performed is given exploration to boot. A rough equivocation to be sure, but Jay searches out magic and illusions much in the same way Caine would in Kung Fu or a chef may do for techniques, always looking for perfection that may not be attained, but the ultimate goal could still be realized. There is always more to learn for a magician and Jay illustrates this.

One note of importance when it comes to watching Deceptive Practice, which is the film's subtitle is "The Mysteries and Mentors of Ricky Jay." It is not a biographic look at Jay, and moreover Jay is quite apprehensive about his private life and growing up as a rule, other than saying in the film he left home at a very early age and eventually got to California to learn more about the craft. You could speculate on the reasons why all you want, but to do so would be futile and besides, the slightest bit of insight into Jay as a person may deter those who regard Jay the performer so highly (as he would appear to see it), which would be another bit of control he exerts over his audience. 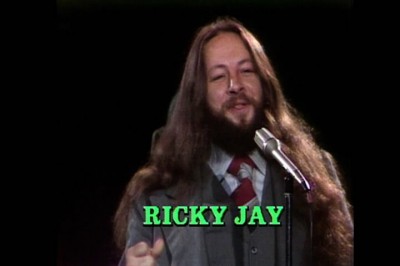 I did not know much about Ricky Jay other than what I outlined earlier, and after watching Deceptive Practice, I know that Ricky Jay with Allman-esque hair down past his shoulders is a damned frightening thing. But I learned that even without the personal information that he remains passionate about what he does and appears to always be looking for ways to improve it. But how would I know? A magician never reveals his secrets, right? Still, the fruits of Jay's various labors, be it magic, or books or art, are all a sight to behold. Ricky Jay may be the last significant torchbearer for the craft, and the craft gets its just due in the movie.


Deceptive Practice is adorned with a 1.78:1 anamorphic widescreen presentation, and considering it juggles a few difference sources in the feature it looks pretty good. The film grain is present and abundant during viewing, with colors and flesh tones appear to be natural and faithful to the feature. Most of the practically shot film is done via handheld camera and the vintage video is as solid as can be expected, and generally the image is devoid of edge enhancement, haloing or artifacts. It looks fine throughout.


The disc comes with a Dolby Stereo track which is hardly surprising. Everything occurs in the front of the soundstage and sounds clean and consistent throughout the listening experience, with a brief flirtation to the subwoofer halfway through the film. This is dialogue driven with no effects to even contemplate a six-channel surround track, the interviews sound fine and without complaint.


There are a few things here, and it should be noted that most of the material is in full frame, perhaps to illustrate just how long it has taken to get this film realized. Starting off is a question and answer session with Jay and Mark Singer, writer of a New Yorker piece on Jay, as they attended the New Yorker Festival (47:19) The general disclaimer of no magic here is mentioned as Jay talks about his idols, friends and more about the trade in an interesting discussion. Next is "Never Before Seen Performance Footage and Crazy Anecdotes" (29:29), which is somewhat self-explanatory as we witness an excised moment from 52 Assistants, then later Jay discusses possible moments in other acts and general thoughts on his personal interests and art collection, and working with David Mamet. "Jay's Colleagues on Camera" (19:33) includes film with Martin and interviews with Mamet, Anderson and Boogie co-star Heather Graham as they talk about Jay the actor and person, and some of his tricks which were performed onset. "Ricky Jay and Michael Weber on Mentors and Magic" (15:22) is also somewhat evident in the title, and also features some insight on working with one another and training others. "Unseen Animation" (1:17) is what it says, and "Promo for Bob Dylan's Love and Theft" (1:09) is a commercial for the musician's album, and when Jay appeared in a music video for "Tweedle Dee & Tweedle Dum," a song that appears on said album. The previously mentioned New Yorker piece is included for viewing as a DVD-ROM supplement (though it can be located online for those without DVD-ROM access) and the film's trailer (2:28) rounds things out.


Deceptive Practice not only shows us a brief glimpse into what makes Ricky Jay tick, but gives us a look at card illusions, sleight of hand and general trickery through the years with a variety of people who honed their craft as Jay continues to do. It should be repeated that the film is less about Jay's past and more about his history onstage, though there are moments that seem to show us his motivations if one looks hard enough. Technically the disc is without complaint and from a bonus material perspective is solid (though an off-topic commentary from Jay would have been a nice cherry on top). A definite recommendation for a change of the normal viewing.