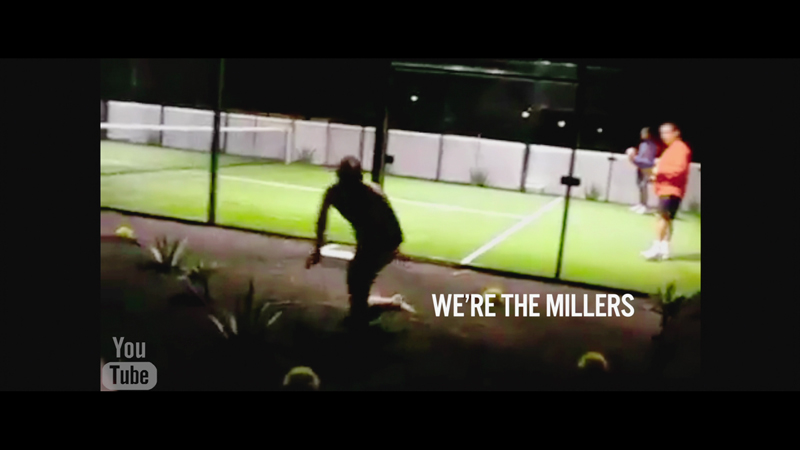 
The Show
When Jason Sudekis said his understated good-bye to Saturday Night Live, it was surprising how many viewers fell into the "good riddance" camp. Sure, he didn't have a huge arsenal of fan-favorite characters, often playing the straight man, but his track-suit-wearing dancer on "What's Up With That?" was a guaranteed laugh and Pete Twinkle (Greg Stink's ESPN co-announcer) was hilarious. But of anyone on SNL, Sudekis was the most likely to make the transition to leading man, as his role on 30 Rock, as Liz Lemon's would-be boyfriend, proved clearly.

Thus, it's in no way surprising to see him paired with Jennifer Aniston as the lead of We're the Millers, playing a role seemingly tailor-made for him. David Clark is a moderately-successful low-level pot dealer, lacking the motivation to improve his role in life, but with a wiseacre sense of humor and confidence that makes him fun to be around. When he unwisely decides to defend his naive neighbor Kenny (Will Poulter) against some criminals, he quickly finds himself a target, robbed of all his pot and money. 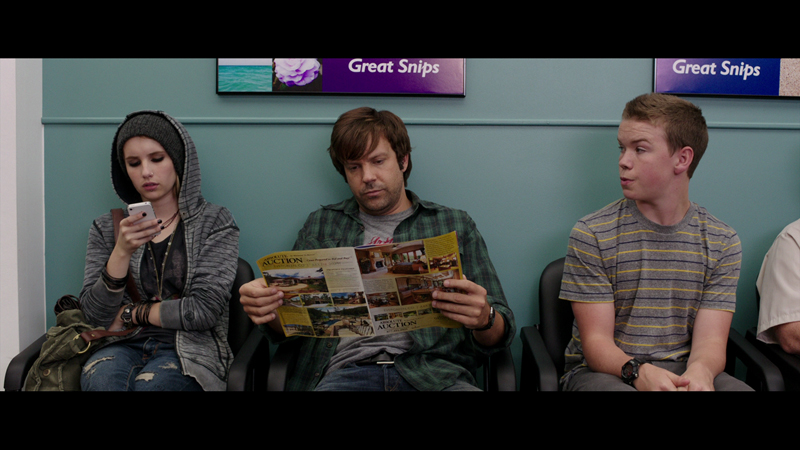 In order to settle his debt with his eccentric, whale-obsessed weed source Brad (Ed Helms), he agrees to fly into Mexico and come back with a small delivery of pot. Obviously there wouldn't be a movie if this went according to plan, and it certainly does not. In order to avoid suspicion, David pulls together a fake family to act as his cover, with nerdy Kenny, a street kid named Casey (Emma Roberts) and Rose, the stripper who lives in his building (Aniston.) If something could go wrong for the "Millers", it does, including a run-in with an adorable pair of fellow travelers (Nick Offerman and Kathryn Hahn) who complicate everything, while their daughter provides a possible love interest for Kenny. (Thomas Lennon, Scott Adsit, Ken Marino and Luis Guzman are also on-hand to provide some fun, but too brief cameos, along with Jason Mewes-in-training Mark Young.)

While the plot progresses just as you would surmise from the premise, including a burgeoning relationship between David and Rose, there are enough funny surprises to keep you off balance, including a couple of broad scenes you might find yourself watching through your fingers due to their uncomfortable nature (one of which feels severely twisted, even if it shouldn't.) Unfortunately, this movie about a quartet of misfits who pretend to be a family succumbs to predictable sentimentality, but at least it has fun along the way, guided by director Rawson Marshall Thurber (Dodgeball.)

If Sudekis is your cup of tea, he's in peak form here, nailing that smarmy delivery he does so well (at one point breaking the fourth wall in a way only he could get away with,) while Aniston, who looks great as a stripper in the only non-topless strip club in America, does what she's done many times before, being cute, but a bit naughty, which kind of works with her pretending to be a mom. The kids are much more entertaining though, with their culture clash powering much of the comedy. It goes without saying that Offerman and Hahn are great, but when they share the screen with Sudekis and Aniston it's hysterical.

This disc includes an extended cut of the film, which runs eight minutes longer, thanks to the addition of several scenes of different lengths, including a quick hit from Roberts and a sing-a-long with Offerman and Hahn. There's no reason to watch the shorter version considering the difference in length. Whichever version you watch, make sure you watch though, the outtakes before the credits. There's an on-set prank that's actually pretty funny. 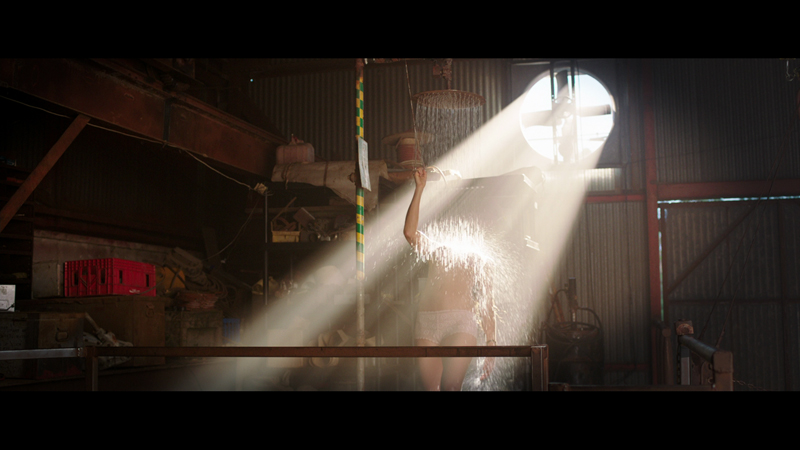 The Discs
This film arrives in a two-disc set, one Blu-ray, one DVD, in a standard-width, dual-hubbed BR keepcase, which inside a slipcover that features a lenticular animation of the Miller family in a before-and-after pose. The Blu-ray features WB's usual terrible static menu, offering the option to watch the film, select chapters, adjust languages and check out the extras. Audio options include English DTS-HD Master Audio 5.1 and Spanish, French and Portuguese Dolby Surround 5.1 tracks (with only English on the extended cut), while English SDH, French, Spanish and Portuguese subtitles are available.

The Quality
The 1080p, AVC-encoded transfer is just what you'd expect from a recent studio features, with strong, appropriate color across the board, a high level of detail that shows off plenty of texture in the image and solid fleshtones throughout the picture (compare Roberts' milky skin to her castmastes.) Black levels are nice and deep, coming into play in two core scenes to define the image well. There are no notable issues with digital distractions, resulting in a pleasing image from beginning to end.

The DTS-HD Master Audio 5.1 track is solid for the film, which features a few moments where music and sound effects kick in, but for the most part dialogue drives the presentation, and the voices are clear and well separated. Once in a while the surrounds will get a bit of work from the sound effects, but for the most part they mainly boost the music (Aniston's strip club, as expected, is particularly involved when it comes to the soundtrack and the implementation of the low-end.) Overall, there's good range to the audio, but you feel like there should be more oomph.

The Extras
The biggest extra is a 16:18 reel of deleted (or alternate) scenes, including three alternate takes on the Guzman scene, more with Hahn and an out-of-nowhere musical appearance by Ben Folds that honestly couldn't have been wedged into the movie in any possible way.

"Millers Unleashed - Outtakes Overload." (7:37) unreels an assortment of ad-libs and other cut lines, which are fun mainly for watching the cast attempt to not laugh. The clips are intercut with interviews with the cast to give the whole thing a bit of structure. For some reason, there's more of the same in a separate piece "Gags and More Outtakes" (3:01), just without the interviews. This stuff is pure fun, as the cast are talented riffers.

The rest of the extras are made up of a series of brief featurettes, starting with "Stories From the Road," a set of seven quick bits covering a variety of topics. First up is "Extreme Aniston" (2:19) focusing on her dancing in the film and the cast polishing her apple. Then "The Miller Makeovers" (3:43) joins costumer Shay Cunliffe to talk about the characters and their costumes, while "Road Trippin' with the Millers" (2:47) looks at filming in the RV, which included a great deal of greenscreen work, and "Rollin' in the RV" (1:33) offers even more about the mammoth vehicle. (For some reason, these extra titles hate trailing g's.)

"Don't Suck Venom" (2:13) covers Kenny's big moment in the film, which to describe would ruin it (though the title doesn't help.) "Getting Out of a Sticky Situation" (2:41) similarly zeroes in on a particular moment, this time with Guzman. Helms' oddball dealer gets his own spotlight in "Livin' It Up with Brad" (3:46), talking about Brad's quirks and the insane effort required for a detail that doesn't really read on camera.

A couple of silly featurettes wrap up the bonus features. "I am Pablo Chacon" (1:37) is a mix of clips from the film with the cast saying the title of the featurette (it makes sense once you watch the film. "When Paranoia Sets In" (3:16) is an amusing featurette of interviews with the cast and director that suggests that maybe the entire film was just a front for smuggling drugs. It is made by a single line from Offerman, referring to the great Megan Mullally. 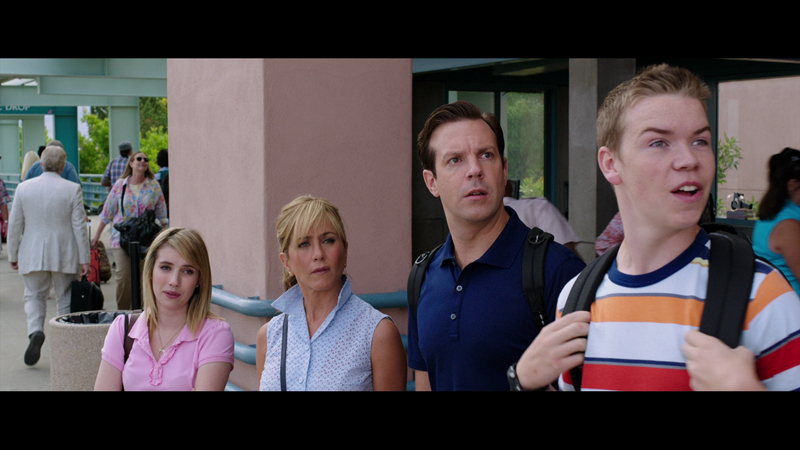 The Bottom Line
Though it is a bit awkward in its pacing and Aniston doesn't show us anything we haven't seen before, We're the Millers is generally an enjoyable time, though your taste for Sudekis will determine your own personal mileage. That said, there are plenty of laughs that don't emanate from his drug-dealing smart-ass, with the two kids and Offerman and Hahn carrying their weight. The Blu-ray looks and sounds solid and offers some decent, if mostly fluffy extras. Though it could have used a trimming, with this cast, the film is bound to become one of those movies you can put on anytime for a laugh.