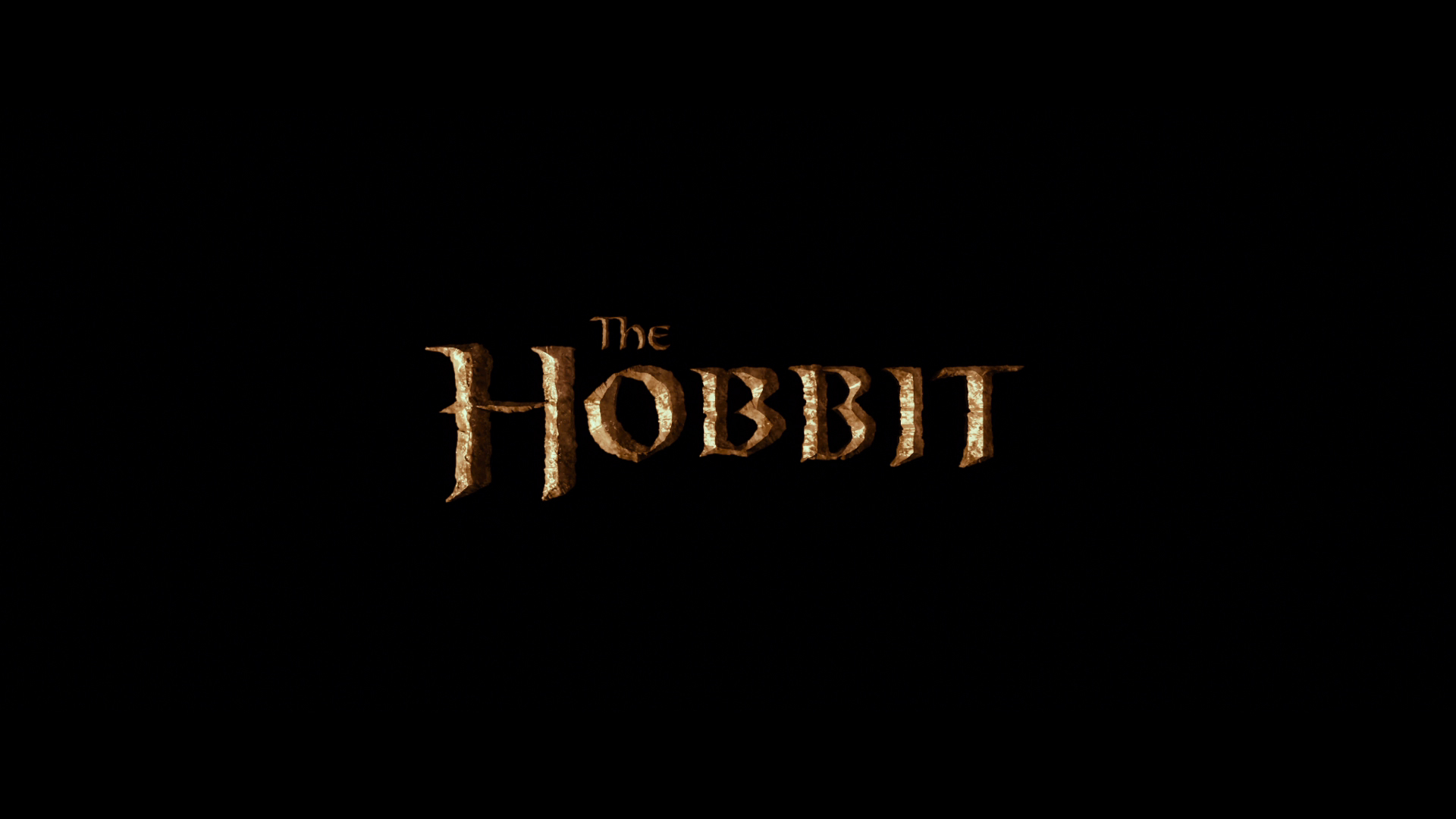 To say that bringing an adaptation of J. R. R. Tolkien's The Hobbit to the silver screen was a labor of love for director Peter Jackson would be an understatement. The turbulent development period for Jackson's newest fantasy trilogy began before his massively successful Lord of the Rings Trilogy made New Line Cinema millions. Before a frame of film was shot on The Hobbit: An Unexpected Journey, financing studio MGM entered and emerged from bankruptcy, director Guillermo del Toro developed the project for several years before bowing out due to MGM's financial turmoil, and Jackson left and ultimately returned to the director's chair. The Hobbit: An Unexpected Journey perfectly complements Jackson's previous trilogy but is its own beast; a sprawling, entertaining and wonderfully realized fantasy adventure bearing the distinct mark of Jackson and his New Zealand film company, WingNut Films. More action oriented and a tad less serious than The Lord of the Rings, this film is an excellent opening chapter in the planned trilogy.

The film opens with aging hobbit Bilbo Baggins (Ian Holm) memorializing his life in writing for the benefit of his nephew, Frodo (Elijah Wood). The majority of the film is set before the events of The Lord of the Rings, and The Hobbit: An Unexpected Journey begins as dwarf king Thrór (Jeffrey Thomas) sees an age of prosperity for his people vanish in an instant with the arrival of the dragon Smaug (voiced by Benedict Cumberbatch). Smaug claims much of the Dwarf Kingdom, and Elven King Thranduil (Lee Pace) refuses to provide the dwarves refuge, instilling in Thrór's grandson Thorin (Richard Armitage) an everlasting hate for the elves. Some years later, a young Bilbo (Martin Freeman) is duped into hosting a gathering for Gandalf the Grey (Ian McKellen) and the thirteen dwarves on a quest to reclaim the Lonely Mountain from Smaug. The complacent Bilbo at first refuses to become the company's "burglar" but relents at the last second. Bilbo, Gandalf and the dwarves then begin the harrowing journey to the Lonely Mountain on a road filled with trolls, stone giants and vicious Orcs. 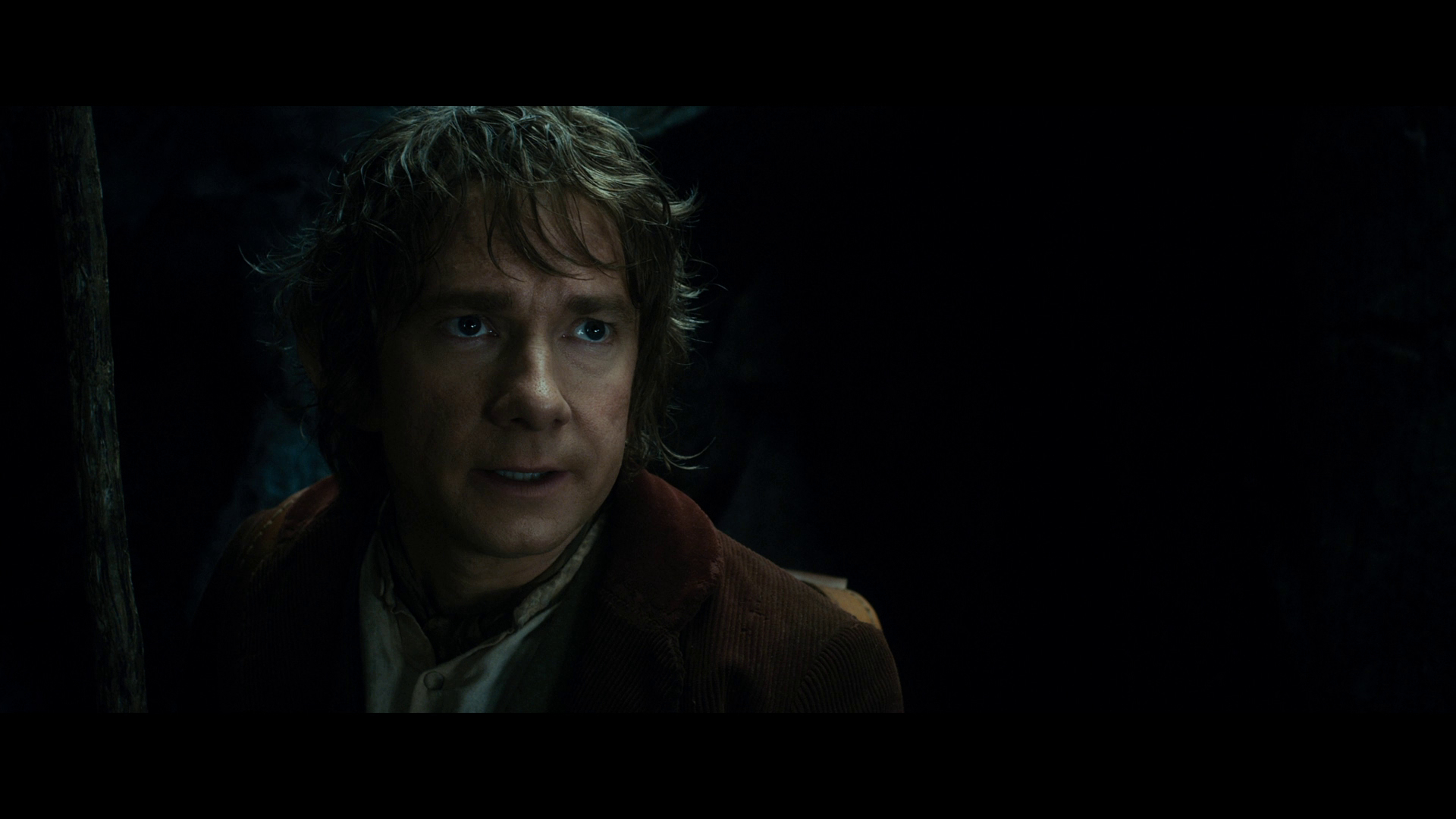 Jackson initially balked at returning to shoot such a massive project after spending the better part of a decade filming his Lord of the Rings Trilogy. Jackson was set to executive produce two del Toro-directed films in 2008, and Warner Brothers bankrolled several years of del Toro's preproduction work before he ultimately left the project to film Pacific Rim. The driving force for his departure was MGM's bankruptcy, which kept The Hobbit films, the last James Bond film, Skyfall, and the Joss Whedon-produced The Cabin in the Woods in limbo for years. The Hobbit was then without a director for several months before Jackson agreed to lead the project and avoid wasting the millions already spent on story and production development. In many ways, Jackson is the only director I can see adapting Tolkien's novel. A del Toro adaptation would have no doubt been interesting, but I recall the excitement I felt after learning this Tolkien property was back in Jackson's most capable hands.

Pre-production difficulties were only compounded by Jackson's near-impossible task of shooting something that lived up to The Lord of the Rings. Tolkien fans have been somewhat rough on The Hobbit, criticizing Jackson's decision to split the story into three films rather than two and bemoaning the characters and story arcs that veer from the written page. An Unexpected Journey does suffer from some of the same pacing issues that plague Jackson's earlier trilogy, and it makes a few dramatic concessions necessitated for the opening film in a trilogy. The decision to shoot the film in hyper-real 48 frames-per-second 3D is off-putting to some, as the stunning clarity makes the undeniably impressive sets look less than authentic. Whether you love or hate the look, it is clear that auteur Jackson has every right to use his massive film to introduce the future of digital filmmaking on a world stage. 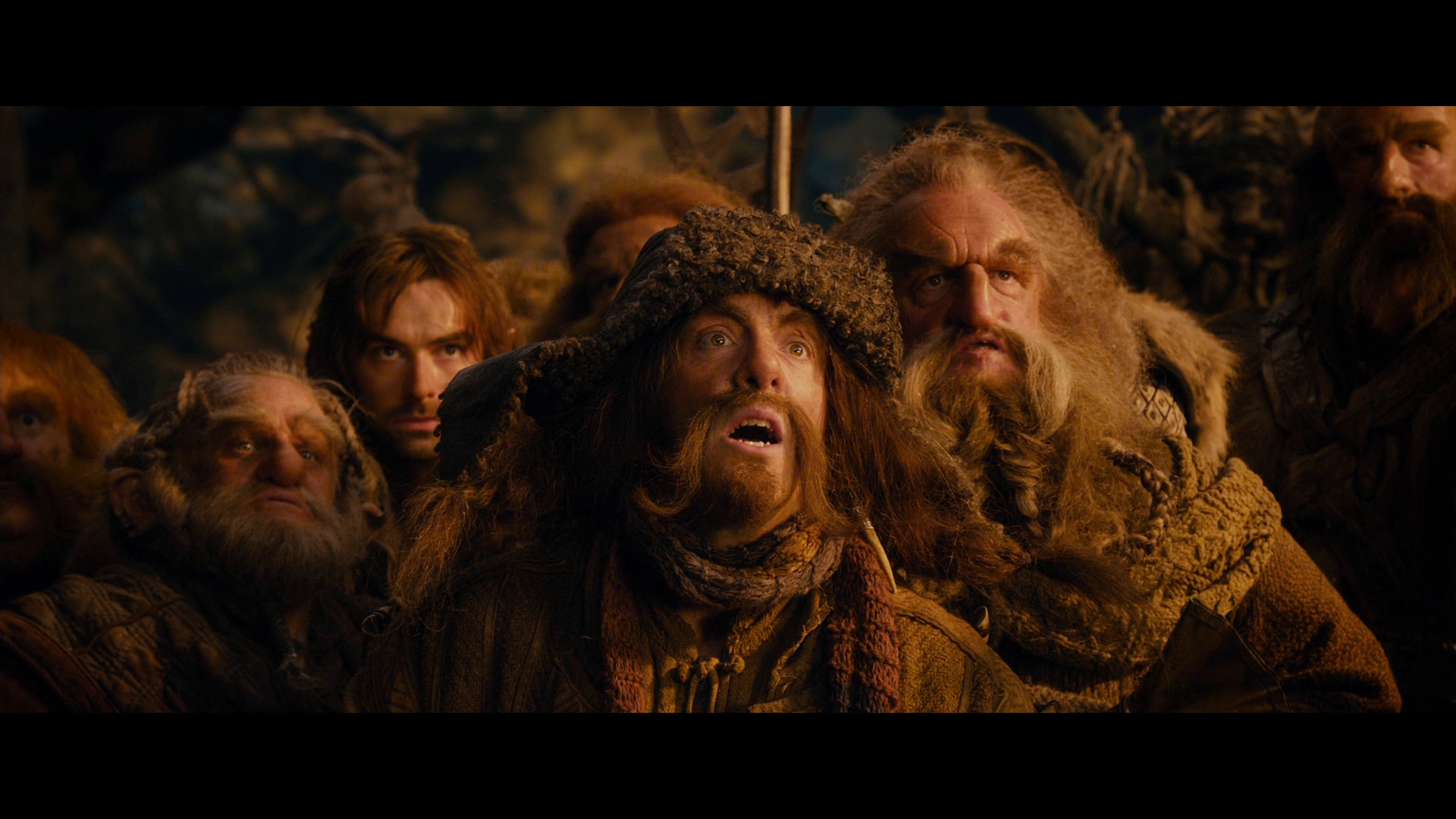 Like The Lord of the Rings, An Unexpected Journey is a road film and adventure on the grandest scale. The company of dwarves is well traveled, battle hardened, and overwhelming to Bilbo, who longs for the comfort of his hobbit hole. Gandalf insists Bilbo is the right man to join the quest, though Thorin is understandingly skeptical about a stranger being introduced on his intensely personal journey. A decade after the conclusion of The Lord of the Rings saga, the special effects and production design of The Hobbit only expands on the cutting-edge digital wizardry from the earlier adventures. The majority of Jackson's production team returns here, including longtime producing partner Fran Walsh and cinematographer Andrew Lesnie. Actors Wood, Cate Blanchett, Hugo Weaving and Andy Serkis also return, bringing the The Hobbit squarely into the Lord of the Rings universe.

The audience response to The Hobbit was positive but not as rapturous as for The Lord of the Rings. Some viewers are not fond of The Hobbit's frequent humor and lighthearted adventure mishaps, but these mirror Tolkien's novel. Jackson promised to dispel criticisms of making this a trilogy with this first film, and, for the most part, he succeeds. The story never feels unnecessarily elongated, though the pacing slows a bit in the film's midsection before picking up again for the action-packed climax. An Unexpected Journey is a wonderful start to a promising trilogy, and I expect Jackson's two remaining films will be even more satisfying. Minor pacing issues aside, The Hobbit: An Unexpected Journey returns viewers to the Lord of the Rings universe in grand style. 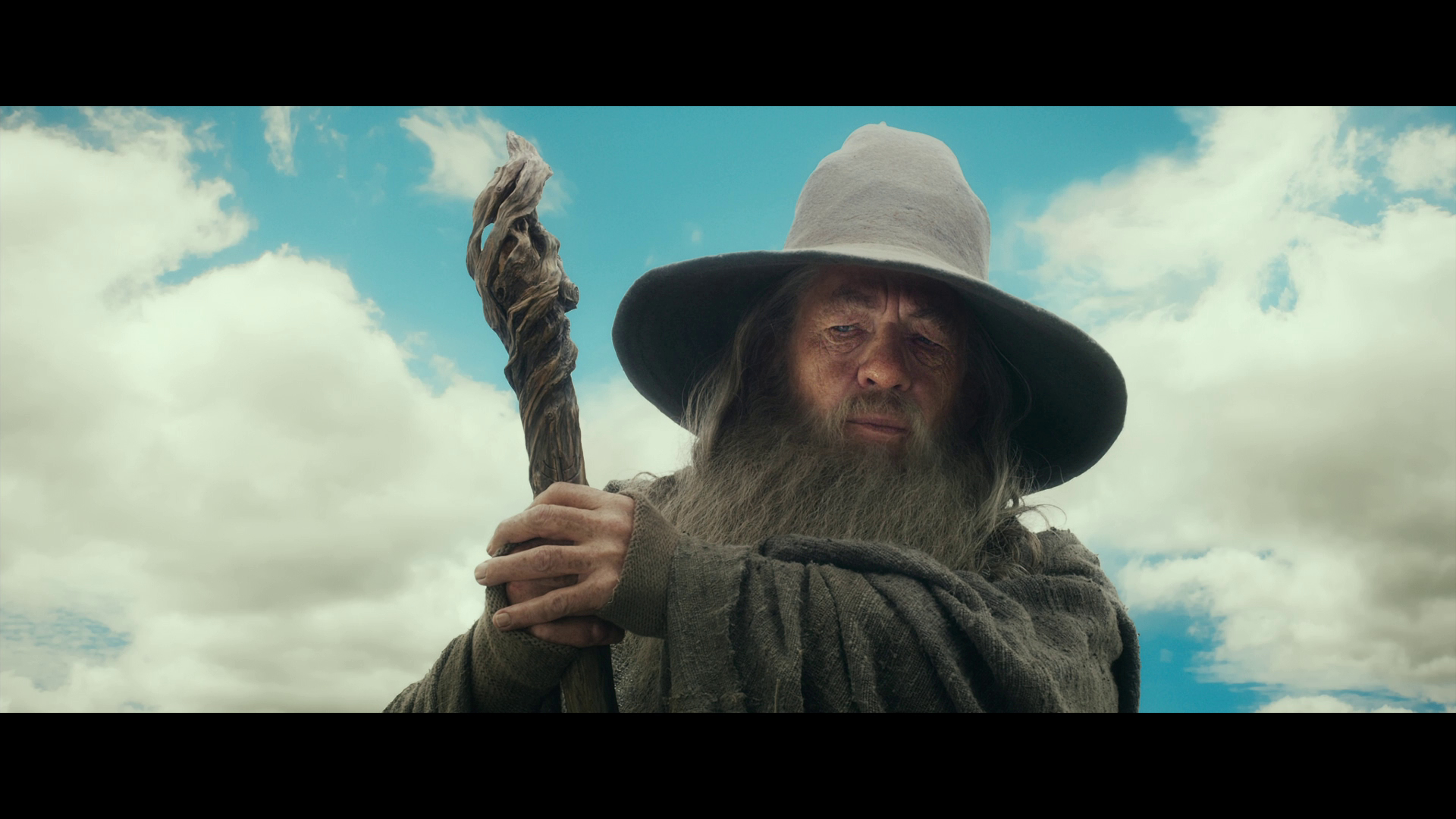 I was somewhat concerned that a single Blu-ray disc was not capable of flawlessly presenting this 182-minute film, but any fears were dispelled the minute the film began to unspool. The 2.40:1/1080p/AVC-encoded transfer is fantastic, and brings An Unexpected Journey to life in flawless high-definition glory. Jackson's intended look is faithfully re-created with a presentation full of intimate detail and complex textures. From the opening greens of the Shire to the cold greys of the Misty Mountains to the rainbow sky above the Lonely Mountain, colors are vibrant and perfectly saturated. Fine object detail, from the fabric of Gandalf's robe to the wrinkles on pitiful Gollum's face, is startlingly clear, and backgrounds stretch for miles. I expected to find at least traces of compression noise or aliasing in these wide shots, but found absolutely nothing to deter from the beautiful landscapes of Middle-Earth. Black levels are strong, particularly given the digital source, and the caverns of Gollum's cave are impressive in detail even when cloaked in heavy shadows. This Blu-ray provides a highly filmic presentation of An Unexpected Journey and the detail, clarity and texture on display are among the best on the Blu-ray format. While a 48 frames-per-second release is not yet available, a 3D Blu-ray release is available separately that splits the film across two Blu-ray 3D discs. 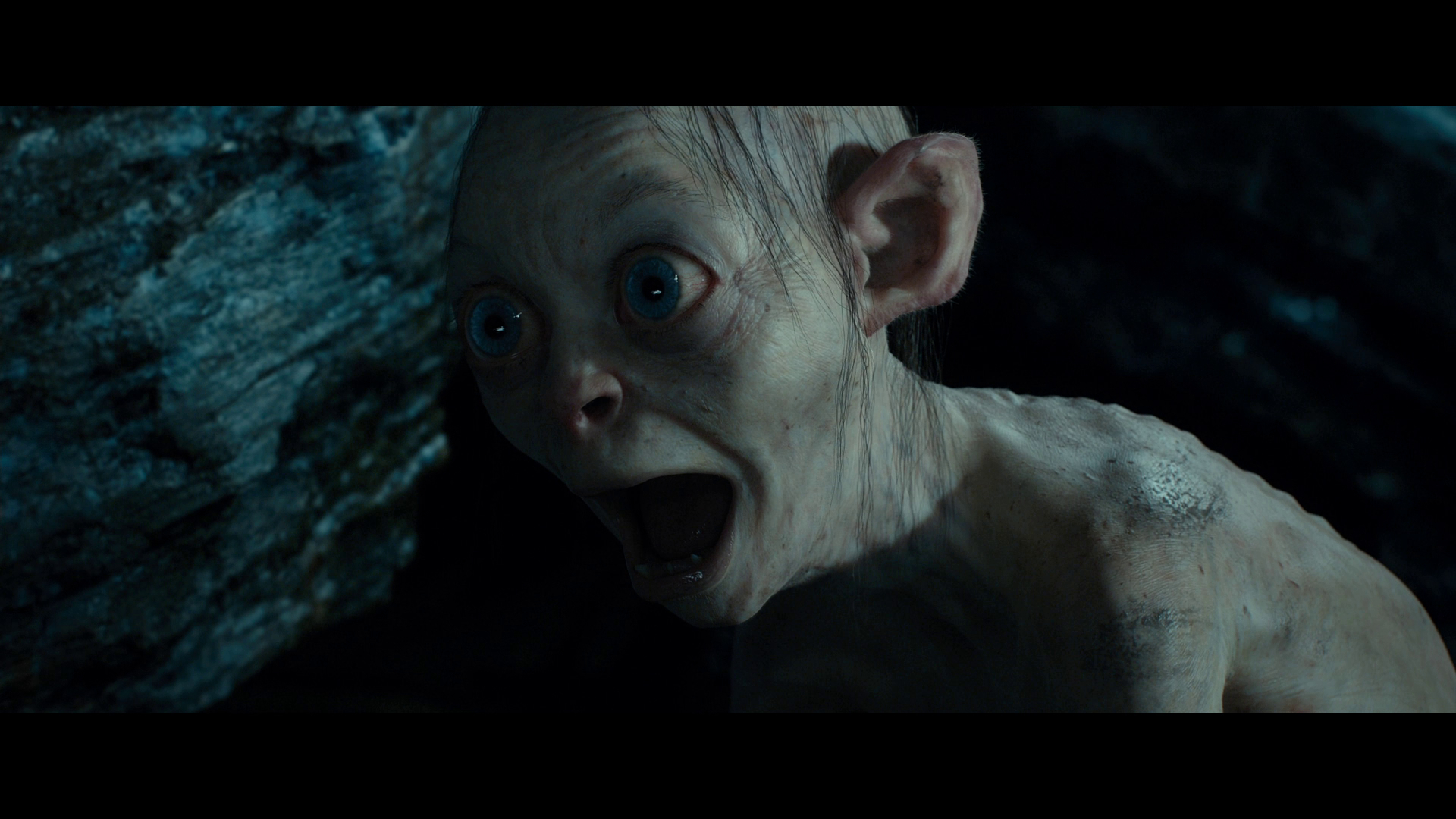 The theatrical edition of The Hobbit: An Unexpected Journey was released on Blu-ray in March but fans knew a fully loaded special edition with Peter Jackson's director's cut was forthcoming. This three-disc Extended Edition includes a 182-minute cut of the film, which adds roughly thirteen minutes to the 169-minute theatrical cut. Although the additions are not as extensive as the added material in the extended versions of the Lord of the Rings films (likely due to Jackson's decision to expand the Hobbit story to three films), this extended cut is the version I will revisit in the future.

Among the additions to this version are an extended prologue about the dwarves and elves and a scene where young Bilbo Baggins first meets Gandalf. There are several extensions to scenes introducing the dwarf clan, and, most controversially, a new scene where the Goblin King sings a song. This sequence isn't strictly necessary, but it doesn't feel particularly intrusive in the scheme of things. Some of these scenes flesh out the film's weaker story developments, while some are simply enjoyable insertions. If you liked the theatrical version then I expect you'll enjoy this extended cut. If you didn't enjoy the previous version, this extended cut isn't going to change your mind.

This three-disc set arrives in style from Warner Brothers. The discs are packed in a black, hinged Blu-ray case that matches the Blu-ray cases inside the Lord of the Rings Extended Blu-ray Collection. Warners forgoes its usual, boring black disc art and instead provides full-color artwork to match the older trilogy. The Blu-ray case slips inside a nice slipbox with artwork befitting the fantasy film. Also included is a code to redeem an UltraViolet digital copy of the extended cut. Fans have waited nearly a year to dive into the extensive bonus features presented here, and should be pleased with the nine hours of added content. Continuing the tradition of the Lord of the Rings bonus material, the set includes two Blu-ray bonus discs that present The Appendices Parts 7 and 8 in full high definition. 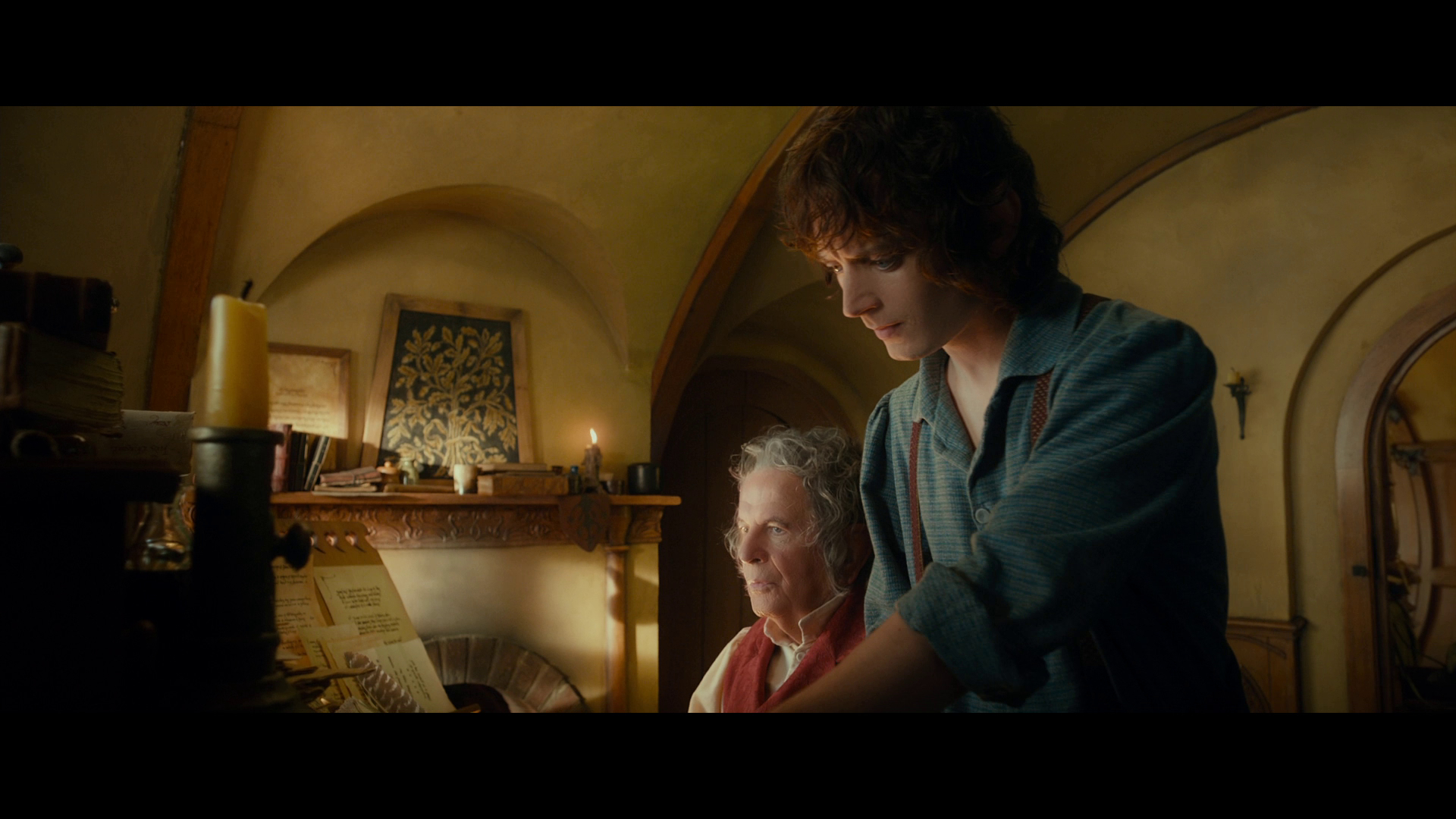 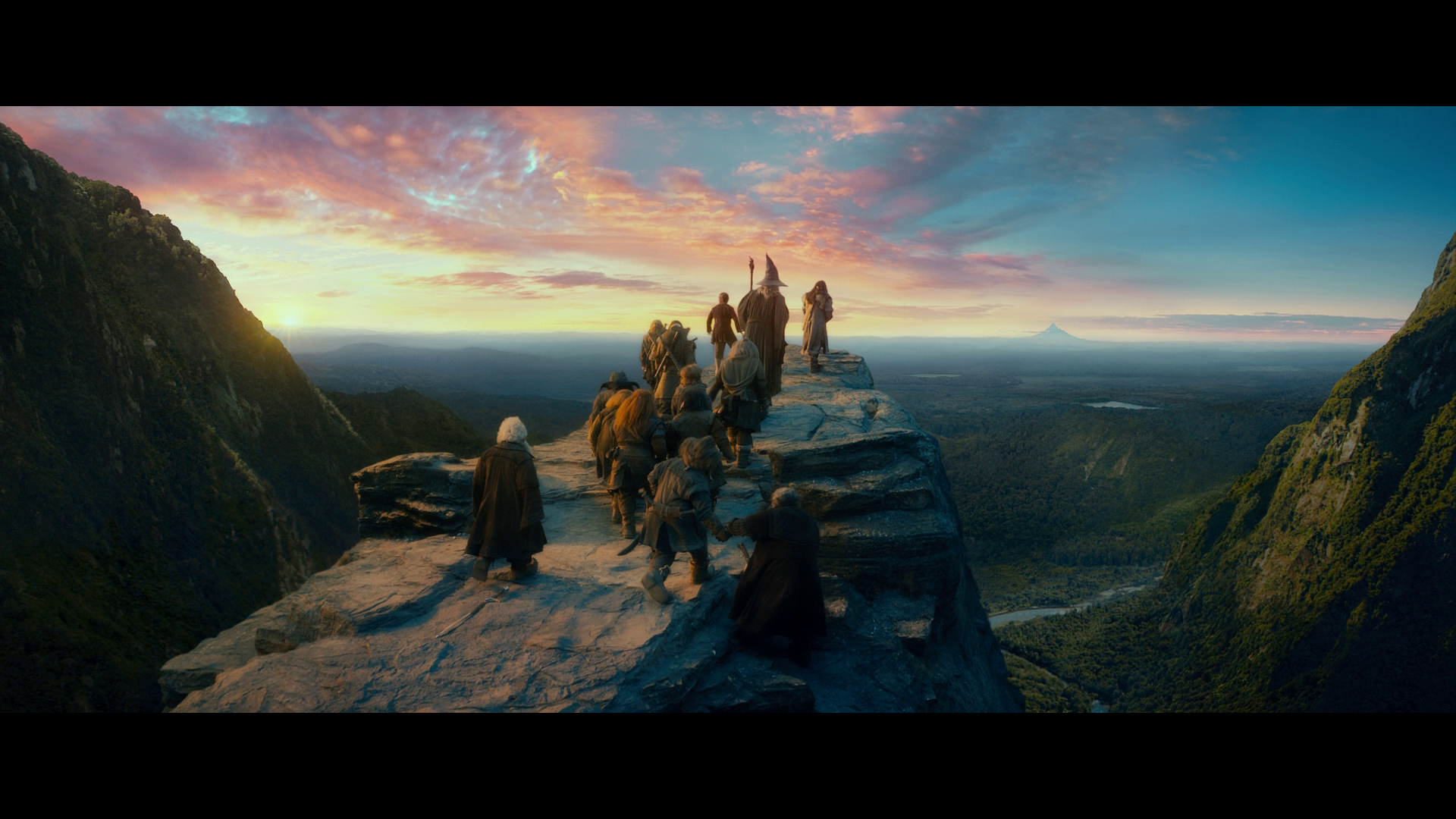 This definitive Blu-ray release for The Hobbit: An Unexpected Journey easily earns my highest recommendation: DVD Talk Collector Series. The film, presented here with thirteen minutes of additional footage, is a largely rapturous adventure that sees director Peter Jackson take the reins of another Middle-Earth adventure. The Extended Cut additions are relatively minor, but this is the version I will be revisiting in the future. Jackson's production design is top notch, and An Unexpected Journey is a wholly entertaining ride despite a few minor pacing issues. This three-disc Blu-ray set is near perfect, presenting the film with stunning picture and audio quality and accompanied by over nine hours of worthwhile extra features. This is a must own for fans and causal viewers alike. 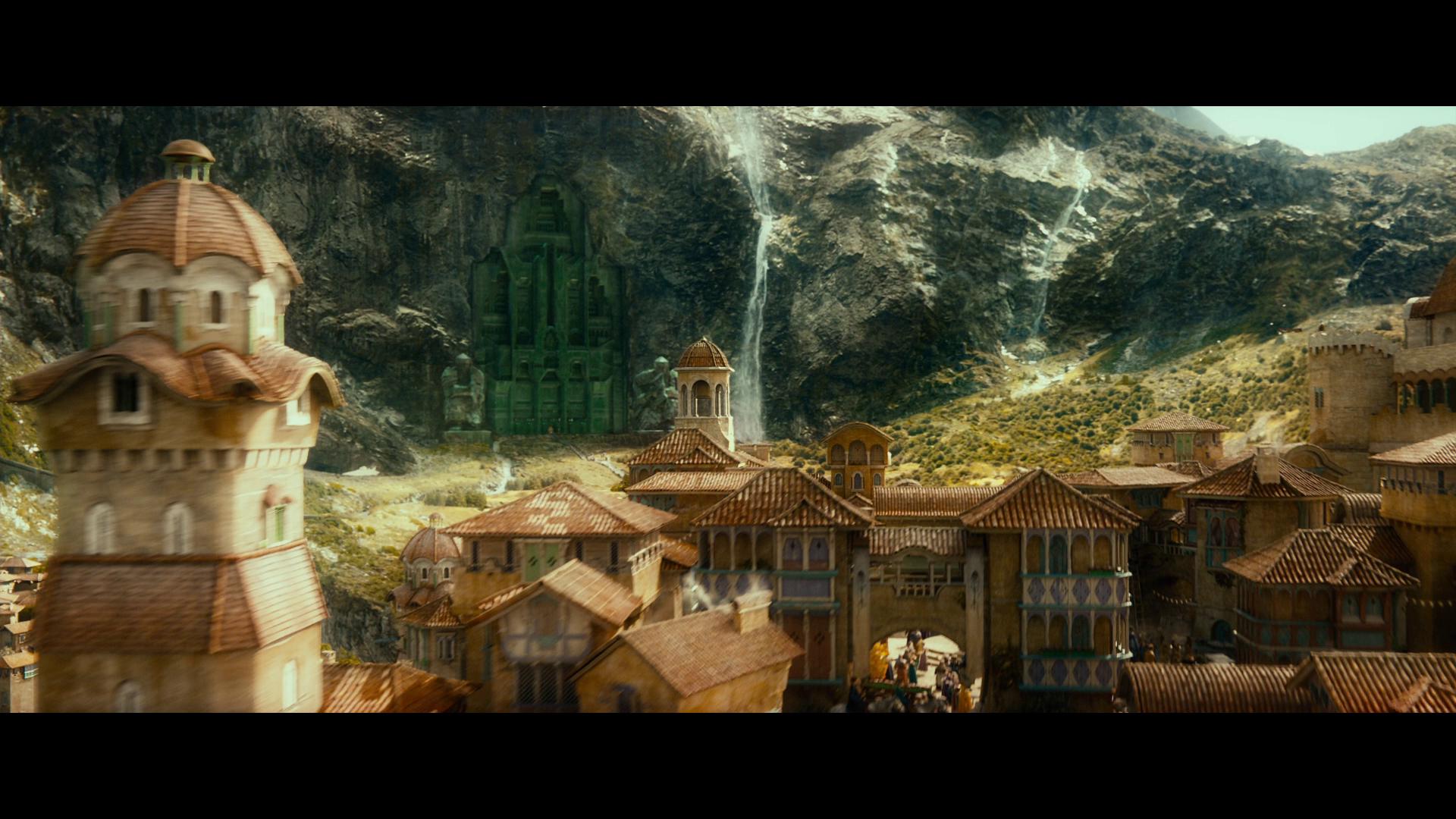 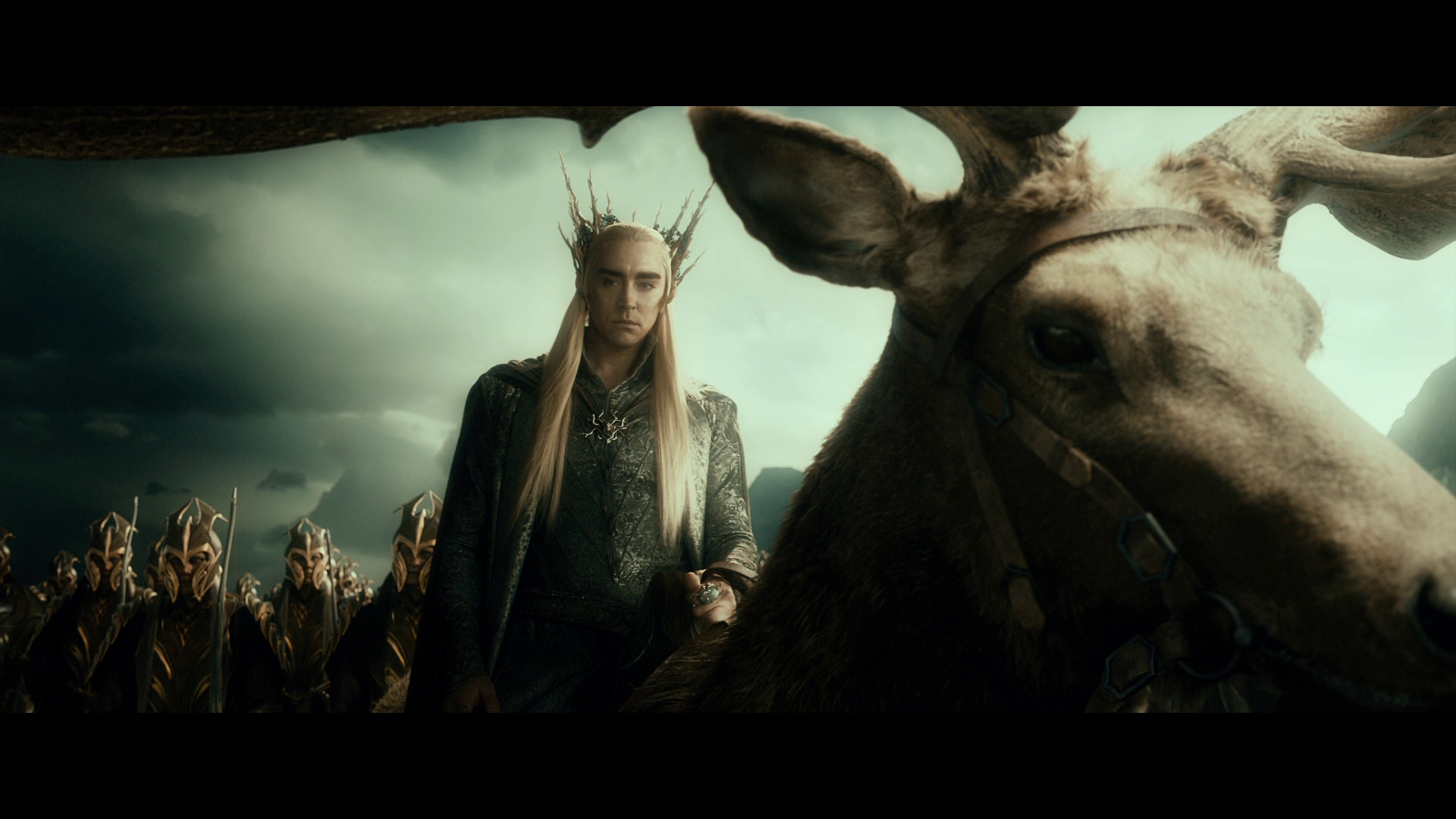 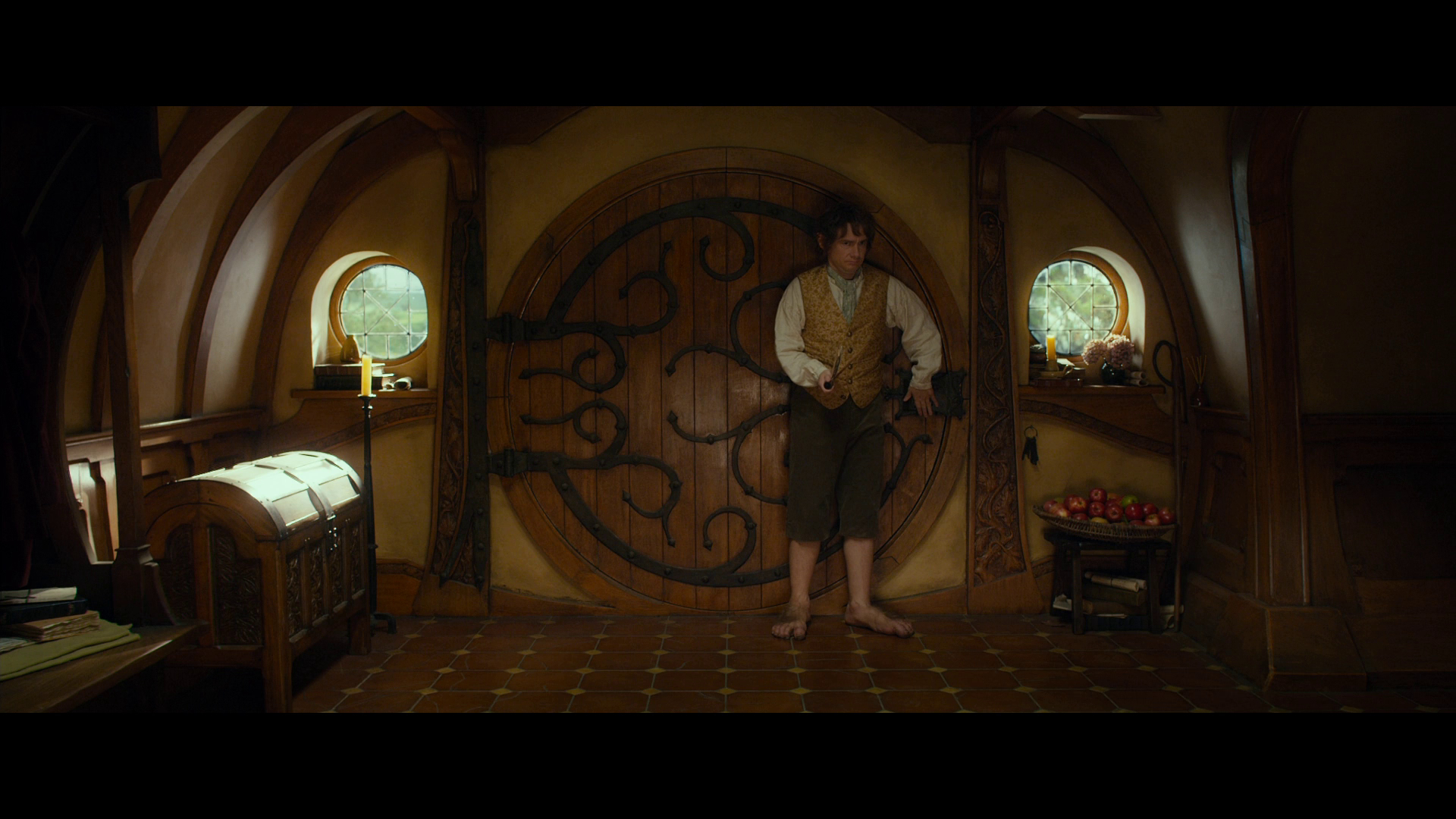 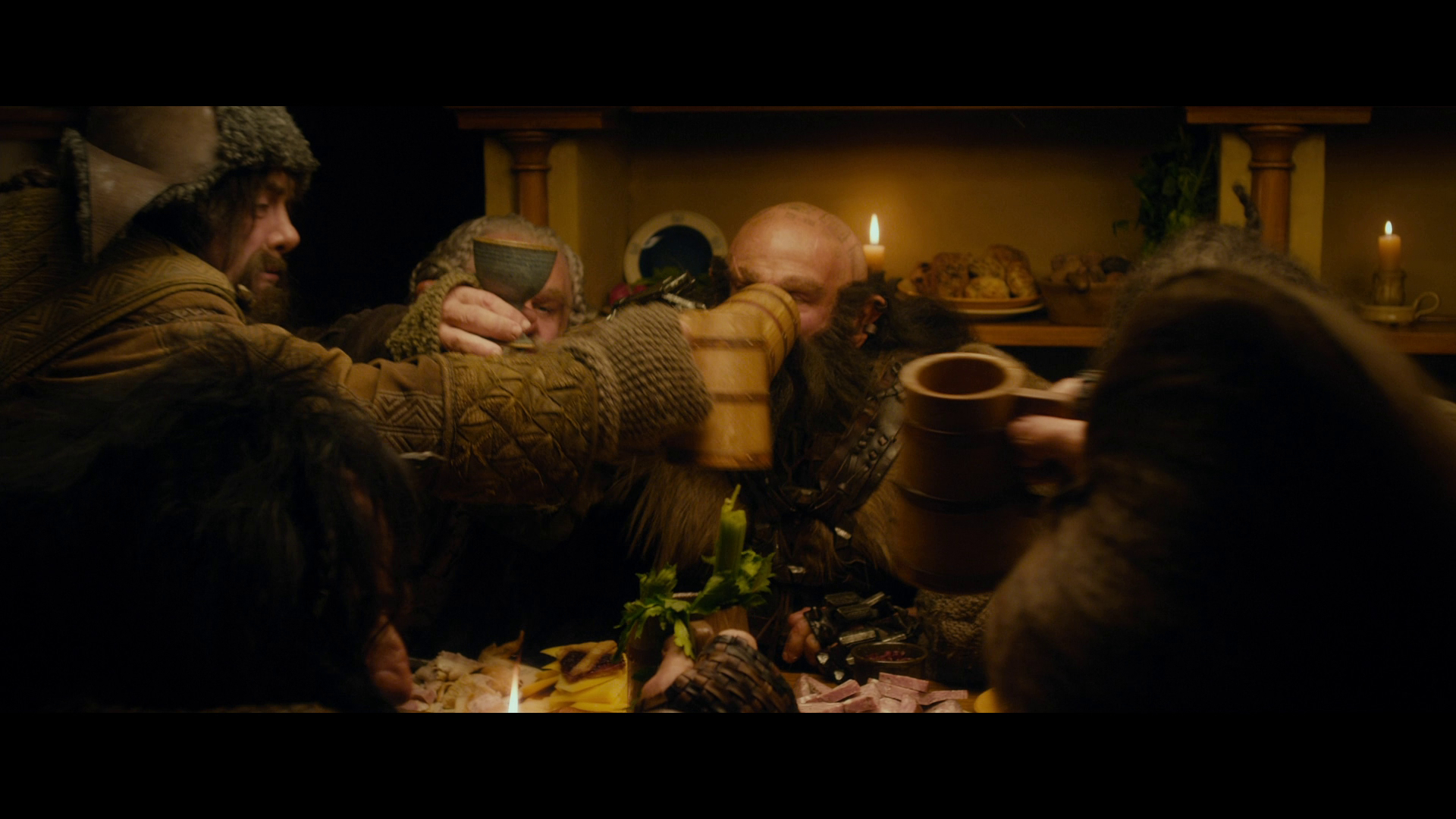 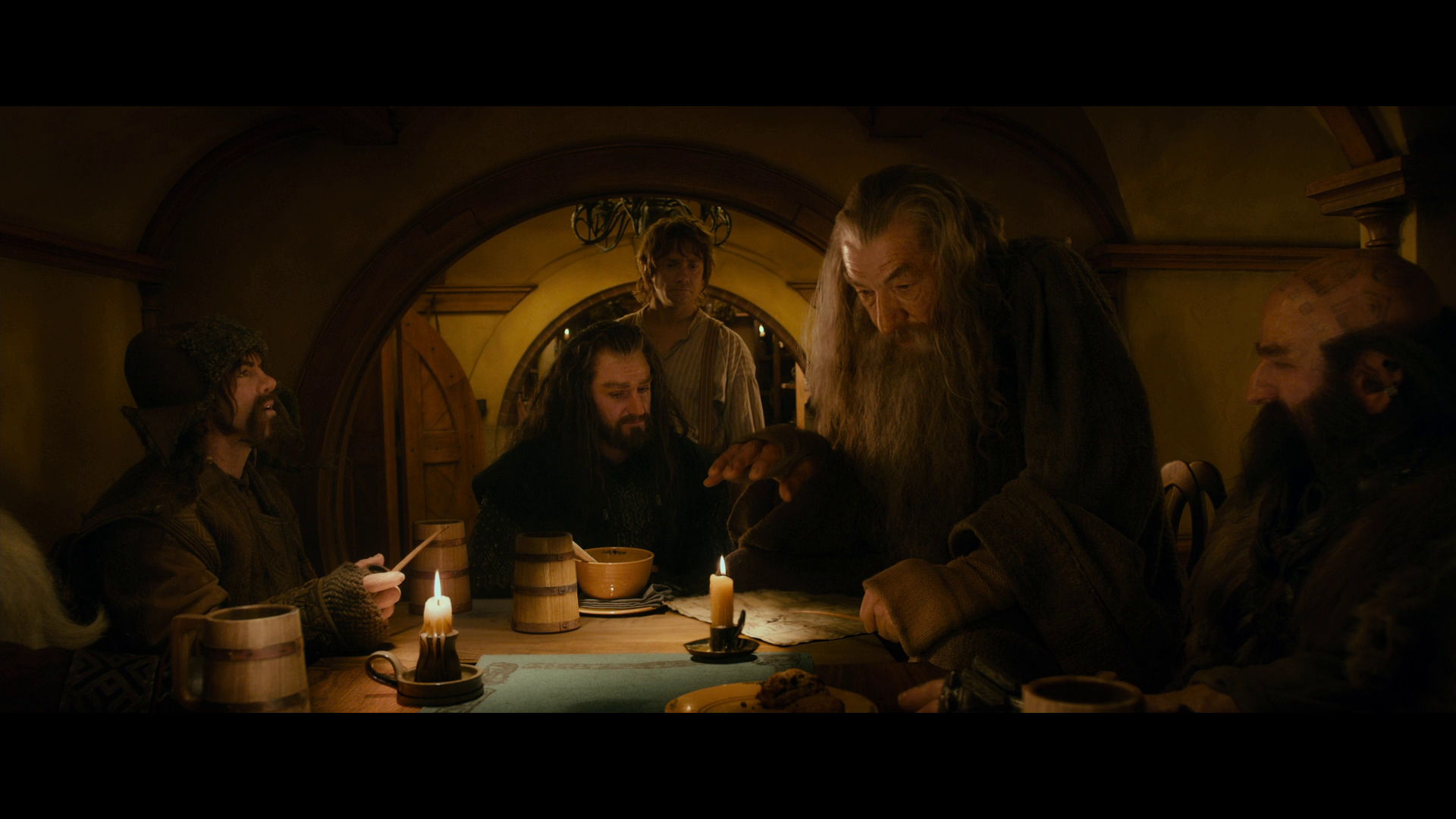 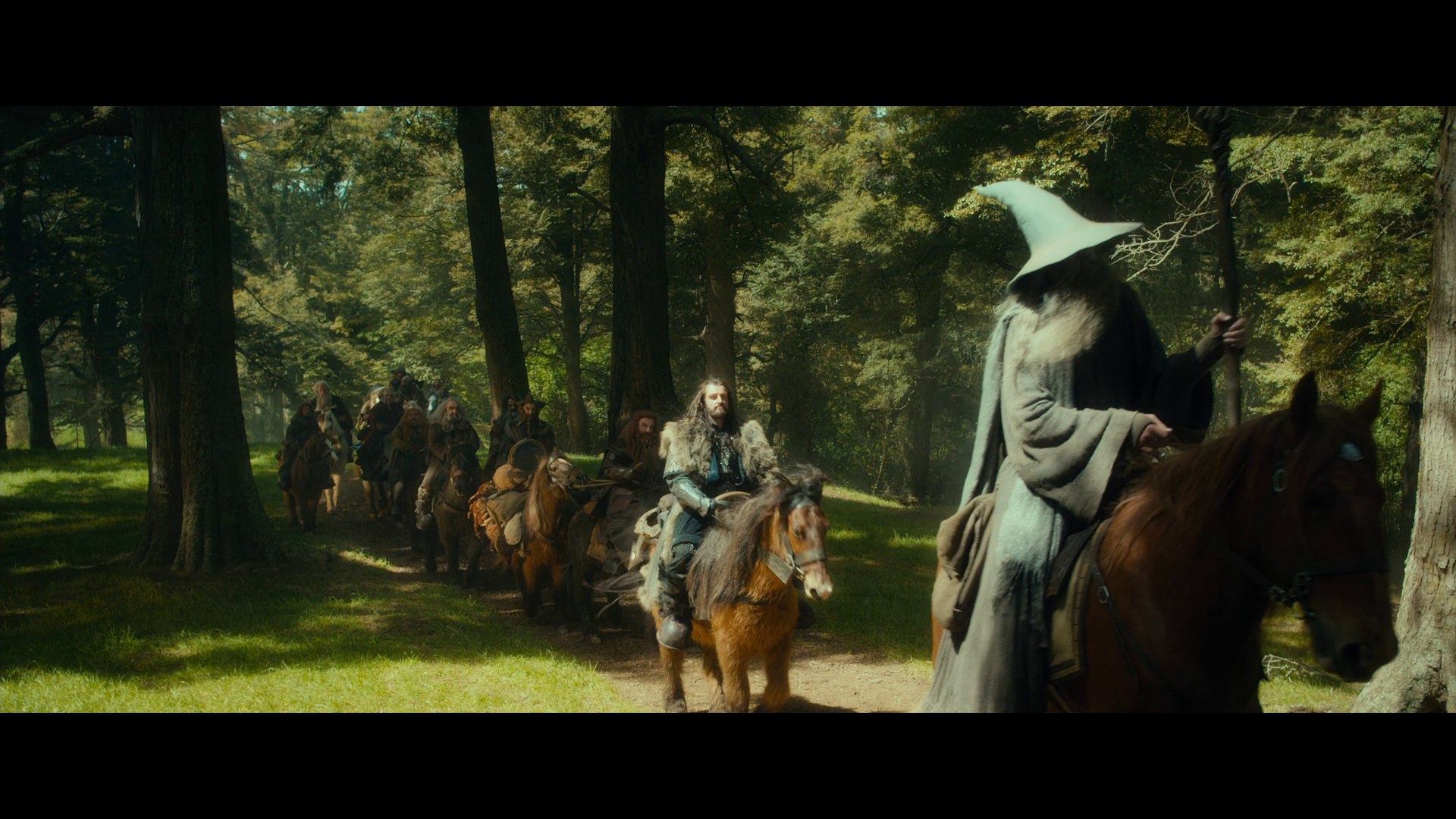 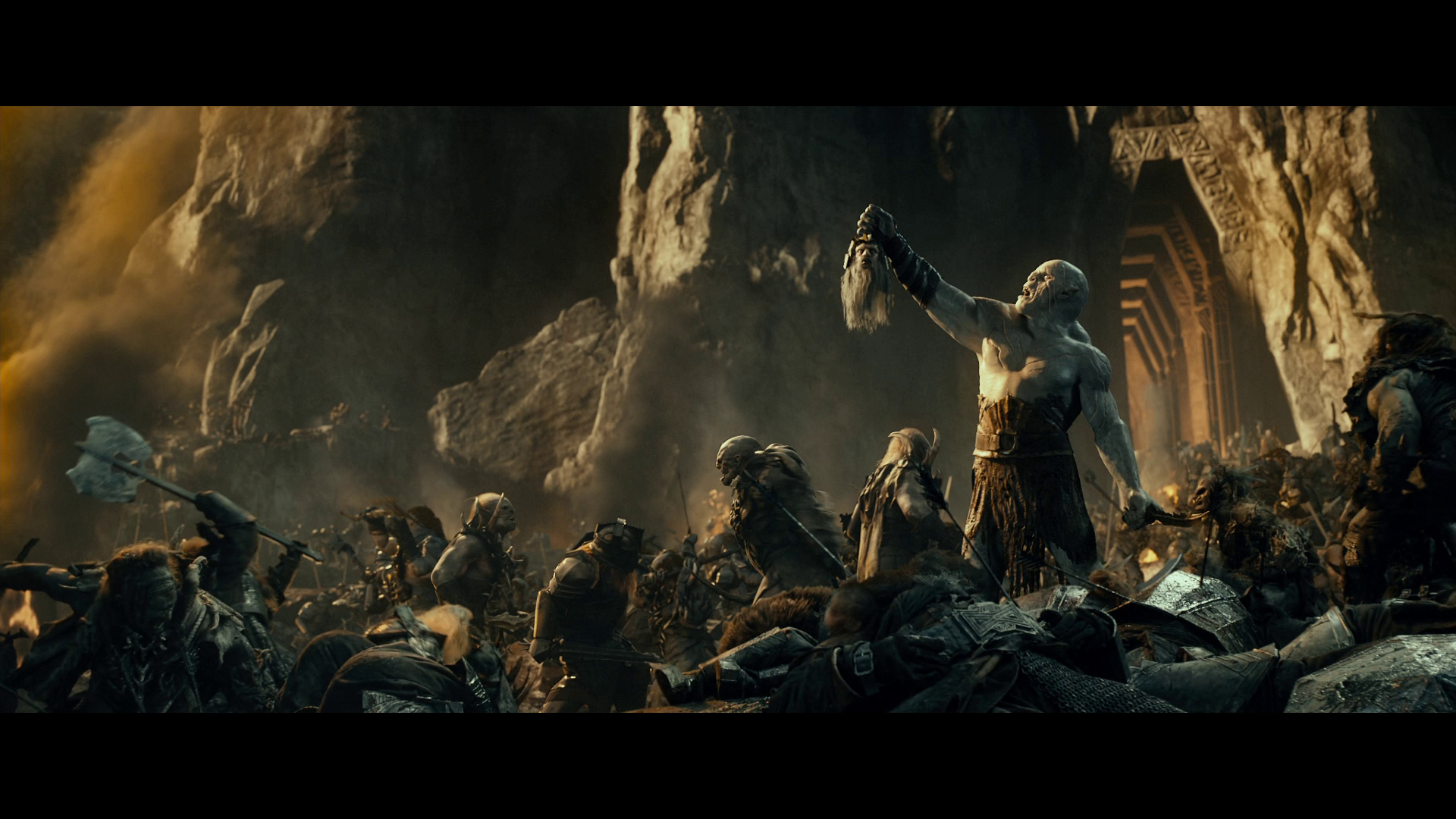 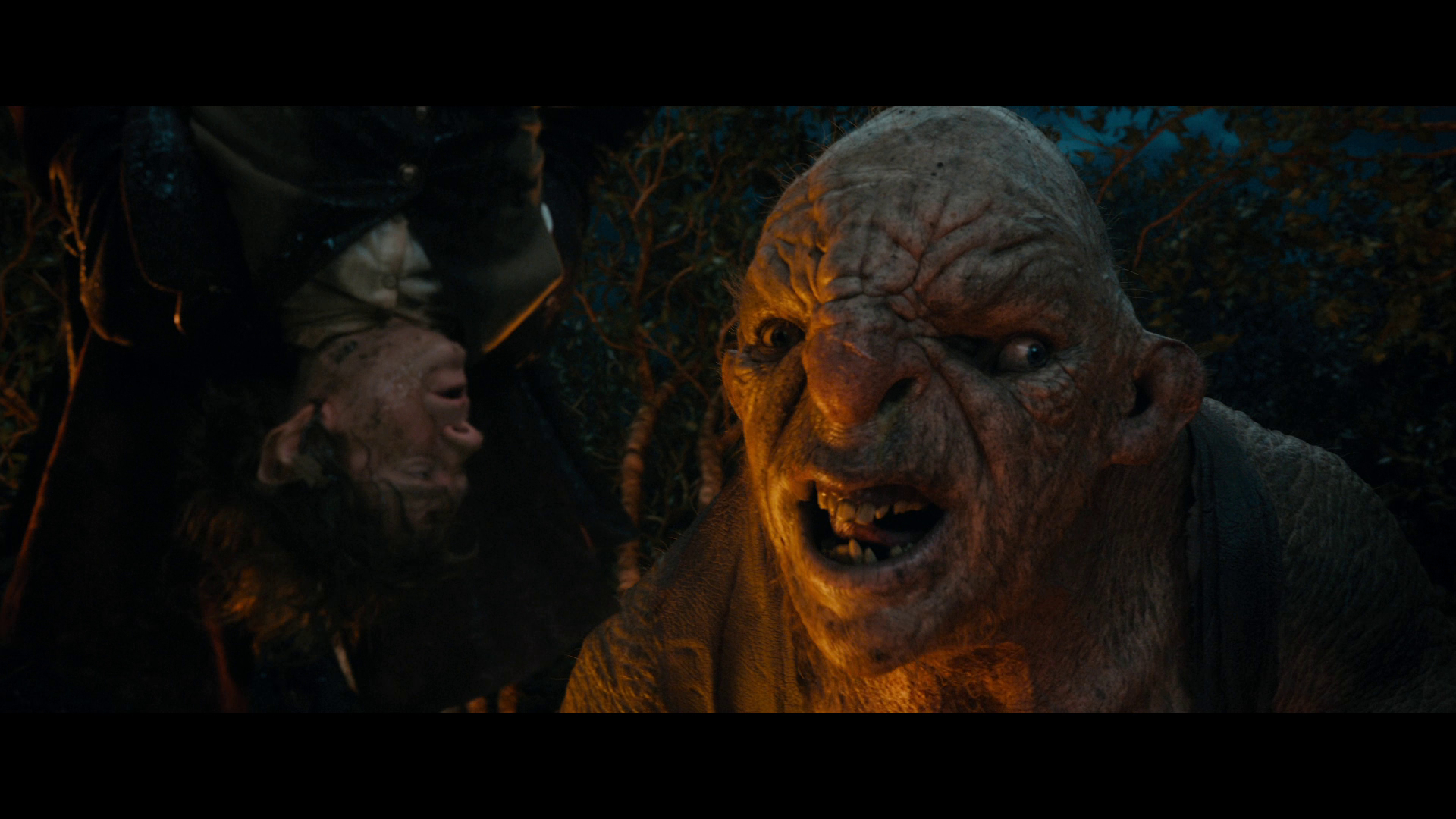 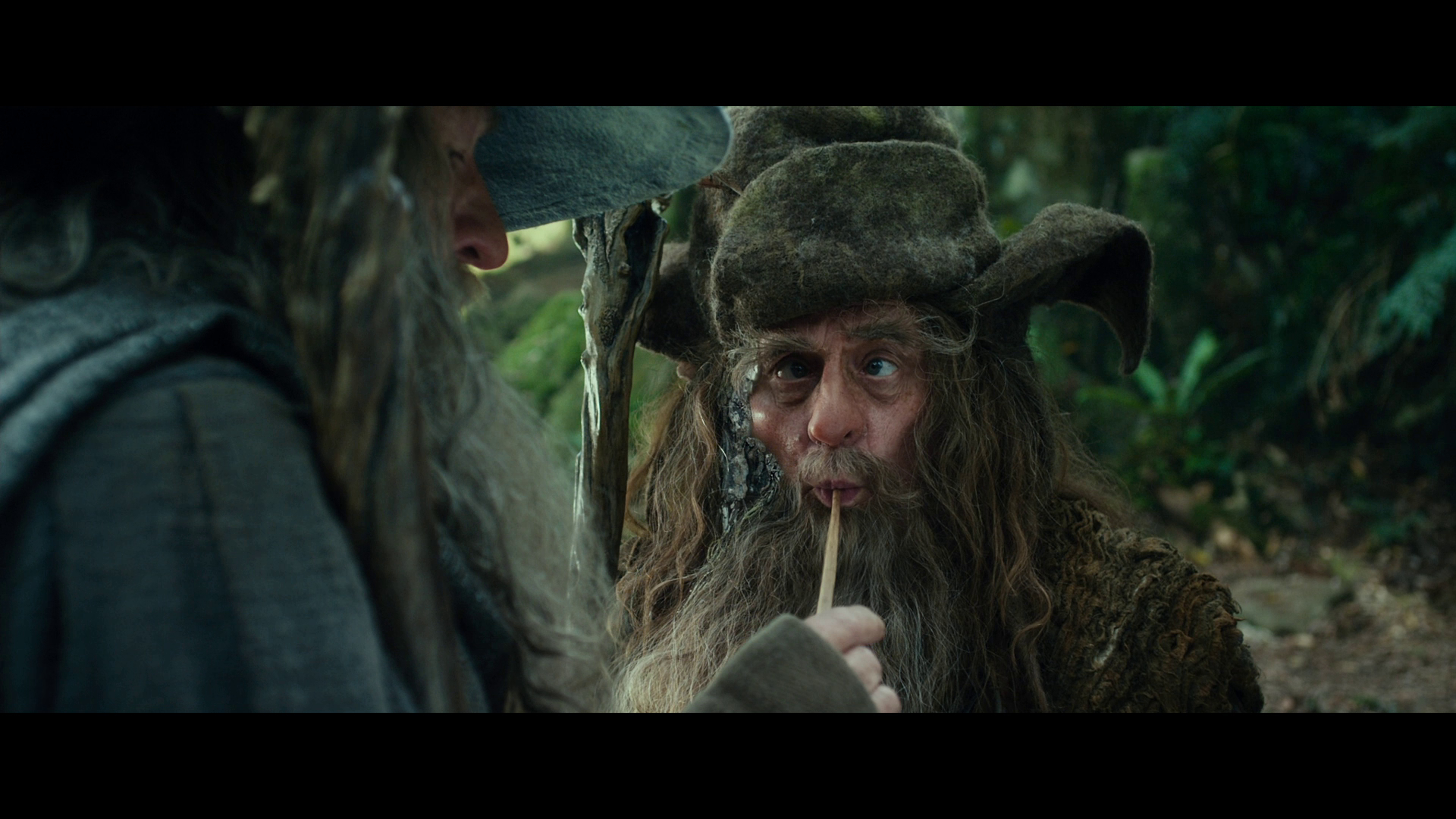 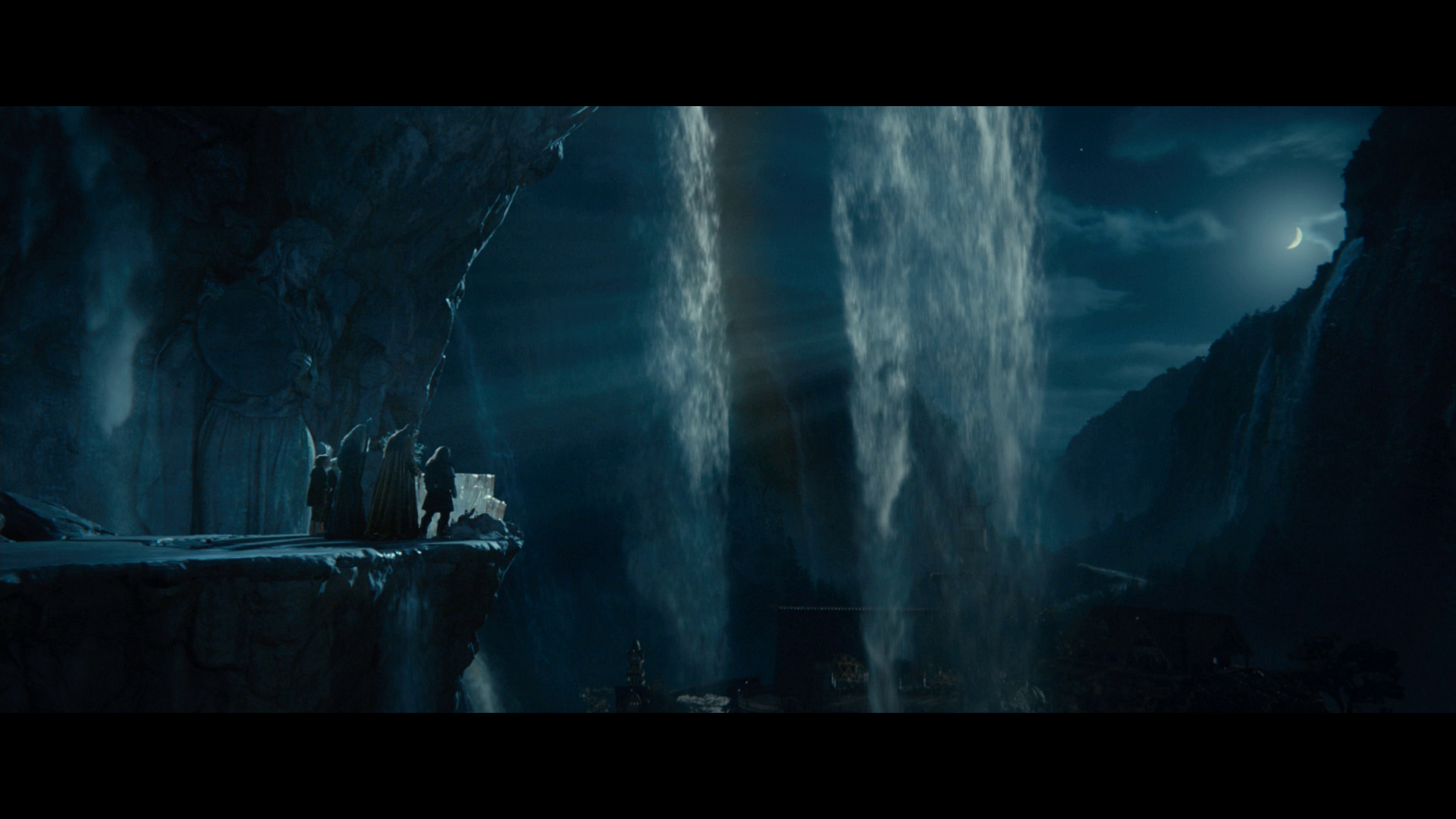 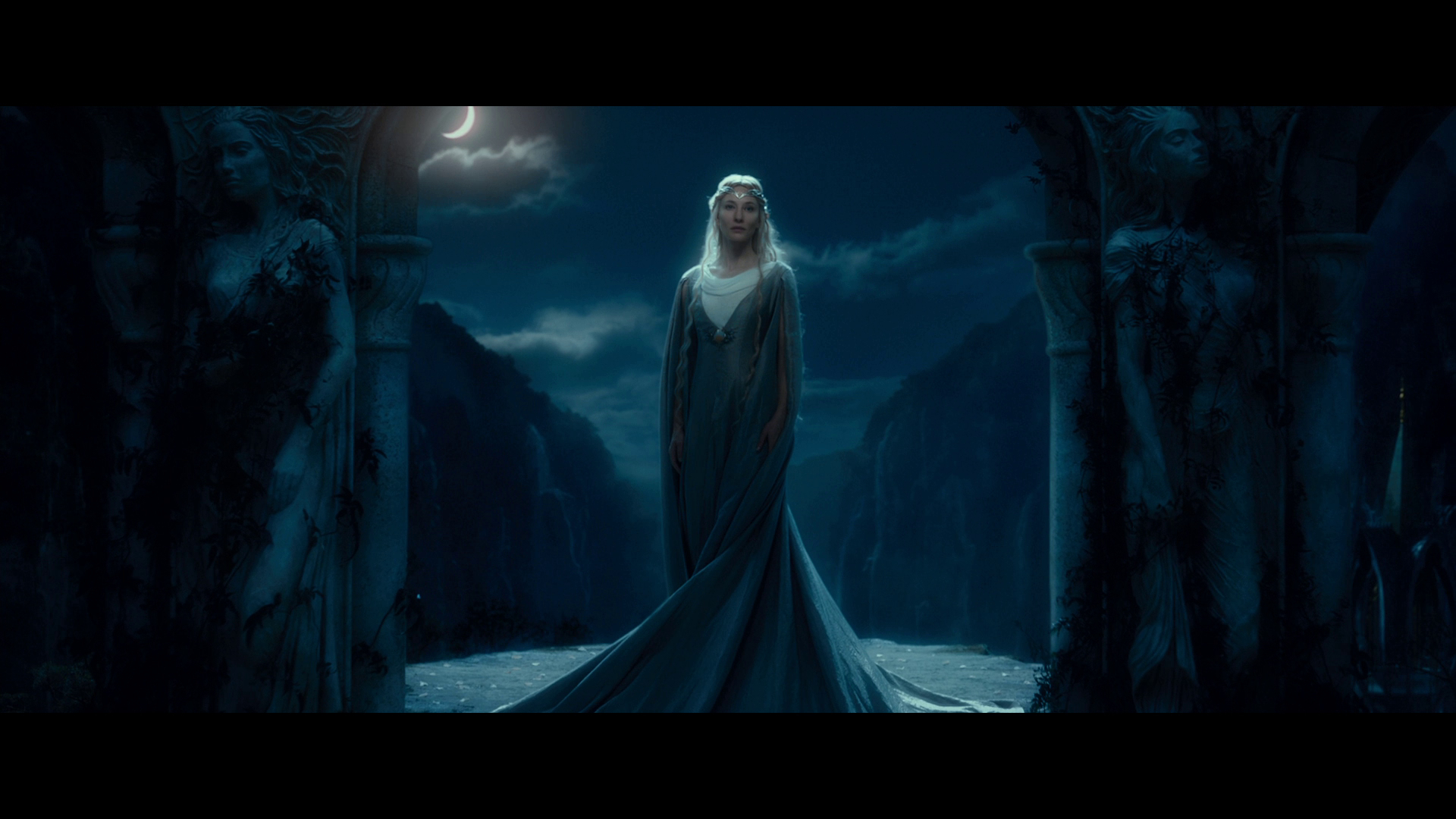 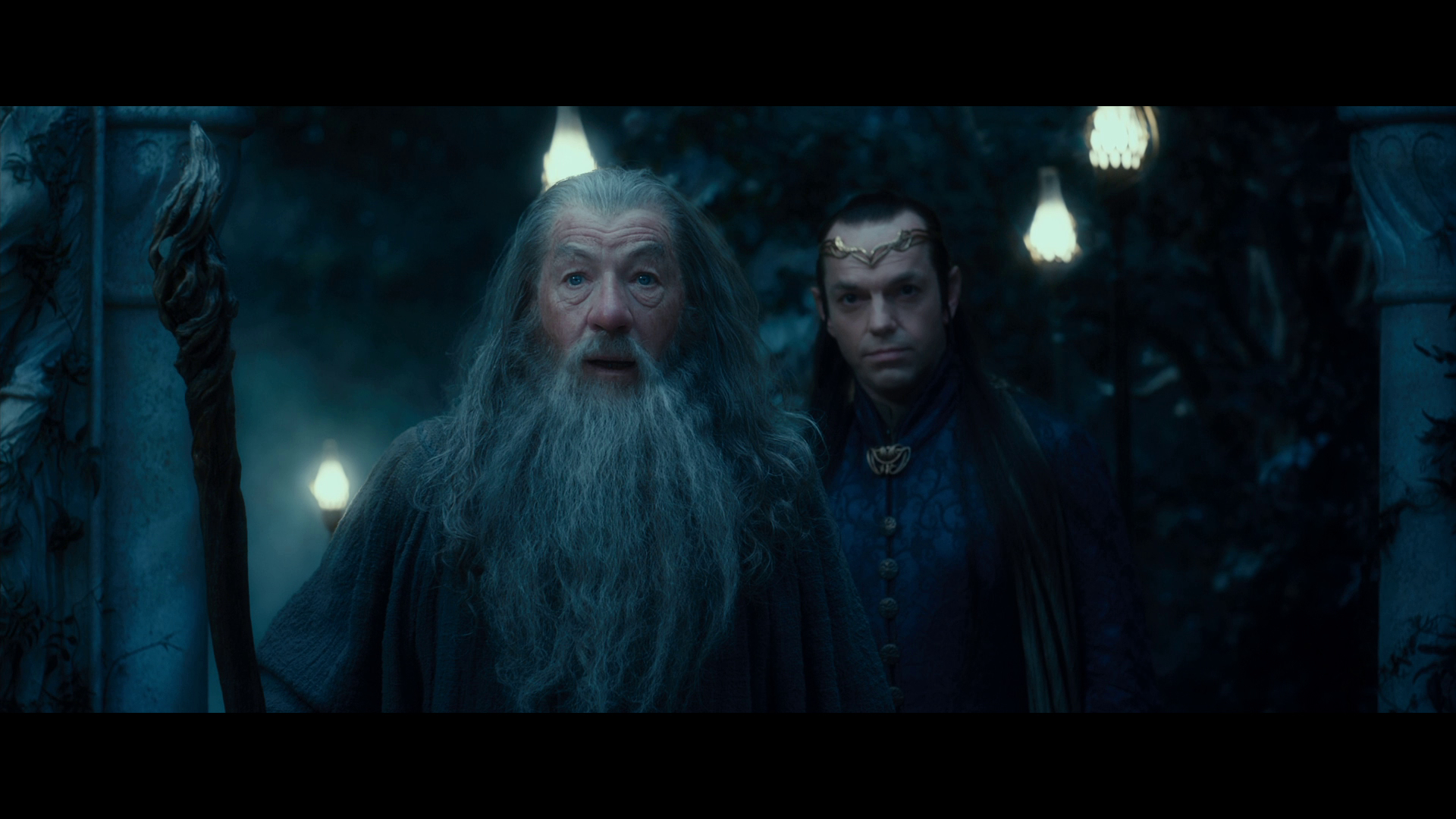 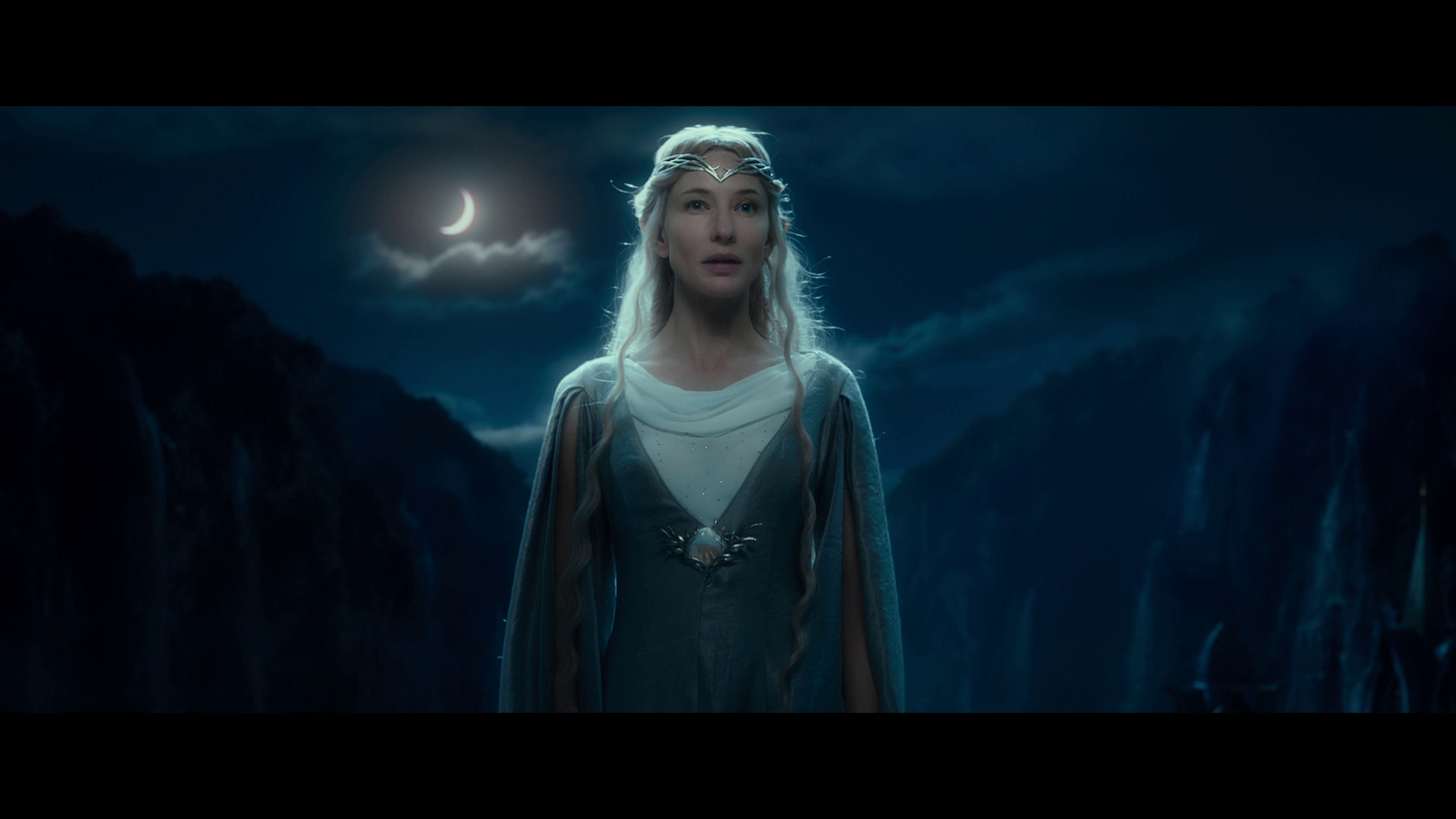 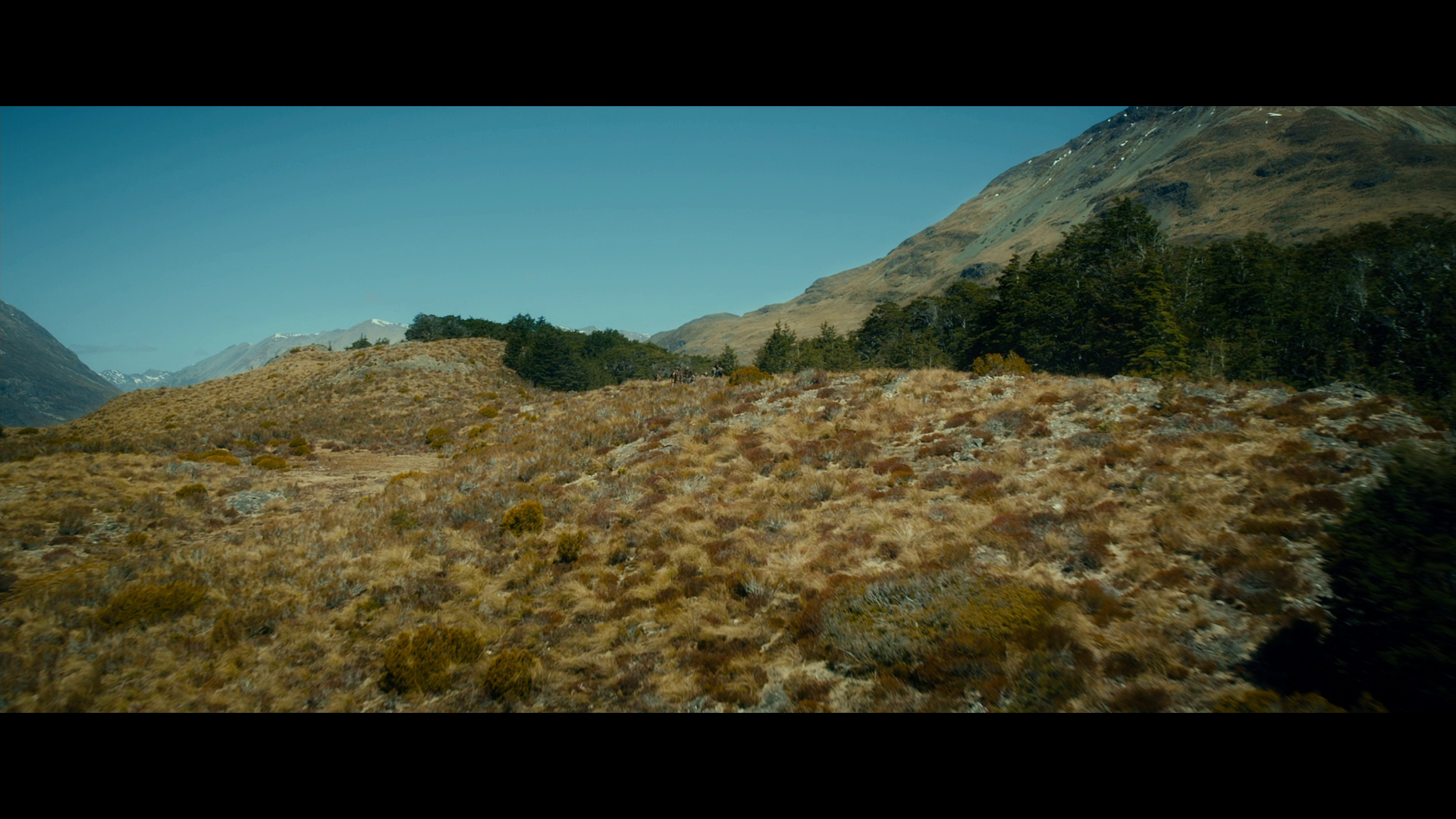 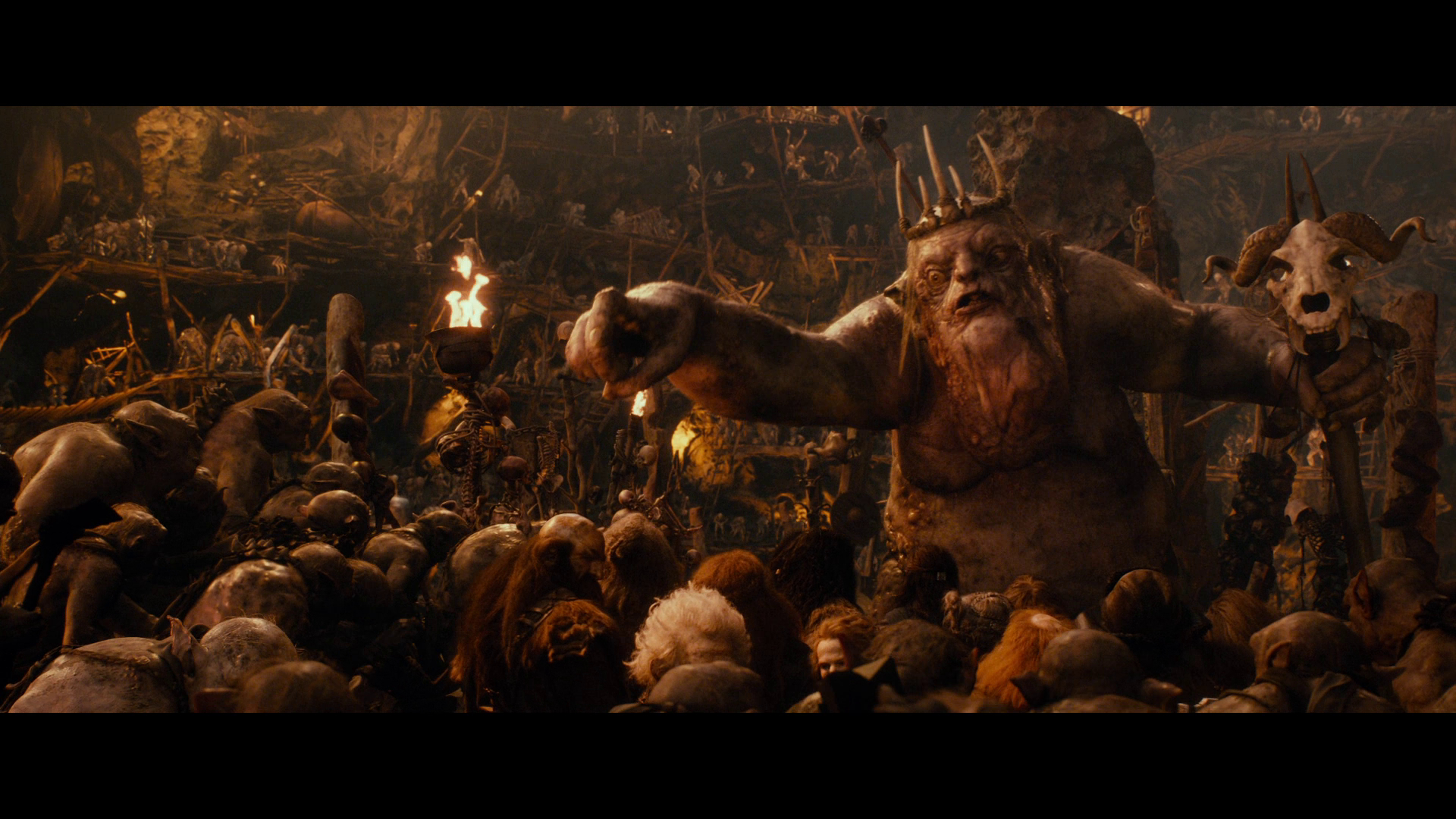 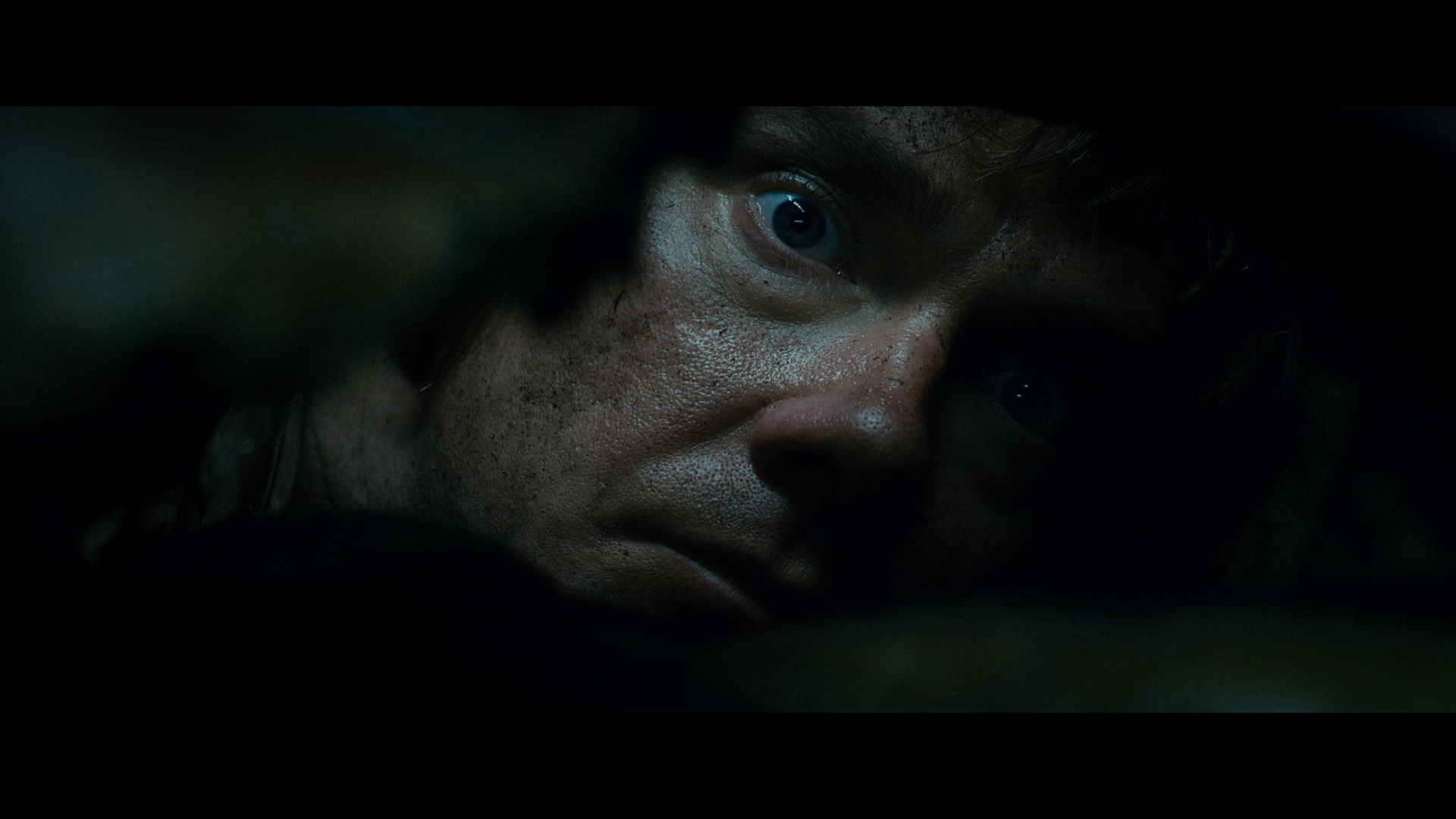 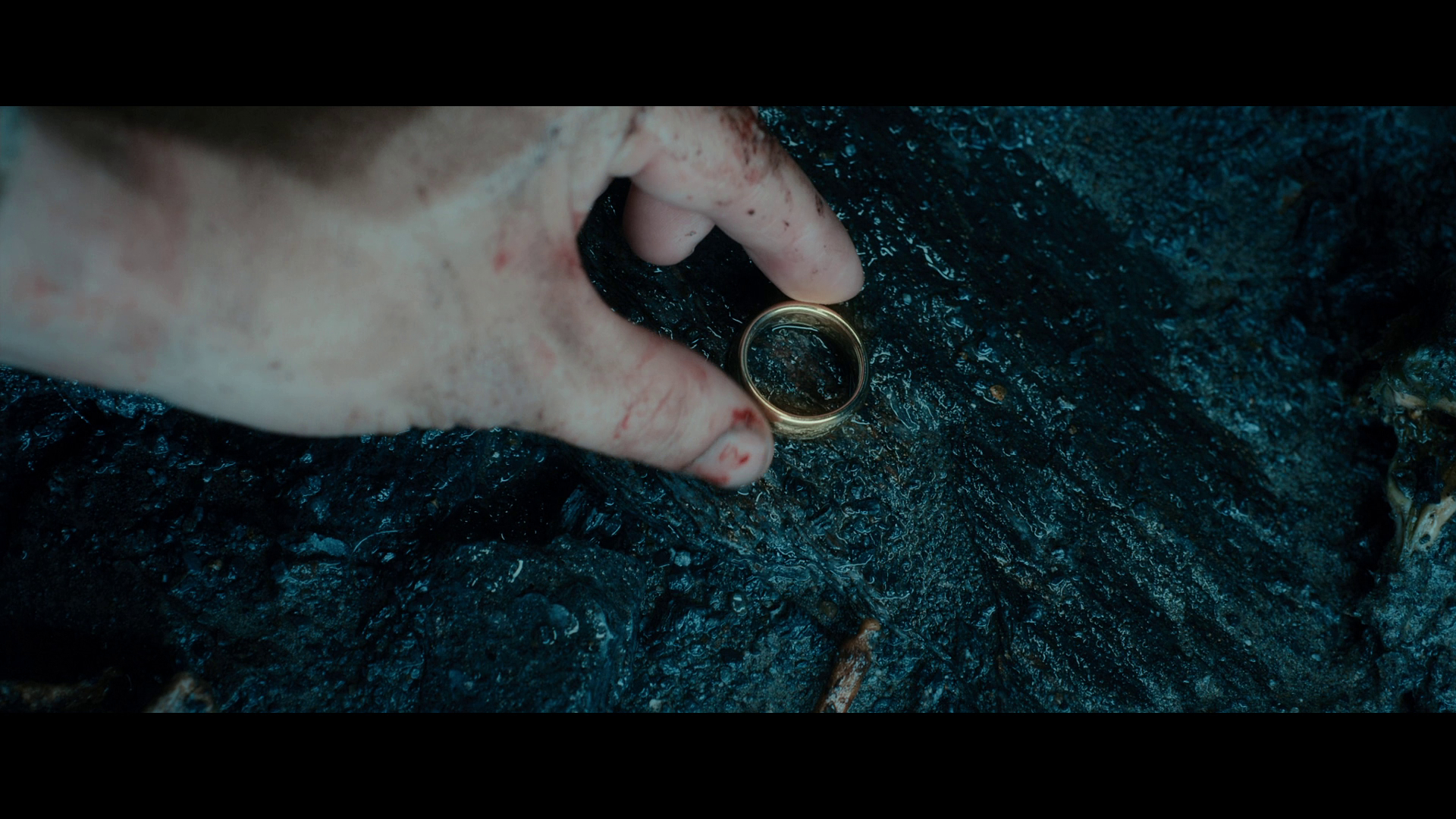 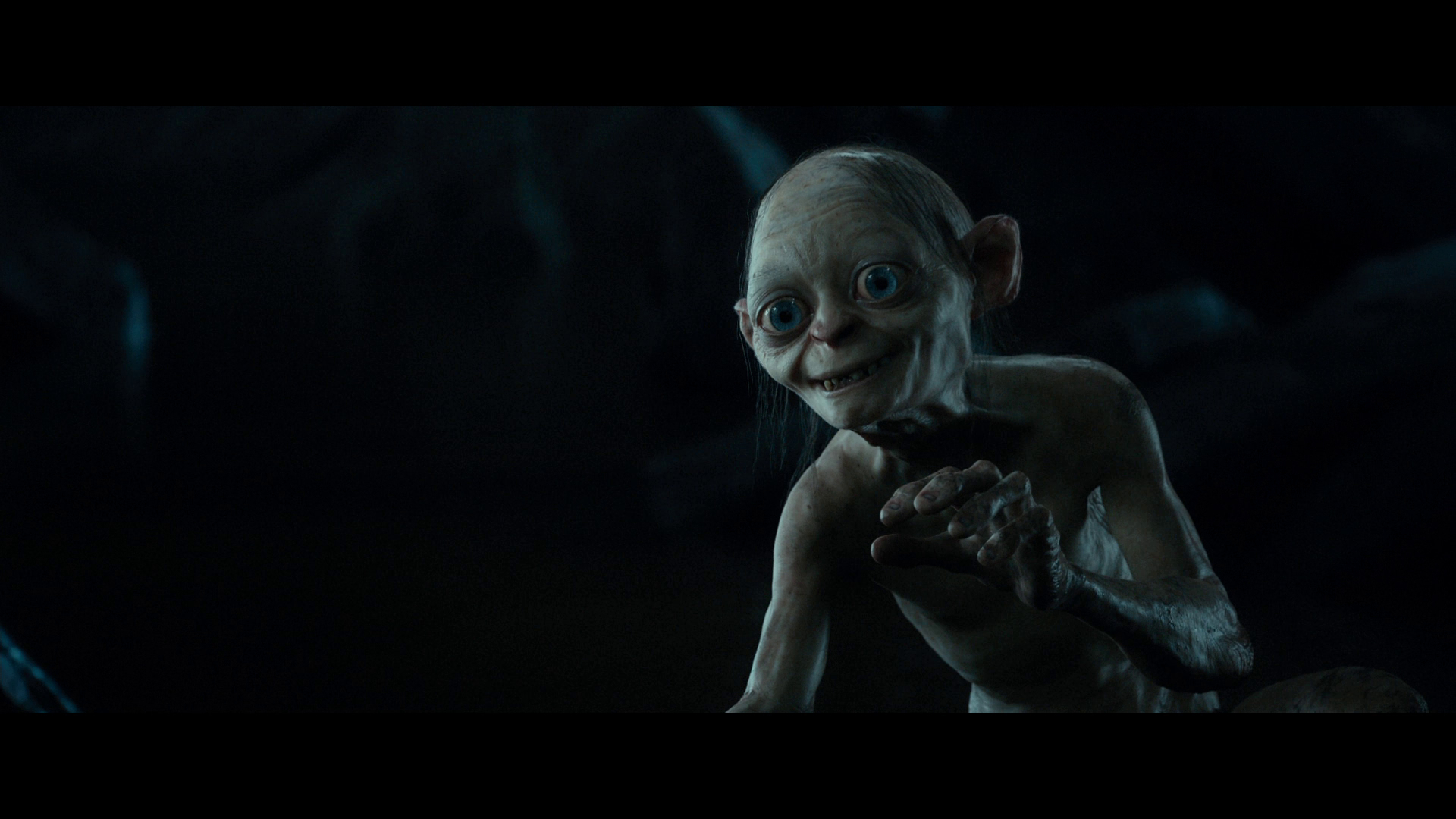 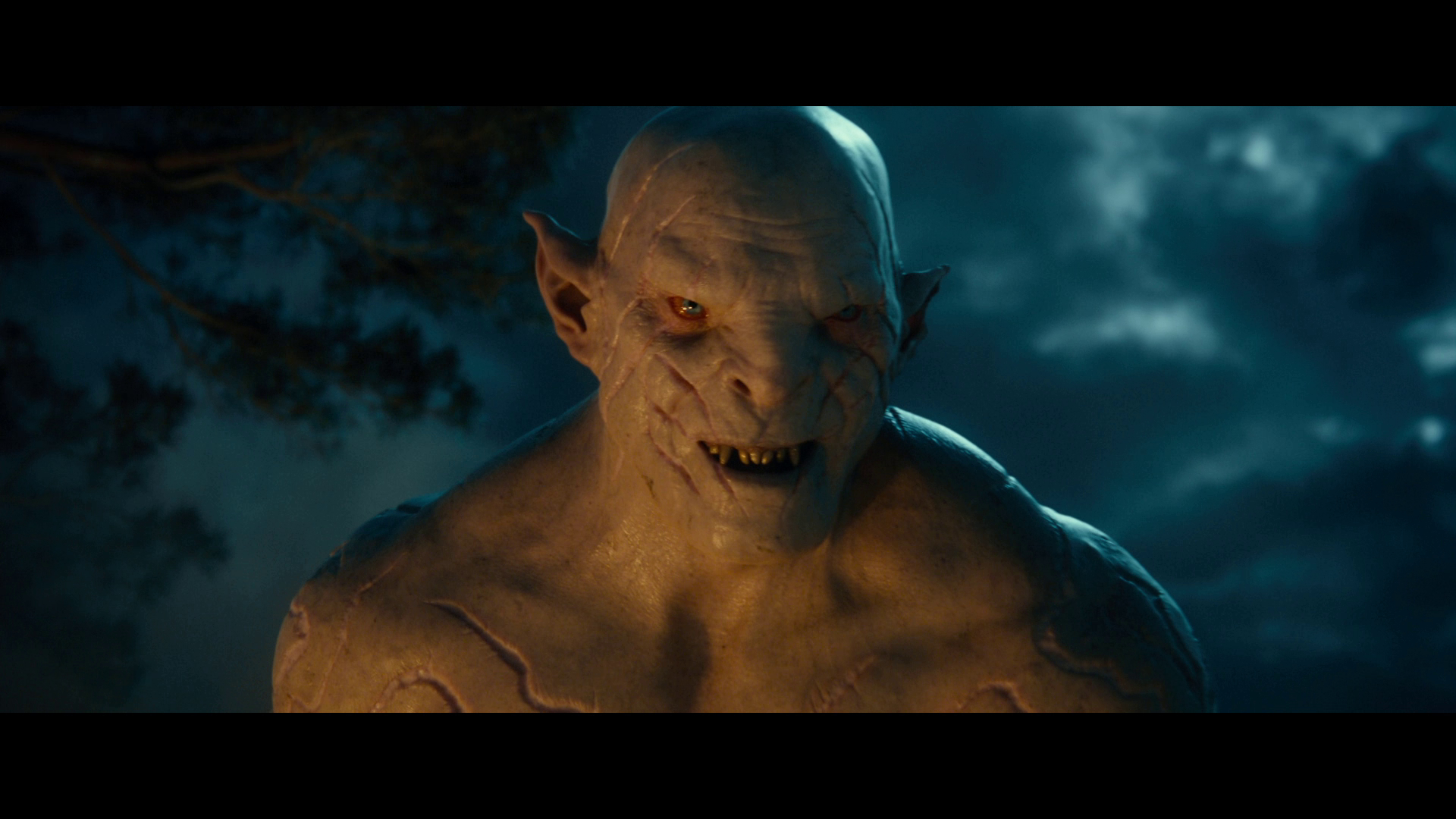 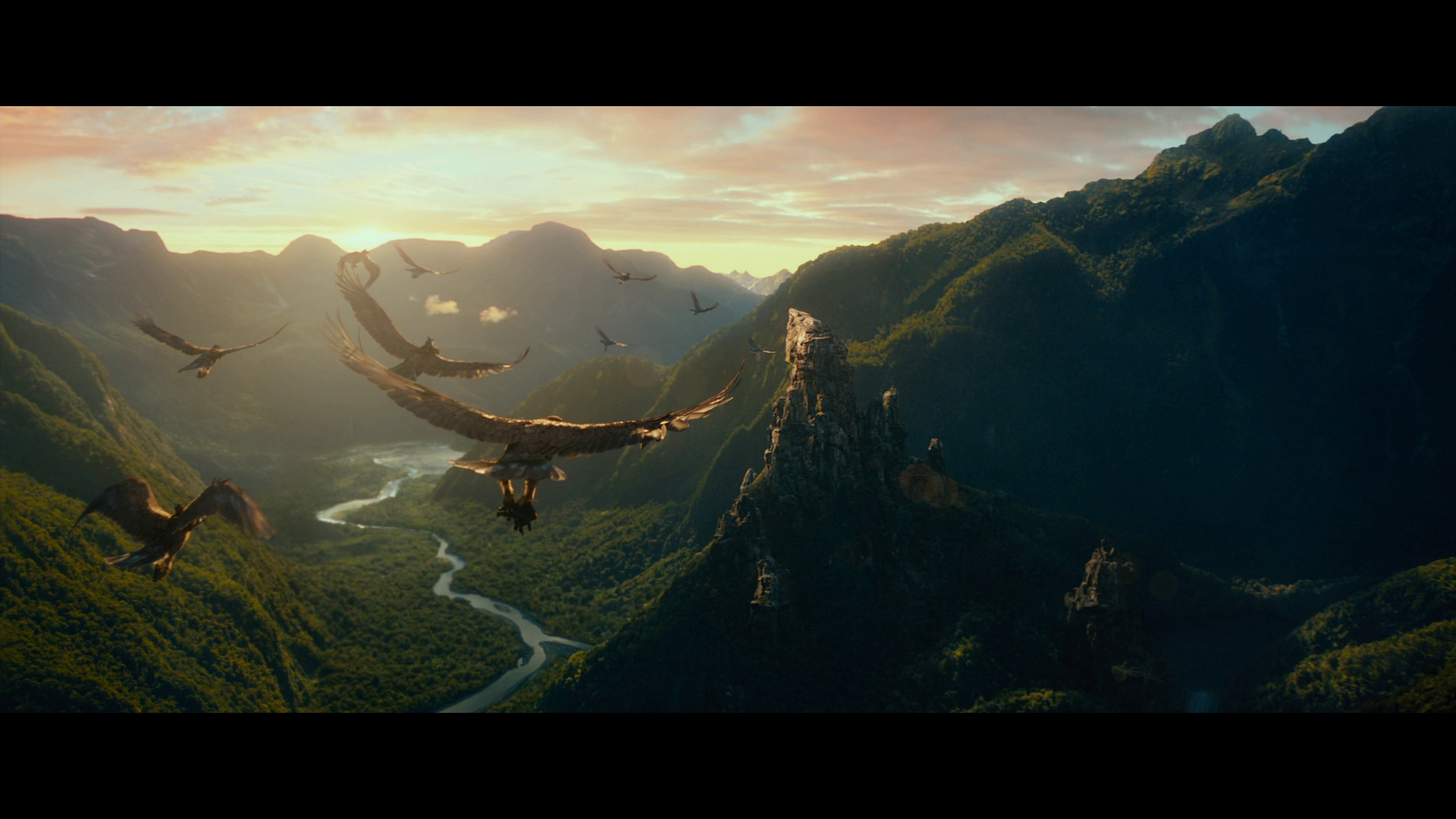 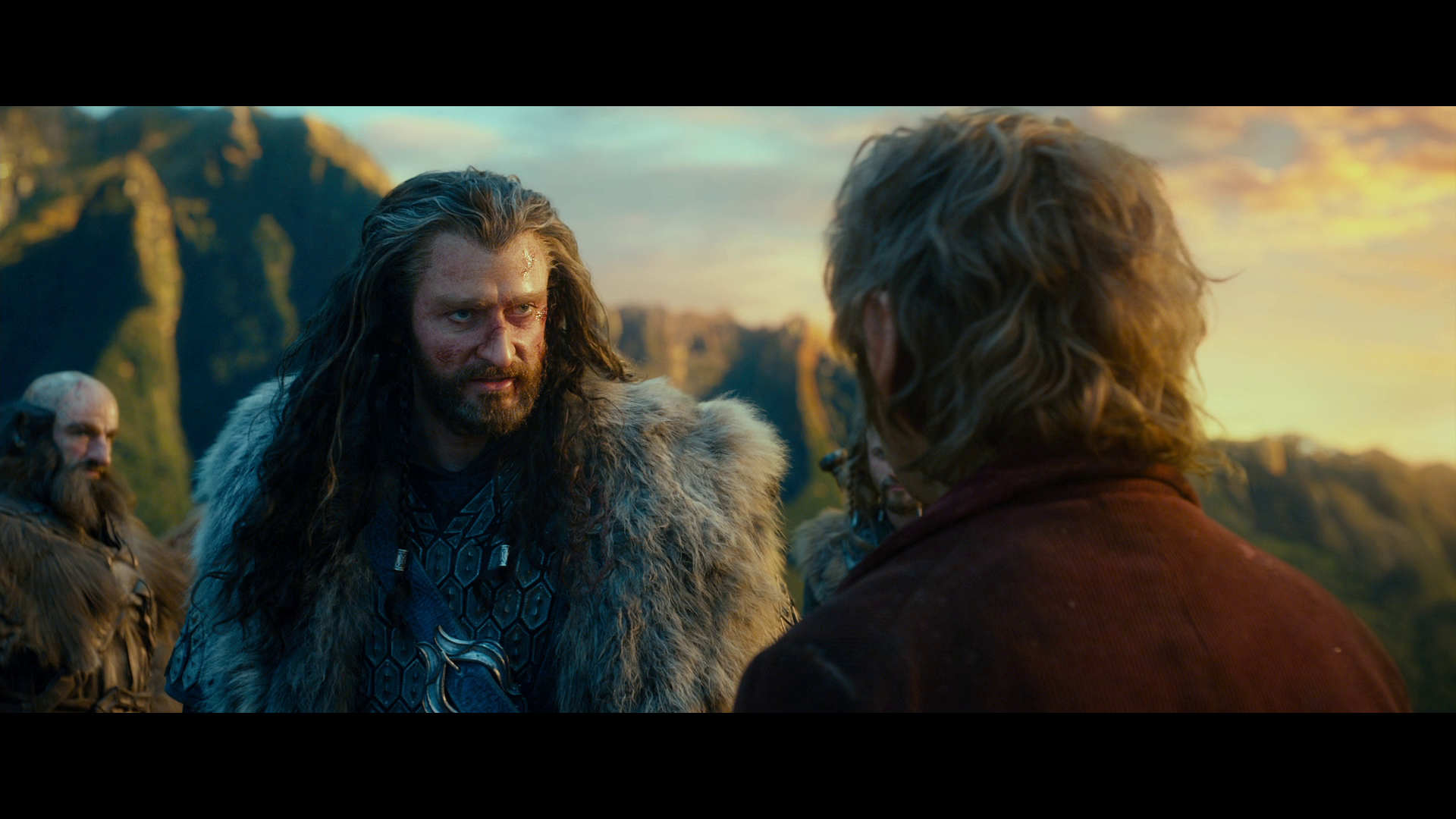 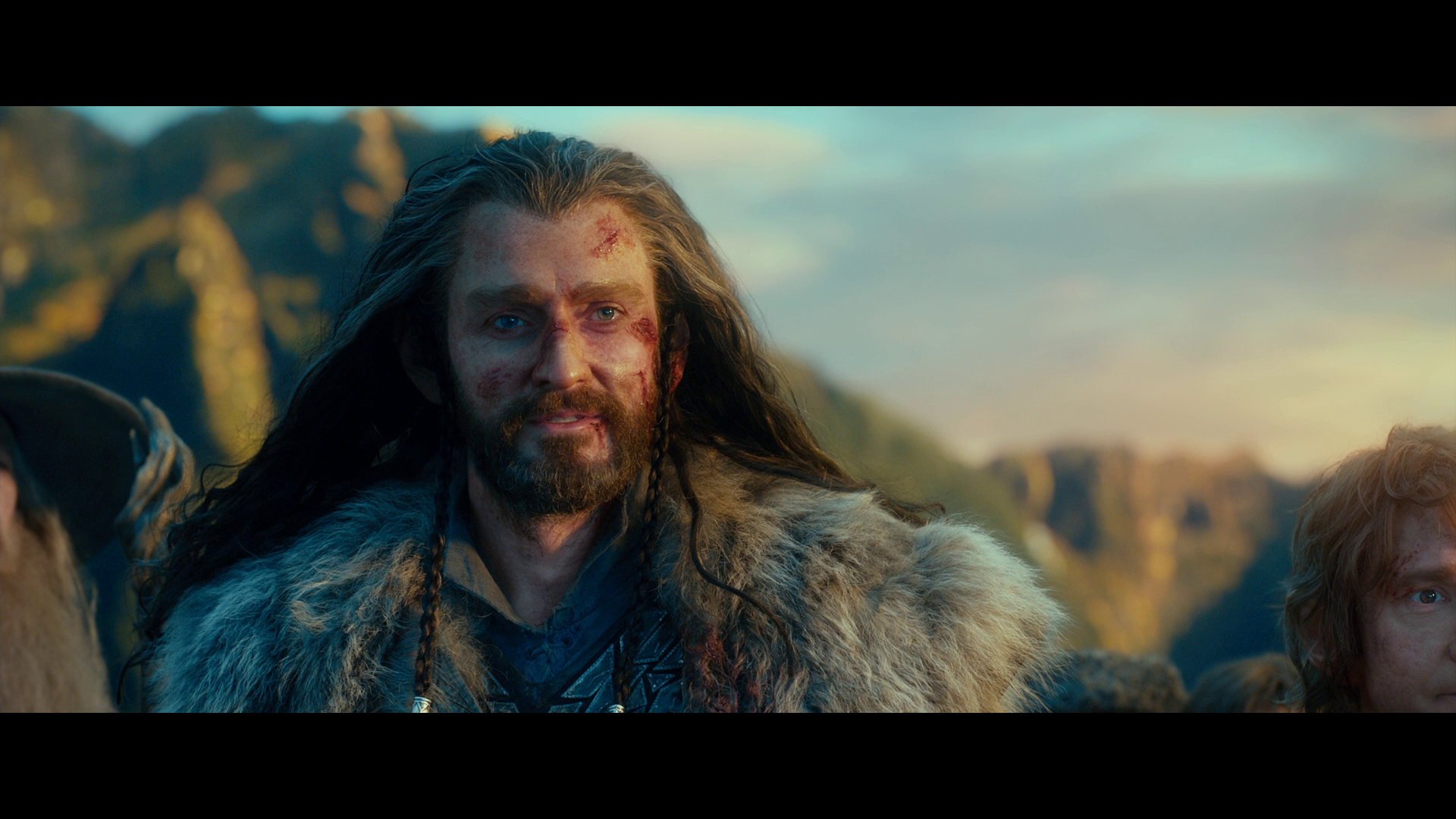 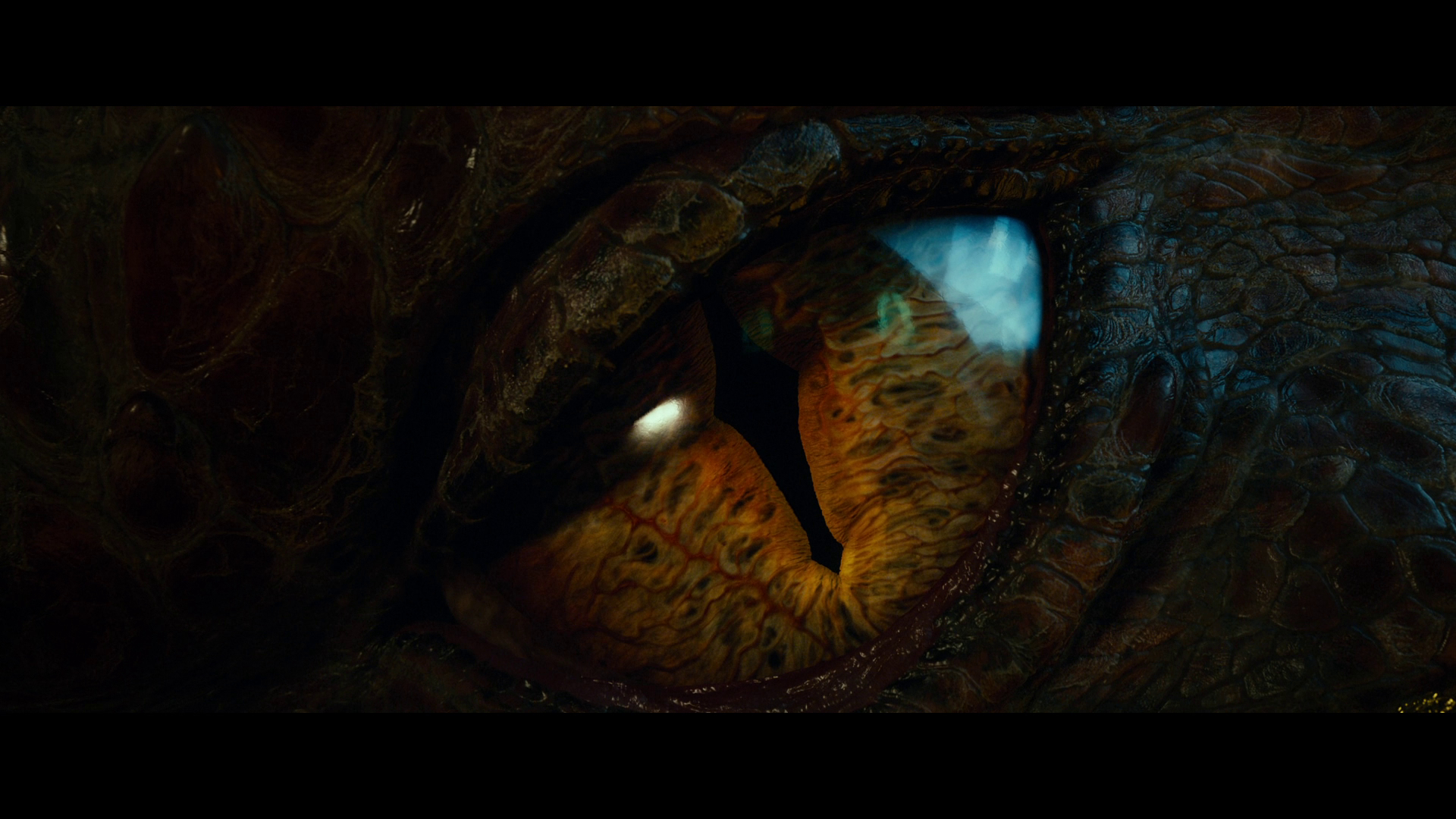