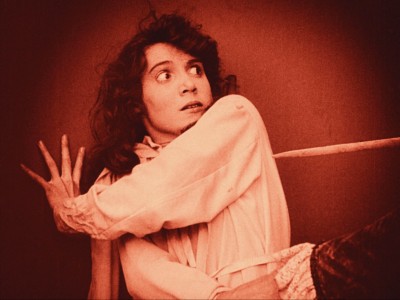 Burn my film-snob card if you must, but this new 2013 video release of D.W. Griffith's silent epic Intolerance is my first experience watching it. While I was exposed to Griffith's infamous 1915 blockbuster The Birth of a Nation in film school and watched some of Griffith's shorts and shorter features in my free time, I somehow felt satisfied without delving into this three-hour(-ish*) epic set in four interwoven time periods. I don't know what I was waiting for. This is an astonishing piece of filmmaking, presented here in a gorgeous transfer, that makes it a must-have for film lovers (even with its fairly hefty price tag).

The Birth of a Nation, despite its controversial take on race (a polite way of saying the movie jawdroppingly becomes pro-KKK propaganda in its second half), was an enormous success. The kind of success that makes an artist throw caution (and money) to the wind, in pursuit of an artistic vision. As Fleetwood Mac followed their monstrous global success Rumours with the bizarre double-album Tusk (or, more appropriately for a film website, as Michael Cimino followed The Deer Hunter with Heaven's Gate), Griffith decided that bigger is better and more is more. It all begins with the proto-Cloud Atlas idea to present four different tales of intolerance and tragedy, intercut in ways that sometimes play up the overlapping themes of the stories but sometimes seem a bit arbitrary.

Arguments are made that 1916 audiences rejected the interlocking-stories approach because it was too complex for them, unlike modern audiences who are used to multiple storylines presented at once. I would say that Griffith's approach is even a bit challenging for a modern audience, because he does not present four equally weighted stories with one basic throughline each. Instead there are two main sections of the film, and two supporting threads intended to give the entirety more of a historical sweep and thematic heft. And all of these threads contain subplots within them, meaning we have to keep track of not just the leads but also numerous supporting players of each timeframe. At one point, confronted with characters the film revisited after a huge chunk of running time spent on other stories, I found myself genuinely wondering, "Who are these people? Are they the intolerant ones or are people being intolerant to them?" (I eventually figured it out.) 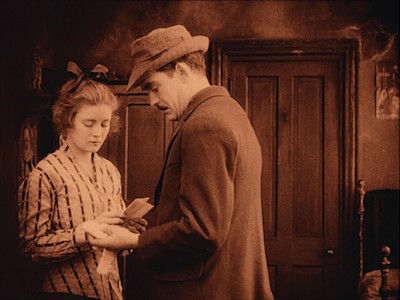 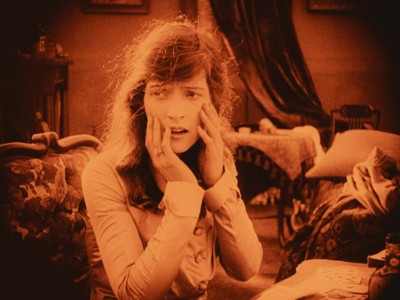 The main thread of the film is a present-day-set (for 1916) melodrama about three young people whose lives are beset with difficulties created as a byproduct of the handiwork of sanctimonious do-gooders. Forced out of the factory town where they grew up, these young people deal with life in the big city in different ways. The Friendless One (Miriam Cooper) becomes the moll of a gangster known as The Musketeer of the Slums (Walter Long), while the simply-credited Boy (Robert Harron) works for the Musketeer as a petty thief. But then, the Boy meets the innocent Dear One (Mae Marsh) and decides to go straight. This doesn't prevent the underworld and the self-appointed Uplifters (two equally insidious kinds of gangsters, the film seems to suggest) from wreaking havoc on the poor couple, so that the Boy is jailed numerous times and sentenced to hang for crimes he didn't commit, while their baby is taken violently away from the Dear One for being an unfit mother.

Many histories try to frame Intolerance as an "apology" of sorts for The Birth of a Nation. Well, the actions of the self-appointed Morality Police villains of the present-day story seem to echo the outcry of certain organizations to Griffith's previous film, and his conclusion seems to be that he has nothing to apologize for and that these organizations are only in it for their own self-aggrandizement. He draws a parallel to the Pharisees in the Biblical stories of Jesus, in one of the two supporting threads in the film, and famously cross-cuts the Crucifixion with scenes of the Boy being prepped for the gallows. Griffith wouldn't be the first or last artist to claim he was being crucified by critics, but I don't think we should presume he had any intention of being autobiographical in these moments. 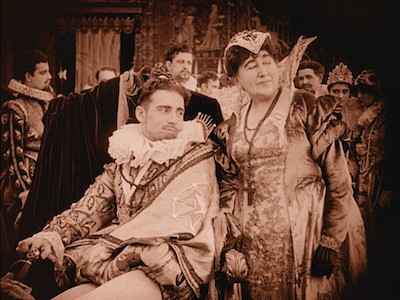 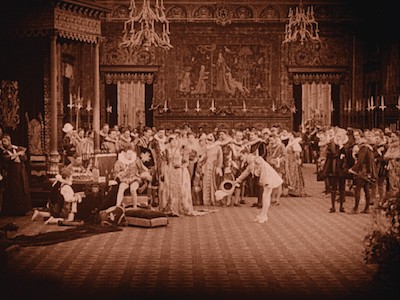 The third thread takes place in 1572 France and sketches events leading to the St. Bartholomew's Day massacre. Catherine de Medici and her supporters mastermind the massacre, while elsewhere a young Huguenot couple plans to be married. On its own, this is kind of a weak thread, but it is woven into the fabric of the film in a way that successfully shows the futility of bloodshed despite its persistence through the centuries.

The most eye-popping thread of the film is set in 539 BC Babylon. Inspired by Giovanni Pastrone's Cabiria, Griffith went all out in constructing giant sets, getting glamorous costumes, filling the frame with thousands of extras, and even getting his crew to realize one of the earliest versions of the crane shot. The Babylonian thread is grounded by the story of a tomboy-ish Mountain Girl (Constance Talmadge) who gets a crush on the prince Belshazzar after he grants her immunity from being sold into unwanted wifehood. On a grander scale, the Babylonians fight off the Persians in a brilliantly executed combat sequence that still feels brutal and shocking today. However, there are traitors in their midst, and the smitten Mountain Girl decides to infiltrate them and find out more about their plan. Will she successfully avert the fall of Babylon? Mmm... well... 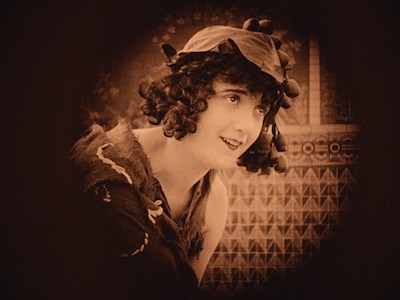 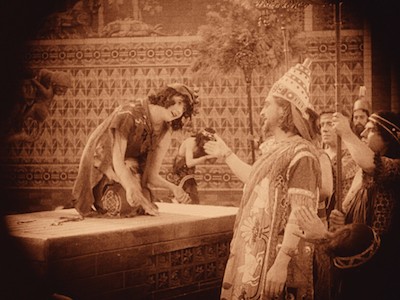 As unusual and sometimes counterintuitive as the multi-story structure seems, it pays off beautifully in the final 45 minutes as the puzzle pieces fall into place and the inevitability of historical tragedy resonates across all of time. Will we continue our destructive, intolerant cycles of behavior, or can we achieve stability and peace? Griffith's conclusion is idealistic and sentimental, but certainly not unaffecting.

The package comes with 2 Blu-ray discs. The first disc holds the film, while the second holds all the bonus features. A booklet containing a pair of historical and critical essays is also enclosed.

The Video:
The AVC-encoded 1.33:1 image is one of the best-looking silent-film home presentations I have ever seen. Presented with its original color tinting, the image has been carefully restored but it hasn't been scrubbed of its basic film grain. It's astonishing that this film is nearly one hundred years old and it looks this good. There isn't a lot of detail in the gigantic wide shots, but that's obviously the limitation of the original film stock. Certain shots involving nudity are a little beaten-up because they were probably censored and cut out of the main prints that this transfer used. Only the most obsessive-compulsive viewer will worry about the minimal specks and dirt they weren't able to clean up.

The Audio:
A full orchestral score by Carl Davis is presented in both 5.1 DTS-HD MA and 2.0 LPCM. The 5.1 mix has a nicer, all-encompassing feel, as one would expect. Sometimes I am so bothered by scores created by home video companies for silent movies that I just shut them off and watch the movies in dead silence, but Davis's work here is a well-constructed compliment to the visuals that is never annoying or calls attention to itself in a way that draws you out of the film.

Special Features:
After Intolerance flopped, Griffith isolated the modern-day story and the Babylonian story and re-released them as stand-alone films. Both of those films, the 99-minute The Mother and the Law (the modern-day story) and the 62-minute The Fall of Babylon, are included on the bonus disc. They are presented in HD with 2.0 LPCM musical scores by the Mont Alto Motion Picture Orchestra, but they are presented untinted and without being cleaned up. They aren't unwatchable, but it is a far cry from the restoration job done on the main feature. Both films were altered slightly by Griffith for stand-alone release, with some additional scenes included in the modern day story and a completely new happier ending constructed for the Babylonian story. Even though I spent a portion of my time watching Intolerance thinking the threads would be so much better on their own, I watched these isolated versions and missed all the other interweaving stories. I'm glad these edits are included in the presentation, but the fully realized Intolerance is a more potent film.

There is a featurette called Three Hours That Shook The World (19:02, HD) where film historian Kevin Brownlow discusses some of the history of the film and provides some personal anecdotes from his past experiences meeting cast and crew from the film. A very charming and informative interview.

There is also a 2013 re-release trailer and a smattering of forced previews when you pop in the disc for other Cohen Media Group releases.

Final Thoughts:
Intolerance is the kind of oddly personal epic that is as rare today as it was when audiences first scratched their heads at it. Ambitious and magnificent, Intolerance is a masterpiece. (But you didn't really need me to tell you that, did you?) The Blu-ray presentation is peerless. What more can I say? DVD Talk Collector Series. 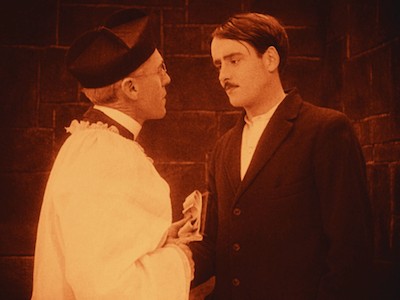 *The running time for home video versions of the film seems to vary anywhere between 167 and 197 minutes, depending on the cut of the film and the frame-rate at which it is projected. This Blu-ray version runs on the short side (167 minutes), but from what I've read online, this relates to the projection speed chosen by the preservationists and not any abridgements. For what it's worth, the action never looks cartoonishly sped-up.