Not having seen the first Red film yet having a relatively good idea of what it was about, I was surprised to see that there was a sequel in the works for it. There was that big of a demand for older actors reprising some of their former glory (along with newer ones looking to impress) did not seem like a recipe for success. Then I saw what the box office receipts for the film and understood why a sequel was ordered. So hey, more Red, more often, bring on the second film! 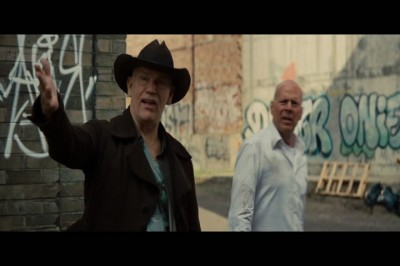 Jon and Erich Hoeber (Whiteout) continued their work adapting the comic book published under the DC banner and Dean Parisot (Galaxy Quest) directed. The film finds the return of main character, CIA Agent Frank Moses (Bruce Willis, The Jackal) as he enjoys the domestic life with his girlfriend Sarah (Mary Louise Parker, Weeds), even shopping at Costco for power tools. They are interrupted when Marvin (John Malkovich, Burn After Reading) informs them they are still being sought, this time as part of an operation they worked on codenamed Nightshade. The chase works its way through Paris and an ex-girlfriend of Frank's who is also an agent (Catherine Zeta-Jones, No Reservations) and a physicist who has been secretly imprisoned for decades and who helped build a mass destruction device as part of Nightshade (Anthony Hopkins, Thor). We also get the return of Victoria (Helen Mirren, The Queen), who helps Frank despite a contract she received to kill him, and helps to protect him from Han Cho Bai (Byung Hun Lee, G.I. Joe: Retaliation), a former protégé of Frank hired by the government to kill him.

Now I will say that as far as Red 2 goes, the first half hour is damned entertaining. Marvin is trying to bring Frank back into the mix and Frank is doing his best Michael Corleone, trying to resist going back into the hunt but is pulled back into it through forces out of his control. And early on, Jack Horton (Neal McDonough, Captain America: The First Avenger), who works for the government and (as we find out later hired Han to kill Frank) is the threat telling Frank that he will torture and/or kill him and Sarah in order to find out what Frank knows about Nightshade.

Where Red 2 falters is that it tends to overthink things and throw up a lot of roadblocks that are red herrings that it loses the viewer's interest the longer the film goes. For as much as I liked the first act, the second act just craters any investment I had in the film because of so many unnecessary distractions. You can generalize what happens in Red 2 this way: virtually every antagonist goes through some sort of character swerve that is supposed to distract the viewer from what the antagonist's beliefs are. The only one that does not go through this metamorphosis appears to be McDonough, whose character gets increasingly marginalized as the film goes on. The poorly told second act tacks on 10-15 minutes to the feature that easily could have been trimmed from Red 2 to make it a better movie, but I suppose everyone needed a scene or two to chew on and enjoy.

In terms of the performances, they are generally without complaint. Willis and Parker have good chemistry together and separately, and Willis' Frank attempting to protect Parker's Sarah from CIA unpleasantness while Sarah continues to not have a problem with performing undercover is entertaining to watch. Malkovich is easily the funniest person of the bunch, not only attempting the best John Malkovich impersonation people have seen so far, but delivering the funniest lines in the film with aplomb. Zeta-Jones is fine in her role, though in between this and Ocean's Twelve she is threatening to become a Ted McGinley to the modern franchise film. Hopkins has fun in his role, though in between his appearance and Brian Cox (who appeared in the first film as the Russian Ivan Simanov), I'd vote the latter, a.k.a. Hannibal Lecter 1.0, has the more entertaining turn. 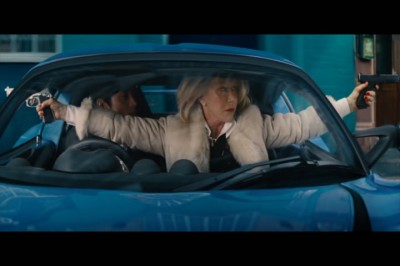 As much as the actors like their various characters, the fact that the story dilutes their harmless and occasionally entertaining work is more of a detriment to Red 2 than anything else. The overthinking in the storytelling from the brothers Hoeber hampers this popcorn movie from being what it is, and that is the fatal flaw. I hope they realize this error when Red 3 inevitably goes into preproduction.


The AVC encode which Red 2 is given (in 2.40:1 widescreen) looks amazing to be sure. Despite an occasional moment of image softness, detail is sharp both in the foreground and background, the latter of which getting ample opportunity to show off the Montreal, Paris and London exterior shots. Black levels are deep as the grown up end of the pool and the film's color palette is replicated with loyalty and without problems in saturation. For the most part, the disc's transfer is sharp as a tack.


Just as impressive, albeit slightly more so is the DTS-HD MA lossless 7.1 surround track for the film. It is active from the beginning as a car explodes within the first several minutes of the movie and goes from there, with ample use of directional effects and subwoofer activity. Channel panning is just as abundant and effective and puts you in the middle of one of any number of firefights that occur. A late third act car chase with Mirren firing guns out of both windows is one of the better demo sequences for audio that I have heard recently, and the film balances quieter dialogue sequences with the flashes and bangs about as effectively as they come.


Well there is a quartet of featurettes that look at the production and roll up under a banner titled "The Red 2 Experience." Clocking in at more than a half hour (34:41), these examine the returning cast and their thoughts on the characters and working with one another, the new cast discusses their thoughts on the set and the director talks about working with said cast. The guns, stunts and driving sequences are covered in individual segments also, and the Hoebers discuss the significance of each character's weapon as a match for them. Technology in the movie and the respective spy gadgets are even discusses and even a theme or two is mentioned. The segments are a tad long but they are decent. Five deleted scenes (4:27) and a gag reel (4:24) are bland. The film comes with a standard definition disc and a code to use for both the Ultraviolet and iTunes services.


For those who are already familiar with the mythology around Red from the first film, it extends the core characters nicely and presents average character conflict nicely. But it tries to be too clever for itself and loses the viewer in the process, and it goes from semi-entertaining to tedious during some of its most vital parts. Technically, the disc is excellent though tends to lack a bit on the bonus material side of things. But if you're looking for marquee names blowing things up or shooting guns a lot, this is a good red meat to sate the appetite.