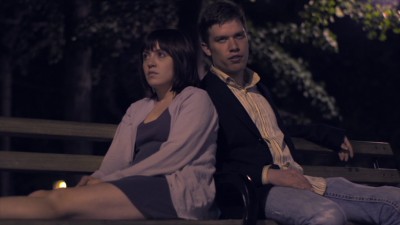 The title suggests something profoundly disturbing, perhaps trading cheaply in shock value, yet to dyed-in-the-wool American independent filmmaker Dan Sallitt's credit, The Unspeakable Act keeps its head well above the waters of sensationalism at all times. This is much easier said than done when your protagonist's driving motivation and your film's principal dramatic conflict is not just taboo, but the taboo, the one from which Freud's Totem and… derived its name. Yes, Sallitt's 17-year-old contemporary Brooklynite Jackie (the captivatingly lunar-faced Tallie Medel) doesn't love her one-year-older brother Matthew (Sky Hirschkron) in the usual fraternal way; she is sincerely and disturbingly (to herself and him, too) in love with him, and they both know it and grapple with it as best they can. Amazingly, Sallitt, his artistic/technical crew, and his actors spin this story quite successfully as one not of ferocious moral reckoning or cautionary quagmire, but as a clear-eyed (self)-assessment of one girl's more or less (well, somewhat less) typical struggles as a teenager who's all too well aware of -- yet still, ultimately, helpless to escape -- the limbo to which that stage of life consigns us, the intolerable in-betweenness (child or adult? Dependent or self-reliant? Both, and neither) of being almost, but not quite, grown up. 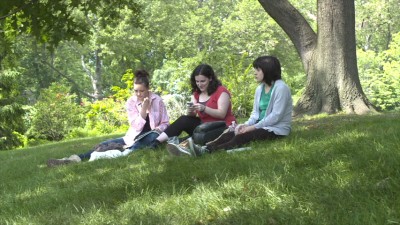 The Unspeakable Act is Jackie's first-person recounting of the events of the summer of 2011 (they're filtered through her confiding, disarmingly limpid voice-over narration), when a first serious girlfriend and an imminent departure for college spell Matthew's graduation into what Jackie scornfully but resignedly calls "normal, healthy, mature" pastures, away from the true but dangerous sibling closeness. The film takes an easy, almost serene pace in unspooling this summertime plot in which Jackie reluctantly but inevitably begins to sever the lifeline from her impossible, safe fantasy of Matthew and turn hesitantly toward the colder air of reality: She dates, she studies, she prepares her own college applications, all while forced to pretend she's not dying inside as she feels Matthew and their special bond and openness with each other mutating into something more healthy that will leave her abandoned and despondent. The film sends Jackie into therapy, which makes for some good, engaging character-centered scenes between the precocious, self-aware Jackie (for this, believably, is presented as the natural condition of latter-day Brooklyn youth) and her therapist (Caroline Luft), but it never presumes to psychoanalyze or moralize in a manner that would rob Jackie, Matthew, or their quiet, serious, bookish, evidently loving and well-adjusted family/home environment of our compassionate interest, or diminish their conundrum by squaring it away. The restraint with which Sallitt hones this vision of family life that conventional wisdom would dictate as "dark" never presents the unspeakable as a deranged symptom to be diagnosed, but a legitimate (and legitimately buried) hurdle of Jackie's adolescence to be leaped if she wants to really grow up (and she's hardly certain that she does). 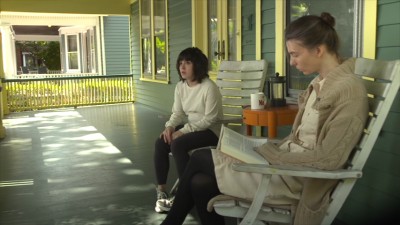 And yet…. "Restraint," like any tonal/temperamental choice in the telling of a story, is not a panacea, but a double-edged sword that must be wielded carefully, and it slips surprisingly often for a creator of Sallitt's demonstrable wisdom and acuity. He has evidently had his (inexperienced and/or nonprofessional) actors "recite" rather than "perform" their lines, and while not ruinous, it hampers or even stilts certain scenes that Sallitt has calling for expressions of emotion (Robert Bresson and Hal Hartley have integrated the same line-recitation-acting strategy to more consistent and effective, distancing effect, but their films tend to be rigorously reflective rather than expressive, while The Unspeakable Act wants it both ways and doesn't quite succeed). The restraint itself isn't really as consistently maintained as it could be either; I'm always grateful when a film forgoes non-diegetic sound (Sallitt has left things, aptly, scoreless), but the indie-kid-isms and bourgeois-bohemian Brooklyn milieu of the gang we meet (like that of The Squid and the Whale, but presented more complacently and less critically) are their own distracting, superfluous ornateness, and come to seem like a veneer that impedes and evades the depths and vulnerability we can glimpse through the drifting clouds of affectless, complacent outer-borough cool. 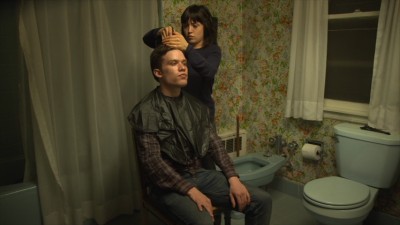 Restraint does go over and win the day in Sallitt's deployment of Duraid Munajim's high-def digital videography; there are moments of hard-to-attain elegance of lighting and composition, both up close and from afar (see how an entire gray slab of high-rising urban architecture looks to be borne aloft by Jackie's shambling, hoodie'd figure on a dismal, cloudy afternoon) that elicit as much emotion as the film's most successful moments of characterization and expressed or implied feeling; its bumpy but captivating ride is smoothed somewhat by the consistently well-targeted intuitiveness of its imagery. The film is, in all, one of those happy mixed-bag cases where the deficiencies and bits that don't quite make it have a harsher light thrown on them by how clearly high the filmmaker has set the bar, and by the stretches where he does reach it. It's a "little" movie with big ideas from a fine cinematic mind, and if the cries of "revelation" and "masterpiece" that have greeted it (and would have been apter accolades for Sallitt's earlier, better work, All the Ships at Sea, heretofore un-widely seen but thankfully included here) don't seem quite warranted, it is a film that attains its laudable goals of grace, intelligence, and true, unsentimental understanding well enough to be, despite its noticeable straggling in parts, still well worth our time. 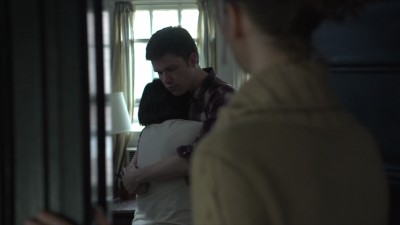 
This transfer, retaining in anamorphic widescreen the original aspect ratio of 1.78:1, does full justice to Duraid Munajim's lovely digital-video cinematography, its cool-ish color palate, lush but natural clear-day exteriors and intimate, warm, and often dimly/partly lit interiors all preserved beautifully, without any aliasing and with virtually no edge enhancement/haloing, and no other compression artifacts to be seen.


The disc's Dolby Digital 2.0 track is reliably very true to the film's carefully simplified sound (dialogue being most prominent, with room-tone or ambient atmosphere calibrated for naturalistic aura), which comes through solid, clear, full, and immediate here, with no muffling, distortion, or imbalance. 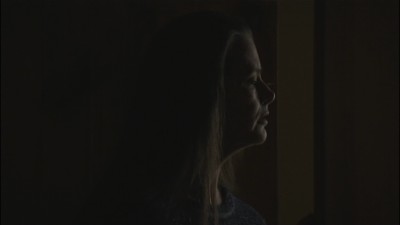 
--In a more ideal world, Sallitt's 65-minute 2004 film, All the Ships at Sea, would have been the principal, main event of the disc, and The Unspeakable Act the "extra," for it seems a much fuller, or at least more carefully considered and applied, example of Sallitt's rare writing/directing gift. This is, perhaps paradoxically, because it's a much less "full," or fraught, film: Two middle-aged sisters, Evelyn (Strawn Bovee) and Virginia (Edith Meeks, always under-utilized after her star turn in Todd Haynes' early debut feature Poison and memorable cameo in his masterpiece, Safe), the former a Catholic and the latter recently booted out from an eccentric (to put it mildly) cult struggle together, in a weekend recounted by theologian Virginia to a priest colleague (Dylan McCormick), with their disparate beliefs and takes on their shared, emotionally scarring childhood at the hands of ambitious, abstracting and distant intellectual parents. The serenely composed/compassionate style recognizable from The Unspeakable Act (with videography also by the tremendously skilled Duraid Munajim in both cases) is more consistently well-suited to the themes and events (conversations, really -- but we are allowed to see and feel how they are also events) Sallitt surefootedly creates here; along with his lovely, thoughtful, emotionally seductive and rhythmic exchanges of dialogue and the fantastic performances by the two leads, it makes for the truly unmissable, unreservedly recommended piece of the package it so enriches.

--You Called Me (2006, 12 min.), a short film -- essentially a long, clever but low-key gag -- by Sky Hirschkron (The Unspeakable Act's Matthew), featuring the revealing (or are they?) park-bench, cell-phone, and IM communications of a couple (or are they?) of Japanese exchange students in New York.

--A scene from Daniel Scheinert's web series "Everything a Monster is Not" featuring The Unspeakable Act's Jackie, actress Tallie Medel (with an intro title card from Sallitt stating that it was based on Medel's distinctive performance here that he cast her).

--About six minutes of alternate takes (or scenes from the final cut containing audio later modified or omitted) from the film.

--The film's theatrical trailer, along with previews for other eminently worthwhile Cinema Guild releases.

--A fold-in insert with an essay by critic Adrian Martin delving into his take on the film's qualities. 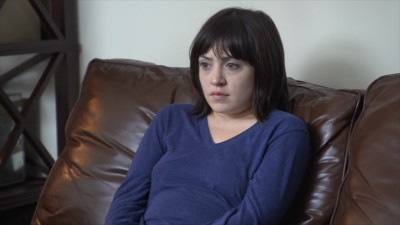 It can't quite be everything it wants to be, but Dan Sallitt's The Unspeakable Act -- a tale of a universally disapproved-of longing, a teenage girl's romantic attraction to her older brother -- never once succumbs to sensationalism or shock value, quietly acknowledging Jackie's (Tallie Medel) problematic situation, its difficulties and tortuous emotions, with a remarkably level head, open heart, and lack of hysteria, moralizing, or sentimentality. But its very modesty and quietness is what ultimately holds it back not only from simplistic rushes to judgment but also from being wholly convincing when it tries for unmediated moments of emotion, which is a significant drawback: not all of Sallitt's brave risks pay off, and the film falters here and there, never attaining the heights it sometimes let you envision for it. Still, it's worth having on hand as a somewhat flawed gem that, though it doesn't always have the wherewithal to sustain its sputtering brilliance, does absolutely and unusually have the courage of its convictions, and offers up some moments of rare, patient understanding and understated observation. Because the disc places, as an "extra," Sallitt's earlier, markedly superior full-length effort All the Ships at Sea alongside the "main," more recent, more ambitious, less successful picture, the disc as a whole can be Highly Recommended, with the advice to watch the older film first as the true main event. 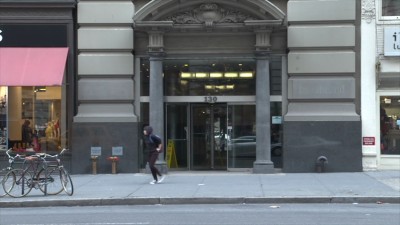