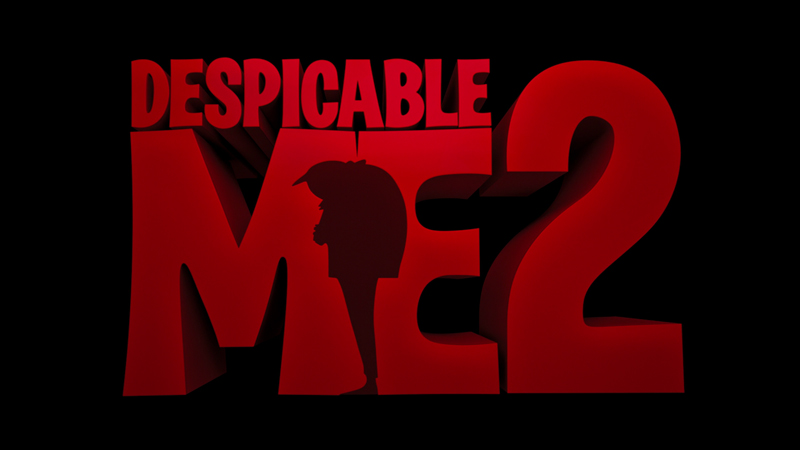 
The Story So Far...
The first film from Chris Meledandri's Illumination Entertainment, Despicable Me was a out-of-nowhere hit, telling the animated story of Gru (Steve Carell), a supervillain who becomes a dad to three girls, while trying to take over the world with the help of his army of little yellow minions. The movie was released on Blu-Ray and DVD in December of 2010, and DVDTalk has a review.

The Movie
When an animated film makes the kind of money that Despicable Me did, it's a guarantee that at least one sequel will follow, and more likely an entire franchise. So it was no surprise when Despicable Me 2 arrived, with production on two follow-ups already underway. It was also no surprise to see the immediately-popular minions, those gibberish-spouting yellow capsules, return in a featured role. The second film changes things up a bit though, as Gru has settled into fatherhood comfortably, and having given up the evil game, his minions (and old Dr. Nefario) have a lot more free time. That is, until Gru is recruited to work for an international anti-villain organization and someone starts kidnapping the minions one by one.

Working for an international crime-fighting group to hunt down who stole a secret laboratory (and the chemical it created) puts Gru in the middle of a mall, undercover as a store owner, where suspects abound, including a potentially megalomaniacal wig salesman (Ken Jeong) and Eduardo, an overtly macho Mexican restaurant owner (Benjamin Bratt) with a guard chicken. The job also gives him a partner, the sunny Lucy (Kristin Wiig), whom everyone from Gru, to his daughter Agnes, to the minions quickly fall for. Alas, love is never quite that simple, especially when evil is involved. 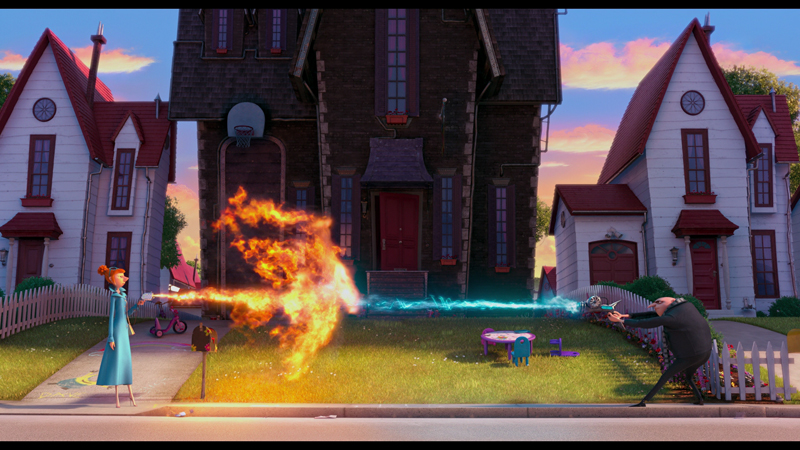 Though the pairing of Gru and Lucy are fun to watch, and the minions remain ever amusing, the reason why the first film was such a success was the relationship between Gru and his "goy-els," Agnes, Edith and Margo. Though they are still present, and have their moments, with Margot falling for Eduardo's bad-boy son and Agnes hoping for a new mom, the trio feel incidental to the overall movie, which is much more focused on Gru's new job. That's really the key issue, as with all the supervillain fighting, Lucy wooing and minion trapping, there's just too much going on that doesn't speak to the characters' core appeal.

Despite those concerns, Despicable Me 2 is a good time, offering plenty of laughs, a ton of silly action and a few of the heart-felt moments that made the first film so memorable (just far too few of them.) A little scene between Gru and Agnes, where he tries to communicate with her via charades reminds you how much fun Daddy Gru can be, and why we miss him for much of this movie. Of course, the minions keep things fun at all times, between their ridiculously funny looks and their oddball behavior (though the chemically-enhanced minions didn't work as well), and you'll be hard pressed to find a kid who doesn't love this movie's over-the-top way. I don't know if the minions can carry a movie by themselves, but they certainly make for a great punchline whenever it's needed. 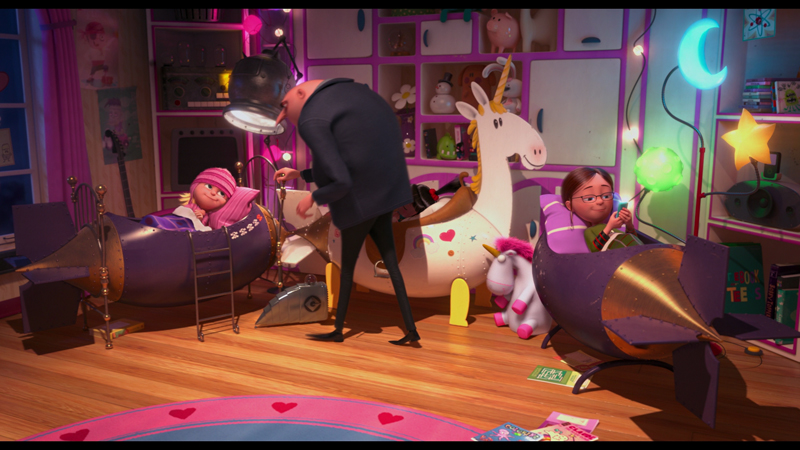 The Discs
The film arrives on a Blu-Ray disc and a DVD, in a standard-width, dual-hubbed BD keepcase (in an embossed, spot-UV-coated slipcover) with a a few promotional inserts. The Blu-ray sports an animated menu (no Universal curve!) offering the option to watch the film, select scenes, adjust the subtitles and check out the extras. The disc offers audio in English DTS-HD Master Audio 5.1, and French and Spanish DTS 5.1, while subtitles are available in English SDH, French and Spanish.

The Quality
Presented via a 1080p, AVC-encoded transfer, this movie looks terrific, with bright, vibrant color and a very high level of fine detail, along with deep black levels and and impressively sharp image that isn't troubled by noteable digital distractions. The artists at work here loaded each scene with beautiful detail and gorgeously rendered style, making it a fun movie just to watch.

The 5.1 DTS-HD Master Audio track here has no issue keeping up with the visuals, especially with all the cartoony action at play. While dialogue is clear and distortion-free in the center channel, the surrounds are particularly active, with a dynamic mix that moves smoothly across the soundfield, along with enveloping atmospheric effects, which are punctuated by the low-end's thumps that arrive with each big bang. Listening to this movie, you know you're watching some big-time action.

The Extras
The extras that grab the most attention are the minion-focused mini-movies, as these shorts are the perfect outlet for the lil' guys' silly good times. Up first is Puppy (5:06), which sees one of the minions' adopt a UFO as a pet. It's cute and sweet, playing off aliens' darker nature just enough. Panic in the Mailroom (4:46) re-introduces the chemical from the film, which puts some cute widdle kittens in peril. This was amusing, but my daughter didn't appreciate the danger the furballs faced. Then, Training Wheels (4:48), an Agnes-focused short, was my own little "goy-el"'s favorite, as Gru's youngest gets some bike-riding help from the minions. All of them are cute and hold up to repeated views, though annoyingly each has a voiceover by Carell as Gru, which plays each time. Not necessary at all.

The films are followed by a featurette on their making (5:45, giving equal time to each, while explaining their role in the development of Illumination talent and also giving you a look at how the two sides of Illumination, one in California, the other in France, work together.

The other big extra is a feature-length audio commentary by the directing team of Chris Renaud and Pierre Coffin. The self-deprecating duo have good chemistry as they explain what's happening on-screen while also diving into deleted story ideas, their process, and how they were influenced by a film that didn't come out until after production had wrapped. A solid track that points out a lot of details you might otherwise have missed.

The remainder of the extras are mostly featurettes featuring a mix of interviews with most of the leads in the film, the producers, directors and writers. "Gru's Girls" (5:36) naturally focuses on his daughters in the film, and you get to see and hear from the actresses who play them. Agnes is just cute on or off-screen. "A Gru-some Transformation" (5:28) is Gru-centric, with Wiig, Carell and company talking about Gru's new life and how that played out in the movie. Then "The Minions" (3:08) is a silly little piece talking about the creatures as though they were actors on the film. "Evil Minions" (4:08) was preferable, as you got to see how the chemically-treated minions were designed.

"El Hombre Malo" (4:18) lets you spend a little time with Bratt, as he, and others, talk about his character, while "Gadgets Galore" (4:13) has some fun looking at the many unusual weapons and tools that are utilized in the film. Most of these featurettes are a bit fluffy, but they'll strike a balance for kids and adults. The extras then wrap up with a brief deleted scene (:48) which took place during Gru's rough childhood. It actually could have made it into the movie without much of an issue.

Also included are several trailers, along with an access code for an UltraViolet copy of the film. 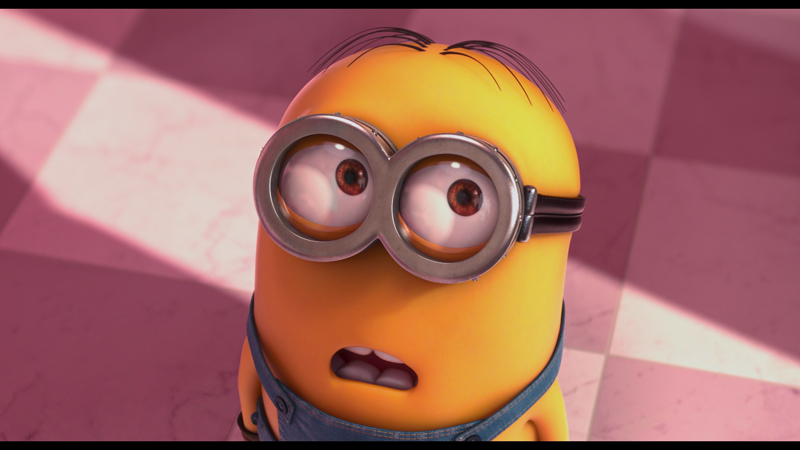 The Bottom Line
Despite its many additions and inflations, I didn't enjoy Despicable Me 2 as much as the first one, even if it still was great fun to watch. It's just different. However, the kids who loved the original are likely to be enamored of this one as well. The presentation here is wonderful, and there's a nice selection of extras, including even more minion fun to enjoy. If the first movie was your cup of tea, here's a second serving.