Though I'm not quite old enough to remember when Richard Nixon was president, being born shortly before he was elected to his second term, I've had a strange curiosity about him as he has thus far been the only United States president to resign from office. Among the items confiscated by the FBI in the famous Watergate investigation, which tied Nixon to a break-in at the Democratic National Committee headquarters, were about 500 Super 8 film reels of personal footage shot by the president's Chief of Staff H.R. "Bob" Haldeman, Nixon's Domestic Affairs Advisor John Erlichman and Special Assistant Dwight Chapin. Each had obtained a Super 8 camera (before home video cameras were practical) and receiving free film and processing from the US Navy Photographic Center they filmed pretty much whatever they wanted. At the time they thought of it as a contribution to Nixon's eventual presidential records, as well as something to show their grandchildren. The film ended up being confiscated and largely forgotten about, although the National Archives had them copied to 16mm to ensure their preservation. Producers Penny Lane (yes, that's her real name) and Brian L. Frye happened to know the person hired to make the 16mm copies and felt "there was a very special film in there, just waiting for someone to make it," and obtained video transfers of all of it to peruse. 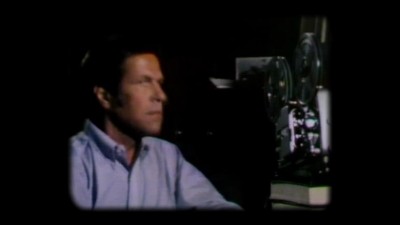 The result of that is an 84-minute collage of footage, narrated only by occasional on-screen text and archival audio, much of it from the audio tape of conversations and phone calls inside the White House which Nixon had been secretly recording since 1971. Historically significant footage includes talking to Neil Armstrong on the moon via phone (and a few seconds of the TV screen in an adjoining room) and the 1971 China visit, while in more mundane moments we see several minutes of birds and squirrels outside the White House windows. Over a walk-through of parts of the White House, we get to hear Alexander Butterfield explain to Nixon how his voice-activated tape recording system works, assuring him that only five people know about the system and Nixon saying "Mum's the whole word, I will not be transcribed." Ironically this system would later provide the evidence that led to his resignation.

A leisurely walk around an outside yard is accompanied with audio of Nixon remarking to Haldeman about a "movie" he had seen on TV the night before, which had a "stupid old fellow" and glorified homosexuality- Haldeman informs him that it's a regular show called "All in the Family" and the "general trend is to downgrade this square hardhat and upgrade the hippie son in law." Several phone calls to Haldeman are also heard after making speeches on national TV, discussing how they went (Nixon says "it was a goddamn good speech" after one of them). While watching birds outside a window, Nixon and Erlichman discuss on the phone how to best handle an impending mass protest against the Vietnam war- Nixon confirms "Oh, God, no!" as Erlichman says it would probably be best not to call out the troops and just let the local police handle it. Many White House gatherings are shown, including the engagement announcement of First Daughter Tricia Nixon, and a performance by the Ray Conniff Singers (which Nixon introduces with "if the music is square, it's because I like it square"), that is shaken up a bit when one member (Carole Feraci) holds up a banner reading "Stop the killing" and urges the president to end the war. 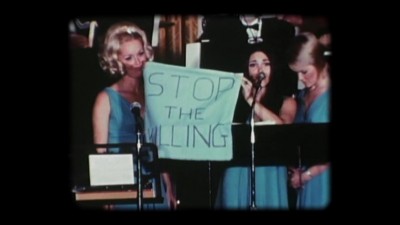 For all the Super 8 footage that exists however, a large amount of time is taken up by TV news clips, taken from a taped archive of NBC, CBS and ABC's nightly news broadcasts which was in black and white with the date and time at the top of the screen (you may have seen some of these online.) While this helps to put the events into context, it does make up much of the running time and take away from the film footage most will be viewing Our Nixon to see. (I've always wanted a high-quality DVD collection of complete TV newscasts from before the VCR era however.) There are also a few interview clips with Haldeman, Erlichman and Chapin dating from after Nixon's presidency through 2008. In a 1982 clip, Erlichman remarks that in hindsight it would have been better for him to have just told the press everything he knew about the Watergate affair rather than staying quiet about it. Mike Wallace in 1975 asks Haldeman what the "mindset" was that led to Watergate and gets mostly "I don't know" answers. 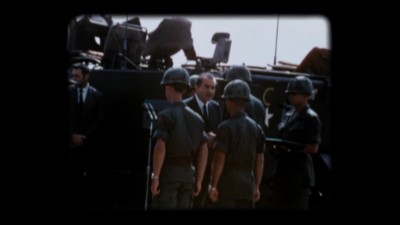 While the filmmakers had used the 16mm dupes of the home movie footage to put Our Nixon together, they had a big break when the original Super 8 reels turned up at the Nixon Library and were able to use those instead, yielding an infinitely better picture. The video transfer is on the level of a major studio production, with practically no dirt or scratches that are common in this type of footage. Some of it wraps around a bit at the top or bottom of the screen, but having dealt with 8 and 16mm film myself I know how difficult it is sometimes to get them framed perfectly. The TV clips are all shown at 24 frames per second instead of their native 30 (possibly because Our Nixon was made for a theatrical release) and most of the black-and-white news segments are also shown as a very small window in the middle of the screen. The disc is encoded in 16x9, even though nothing is seen beyond the 4x3 side borders. 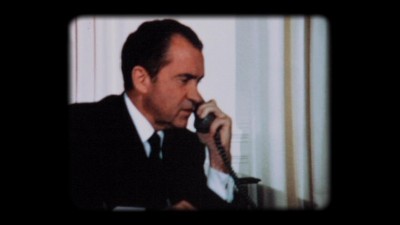 The presentation makes good use of its 5.1 Dolby Digital mix, with the original archival audio kept in the center but accompanied by a music score in the front and rear channels, with some crowd noise added also during footage such as the Vietnam war protests. (I do have to wonder why Tracey Ullman's 60s-flavored 1984 hit "They Don't Know" was chosen to play during the opening credits.)

The only hearing-impaired support is through standard closed-captions, which of course require an analog video output that many new players no longer have. I found them to be of use as they displayed the name of the song performed by the Ray Conniff Singers ("Ma, He's Making Eyes at Me") after the unexpected protest. 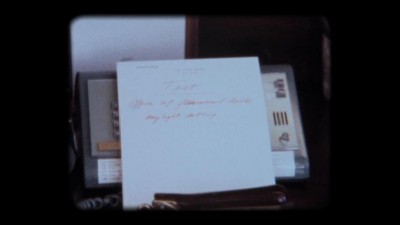 A subtitle track available during the main feature displays the names of most of the noteworthy persons appearing onscreen (verifying that in fact I was seeing Henry Kissinger sunbathing outside for example.) There are also two sections of additional 8mm film footage with no audio and less editing: "Nixon and Friends" which is about 11 minutes of appearances with politicians and entertainers such as Ronald Reagan, George Bush, Prince Charles and Bob Hope to name a few. "Travels With Nixon" is an hour's worth of footage in places outside the United States, including the Philippines, India, Russia and of course the famous China visit. All of these are transferred in a 16x9 frame with the proper ratio except that the aperture plate has been removed, exposing the sprocket hole on the left. 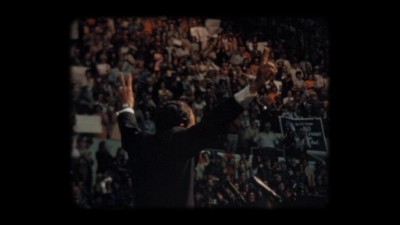 Our Nixon brings to light this largely forgotten film footage and shows the high and low points of the Nixon presidency. I personally would have preferred much fewer of the television clips in favor of more of this footage, but regardless it remains essential viewing for those interested in this disgraced (but still respected by many) president, whether they were around at the time or not. Our Nixon's website states that DVDs of the complete unedited film footage were given to those who donated a certain amount to its Kickstarter fund, so it's possible they may turn up for public purchase in the future.