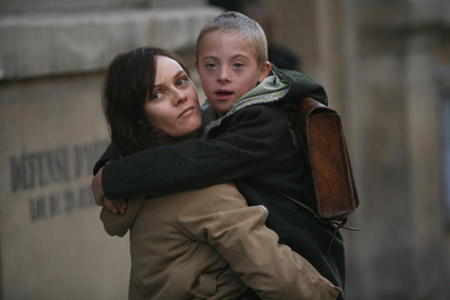 Please Note: The stills used here are taken from promotional materials and other sources, not the DVD edition under review.

Remember Highlights for Children, the magazine that seemed to exist only in doctor's office waiting rooms? The 2011 film Café de Flore plays like the Hidden Picture page from that old mag. While I'm aware that it sounds like faint praise (the film is actually quite a moving experience), this contemplative drama encourages viewers to linger over the details - to figure out where its two seemingly disparate narratives intermingle with each other.

Director-screenwriter Jean-Marc Valée (Dallas Buyers Club) structures Café de Flore with two parallel stories set in diverse times and places, interspersing each with remarkable flow and rhythm (if anything, this movie is craftily edited). The rawest, most emotionally taxing of these is the one belonging to Jacqueline (Vanessa Paradis), a single mother determinedly raising a learning-disabled boy in '60s-'70s Paris. Though modest in means, Jacqueline devotes all her energy to defying society's expectations in bringing up Laurent (Marin Gerrier), a seven year-old boy with Down Syndrome. Using all her spare time to tutor the child herself, she eventually saves enough money to have Laurent enrolled in a school for learning-disabled kids. Getting her son into the exclusive school counts as another small victory for Jacqueline, but their status is threatened when Laurent forms an iron-clad bond with one of his classmates - a little girl named Véronique (Alice Dubois). The kids' friendship at first comes as a relief for both Jacqueline and Véronique's wealthy parents, yet their disruptive behavior (throwing tantrums whenever separated) causes the school to conclude that these two are beyond rehabilitation. For Jacqueline, it's a devastating blow to her already fragile psyche - and the pathological obsession she has for her son.

Café de Flore interweaves this intimate tale with another story concerning a blended family in 21st century Montreal. Antoine (Kevin Parent) is a 40 year-old successful deejay enjoying the prime of his life with his blonde companion, Rose (Evelyne Brochu), and two young daughters. Although Antoine's ex-wife, Carole (Helene Florent), is attempting to move on after their painful divorce, she's unable to let go of the belief that Antoine was meant for her and no one else. Antoine, meanwhile, uses his music to deal with his father's alcoholism, his children attempting to adjust to their new family, and lingering memories of bonding over goth music with Carole in the '80s. Carole's current partner, Amélie (Evelyne de la Cheneliere), shares her resentment over Antoine's sudden interest in Rose. Amélie becomes genuinely concerned for her companion's mental well-being, however, when Carole starts having disturbing visions, sleepwalking bouts, and the destructive resolve that she and Antoine should have never separated.

While the DVD box describes Café de Flore as "a love story about people separated by time and place, but connected in profound and mysterious ways," the final results wind up being too thorny and interesting to be summed up with a simple description. Sharp-eyed viewers might note the similarity between this and the dilemma Nicole Kidman's character faced in Birth - although this film has artistic pretensions as sky-high as that 2004 opus, it's written and directed with a lot more nuance and understanding on how relationships work (and fail). The project serves as the singular vision of the Canadian filmmaker Valée, whose other films include the lively coming-of-age drama C.R.A.Z.Y. (2005) and critics' darling Dallas Buyers Club (2013). With this effort, Valée lovingly molds this seemingly prosaic story into a monument to love and human attachment in all its complexities.

A project as ambitious and fragmentary as Café de Flore ought to not work, yet I was seduced by its dream-like flurry of flashbacks, cross-cutting, and atmospheric, music-filled passages. As with Valée's C.R.A.Z.Y., music plays an important role here in defining the characters and their states of being (including the title, which refers to the lilting, Bossa Nova-style tune which was playing when Antoine first saw Rose). One almost has to watch it twice to catch all the instances where characters, props and other signals overlap between the various stories (for instance, Antoine's daughter is seen reading Anne Rice's Interview with the Vampire, a book which also appears in his flashbacks with a teenaged Carole).

For all its flaky interest in the paranormal and weakened mental states (do the Down Syndrome kids know something we don't?), Marc Valée gives Café de Flore a well-crafted plausibility in both scenarios. He's committed, and it shows in the generally excellent performing of the cast. One standout in particular is the award-winning work of Vanessa Paradis. The French singer/actress, best known for being Johnny Depp's longtime companion, delivers a fantastic, raw performance in a film filled with notable acting. For those who seek out unique, challenging cinema, Café de Flore ought to provide ample opportunity for some lively after-the-fact discussion (it did in our household, anyhow). 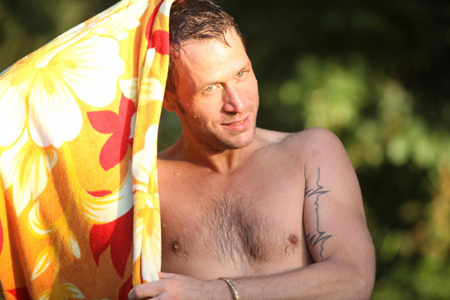 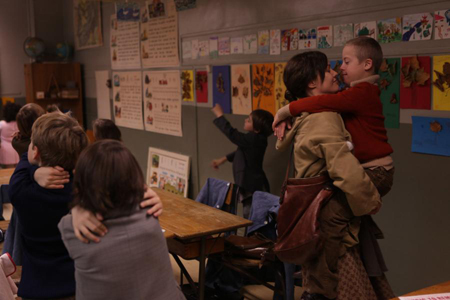 The lush photography in Café de Flore makes it ideal for the high-def treatment (a Region 1 Blu Ray is available - for the Canadian market), yet the 2.35:1 letterboxed anamorphic image used with Adopt Films' U.S. DVD release suits its purpose well. The image is somewhat soft with often muted colors (on purpose), yet this transfer accurately captures the film's browned-out melancholy in the '70s scenes, as well as the crispness of the contemporary parts. The subtitles are burned onto the image in a small white font, which doesn't pose too many problems - even if it isn't the best way to go.

The disc's French language Dolby Digital Stereo track tends to get a little brassy and strident whenever music is playing, but generally it's a pleasant mix with clear dialogue and atmospheric use of sound effects. No alternate audio or subtitle options are provided.

The disc contains zero extras - not even a scene selection menu.

In exploring the messy complications of two families in two different time periods, the 2011 French-Canadian drama Café de Flore serves as a visual puzzle in which the central theme is the impetuousness and pain of love. Not for those who enjoy films with clear-cut, pat storytelling, perhaps - auteur Jean-Marc Valée graces this emotional, heartbreaking project with plenty of atmosphere and élan, however. Recommended. 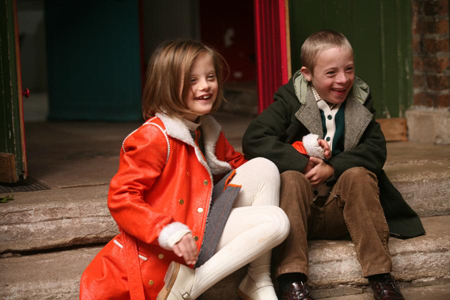