Naked City (1958-59, 1960-63), the gritty, filmed-in-New York antecedent of shows like Law & Order and NYPD Blue, at long last becomes available as a Complete Series, 29-DVD set. The show had been kicking around on DVD piecemeal for the last ten years or so, first as four-episode DVDs distributed by Image then, two years later, as 10- to 12-episode sets, but that still left more than half the series unreleased. Finally, Naked City: The Complete Series marks the first time that all 138 shows have been made available, particularly those from the less-familiar first season of half-hour episodes featuring different leads. 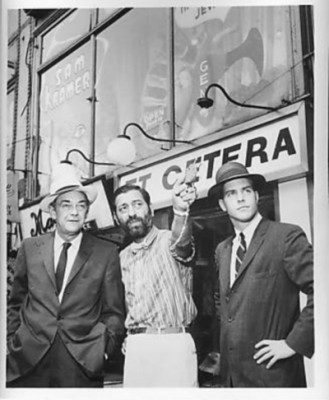 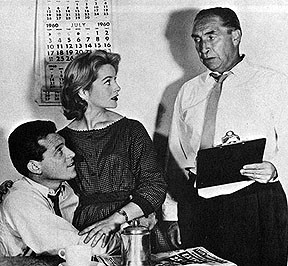 Originally adapted from the Jules Dassin-directed film noir-policier The Naked City (1948), the first season starred John McIntire and James Franciscus as veteran New York homicide detective Lt. Dan Muldoon and his green, clean-cut associate, Det. Jimmy Halloran, characters played by Barry Fitzgerald and Don Taylor in the earlier film. That version of the show was less the quasi-anthology that the later, hour-long version of Naked City quickly became, with an emphasis on the father-son like relationship between Muldoon and Halloran.

However, a bit more than halfway through the season McIntire decided to quit the series, preferring his rural Montana ranch to the grind of a weekly series filmed in New York. In a then-rare, if not unprecedented move, the producers opted to kill off his character, which occurs in the opening scenes of "The Bumper," the 25th of 39 first season shows. In that episode Muldoon is transporting an informant under police protection when gangsters ride alongside, ram Muldoon's police car that loses control and slams into an oil truck, bursting into flames. I'm guessing those who saw the show when it originally aired were quite shocked by Muldoon's sudden and violent death.

That episode also introduced Horace McMahon, another Mac, as Muldoon's replacement, Lt. Mike Parker. (I suspect the producers of Law & Order were reminded, perhaps only subconsciously, of McMahon when they cast Jerry Orbach as Lt. Lennie Briscoe. There's a strong physical resemblance between the two.)

Naked City limped along to the end of its first year but was cancelled due to low ratings. However, Brown & Williamson, a tobacco company sponsor of Naked City (and later the subject of the movie The Insider) and the show's producers decided to revamp Naked City as an hour-drama, which premiered in September 1960, 15 months after the last half-hour show aired. Paul Burke as Det. Adam Flint replaced James Franciscus, busy with other parts during the show's absence, but McMahon returned as did Harry Bellaver, who in the earlier series had a regular role as Det. Sgt. Frank Arcaro. New to the cast was Nancy Malone as Libby, Flint's aspiring but working actress girlfriend, she playing bit parts in big Broadway shows while he's hitting the pavement.

Though creator and executive producer Herbert B. "Bert" Leonard dominated the first season, even narrating episodes himself, the hour version of Naked City became closely associated with writer and executive story consultant/editor Stirling Silliphant, who later said (quite rightly) that his best Naked City scripts were superior to own his Oscar-winning screenplay for In the Heat of the Night (1967). (They were certainly superior to his later, awful screenplays for "Master of Disaster" producer Irwin Allen!)

Silliphant and others gradually shifted the show's focus away from the detective's squad room and their personal problems to the perpetrators and victims of crimes Flint and Parker investigated, essentially turning Naked City into a quasi-anthology show about troubled New Yorkers and their conflicts. (One half-hour episode, "Four Sweet Corners" and starring George Maharis, became a "back-door pilot" to Silliphant's equally celebrated Route 66.)

I'd seen many of the hour-long Naked City episodes, which ride or fall on the quality of that week's teleplay and, to a lesser extent, the guest stars, who sometimes overcame weak material. Generally though, I found myself preferring episodes revolving around Muldoon & Halloran/Parker & Halloran/Parker & Flint, rather than episodes in which they're shuttered off to the sidelines, preferring those even over better-written episodes showcasing top-drawer talent of the day like William Shatner, Peter Falk, Jack Klugman, Piper Laurie, and Shirley Knight, to name five illustrious examples.

The first of the hour shows exemplifies my point. In "A Death of Princes," Det. Flint witnesses celebrated Det. Bane (a perfectly cast Eli Wallach) sadistically gun down an unarmed suspect (an uncredited Peter Falk) in the prologue. He goes to Mike for help, but Flint's diplomatic boss handles the investigation with kid gloves, eventually subtly assigning Flint to spy on the trigger-happy cop. Where even many of the good anthology-type episodes are very much a product of their era, this one stands out as very ahead-of-its time, the kind of thing that with few changes would play well even today.

Needless to say, for a review like this I could only frantically bounce around from season to season, sampling a handful of episodes, but friend and esteemed television historian Stephen Bowie helpfully points to some of the show's highlights: "For the half-hour version, the Christmas episode is good, as are ‘The Rebirth' and ‘The Shield.' Some others are really lousy though - see ‘The Sandman' or ‘The Violent Circle"' if you don't want to stack the deck. Clearly it was a production schedule that required Silliphant to use every idea that came to mind, from the great to the barely coherent. For the hour show, anything written wholly by Howard Rodman, Ernest Kinoy, ‘Joel Carpenter' [actually blacklisted writer Arnold Manoff], or especially Abram S. Ginnes is a safe bet. Ginnes's ‘The One Marked Hot Gives Cold,' ‘And By the Sweat of Thy Brow,' and ‘King Stanislaus...' are essential, and ‘Kill Me While I'm Young...' is the uncredited remake of [Akira Kurosawa's 1952 film] Ikiru (which he confirmed to me was intentional). ‘Prime of Life' is the death penalty episode that supposedly got the show cancelled [according to some TV historians], and in terms of guest cast and Greenwich Village locations, ‘Hold For Gloria Christmas' is maybe the quintessential episode. ‘A Case Study of Two Savages' is another fan favorite, although I don't think it's quite top-tier. If you want a real turkey, check out ‘The Contract' or ‘The Virtues of Madame Douvay.'"

Naked City was emphatically a New York show. Most interiors were filmed at the old Biograph Studios in the Bronx, but more importantly outdoors the show was shot all around there, Midtown Manhattan and Greenwich Village, among other places. Seeing these pre-gentrified locations as they existed in the late 1950s and early ‘60s is endlessly fascinating, as episodes of Law & Order: Special Victims Unit might seem 50 years from now. Like that show, Naked City pretty much seems to have been given access to virtually anywhere in the city that they wanted to film, including the subway system which is particularly interesting to see as it existed then.

Naked City: The Complete Series comes in a big cardboard box with each of its four seasons getting their own separate DVD case. The packaging is pretty bare bones, with episode titles and airdates listed inside, and which emphasizes the stellar list of guest stars rather than the quality of the writing. (Which, purely from a marketing standpoint, I suppose makes some sense.) The hour-long episodes of seasons 2-4 generally look quite good, while season one's episodes are decidedly more dog-eared, though they're still perfectly watchable. Rights to the series are unusually complex, despite this originally being a production of Screen Gems, Columbia Picture's television-producing subsidiary. The convoluted explanation for this, as well as the sad fate of producer Leonard, is described in detail in Stephen Bowie's recommended article found here. It also sort of accounts for the condition of these and also Route 66's problematic video masters. The audio, Dolby Digital English mono only with no alternate audio or subtitle options, is essentially fine.

The only supplements are a smattering of original television commercials, found on Disc 1 of Season Four.