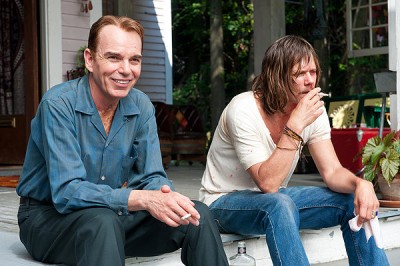 When I worked at an indie video store some time ago, a customer once told me, "The more famous people in a movie you've never heard of, the less chance it has to be good."

Ladies and gentlemen, I give you Jane Mansfield's Car, actor Billy Bob Thornton's return to directing (after Sling Blade and All the Pretty Horses). Not only does Jayne Mansfield's Car give proof to this mathematical formula, but it also pulls off what I thought would have otherwise been impossible. Seriously, I'm not sure I believe it, but there might actually be a movie this year that had a less satisfying, less conclusive ending than The Desolation of Smaug.

This Southern period piece, co-written by Thornton and his scripting partner on The Gift, Tom Epperson, is essentially a story about different generations and the changes that separated them at the end of the 1960s. I say "essentially," because despite that fairly clear premise, for much of the movie, the authors seem as lost as their most addled characters, leading to a non-ending that is, for all intents and purposes, the pivotal scene of a much better film than the one that preceded it.

The core plot revolves around two families, the Caldwells and the Bedfords. These clans have never met, and they are only brought together at last by the passing of the only thing that connected them: the death of Naomi Caldwell. The Southern Belle (apparently played at some point by Tippi Hedren in an uncredited cameo) left her Alabama home and her family years before to marry Kingsley Bedford (John Hurt), a British man whom she lived with until she died. Now he and his two children (Frances O'Connor and Ray Stevenson) are ferrying Naomi's body back to her place of origin, putting them in direct contact with her first husband (Robert Duvall) and their four children, three boys and one girl.

The Caldwell's are in their own state of upheaval even before this upsetting news. War has been a constant in their lives. Two of the sons, Skip and Carroll (Thornton and Kevin Bacon) fought in WWII and came back with their fair share of scars, both physical and mental. Carroll is now a hippy protesting the Vietnam conflict and hoping to spare his own son seeing combat; Skip has never been the same since coming home, he is a bit of a manchild who can't keep a train of thought on the tracks. When the two family units merge, the results are unexpected. The old men get along, while Skip and the Bedford daughter, and the Bedford son and Skip's sister (an excellent Katherine LaNasa), hook up. Amusingly, it's the "free-spirited" Americans that get the most damaged by these dalliances.

The title Jayne Mansfield's Car is a direct reference to the vehicle that the buxom actress died in. Duvall's Jimbo Sr. is a chronic rubbernecker. He monitors the police scanner for news of terrible car wrecks and then rushes off to look at the carnage. There is some kind of a metaphor here. Jim Caldwell actively examines other people's misery while doggedly avoiding his own and that of his children. In what should be a key scene in the film, Jim and Kingsley go and see the vehicle Mansfield died in, which is touring the country as a sideshow attraction. It's two old men who both had a relationship with a beautiful blonde looking at the wreckage of a different beautiful blonde, but any real connection between the dead actress and their dead love isn't so much ambiguous as it is nonexistent.

Thornton is a competent director who handles the period details well, only occasionally letting his setting lapse into cartoonish dress-up. He pulls off the individual scenes with skill, and he draws together a fantastic ensemble of actors (which also includes Robert Patrick and Ron White) and coaxes consistently fantastic performances out of them, but as a storyteller, he largely fails to see the forest for the trees. Jayne Mansfield's Car never gels. It's a series of vignettes that lends more importance to giving each actor a showcase scene than it does the connective tissue that should bring those scenes together.

This makes Jayne Mansfield's Car a bit frustrating. It's well done in its way, but also aggressively average. It's never horrible, but also never that good. Like an old man on a porch (of which it has two), the film is just content to sit there. The script is in need of a serious rewrite and the final cut could benefit from a judicious editor. The scenes that directly address the issue of warfare and the relationships of fathers and sons, and the effect of one on the other, hints at a rather powerful drama waiting to be found in subsequent drafts on the screenplay. Which brings us to that horrible conclusion, itself indicative of the entire movie, in that it's not so much a bad ending as it is a false start that arrives way too late. 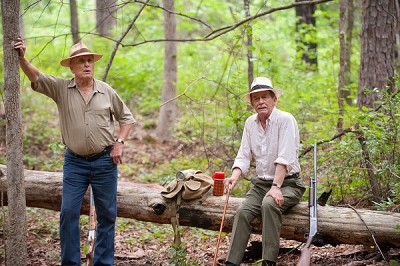 Video:
Anchor Bay releases Jayne Mansfield's Car as a well-handled Blu-ray, boasting a 1080p transfer, showing the movie at a 2.35:1 aspect ratio. Colors are warm and look natural, with a decent grain and crisp resolution. Not much to complain about here, it's a perfectly executed disc.

Sound:
The audio is given a strong Dolby TrueHD 5.1 mix, working subtly with the aural atmosphere to layer effects in the back speakers while giving full force to the dialogue.

Extras:
A standard behind-the-scenes, clocking in just below the 10-minute mark.

FINAL THOUGHTS:
Rent It. Billy Bob Thornton bites off a lot in his latest directorial endeavor, Jayne Mansfield's Car, but the dude doesn't have the choppers to properly chew it. An amazing ensemble cast makes the movie watchable, but it's a hollow collection of dramatic skits, like watching a supergroup of the greatest musicians of rock history playing the most banal covers you can think of. There's a good movie in here somewhere, but it maybe needs a different writer. Or director. Or star. Pick one, Billy Bob! You can't have all three! 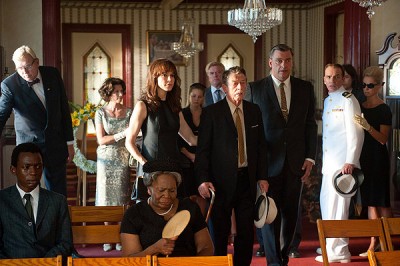