Lionsgate Home Entertainment // Unrated // February 18, 2014
List Price: $39.97 [Buy now and save at Amazon]
Review by Stuart Galbraith IV | posted March 3, 2014 | E-mail the Author
Nurse Jackie, in its fifth season, remains one of the best dramas (with much comedy) on television today. It hasn't lost a bit of a punch, and like its titular character, (currently) recovering drug addict and acerbic nurse Jackie Peyton (Edie Falco), the show is full of ballsy surprises and stronger than ever.

As I discuss in my reviews of Nurse Jackie's first, second, third, and fourth seasons, I actually didn't care for it all that much initially; the first few episodes of season one struck me as overly-familiar variations on Paddy Chayefsky's The Hospital (and later the NBC series St. Elsewhere), a black comedy take on a hopelessly broken health care system, albeit done on a much smaller, more intimate, 30-minute show scale.

But Nurse Jackie quickly found its footing, sporting a similar mélange of deliriously eccentric characters and situations. At its core it is a portrait of a working (and, as the season begins imminently divorcing) mother of two little girls who is just barely (and at times not quite) holding everything together: her children's education and their emotional wants and needs; her relationship to them; her management of an emergency room where there's never enough money or supplies or qualified doctors. Outwardly she's rock-solid, strong, assertive, confident, and unfazed by the dozens of problems and injustices hurled at her every day.

Her runaway addiction to every pharmaceutical drug imaginable finally caught up with her toward the end of season three, and despite entering rehab (with great trepidation) during season four, the dangerous cocktail of rampant drug use, work, and a family all came crashing down. Her barkeeper husband finally discovered the addiction she had been taking Herculean pains to hide, as well as the on-and-off extramarital affair she'd been having with her hospital's pharmacist/supplier. Jackie finally got sober, but she appears to have lost her husband for good, he threatening to take full custody of their two daughters.

Lionsgate's Blu-ray of Nurse Jackie - Season Four is, once again, way above average, with two discs containing all 10 half-hour episodes, buttressed by strong transfers and a lot of extra features. (One BIG complaint, however, is that it takes forever to actually get to the show itself. The Interpol warnings and legal disclaimers are not skippable, and there are what feels like 20 minutes of ads.) 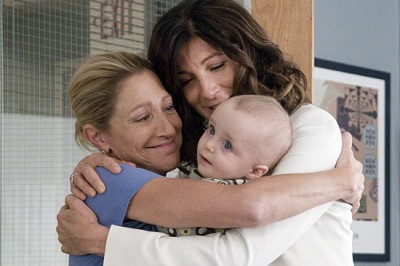 Jackie is sober and back on the floor at the start of Season Five, which opens the day before her birthday. She's hoping to convince her bitter, estranged husband, Kevin (Dominic Fumusa), to break with the terms of their separation and allow her to see the kids that day, but he's having none of that, and indeed is as downright hostile during their divorce arbitration as she is compromising.

More bad news: hospital administrator Gloria Akalitus (Anna Deavere Smith) is showing early signs of what appear to be Alzheimer's disease, putting patient care at risk, while a new doctor, beautiful Carrie Roman (Betty Gilpin) uses her good looks to cover utter incompetence as a doctor coupled with intensely irritating self-centeredness. Worst of all her closest friend, obscenely wealthy Dr. Eleanor O'Hara (Eve Best), the woman who finally got Jackie into rehab, in the first episode announces that she's quitting and moving back to England to care for her newborn full-time.

But this time there's some competition. A New York cop, Officer Frank Verelli (Adam Ferrara) is also interested in dating Jackie, and unfazed when she tells him straight up that she's a recovering drug addict.

When it first premiered Nurse Jackie's drug addiction premise received harsh criticism from the New York State Nurses Association, decrying Jackie's unethical behavior, no matter that drug addiction is not at all uncommon among health industry professionals. Of course, they missed the whole point of the show, that Jackie is in many ways a remarkable nurse who probably never could have lasted as long as she did without her steady dose of painkillers and stamina-builders. She thinks of herself as a kind of Supermom, juggling her insane schedule with the love and support for her daughters, mothering she wrongly thinks she is adequately providing. They say doctors (and nurses) make the worst patients, and even in recovery Jackie thinks she's much more in control of her world than she actually is, as well as much more precariously close to falling off the wagon at any moment.

Though predominantly a drama, Nurse Jackie is also very, very funny at times. The early-stage dementia of Anna Deavere Smith's character is, for the most part, treated as a source of humor, with Jackie getting her to sign off on procedures and the like by taking advantage of the worsening condition Akalitus takes great pains to hide. Merritt Wever's hilariously eccentric junior nurse, Zoey, so sentimental and anxious to bond with the resolutely unsentimental and nearly misanthropic Jackie (despite Jackie's contrastingly superb bedside manner) likewise remains a truly original creation.

As noted in my previous reviews, Nurse Jackie episodes run about 26 minutes each. This is the length half-hour shows used to be back in the 1950s and '60s, before encroaching commercial interruptions reduced the number to 24 and, finally, to around 22 minutes. Those extra four minutes are critical; Nurse Jackie works great in a 26-minute format and it makes me wish more current series could return to this ideal running time.

Nurse Jackie - Season Five is presented in 1.78:1 widescreen in 1080p high-definition. Ten half-hour episodes are presented on two single-sided, region A discs, supported by optional English, English SDH, and Spanish subtitles. The 7.1 DTS-HD Master Audio is impressive and, as noted above, only those endless disclaimers and ads get in the way of enjoying the program.

Supplements include a couple of featurettes, both in high-def: "A Sober Jackie," "New to the Floor." Also included are audio commentary tracks by members of the cast and crew, a gag reel, and deleted scenes.

Still this critic's favorite continuing American TV drama, Nurse Jackie is terrific while the Blu-ray offers a spot-on presentation and is Highly Recommended. If you haven't seen it, catch up with it now.