Artist And The Model, The 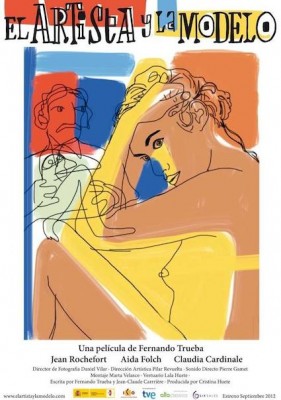 Back in 1991, Jacques Rivette directed the four-hour masterpiece La Belle Noiseuse, which may or may not be the definitive film about the artist-model relationship, but it sure feels like it. The ghost of La Belle Noiseuse haunts the early sequences of Fernando Trueba's The Artist and the Model before the writer-director establishes his particular concerns, allowing his movie to get out of Rivette's shadow. Even setting the Noiseuse comparison aside, The Artist and the Model is a minor film, but one filled with numerous pleasures. The lead performances by Jean Rochefort and Aida Folch are simple but magnetic, and they are truly the main attraction here.

Rochefort plays Marc Cros, a world-weary French sculptor who abandoned his work at the start of World War II. Now, in the waning days of the war, his wife Léa (Claudia Cardinale), who was once Marc's model, finds a new subject for him to sculpt when she sees Spanish country girl Mercè (Folch) first sleeping on the street and then later washing her legs in a public fountain. Mercè agrees to be a model, mostly to get a roof over her head, and the sculptor gives her sleeping quarters in his studio.

At first, they are on different wavelengths. Marc, dour and stoic, is impatiently searching for some sort of worthwhile idea to produce. Mercè, full of vigor and a touch of naïveté, has trouble committing to the discipline of modeling. At one outdoor modeling session, where she supposed to just stand still in water, Mercè decides to leave her pose and swim after a fish. She catches it in her hands and then tosses it at the artist's feet, giggling. All he can do is stare at her, stonefaced.

Their situation becomes symbiotic very quickly. Rochefort and Folch beautifully communicate the growing connection between the two characters in many of their shared wordless moments. Shortly, Marc is able to teach Mercè to appreciate beauty, in a well-executed scene where he shows her a quickly jotted line drawing by Rembrandt and breaks down the ingenuity and tenderness of the work. Meanwhile, Mercè's youthful vitality is able to re-energize the sculptor's commitment to his own work. In an "a-ha" moment nearly as cheesy as anything in a Hollywood film about creative people, the young woman's frustration with the modeling process causes her to strike an unintended pose that suddenly gives Marc the big idea for his sculpture.

Trueba chooses not to keep Marc and Mercè in the focused bubble of their creative process, and he peoples the periphery with memorable supporting characters. Frequent Almodóvar supporting player Chus Lampreave plays Marc and Léa's maid, who suddenly begins questioning Léa about what it's like to get naked and model. Also with the concept of naked ladies on the brain, a small band of boys starts lurking around the studio, trying to catch glimpses of Mercè. The punchline is that one of the boys is caught with a nude drawing and he replies, "It belongs to Henri. He wants to be an artist so he can look at naked women all day."

The war makes brief intrusions into the characters' lives as well. Mercè, who was working with the Underground before she took the modeling job, finds an injured resistance fighter named Pierre (Martin Gamet) in the woods and lets him stay in her room in the studio. In a bald-faced attempt to milk some drama out of the situation, Trueba contrives to have German officer/art historian Werner (Götz Otto) decide to visit Marc just then, hoping to have a last conversation so he can finish his biography of the artist before being sent off to the Russian front. When Werner leaves, Marc muses that he will probably never see Werner again. This refers to both the danger of Werner's assignment and Marc's growing suspicion that he is not long for this world.

The black-and-white cinematography by first-timer Daniel Vilar is consistently striking, but the storytelling by Trueba and his co-writer Jean-Claude Carrière is a little too sentimental and little too pat for the film to be a completely transportive experience. The actors, however, manage to make the most of a lot of little moments, such as Rochefort's delivery of a monologue about the "true story" about the creation of woman by God. In these brief, illuminating moments, The Artist and the Model feels almost magical, and that's enough to recommend the film.

The Video:
The AVC-encoded 1080p 2.35:1 image is outstanding. The digitally shot black-and-white images are consistently crisp with lots of fine detail. The contrast is excellent. The blacks are rich and never crush. I did notice some sporadic banding in the highlights of shots or in the soft portions of shots with shallow focus. It's a shame that there are these minor defects, because otherwise I would characterize this transfer as perfect.

The Audio:
We are treated to a DTS-HD MA 5.1 French audio track, with optional English subtitles. While the soundtrack sounds clean and provides a nice atmosphere, it is incredibly sedate and often just feels like a standard stereo mix. There is nothing wrong with that, considering the intimate nature of the film, but I wouldn't pop in this flick if you wanted to show off your sound system.

Final Thoughts:
A beautifully shot, somewhat syrupy drama with two excellent lead performances. The Artist and the Model doesn't get to the core of what it is to create, but it provides us with something pleasant to watch. The disc is lacking any truly meaningful extras, but the technical presentation is extremely pleasing. Recommended.