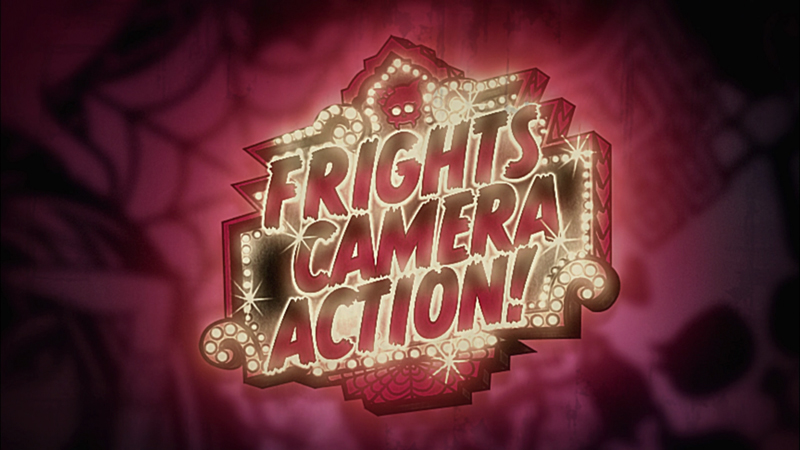 
The Movie
For those not in the know, Monster High is a line of dolls from Mattel that combine traditional fashion-doll elements with sci-fi and horror creatures. In that way, it's not your usual line of dolls like Bratz, though if you strip away the genre-movie trappings, you'd have a hard time telling the difference, as they feature super skinny young girls with big eyes wearing somewhat trampy clothing. Without a doubt, it's the fashion doll mainstays that hook girls like my daughter, who boasts a large collection of Monster High toys, but I like to think that her attraction to the darker, spookier themes indicates a future geek girl insider her.

While the dolls, with their distinct looks and monster-related backstories, have their own universe going on, that plot was pretty much limited to the constraints of the imagination of the owner of the dolls. With the cartoon movies and shorts Hasbro has brought out, undoubtedly as promotion for the toys, much like G.I. Joe and numerous other series, they've given the girls (and boys) in the series a set persona and voice, and set them in the titular school, where their teen drama gets a horror twist. This is good, if a child's imagination can run wild with the "bible" the cartoons provide. If it's just repeating, there's a definite problem.

In this film, Draculaura, daughter of the famous Dracula, has a problem with the hot new vampire movies, because they don't represent the truth about the world of vampires. While everyone else just enjoys the movies for what they are, she takes it personally. This is important, especially when she finds out that she is going to be the next Vampire Queen. Well...not exactly, but there's a lot of plotting behind the scenes, which sends Draculaura and a few of her friends back home to prepare for her coronation, which then leads to a scavenger hunt across the world to find a legendary piece of vampire treasure and set things straight. 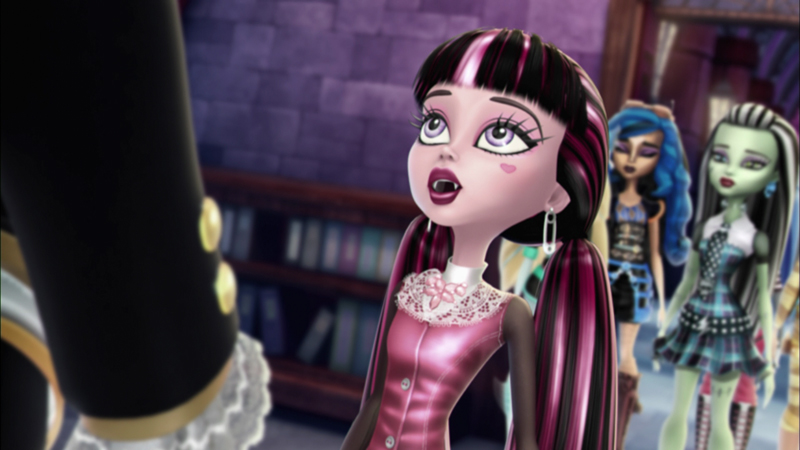 Meanwhile, back at school, the vampire movies have started a struggle between fans of the two guys who star in the films over who is cuter. While the guys don't see much of a difference, the girls go so far as to convene the Cute Court to determine a final verdict. Though there's a silliness here that's admirable, the focus on "cuteness" is problematic, just like the focus of the girls who go to Draculaura's castle and get stuck on shoes, clothes and make-up. You've got a school full of people with special abilities and powers, everything from werewolves to steampunk robots to underwater creatures, but all they care about is who likes who and whether they look cute. At least one character makes an attempt to point out the unimportance of surface looks, but it's given short shrift. Monster High is not the place to turn to for morals or life lessons, and certainly not role models.

It is however the best place to turn to for horror-related puns, this world's key identifier. They may as well be Smurfs for the way they change language to fit their culture, from turning "anybody" into "anybloody" to places known in this film as Londoom, New Gorleans and Hauntlywood. There's a campy cuteness to all this, and there's certainly a few references that breach the kids-only bubble, like a movie director named "Scarantino," but by and large, this one is aimed directly at the kiddies, and will entertain them. That especially goes for the final end run of the movie, where the plot resolution coming is more evident that a Mack truck three inches from your face. It's one of those movies where, if your child is a fan, you bite the bullet and spend an hour reading a book while they enjoy themselves. That's fine, because if you're a discerning fan of animation, you're not really going to want to watch the CG animation this film tries to pawn off as a feature film. There's little that's worse in animation than overly-glossy, texture-light CG animation, and that's exactly what you're getting here. 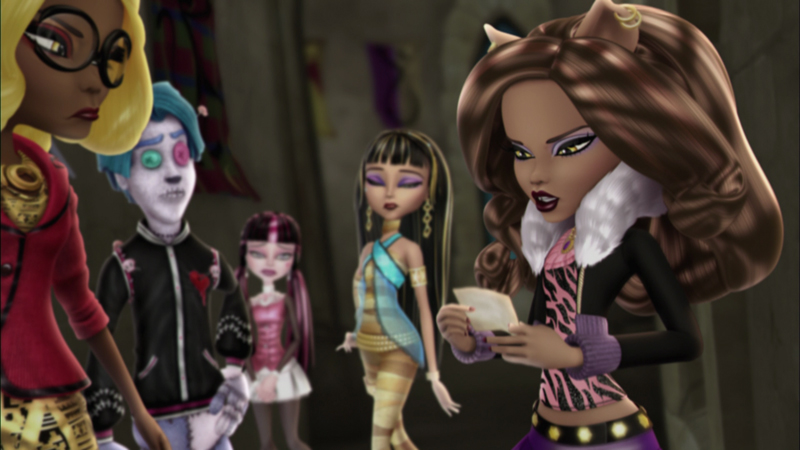 The Discs
This release includes a Blu-ray and DVD, which come in a dual-hubbed Blu-ray, held inside a shiny, holofoil, embossed slipcover. The disc features an animated menu with options to watch the film, select scenes, adjust languages and check out the extras. Audio options include English DTS-HD Master Audio 5.1 and Spanish and French DTS 5.1, while subtitles are available in English SDH, French and Spanish.

The Quality
The 1080p, AVC-encoded transfer here can't do much to help the low-budget CG animation of this film look good, as the film looks soft and light on fine detail. Color is equally compromised, while black levels aren't quite deep, and the result is an overall dull presentation. The blame most likely lies with the original production though, because if you compare the look of the shorts (see The Extras) to the main feature, the difference is night and day. That said, there are some compression issues to be seen here and there. Everyone seems to be doing their part to make this a less-than-desirable image.'re in trouble.

The DTS-HD Master Audio 5.1 included with this film fits well with the video, in that neither impresses, as the presentation plays down to its likely audience, likely expecting that young girls aren't very concerned with dynamic mixing. That's a good thing, since there's little to no action in the surrounds and the low-end barely registers. There's nothing overtly wrong with the audio but it definitely is lacking when compared to most of today's non-bargain animated releases.

The Extras
There are three short cartoons included with this film, "Crime Scream Investigation," "Games Ghouls Play" and "Monster-morphoseas," each of which is exactly 2:33 (with over 30 seconds taken up by the opening and closing titles.) Moving at a pace that's just a tad extreme, these quick hits are very focused stories, about a love triangle, cat and mouse games and an emotional time for one of the girls. Unlike the feature, these are presented with more traditional, but very detailed and stylistic animation, and the result is a better look all around.

Also included are three previews for other Monster High videos. 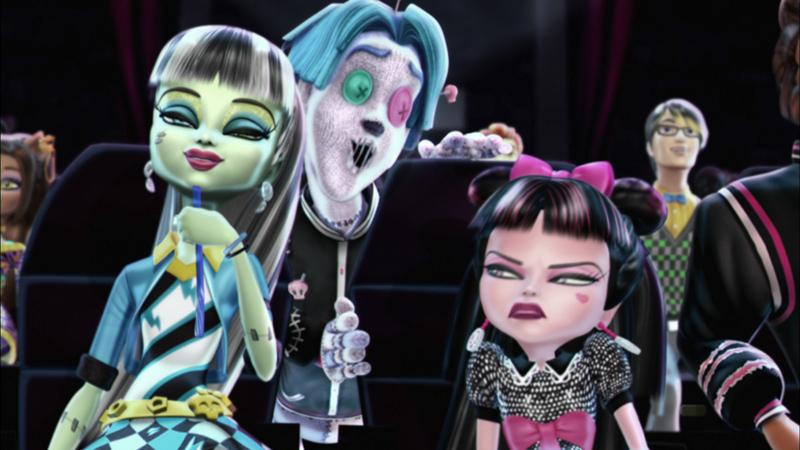 The Bottom Line
I'm not a fan of the Monster High concept, though I certainly prefer my daughter to play with monsters than to play with those awful Bratz dolls. Watching these characters brought to life in this movie, they are a touch more palatable, though the whole "shoes, clothes, make-up, boys" obsession is certainly unnecessary. Take that away, and there's a goofy charm to this world. Unfortunately, the film itself looks like a copy of a copy, and the extras, though attractively animated, are brief. If your kid enjoys the dolls, they'll likely enjoy this movie, but the DVD version is all you'll need.