Shout Factory // Unrated // August 12, 2014
List Price: $39.97 [Buy now and save at Amazon]
Review by Stuart Galbraith IV | posted August 21, 2014 | E-mail the Author
"Treasure trove" is an overused term, but it unquestionably applies to The Marx Brothers TV Collection, a revelatory compilation of the team's work in that medium. I fancy myself as something of a Marxist completist, having read most of the myriad biographies and autobiographies covering the team, and having DVD copies close at hand not only of the team's greatest films (Duck Soup, A Night at the Opera, etc.) but also oddities like Double Dynamite and The Story of Mankind. And yet again and again I found material in this intelligently, imaginatively curated and packaged three-disc set that I had never even heard of before. Some relatively familiar are highlighted, such as the Bros.' last-ever joint appearance on a General Electric Theater episode called "The Incredible Jewel Robbery" (1959), but the vast majority of the material - complete shows, excerpts from others, TV commercials and other miscellanea - will surprise and delight hard-core and casual fans alike.

Even better, some of these shows, heretofore available only as copy-of-a-copy bootlegs, are often presented via superior, official transfers licensed to Shout! Factory, the boxed set's distributor. Plus there's an invaluable booklet that helps put all of the material into context.

Sets like these tend to simply lump a bunch of unrelated material together until there's enough to fill out a couple of discs, but producers Bill Marx (one of Harpo's sons) and Robert S. Bader, with a lot of enthusiastic help, have really put together an enlightening, entertaining package of material. There's logic in the way the material is presented, and the set goes a long way to fill a huge gap of previously undocumented and under-documented Marxian history. 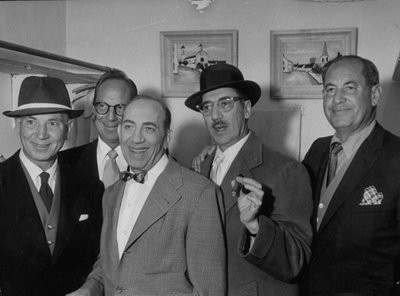 In the wake of Love Happy (1949), effectively their final film as a team (though only just), Groucho, Chico, and Harpo more or less went their separate ways. Harpo and Chico performed as a duo act occasionally, but Groucho had reinvented and reinvigorated his career with You Bet Your Life, the long-running quiz show first on radio and later on television. In their sixties and into their seventies, Chico found work wherever he could to feed his gambling addiction, while Harpo, financially secure, was more selective. Groucho, even wealthier because of the quiz show but psychologically far less secure after losing one fortune in the 1929 Stock Market Crash, took outside jobs also. Unlike his older brothers, however, Groucho was eager to move as far away as possible from his earlier, greasepainted screen persona, preferring to project more attuned to his self-educated, well-read quick wit.

The Marx Brothers TV Collection is a fascinating gathering of material. While much of it showcases the brothers individually, with Harpo and Chico still playing the same characters and doing much of the same shtick they'd been honing since the 1920s, and Groucho making amusing disruptive appearances on other shows basically as the Groucho of the You Bet Your Life years, some of the most intriguing material veers far afield from what Marx Bros. fans have come to expect.

An episode of The General Electric Theater, "The Hold Out" (1962), features Groucho's only dramatic performance on television, adequately playing the wealthy father of a teenage daughter (Brooke Hayward) overly anxious to get married. (Dennis Hopper plays her suitor.) A subdued Groucho is serious throughout the program, playing a conservative parent not far removed from the real Julius Marx. At the time his youngest daughter, Melinda, was nearly 16, and a few years later she would marry under circumstances similar to those Groucho's character here is trying to avoid.

Another real oddity is "A Silent Panic," a 1960 episode of The DuPont Show with June Allyson, featuring Harpo in his first dramatic role. In it he plays Benson, a deaf-mute working as a department store window attraction, performing as a man-sized wind-up toy. Through the department store window he witnesses a murder, then hides out in a shack manned by security guard Daniel (Ernest Truex). Dramatically, what unfolds is reminiscent of the famous vignette of the Frankenstein Monster and the old blind hermit in Bride of Frankenstein.

A General Electric Theater show, "The Incredible Jewel Robbery," is another strange one, albeit unintentionally. It pairs Chico and Harpo for a comic heist story, told without dialogue but with lots of gratingly, emphatically funny music (by Elmer Bernstein, far from his best work). Nothing about the material is really suitable for either man, particularly for Chico, he with his health declining and denied his signature phony Italian accent doesn't get to do much. Groucho makes a little cameo at the end, his appearance a network politics-mandated surprise when it was new.

Groucho fairs better in a justly famous 1955 episode of The Jack Benny Program, especially for its hilarious segment in which the notoriously vain Benny character appears as a contestant on You Bet Your Life. Even better is Groucho's 1967 appearance on an episode of The Jackie Gleason Show. Groucho and Gleason, the latter appearing as Reggie van Gleason, recreate "Mr. Gallagher and Mr. Shean," the signature song of Groucho's real-life uncle, Vaudeville comedian Al Shean, who helped the Marx Bros. break into show business. The specially tailored lyrics cause Groucho to mess up some of the words, but this only leads to some truly hilarious ad-libbing by both men, and Gleason, always the most generous of performers, sweetly and subtly steers the segment so that Groucho comes off best.

Groucho's last years were plagued with almost constant illness (including multiple strokes and encroaching dementia), but a 1970 episode of The Dick Cavett Show, one specifically highlighting Minnie's Boys, the Broadway musical Groucho's son Arthur wrote about the team's early years, finds him at the tail end of his genius, just before his public appearances became more sad than funny.

He also comes off well in a 1972 Right Guard deodorant commercial, one of a series that had comedian Chuck McCann speaking to various neighbors through a Twilight Zone-like portal in his medicine cabinet.

Perhaps most surprising, in 1976, just a year before he died, Groucho appeared in a short film (A TV commercial? The liner notes don't explain how it was used, if at all) to promote the rerelease of his 1929 book Beds. In the segment, You Bet Your Life announcer-straight man George Fenneman interviews Groucho from Groucho's actual bed, and probably due to Fenneman's deft prompting, clever editing, and the familiar surroundings, audiences are treated to one last glimpse of the Groucho of old, one far wittier and more coherent than, say, the Groucho that cameo'd on Joys, a Bob Hope special from that same year in which the great comedian's appearance was downright pitiful.

The Marxes did a lot of game shows during the ‘50s and ‘60s. The most promising show excerpted here is a 1954 episode of I've Got a Secret featuring Harpo. Harpo's secret? He's actually Chico, in disguise. Minus their wigs the two were practically identical twins and back in their Vaudeville days Harpo and Chico would on occasion stand-in for the other. (Zeppo, too, took Groucho's place at least once and nobody's quite sure which brother plays the second Groucho imposter in the famous mirror scene in Duck Soup.) Unfortunately, Chico (whom, as elsewhere, everyone mispronounces "Cheek-o," instead of the correct "Chick-o") makes virtually no attempt to imitate Harpo's miming, instead alternating between an awkwardly frozen smile and complete placidness. Further, he can't keep straight with host Garry Moore whether it's one honk of the horn for "Yes" and two honks for "No" or the other way around. Chico comes off much better in a 1955 appearance on the same show, with guest host Don McNeill and the comedian sharing a dripping, freezing-cold block of ice while the blindfolded panelists try and guess what they're holding.

Other game show material includes a side-splitting You Bet Your Life "Stag Reel" from that show's final season, the only stag reel not included on Shout!'s terrific two-volume collection of You Bet Your Life episodes; Harpo on Celebrity Golf (1961); Chico on Championship Bridge with Charles Goren (1960, with Chico all business in that segment); Groucho, a 1965 clone of You Bet Your Life produced by Britain's ITV network; another I've Got a Secret featuring Harpo (and a pre-Tonight Show Johnny Carson); and Who Said That?, a What's My Line?-type spinoff likewise hosted by John Daly. In this episode Groucho is among the panelists challenged with identifying the source of various newsmakers' quotes. What's most interesting about this episode is that voracious reader Groucho comes off only so-so. June Lockhart correctly answers nearly all of the tough questions. Who'd have thought it?

TV commercials also occupy a good portion of all three discs, most featuring Harpo in spots for Labatt's Beer, All-Pure Evaporated Milk, and Foster's Freeze. Many of these are downright surreal.

But wait, there's more! Lots. Harpo is in character on the long-forgotten TV adaptation of Frank Capra's Mr. Smith Goes to Washington, appearing opposite star Fess Parker in what would prove to be Harpo's last television appearance (airing October 1962). Also included is the only surviving episode of The College Bowl a 1951 series starring Chico in a role close to his familiar screen persona; Chico and Harpo recreate a couple of famous routines on a 1952 episode of The Colgate Comedy Hour; and Chico alone is interviewed and plays the piano on British TV, a 1959 episode of Showtime. A strange promotional film from 1958 for The Saturday Evening Post stars Orson Bean and Chico, with an apparently disgruntled Groucho making a cameo; Bill Marx narrates clips from the brothers' home movie collection, footage dating back to 1928 and featuring Charlie Chaplin, Gary Cooper, and Alexander Woollcott. Harpo is the guest star on the 1962-63 season premiere of The Red Skelton Hour, making one of his most memorable TV appearances. Another complete show teams Harpo with Carol Burnett, for "The Wonderful World of Toys," a 1961 episode of The DuPont Show of the Week, filmed in Central Park. And even that isn't everything. Shout! lists a running time of 10 1/2 hours. Surprises abound.

As one might expect, the video quality on The Marx Brothers TV Collection various tremendously, from outstanding to only fair. On the whole, however, the quality of the material presented is far better than one might have expected. The GE Theater shows, for instance, were all licensed from Universal, who seem to have provided Shout! with newly-remastered copies of these shows, which all look great. A segment from The Sunday Spectacular: Inside Beverly Hills, hosted by Art Linkletter and featuring Harpo, typically survives only in kinescope form but in this instance Harpo's wife thankfully saved the color film shot for their segment. That and other material are derived from the personal collections of various Marx families, the archive now maintained by Bill Marx. Other material was licensed from 20th Century-Fox, Candid Camera's Peter Funt, Jackie Gleason Enterprises and others, including possibly private collectors. The mono sound, English only with no subtitle options, is fine, and the set is Region 1 encoded.

The packaging is excellent. Featuring terrific cover art by Drew Friedman; each disc includes the image of one Marx brother. (Too bad that there couldn't have been five discs, if only to add Zeppo and Gummo to the mix!) The menu screens are extremely well organized and easy to navigate.

It's all extra features, isn't it? Additionally, the set comes with a Criterion-worthy booklet, 38 pages and generously illustrated in full color, that opens with an excellent essay by Robert S. Bader, editor of Groucho Marx and Other Short Stories and Tall Tales. Next follows detailed clip-by-clip descriptions with network and airdates that put each segment into historical context. (Each disc offers a mix of Complete Shows, Bonus TV Clips, and Bonus Short Films.)

One of the best DVD releases of 2014, The Marx Brothers TV Collection is a winner all the way, a DVD Talk Collector Series Title.