Adventures of Batman, The 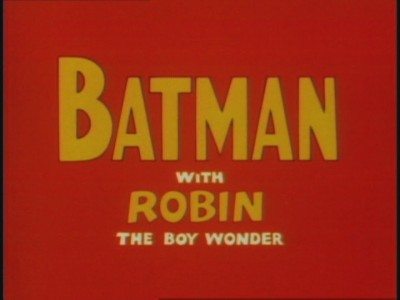 
The Movie
The 1960s Batman TV series is pretty much perfect, because it embraces a camp sensibility and has fun with the Batman universe. That it also boasts a tremendously fun cast doesn't hurt either. But somehow, when it came time to translate that fun to animation, Filmation couldn't figure out how to bring that magic to a two-dimensional Dynamic Duo. As a result the first Batman cartoon series (which originally aired as part of a pairing with Superman) is a bland, lifeless run of adventures fondly remembered by few.

The story isn't much different than the classic Batman most know, as millionaire Bruce Wayne and his ward Dick Grayson fight crime masked as Batman and Robin, with their butler Alfred by their side. Police Commissioner Gordon and his daughter Barbara (who is secretly Batgirl) are there as well. With animation vet Olan Soules giving a stern voice to the not-so-Dark Knight and Casey Kasem bringing a correct blend of youth and confidence to Robin, the show isn't far off the elements that made the live-action show so good. There's even a narrator, who just happens to be the late, great Ted Knight. Sure, the cartoonish "Bang" and "Pow" visuals are missing and the iconic song isn't here, but there are cliffhangers. It's not far off what you need for a good Batman adventure series.

Well, the first problem is the villains. The show relies on a core four bad guys, with the Joker, the Riddler, the Penguin and Catwoman present for the vast majority of the stories, including one four-way team-up reminiscent of the '60s Batman movie. Mr. Freeze makes his way into a few episodes, along with Dollman, the Mad Hatter and a disturbing-looking Scarecrow, but for the most part, the rogue's gallery is extremely limited. And instead of bringing in other established baddies from the comic or show, two rather pathetic villains were made for the series, Simon the Pieman (who combines a pastry theme with a rule system like the game Simon Says) and judge, a one-appearance wonder who gets his moniker from stealing a judge's outfit. 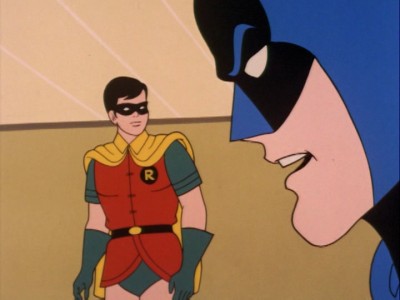 Even when the show sticks with the known villains, they are just sad representations of the characters. Of course, this was a '60s kids show, so it can't get too intense, but these villains aren't even trying. Beat up the Joker's jester-themed henchmen and he just stands there waiting to be arrested. And whoever came up with the Riddler's riddles should be embarrassed by how little sense they make or how impossible they would be for Batman and Robin to ever figure out.

Even if the bad guys were written well (and with the show's structure that would be difficult, as there's a two-part first story, broken into smaller chunks, and then a brief, almost throwaway second tale) the animation, courtesy of Lou Scheimer's Filmation, would ruin the show anyway. Everything that SNL's TV Funhouse segments parodied is found here in the cheap, reused animation oft seen in this series. If you removed every time Joker spoke directly to the camera and then threw his head back and laughed, the Batmobile zoomed down the street (at one point with Batman at the wheel, despite him not being in the scene), the Dynamic Duo flew forward like they were on dollies and Batman was in profile in the foreground while Robin stands in the background, there might be 20 minutes of animation left in the show. Maybe for the time this was fun stuff, but now it's just silly. 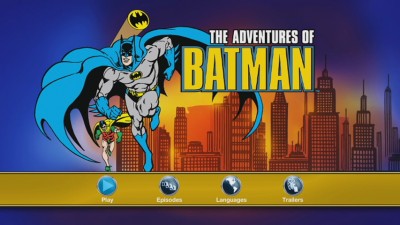 The DVDs
The series arrives on two DVDs (with the episodes in some sort of random order, based on online episode guides), which are packed in a standard keepcase with a tray for the second disc. The DVDs feature that awful static WB menu (in anamorphic widescreen) with options to play all the episodes, select shows, adjust the languages and check out the bonus content. Audio options include English and Spanish Dolby Digital 1.0 tracks, while subtitles are available in English SDH and French.

The Quality
The full-frame transfers on these episodes are actually very nice, offering strong color, a sharp image with good detail (seen in the hard-panting) and no notable concerns about compression artifacts. There are little bits of dirt throughout, but nothing too offending. The only real obvious problem is the near constant minor jitter in the image. You might not notice it unless you look for it.

Sticking with the original presentation, the mono soundtracks sound fine, with clear dialogue and sound effects and good separation from the show's somewhat generic music. This is the kind of sound that succeeds simply by not being totally messed up.

The Extras
The only extras are some trailers for other DC animated offerings. 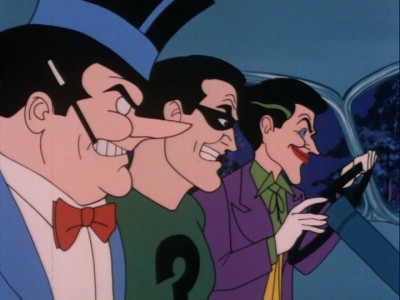 The Bottom Line
i love Batman, and will watch pretty much anything he's in, but this example of cheap 1960s kids animation is just too dull and too poorly constructed to be enjoyable. At least it looks and sounds good, though there's no real extras to expand the value. Unless you're hardcore fan with great memories of the series, or you just want to laugh at the animation, there are so many better animated versions of the Bat out there to enjoy.