Spirit: Stallion of the Cimarron 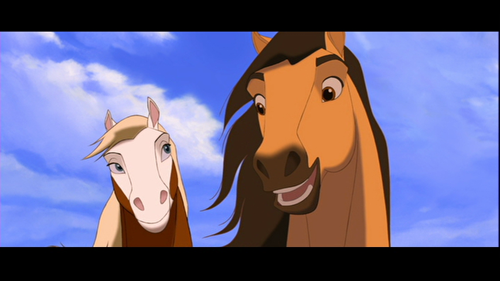 Please Note: The stills used here are taken from the DVD portion of Spirit: Stallion of the Cimarron.

Spirit: Stallion of the Cimarron is a movie about a headstrong horse who'll never, ever be tamed - he's "come into this world, wild and free," galloping through the American West "wild and untamed" - and if anyone tries to reign him in, he's "never gonna give in" (Bryan Adams' words, not mine). Gorgeously combining hand-drawn and CGI animation, the DreamWorks-produced feature comes to Blu Ray in a nice combo pack which retains the bonus features from the 2002 DVD edition.

With an uncluttered story devoid of most kiddie-movie clichés, Spirit: Stallion of the Cimarron counts as one of the more unusual post-Little Mermaid American animated features. The best decision the filmmakers made was to have the main character of Spirit not talk - while his thoughts are expressed through a narrator (Matt Damon), he communicates with humans and other horses through whinnies, body movements and facial expressions as a real horse would. Set in the Manifest Destiny-era Western U.S., the story sets up Spirit as the epitome of that untamed region. Spirit grows up a curious, fearless colt and matures into a courageous protector for his herd of wild horses. He eventually meets a foe not easily conquered, however, after coming across a group of rustlers sleeping around a campfire. The captured Spirit is taken to a nearby calvary outpost, although not without a struggle. Attempts to brand and domesticate the stallion fail, as does the effort to break Spirit in by a zealous Colonel (voiced by James Cromwell). Little Creek (Daniel Studio), a Native American of the Lakota tribe, arrives at the outpost as another captive. With the Little Creek's help, Spirit escapes - only to find that Little Creek wants to domesticate him as well. Spirit is further confounded by Little Creek's alluring Paint mare, Rain, who has a playful relationship with her caretaker. Humans and horses coexisting in peace? It's unnatural!

After doing broadly appealing stuff like Antz and Shrek, DreamWorks went out on a limb and attempted something unique for Spirit. For the most part, it succeeds. The animation seamlessly blends traditional and computer-generated techniques, making the horses appear amazingly lifelike while adding a few quirky, expressive touches like eyebrows and forward-looking eyes. Although the background imagery is said to be inspired by classic Western artists like Frederick Remington, the painterly, color-saturated landscapes ended up resembling the art of Bob "Happy Trees" Ross (it looks great on Blu Ray, however). Scenes and imagery flow together gracefully, accented with a lovely and evocative Hans Zimmer score. The soundtrack also includes several soft rock tunes by Zimmer and Bryan Adams, which are surprisingly not as gag-inducing as they may appear.

If this movie's "Spirit can never be tamed" trope tends to get repetitive, it's still refreshing to see an animated feature that isn't so dialogue driven, heavily relying on pantomime and expression to tell its story (and, thank goodness, there are no stupid pop culture gags). Pixar would do the same thing - to much more satisfying ends - with WALL-E in 2008. While Spirit is no Pixar pic, its uplifting message and gorgeous visuals make it a worthwhile escape for kids and adults alike. 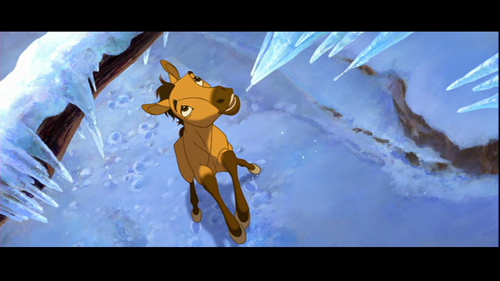 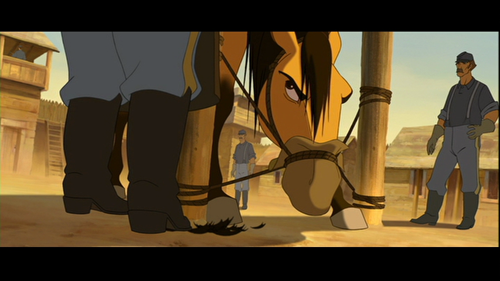 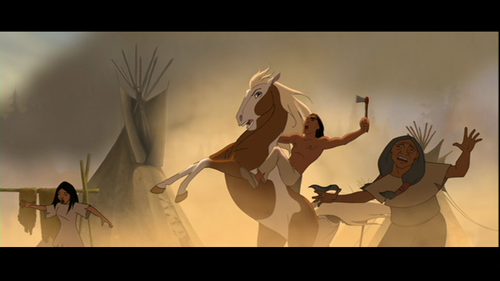 Breathtaking visual style was apparently the one thing that critics of Spirit: Stallion of the Cimarron agreed upon, so it makes sense that DreamWorks' Blu Ray sports a fantastic looking 1080p picture. The 2.35:1 widescreen image pops with vivid color, excellent detail, and zero flaws or artifacts in the source material. The disc was mastered directly from the original digital elements - giving it perhaps an overly antiseptic appearance - but overall, it impresses.

The default soundtrack is included here in a spacious Dolby TrueHD 5.1 mix. The dialogue seems slightly buried here in favor of scoring and songs, but mostly it satisfies as a pristine, lovely listening experience. The Blu Ray edition also supplies audio tracks in Latin American Spanish, Castillan Spanish, Dutch, Flemish, and French. Optional subtitles are provided in all the above languages plus English SDH and German.

The Spirit Blu doesn't include any new supplements, although it's nice that DreamWorks decided to port over the Special Features from the 2002 DVD. They include a pleasant Filmmakers Commentary from several behind-the-scenes people speaking in the same room and a handful of featurettes presented in standard definition. Learn to Draw Spirit (13:48), Animating Spirit (7:02), Songs of Spirit: Stallion of the Cimarron (9:41), Animated Storyboards (16:51) and International Star Talent (2:31) supply the usual EPK-style gloss, although there are a few interesting factoids to be found. The DVD edition also includes a DW Kids program with set-top games and favorite scenes.

DreamWorks' Blu Ray/DVD combo pack of the animated feature Spirit: Stallion of the Cimarron is a basic, straightforward repackaging of the 2002 DVD. The movie exists more for the whims of horsey-obsessed kids than anyone else, but the colorful, jaw-dropping animation looks mighty handsome in high-def. Recommended. 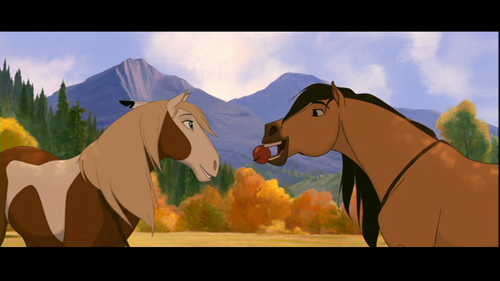 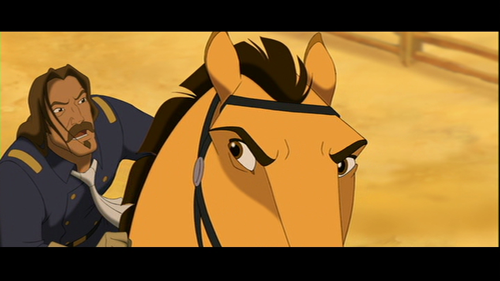