Drawing With Mark: Good to Grow / Life on the Farm 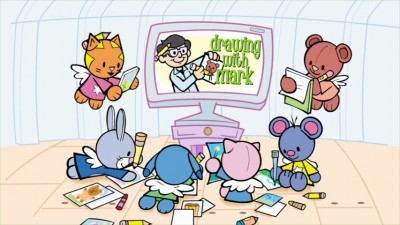 
The Movie
It's a pretty thankless task being the host of a kids show. You're bound to be the subject of mockery from adults, while the kids will age out of your demo quickly and grow weary of your act. Certainly there are new kids arriving all the time, but it's still a very fleeting bit of fame. Worse yet, if you're never too far from being considered creepy, simply by being an adult hanging out with or talking to kids.

This brings us to Mark Marderosian.

I am trying very hard to not cast any aspersions on Mark, the host of Drawing with Mark, but it's hard, as an adult, to watch him on this DVD and not think, this guy is a bit "off". It may be the act he's putting on--the standard non-threatening, wonder-filled man-child act of the kids-show host--or perhaps it's just his Massachusetts accent, but he sounds a bit like a kook. I can't knock him for the way he talks to the kids watching, as it's similar to so many other hosts, but it's still weird (especially when he's coming from "the magical attic.")

Ostensibly, as one would guess from the title, the show is about drawing, however, that makes up only half of each episode, with two drawings completed in each, including a pig and a sunflower. Marderosian is talented when it comes to drawing clean, cute images, building them out of basic shapes, but the lessons move slowly, and he uses language, like "bearing down" and "shading" that may not resonant with little ones. Simplifying the language would help, as would drawing a bit faster. The illustrations are a bit too meticulous (with unmentioned adjustments and clean-ups hidden by transitions), which could frustrate kids unable to replicate his creations. 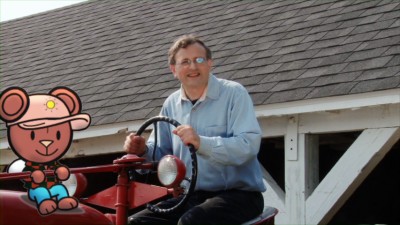 When not drawing, Mark is out on a farm in Massachusetts, teaching the kids watching some new info, with the episodes on this disc focusing on farm life, including animals and plants. His chemistry with the farmer is tentative as best, but the info shared isn't half bad. The thing is, combining this meandering view of life on the farm, especially when talking about kid-friendly topics like heirloom tomatoes and currents, with the slow drawing sessions, makes for a molasses-pace episode. And when, in the second episode, Mark says how nice it is to meet him, even my seven-year-old said, "Wait, didn't he already meet him?"

In between these segments, some cartoon interstitials fill the breach, with farm trivia, dialogue-free, point-free shorts and weak jokes. The animated bits feature a team of animal angels from the aforementioned "magical attic" who don't say a word, which again led to a bit of frustration for my daughter. For me, I wondered if this was some sort of subliminal sign of the whole thing having a religious bent, which led to me noticing a cross on the floor at one point, which further led to me paying too much attention to the potential of more signs ("He said pray!") Either way, the show didn't work for either Rizzo watching along. 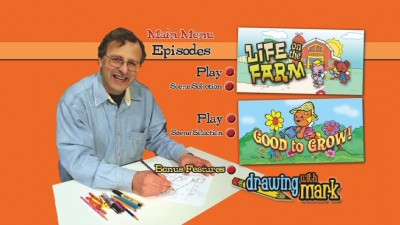 The DVD
Two episodes of Drawing with Mark are held on one DVD, which is packed in a standard-width keepcase with a folded poster. The DVD features a static, anamorphic widescreen menu with options to play each episodes, select chapters and check out the extras. There are no audio options, no subtitles and no closed captioning.

The Quality
The anamorphic widescreen transfers are clean and clear, with appropriate color, though the animation stands apart from the live-action footage. The level of fine detail isn't particularly high, and there are noticeable issues with the video quality, including awkward, jumpy edits and random color changes during the drawing scenes. There are no noticeable problems with compression artifacts or similar issues.

The straightforward audio is presented in center-balanced LPCM 2.0 tracks and it's not the finest presentation ever captured on disc. Volume is up and down throughout, though it's never overly low. Everything is pretty clear, but like the video, there are some questionable edits that result in sync issues.

The Extras
Up first is a short (3:22) lightly-animated piece that explains how to make a shoe-print horse. It's a cute little project for kids to try out that's not too complicated for them to pull off on their own. Some extended drawing scenes (6:57) follow, with Mark showing how to further develop the barn drawing started in the first episode. Beyond that, there's a folded poster with coloring and drawing activities for kids, though the glossiness of the paper might make it hard for some drawing tools. There's also a link for downloading more coloring sheets online. 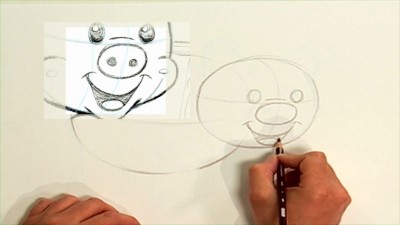 The Bottom Line
Though it may not seem like it, I did not set out to slam Drawing with Mark. As the father of a young child who loves art, I hoped it would be something she would enjoy. However, we both ended up disappointed, me more than her, as her boredom drove her away, while I dutifully watched on. Nothing about this release is really worth recommending, though Marderosian has a cute style of drawing. Hopefully there are better options than this out there for kids who want to learn to draw.