NOTE: All the illustrations and photos below are taken from promotional materials and do not represent the quality of the Blu-ray on review. 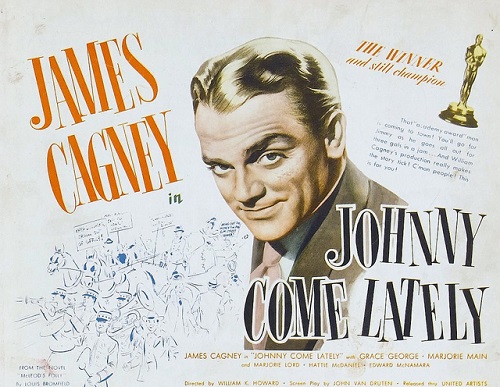 In 1943, James Cagney finished out a five-year contract at Warner Brothers with an Oscar win for Yankee Doodle Dandy. In Cagney's eyes, it seemed like a good time to strike out on his own and start up a production company with his brother William. Cagney was trying to shake his tough guy typecasting, so their first effort was a sentimental drama adapted from a novel by Pulitzer Prize winner Louis Bromfield. Johnny Come Lately got mixed reviews at the time and did less-than-sensational business at the box office, but it pretty much achieves what it set out to do. Cagney gets to be serious and thoughtful, and he only gets in two major fistfights throughout the course of the film.

From frame one, Johnny Come Lately screams its intentions as a high-toned prestige picture with ornate credits that languorously unfurl over the film's 1906 period setting. Unfortunately, that languor lingers after the credits are over. Although Johnny Come Lately eventually becomes the story of a vagabond newspaperman who revitalizes a small-town paper that is being crushed under the thumb of a political fat-cat, the film sure takes its sweet time getting to the point.

We spend a long ten minutes being introduced to good-hearted widow Vinnie McLeod (Broadway actress Grace George, in the second of her two film roles), who continues to run her late husband's newspaper at a loss, while also providing shelter and sustenance to any vagrant who comes to her for help. She is an idealist through and through, which means she's a thorn in the side of Bill Dougherty (William McNamara), the corrupt gentleman who runs their town. Dougherty tries to shut down Vinnie's dissenting voice by blackmailing her to print bogus positive editorials about himself and by hooking up his son Pete (Bill Henry) with her niece Jane (Marjorie Lord). Since Vinnie has started pawning most of her valuable belongings just to keep her paper going, she is forced to seriously consider printing Dougherty's lies.

But then (after ten long minutes), a stranger comes to town. First seen idly running a straight razor over his stubble while chuckling over The Pickwick Papers, Tom Richards (Cagney) is clearly the kind of man this town (and this movie) needs. When Vinnie warns Tom that he shouldn't hang out in the park because their town is particularly harsh on vagrants, it becomes no surprise that, a few short scenes later, our new friend is brought up in front of the judge on vagrancy charges. Vinnie offers Tom a job on her paper to save him from two months of hard labor. Tom accepts. 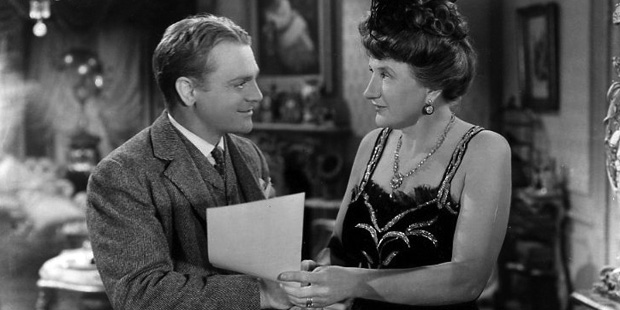 Even once the initial set-up is out of the way, the film still struggles with getting its narrative momentum going. You see, now that Tom works for the paper, he then has to acquaint himself with all of the key players in the town (many of whom we already just met) and the ragtag newspaper team, which includes adorable lush Willie (George Cleveland) and his shrewish sister Myrtle (The Wizard of Oz's Margaret Hamilton).

After Tom is done getting the lay of the land -- around the halfway point of the film -- Johnny Come Lately finally starts to hit its stride. Tom takes over the paper for Vinnie and starts publishing scathing articles and editorials about Dougherty. He starts snooping around for folks who will agree to be interviewed about Dougherty's blackmail and graft, like sassy madam Gashouse Mary (Marjorie Main, aka Ma Kettle).

The second half of the film is a lot snappier and funnier than the first half, which almost creates the feeling of the filmmakers giving up on this stuffy "prestige picture" idea and just going for what's entertaining. Cagney's undeniable magnetism keeps the first half watchable, but he seems more in his element in the raucous later scenes, where he gets to tease Hattie McDaniel's housekeeper character and sock fellas in the jaw.

Considering its mildly schizophrenic approach to tone, it's easy to see now why Johnny Come Lately was not a runaway smash, but it holds up as a better-than-average vehicle for its star. The film may have a few too many scenes where Cagney and George speak to each other in wistful tones about maintaining one's ideals, but they are not distracting enough to disqualify Johnny Come Lately from being solid fodder for a lazy Sunday matinee at home. 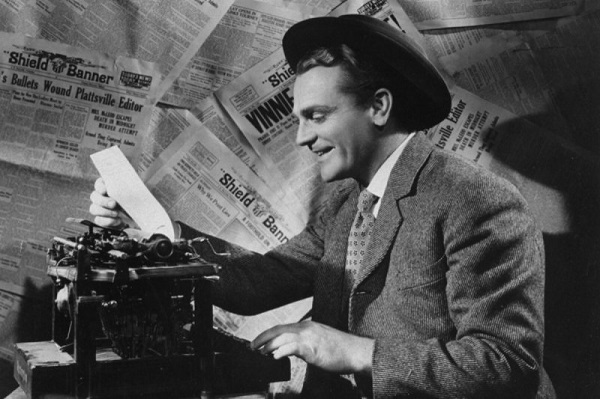 The Video:
Olive Films serves up another one of their beautiful but flawed transfers with this AVC-encoded 1080p 1.37:1 presentation. Sporting a jaw-dropping level of clarity and a wonderful range of contrast, complimented by a generous variable bitrate, the video beautifully emulates an expertly-projected screening of the film print. However, Olive typically does not go to the trouble of doing digital restorations, so the picture for Johnny Come Lately is frequently full of specks, flecks, and occasional scratches. The film elements used here are in much better shape than the dramatically beaten-up materials used for Olive's Stranger on the Prowl release, but a handful of moments do get overwhelmed by the visual interference.

The Audio:
Despite occasional surface noise and a low hum, the DTS-HD MA mono audio has surprisingly good fidelity. The dialogue is completely clear and the musical score sounds full. (The punches sound a little weak, but we should probably just blame the foley artists for that.) 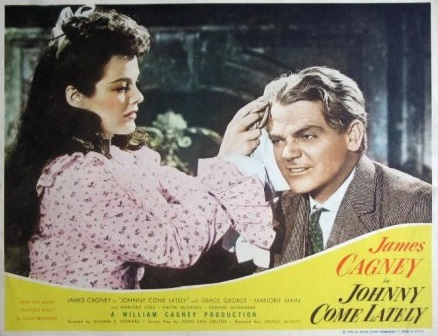