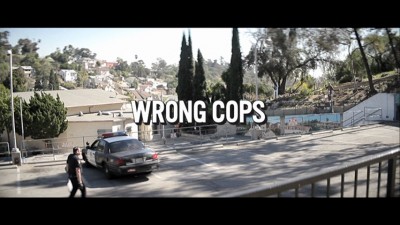 
The Show
After the joyful freak-outs that were Rubber and Wrong, writer/director/everything Quentin Dupieux has earned a spot on my list of people who i will watch anything they are involved in. The list is not long, and is pretty eclectic (including, among others, Baz Luhrmann, Eddie Izzard and Edgar Wright), but everyone on it does unique and interesting work, which is why I will always give them another chance, even when the results are something like Wrong Cop, an unusual film that meanders its way to no pay-off, but which is never boring.

The wrong cops in question are Duke (Mark Burnham), Holmes (Arden Myrin) and de Luca (Eric Wareheim), three terrible police officers who do more harm than good to the people of Los Angeles, with their activities including drug dealing, extortion and sexual assault. In the course of their "duties," they wind up harassing music-loving cop Rough (Eric Judon), debt-ridden cop Sunshine (Mark Little) and local teen David (Marilyn Manson...yes, that Marilyn Manson.) There's also a guy dying in Duke's trunk, and a few more odds and ends of plot floating around, but the general gist is that these are bad people doing bad things. 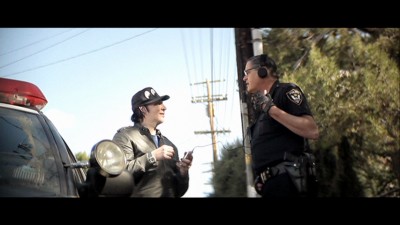 Whether the plot matters is unimportant to the film in the end. Events occur out of order, though they eventually explain themselves, but there's little to no reality at work here, with Duke's incredibly intense personality and bizarre behavior being the through-line that connects it all. One minute he's making a drug deal with a hippie film director (Eric Roberts), the next he's arguing with a transvestite, then he's involved in a kidnapping in order to teach someone about quality music. Music is a big constant, as the ever-present techno/electronica soundtrack, powered largely by Dupieux' musical alter-ego Mr. Oizo, plays a big part in the story, rather than just being a bed to the film. The fact that the characters are usually listening to the music we're hearing gives the whole thing a very meta angle, enhancing the film's oddball feel.

Though certainly a comedy, there are some disturbing, highly unfunny moments, which are heightened by being set amongst the rest of the film's ridiculousness. A stylish, almost-dramatic montage that ramps up the film's tension, in another film, would be tied to the film's climax, but here, it's almost like a reset switch, setting the comedy levels back to their original settings in order to lure you off-guard and then hit you again harder for more, darker laughs. The lack of traditional structure or plot makes it possible for anything to happen, which is why it's consistently interesting, but it's not really satisfying in the end, since nothing has really happened to change or affect our "heroes."

Burnham isn't as well-known as his castmates, but Dupieux troupe-member strikes a memorable figure, while French star Eric Judon is great as the sensitive Rough. Obviously, you know what you're getting when it comes to Wareheim (namely, insanity.) Myrin, a MADtv veteran, has been emerging of late as a darkly-comic blonde in the mold of Rachel Harris or Samantha Bee, and here she cements that role, playing simply an awful human being. There are a few notable cameos Wrong Cops, including a speech from the always-great Ray Wise, Kurt Fuller as yet another terrible executive and a less-engaging bit part for The League's Jon Lajoie, but the part that's most remarkable is Manson's, who plays an awkward teen, despite being 45. Visually, it certainly makes no sense, but he pulls it off through his acting, making it a standout role in a movie with zero subtlety. 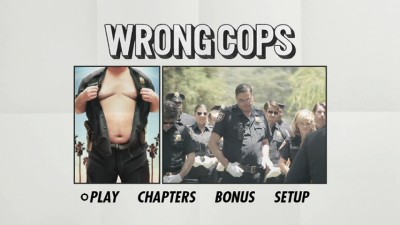 The DVD
The film arrives on one DVD, which is packed in a clear, standard-width keepcase. The DVD features an animated, anamorphic widescreen menu with options to play the film, select scenes, adjust languages and check out extras. There are no audio options, but English SDH and Spanish subtitles are included.

The Quality
Dupieux says he purposely shot this film with older lens to get a fuzzy, slightly out-of-focus look, and the result is a movie that's not entirely sharp, and the level of fine detail is good but not great, with everything looking a bit smooth, like video more than film. Color is naturalistic throughout, and black levels are decent, with no real problems with compression artifacts or other annoyances.

The Dolby Digital 5.1 audio track feels like it should have been more active, what with the film's amazing synth soundtrack, and some scenes do have nice power to them, but the rear channels don't feel as engaged as the center and sides. Dialogue is clean and legible up-front, while there's some atmospheric effects in the rear, and depending on the position music holds in the scene, you can hear that reflected in the track, which is a great touch. There's nothing too dynamic about the mix, but nothing obviously wrong either.

The Extras
The main extra is an audio commentary with Dupieux, Burnham, Wareheim and Myrin. Not a master of English, Dupieux comments less than the others, but between the four they share some production details, info on hidden meanings in the film, the secret of the characters' hair parts and sing a little Ke$ha. Unfortunately, they also do a lot of watching and enjoying, but the tone of the track is fun and enjoyable.

The first chapter of Wrong Cops (14:09) is also included, which is the beginning of the film, featuring Burnham and Manson, told in chronological order, with some moments that fill in the unseen gaps in the actual movie. There's not a lot to this that you didn't see in the feature, but it's a curiosity nonetheless. According to Dupieux, more of these are supposed to be on the way, possibly online.

There's also the film's trailer, which I am glad I skipped until after watching the film, as it gives away too many of the film's surprises. 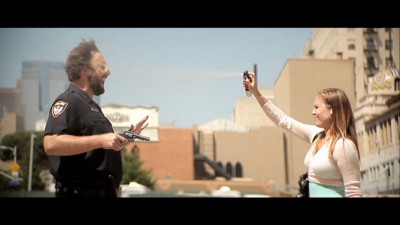 The Bottom Line
If you didn't like Dupieux' previous films, like Rubber and Wrong, you might as well just go watch the latest Scary Movie instead, because Wrong Cops holds nothing for you. This is a weird-ass flick and it takes a certain mindset to enjoy it. And even if you're in the target audience, it's not nearly as good as his other exploits, but it's definitely worth a look (and listen, for the music. With quality AV and a fun commentary, it's going to give for a momentary blast of WTF, but it isn't something you'll likely revisit.