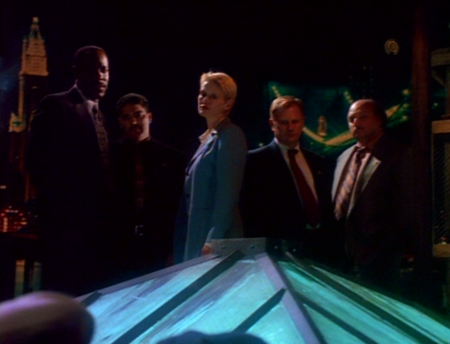 Shout! Factory continues to churn out complete-season sets for the classic cop show NYPD Blue, with the Season 7 box recently hitting shelves. This means, yes, I am a season behind as of this date, but considering how much I've enjoyed seasons 5 and 6, I intend to get caught up soon. (You can check out all of DVD Talk's NYPD Blue reviews right over here.)

While NYPD Blue might have initially made a splash for its gritty-for-TV use of profanity and partial nudity, by season 6, most of that stuff was on the back burner. At this stage, the show is better characterized as a solid, interrogation-heavy police procedural, with slightly stylized dialogue and emotionally complex lead characters. Even though the series was not strictly serialized, showrunner David Milch (who co-created the series with Steven Bochco) frequently continues character arcs across several episodes or revisits incidents from previous episodes (occasionally from past seasons) that give the world of the show a verisimilitude and richness that rewards binge-watching.

In my review of season 5, I commented that the show seemed to be consistently returning to the theme of parenthood and family during that season. Once again, with season 6, Milch and his writers seem to be working out variations on a single theme, but this time, they explore trauma and the way that people cope (or don't cope) with the tragedies both in their pasts and in their presents. To that end, three major characters die during this season. (To the spoiler-averse: be aware that I will discuss the first two deaths, since they come fairly early in the season, but I will skip the specifics of the third.)

The season opens with a five-episode arc in which Detective Bobby Simone (Jimmy Smits) gets sick and eventually succumbs to a heart infection. This is a particularly big bummer because the last time we saw Bobby, he was finally getting married to his colleague, Diane Russell (Kim Delaney). The strength of this storyline is that the writing and acting tends toward muted realism, with Bobby stuck in a hospital -- undergoing different treatments, waiting for a potential donor heart, reacting badly to surgery -- in scenes that capture both the tedium and crushing inevitability of Bobby's fate. The concluding episode of this arc, the Emmy-winning "Hearts and Souls," sometimes slips into melodrama and sentimentality but, in doing so, it gives the audience, who have spent more than four years with this character, the catharsis it needs and the rare chance to properly say goodbye to a dying friend.

With Simone gone, his place as second banana to the show's irascible lead character, Andy Sipowicz (Dennis Franz), is immediately filled by a fresh-faced kid named Danny Sorenson (Rick Schroder, looking only slightly older than he did on Silver Spoons). Simone left some big shoes, but Sipowicz is quick to pick up that this overgrown Boy Scout with surprising street smarts will fill them just fine. In the same regard, Schroder fits into the ensemble cast immediately, as though he had been there the whole time. The rapport between his character and Franz's is warm and likable, if a little more in the surrogate father-son vein than with previous partnerships.

The rest of the cast is in fine form, as well. Sharon Lawrence, as Sipowicz's wife Assistant District Attorney Sylvia Costas, gets bumped back up to the main cast from being a recurring character for about half of the season, during which her character tries to free a wrongly imprisoned man. Andrea Thompson, as Det. Jill Kirkendall, is alternately brassy and vulnerable as usual, while Delaney beautifully communicates her character's conflicting feelings about Bobby's death and the arrival of some baby-faced hunk in his place. Nicholas Turturro and Gordon Clapp, as Detectives Martinez and Medavoy, perfect their Vladimir-and-Estragon-type shtick which had frequently fallen flat in the last season, delivering plenty of humorous asides and semi-naive commentary on the goings-on of the 15th Precinct. James McDaniel, as Lt. Fancy, is given a little more to play with this season, as his character locks horns both with Sipowicz and a black sergeant named Dornan (Richard Gant) over issues of race and alcoholism -- two of the show's favorite topics.

The reception desk at the front of the squad continues to be difficult to staff, with current Principal Administrative Assistant (PAA) Dolores Mayo (Lola Glaudini) suddenly calling out sick to go perform at strip clubs during the day (she did say she wanted to be a dancer...). Soon she is dead from a heroin overdose. Though Dolores's friend and previous 15th squad temp John Irvin (Bill Brochtrup) ends up taking over her reception desk, the shady circumstances of Dolores's demise end up reverberating throughout the course of the season, down to the shocking, tragic events that occur in the final episodes.

As always, Dennis Franz anchors the cast as the emotional center of the show. His character, Andy Sipowicz, has thrown up a lot of walls to deal with the pain in his life. He is quick to fly off the handle, but Franz never fails to show the hurt, sensitive soul sunk deep beneath those layers of armor and anger. 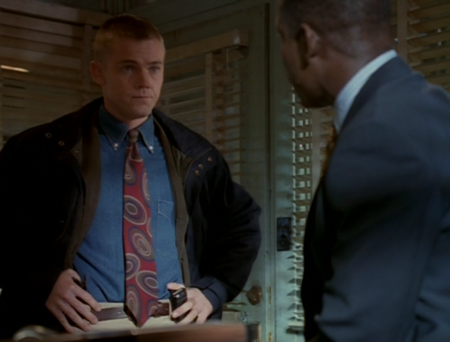 The DVDs
The 22 episodes of NYPD Blue's sixth season are presented on 6 DVDs enclosed in a standard sized keepcase.

The Video:
This batch is a relative improvement over the episodes of season 5. The standard 1.33:1 image is a little less grainy and smeary, with more vivid colors. Apart from blocky, noticeable noise during some moments on the final disc, these episodes are also less hampered by compression issues. It still doesn't look like a present-day broadcast, but it looks quite strong for its vintage.

The Audio:
No complaints in the sound department. The Dolby 2.0 stereo audio again provides a satisfying atmosphere, punctuated by the percussive musical score. The dialogue all sounds A-OK. No subtitles, but each episode has Closed Captioning.

Final Thoughts:
Season 6 features a particularly strong batch of shows from this long-running series. "Hearts and Souls" may be the episode that goes down as the all-time classic, but it's far from the only deeply affecting, expertly crafted piece of storytelling being offered here. I personally had already checked out on the show at this point in its original run, but it is tremendously satisfying to catch up on it now. Whether or not you already know these episodes, this set comes Highly Recommended. 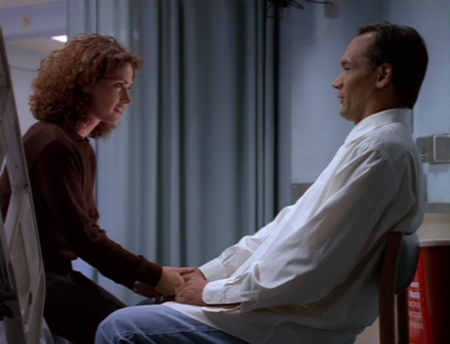