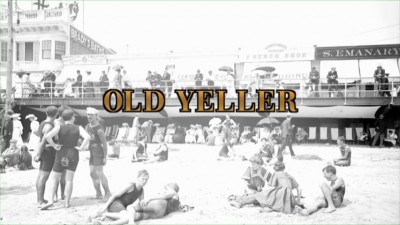 
The Story So Far…
Lewis Black has built a solid career as an angry comic through his appearances on The Daily Show and his stand-up act, and is known best for his screaming, profanity-laced rants against stupidity, punctuated with forceful finger-pointing. On home video, he's been especially productive, with four stand-up specials on DVD to date, along with some History Channel specials, and his The Root of All Evil series. DVDTalk has several reviews available.

The Show
Taking the stage at the Music Box Theater in Atlantic City's Borgata back in 2013, Black made a bit of comedy history with Old Yeller, the first live pay-per-view stand-up-special available on all major platforms. Standing in front of another of his father's late-life pieces of art, he starts out slow, talking about his parents (who are in the audience) and his role as a single man without children at the age of 65. There's none of the pointing and shouting that's made him a fan favorite on The Daily Show until he's getting into math, particularly long division. It's a peculiar way to get into the topic of healthcare in America, but it works well, and soon, Black is screaming about giving kids speed and mind-erasing medications.

Like many casino acts though, Black plays to his audience, which, based on the crowd shots, is of an older generation. As a result, there's a lot of bits about how things were in an earlier era. When he says "rabbit ears" at one point, in reference to the old-school antennas that were once found atop televisions, the audience says the words with him reflexively in recognition of remembering something from the past. It was a bit depressing, because there wasn't really a joke there. It's just a "remember when…" As Black keeping pointing out things from the past to the young people in the audience, and joking about websites, Facebook, cellphones and Farmville (topics he covered last time out) he seems older and older, which is weird for someone who has watched Black play the role of the cool, yet angry uncle for so many years. If the transition works for him and he's successful at it, who are we to tell him not to change or adapt. 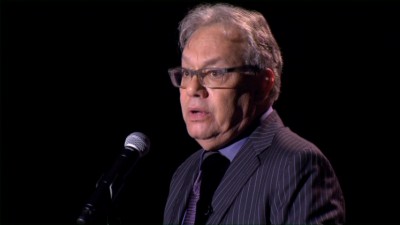 The previously vitriolic Black is still present in parts, particularly in the back half of the special, as he gets into the problems with Democrats and Republicans. Unfortunately, just as he gets going, talking about a news story with an Indiana lawmaker who refused to recognize the Girl Scouts' anniversary because of its "radical" agenda, it's all over. He spent so much time on the technology he struggles with, like Spotify and Twitter, earning more sympathetic laughter from his peer-filled audience, that he barely has the opportunity to satisfy the political-comedy fans who got him here. Hey, perhaps Bill Hicks wouldn't have been the same guy we loved if he lived this long. 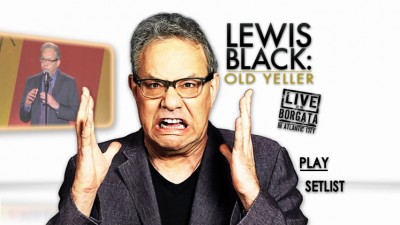 The DVD
The special arrives on one DVD, which is packed in a standard-width keepcase. The disc features an animated, anamorphic widescreen menu with options to play the film and select from the setlist. There are no audio options and no subtitles, though closed captioning is included.

The Quality
If this special was presented solely from the close-up center camera, it would be golden, as the colors are bright and vivid, the level of fine detail is sufficiently high (check out those pinstripes) and black levels are good, resulting in a fine-looking image, but the side and wide cameras look soft, with somewhat muted color and some unfortunate pixelation that shows up harshly along Black's mic stand and the edge of the stage. Overall though, it's eminently watchable.

The Dolby Digital 5.1 audio track is a solid track for a stand-up act, putting you in the midst of the audience, with their laughs in the sides and rear, while Black is clear and distortion-free in the center channel. Nothing to complain about here.

The Extras
Perhaps the documentary two DVDs ago was meant to last us a while, because there's nothing here at all. 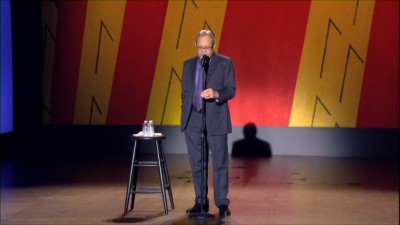 The Bottom Line
Watching this special, one unfortunately gets the feeling that Black is settling into a niche as the angry old comic, raging against today, while pining for yesterday. There are still vestiges of the disbelieving iconoclast that he was when he first made his mark, but when taken in combination with his previous two specials, that seems like something he's transitioning away from. The DVD is presented with decent quality, but offers zero in terms of bonus content, so you're better off with one of his earlier specials.