To tell the story of Veronica Mars one has to include how the film came to realization. For the sake of full disclosure, my wife and I arrived to Veronica Mars shortly after the series' cancellation, a ‘binge viewing' where she liked the nature of the protagonist's sort of outsider dynamic within her environment and I was impressed by the dialogue that its show runner Rob Thomas was putting together. As a fan of Thomas' other short-lived show Party Down going through Veronica Mars was an easy and pleasant adventure.

Sadly Veronica Mars only lasted three seasons, yet there seemed the characters lacked a certain bit of closure that it did not have the opportunity to execute. Then the Kickstarter happened, a crowd-funded campaign for the show to have a feature film installment. It seemed to make sense as Thomas and the fictionally nominative Veronica, Kristen Bell (Forgetting Sarah Marshall) were equally willing to make it, even if Warner Brothers was not willing to fund it. Setting a modest goal of hoping to raise $2 million within 30 days, the response was staggering, with the project not only meeting that goal within 24 hours of its announcement but receiving almost $6 million during its month-long window, but the fan reaction was such that it was likely going to make for the best movie possible for fans of the show.

Thomas co-wrote the screenplay with Diane Ruggiero and directed the movie, which finds Veronica in New York interviewing for a job at a law firm. She receives a phone call from Logan (Jason Dohring, Deep Impact), asking for her help as he has been implicated in the death of his girlfriend. Veronica returns to Neptune California (where the show was set), to help Logan, just as Neptune High is about to commemorate the 10th anniversary of the high school class the "Mars-iverse" graduated from. Not only does Veronica want to find out the killer of Logan's girlfriend, but she also struggles with trying to escape Neptune and get back to New York and to her boyfriend Piz (Chris Lowell, the show reprise their roles for the movie. Veronica's Dad Keith (Enrico Colantoni) and her friends Mac (Tina Majorino), Weevil (Francis Capra) and Wallace Percy Diggs III) come back, along with other popular characters/Thomas stock participants like Dick (Ryan Hansen) and Vinnie (Ken Marino). Alumni of the show who have become more visible in the subsequent years also appear and play varying roles in the film, whether it is Gia Goodman (Krysten Ritter) or Neptune police detective Leo D'Amato (Max Greenfield). The film's 107 minutes are a virtual reunion for devotees and contributors. 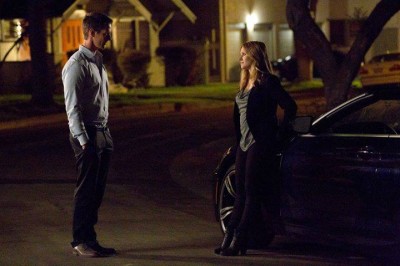 With that said, there are two ways to look at the Veronica Mars movie: the former, which is from the perspective of an admirer and married to someone who gave money to the Kickstarter. Then there is the latter, within the vacuum of looking at the film and nothing but. And looking strictly at it from the latter, Veronica Mars the movie is not that different from the show which preceded it. It is an extended episode with some cameos thrown in, with the latter being gratuitous at times (looking at you, Dax Shepard and James Franco). The subplot about police corruption in Neptune was needless as well, but I guess I understand the need to incorporate it to bring some value to the Keith Mars character. Otherwise you could boil an egg, come back and not miss much as to what Veronica Mars is trying to say.

However, it was written and told with the fans in mind, and the desire to close a book of sorts on this chapter within the work of Bell and Thomas. If you watched and/or liked the show in any way, the film gives you as much of that as you could hope for, plus a little more here and there in Gia's fiancée, played by Martin Starr. Or Gaby Hoffmann, playing the stalker of Logan's deceased girlfriend in a somewhat humorous turn. It is very safe to say while it is not the best film, it is something that will be enjoyed with its nostalgia and its mild sense of finality.

There is another perspective to the Veronica Mars movie in that it has a certain level of legacy that remains to be told. Since the campaign came and went, notable filmmakers like Zach Braff (Garden State) and Spike Lee (Oldboy) have started their own crowdfunding campaigns for movies to be made, to say nothing of the more independent, lesser known filmmakers who have had campaigns of their own. How crowdfunding fits into the larger movie landscape is still to be decided and some kinks still need to be worked out (some funders are receiving refunds because of the less than stellar roll-out of the film to digital platforms via Flixster and UltraViolet), but the overall execution of Veronica Mars as a movie is encouraging.

So yeah, there are a few things going on outside of Neptune that make Veronica Mars a milestone in one way or another. Fans will love it, novices will be unimpressed, but that a production of this nature came to eventually see the light of day despite years of rejection is something that Thomas, Bell and those who wanted to see such a film should receive some praise for.