Summit Entertainment // PG-13 // April 29, 2014
List Price: $39.99 [Buy now and save at Amazon]
Review by Stuart Galbraith IV | posted May 17, 2014 | E-mail the Author
Normally I avoid high-concept, CGI-driven spectacles like The Legend of Hercules (2014) and anything directed by Renny Harlin (Cutthroat Island) especially, but in this case I made an exception. For starters the bar is set very low on a picture like this. A movie about Hercules immediately brings to mind the peplum/sword-and-sandal genre of roughly 1957-1965 when, following the international success of Hercules (1957), Italian filmmakers went to town, producing literally hundreds of similar films over the space of less than ten years, including at least 19 more official Hercules movies.

Most of these pictures were cut-rate and uninspired, but the best ones, like the later Spaghetti Western genre that overnight supplanted it, occasionally remain quite enjoyable. (Goliath and the Dragon, Hercules in the Haunted World, Hercules Against the Moon Men, and The White Warrior are a few good/goofy examples.)

The relative simplicity of their plots and characterizations, combined with their aspirations for epicness combined with wild fantasy elements would seem well-suited for a high-concept, CGI-dominated movie today, especially one that could integrate the advantages of modern technologies with the core elements of what made the pepla of 50 years ago so appealing in the first place. MGM and Paramount apparently think so; they've teamed up for yet another Hercules movie due in July.

To its credit, The Legend of Hercules gets some things right. Thankfully, it avoids the temptation of a campy approach, taking the material seriously, if a bit too seriously at times. The CGI effects are good in some respects but not others, and the aggressive use of 3-D, maybe more than any film since The Charge at Feather River (1953) is sometimes amusing and even visually arresting.

Unfortunately, The Legend of Hercules is overwhelmed into a state of near-incoherence with maddening direction straining to keep up with supposed contemporary tastes. The resulting film plays less like fantasy-melodrama than the linking segments of a modern video game.

Lionsgate's 3-D Blu-ray delivers impressive video, audio, and some fairly eye-popping 3-D effects, but the obsessive cutting and thirst for constant spectacular action quickly wore me out, and the lack of a compelling story or appealing characters made me lose all interest halfway through. 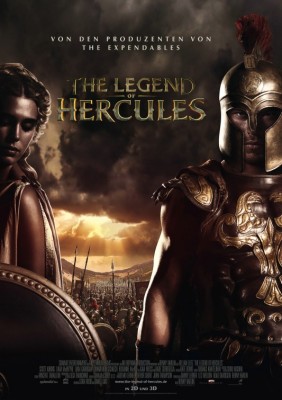 The movie does a decent job adapting the original Greek mythology. Power-obsessed Tirynian King Amphitryon (Scott Adkins) defeats King Galenus of the Argos, seizing the kingdom and its riches. But Queen Alcmene (Roxanne McKee) is sick of her estranged husband's warmongering, and prays to the goddess Hera for guidance. Appearing before her, Hera prophesizes that she will bear the son of the Zeus, called Alcides on earth but known among the gods as Hercules.

Twenty years later (inexplicably, with McKee looking not a day older) the adult Hercules (Kellan Lutz) is in love with Cretan princess Hebe (Gaia Weiss) but Amphitryon promises her hand to Hercules's older (step-) brother Iphicles (Liam Garrigan) in a politically-expedient arranged marriage. Hercules and Hebe try fleeing but are captured and Hercules is sent on a suicide mission led by Captain Sotiris (Liam McIntyre) to Egypt.

Originally conceived as Hercules: The Legend Begins (shades of Remo Williams: The Adventure Begins!) the film was reviled by critics, earning a pathetic 3% favorable rating on Rotten Tomatoes. But what's wrong with The Legend of Hercules seems widely misunderstood. The problems really aren't so much conceptual but in their execution. The picture might have worked wonderfully well, full of excitement and lively melodrama and spectacular action. However, the film's headache-inducing execution, embracing as it does everything that's wrong with high-concept movies today, dooms it from the start.

The movie opens with Amphitryon's invasion of Argos. It looks like a video game, one with which the type of heavy metal scoring common among such games would not seem inapt. The cutting is chaotic to the point where, instead of invoking, say, the chaos of battle as in Alexander Nevsky (later shrewdly copied by Orson Welles in Chimes at Midnight), this opening sequence is all sound and fury signifying nothing. Harlin embraces every high-concept/CGI cliché, including tiresome action momentarily "frozen" in place, so that viewers can glimpse freeze-framed moments of close combat. The incessant cutting, with rarely a shot lasting more than two seconds, disorients the viewer; spatial relationships go out the window. Individual shots are often visually quite handsome, but everything is onscreen so briefly they can barely register before 20 more push through the line.

Almost all such films use CGI technology badly, and this is no exception. CGI effects work best when used subtly, an adverb all but unknown to modern filmmakers. Swooping aerial shots gazing at impossibly huge throngs of computer-generated "extras" trampling impossibly huge computer-generated "sets" only draw attention to the effect. Rare is the moviemaker integrating the real and the imagined so seamlessly that the effect is noticed only upon reflection. Harlin should not be singled out as practically everyone adopts this former style, from J.J. Abrams to Peter Jackson. Instead of inspiring awe with such effects they merely inspire passive, generally uncritical if begrudging acceptance.

But the truth is the big-scale epics of the 1960s, with their 1:1 scale sprawling sets remain far more impressive to the eye than a million CGI Greek warriors swarming over 30-mile wide, 200-storey tall fortresses ever could. The 1900-circa Beijing sets in Samuel Bronston's 55 Days at Peking (1963), for instance, are still an amazing sight to behold because it's so clearly full scale, reconstructed to perfection on a Spanish plain, no less. Ballooning production costs preclude such luxuries in films today, despite their enormous budgets, but a more judicious use of CGI could make up the difference, if only it were done right.

Renny Harlin isn't up to the task. For cryin' out loud, even the moon can't sit still in several shots; it, too, zipping across the nighttime sky like a 767. Hercules's incessant, caffeine-driven need-for-speed quickly wearies the viewer, serving the film or its audience not at all. And way too many exteriors are accomplished via obvious green-screening, with the lighting and CGI backgrounds failing to convince.

Another problem is the charisma-free cast. The Italian pepla of half a century ago famously tapped bodybuilders like Steve Reeves, people with decidedly limited acting ability, as Hercules. But the best of these musclemen had a certain charm peeking through all those pecs. Initially, these mostly-Italian movies appealed to general audiences. Today, it's probably fair to say the genre's core audience is gay men drawn to these musclemen and their oddball adventures, with a minority of straight men and women who appreciate them for other reasons. However, for both sets of audiences, that appeal remains contingent upon the actor playing Hercules. Those older films featuring a Hercules who can act or at least exhibit some personality beyond his muscles are better-remembered than those with bland leading men. Here, fashion model-turned-actor Lutz has the muscles but none of Hercules's heroism or screen presence.

The Legend of Hercules is a missed opportunity particularly in making Hercules a truly heroic character. There's precious little of Hercules demonstrating his superhuman strength or using it much in battling the bad guys, nor does the movie take advantage of modern technologies to show him fighting the kinds of dragons and other fantasy creatures earlier Italian films attempted with chicken wire and papier mâché. In one scene Hercules battles an incredibly phony-looking CGI lion, one no more real than the man-in-suit felines of the ‘60s.

Filmed in REDCODE RAW 3-D, The Legend of Hercules looks really good on Blu-ray 3-D, the CinemaScope image full of depth, sharpness, and rich colors, though the movie by design is often dark with overcast skies and desaturated color. The 7.1 DTS-HD Master Audio similarly is full of directionality, with the surround speaker activity at times threatening to overwhelm the dialogue. (Spanish Dolby Digital 5.1 and English 2.0 stereo mixes are also included, along with subtitles in those languages.) Downloadable and UV copies are also provided. The disc is region A encoded.

Value-added material is limited to a humdrum commentary with Lutz and Harlin, and a 15-minute making-of featurette.

Not quite as terrible, nor necessarily as bad for the reasons as most critics contend, The Legend of Hercules is, nonetheless, a mind-numbing disappointment. Too bad, as there's the germ of a decent movie in there, lost in the CGI-frantic spectacle. Rent It.